Ebenacobius pedi gen. et sp. nov. can be distinguished by the following combination of features: claws simple, prothorax and elytra similarly pale brown, with two longitudinal dark bands on prothorax not reaching apical margin and glabrous elytra ( Fig. 3C View Fig ), lacking a visible row of recumbent setae on interstriae. This species shows a peculiar body of penis, regularly widening from base to apex in dorsal view, with the apex truncate ( Fig. 6L View Fig ). This species is very close to E. tsonga gen. et sp. nov., but the latter species shows distinct rows of setae on interstriae 5–10 of elytra. Ebenacobius pedi is also closely related to E. hippopotamorum Haran gen. et sp. nov. but in the latter species the scutellar shield and the base of first interstriae is dark brown and the dark bands on prothorax are generally reaching the apical margin ( Fig. 3E View Fig ).

This species name is dedicated to the Pedi people, inhabitants of the northern provinces of the Republic of South Africa. These peoples share this land with the Tsonga peoples, as do E. pedi gen. et sp. nov. and E. tsonga gen. et sp. nov., apparently on the same host plant.

PROTHORAX. Wider than long (W:L ratio: 1.37), widest near base, slightly narrower there than elytra at humeral angles; sides straight or slightly convex, moderately converging apicad, abruptly converging in apical 1/5, apical constriction narrower than width of funicle at apex; integument densely punctate, space between punctures smooth, shiny, at most 2× wider than diameter of punctures; setae of larger punctures shorter than diameter of punctures in the central area; prosternal process oriented forward, only moderately exceeding the level of procoxae, forming a spatula in dorsal view.

TERMINALIA. Body of penis elongate (W:L ratio: 0.40), 0.7 × as long as apodemes; sides straight and regularly widening apicad in basal 3/ 4 in dorsal view, widest near apical 1/4, convex in apical 1/4, apex truncate; in lateral view curvature stronger in basal half, width expanding from base to apex ( Fig. 2A View Fig ).

Females can be distinguished from males by their rostrum which is less downcurved in lateral view, almost straight in apical half and by the absence of prosternal process between procoxae.

Ebenacobius pedi gen. et sp. nov. is morphologically remarkably closely related to E. tsonga gen. et sp. nov., the two species are only distinguished externally by subtle morphological differences. The contrasted shape of the penis body between these species and the genetic distances allows, however, to distinguish them unambiguously ( Figs 6 View Fig , 8). The two species were collected in sympatry in two distant localities and were observed on flowers of the same plant in one of the two sites (JHAR00838). These species might represent another case of sister-species sympatric assemblage, as it has been described in other Derelomini ( Franz & Valente 2005; Haran et al. 2021).

The specimens from Mbombela (data JHAR00838) were all collected on flowers of Acokanthera oblongifolia (Hochst.) Codd ( Apocynaceae ) around 5 p. m. Despite repeated attempts, specimens were not observed on these flowers earlier or later in the day. Such timed phenology on flowers has been described in other plant-weevil pollination mutualism ( Auffray et al. 2017; Saunders 2020), suggesting that Acokanthera might constitute the host plant for E. pedi gen. et sp. nov. rather than only a refuge. This species was collected using light traps and by sifting leaf litter. Adults were collected in February, April, July and December. 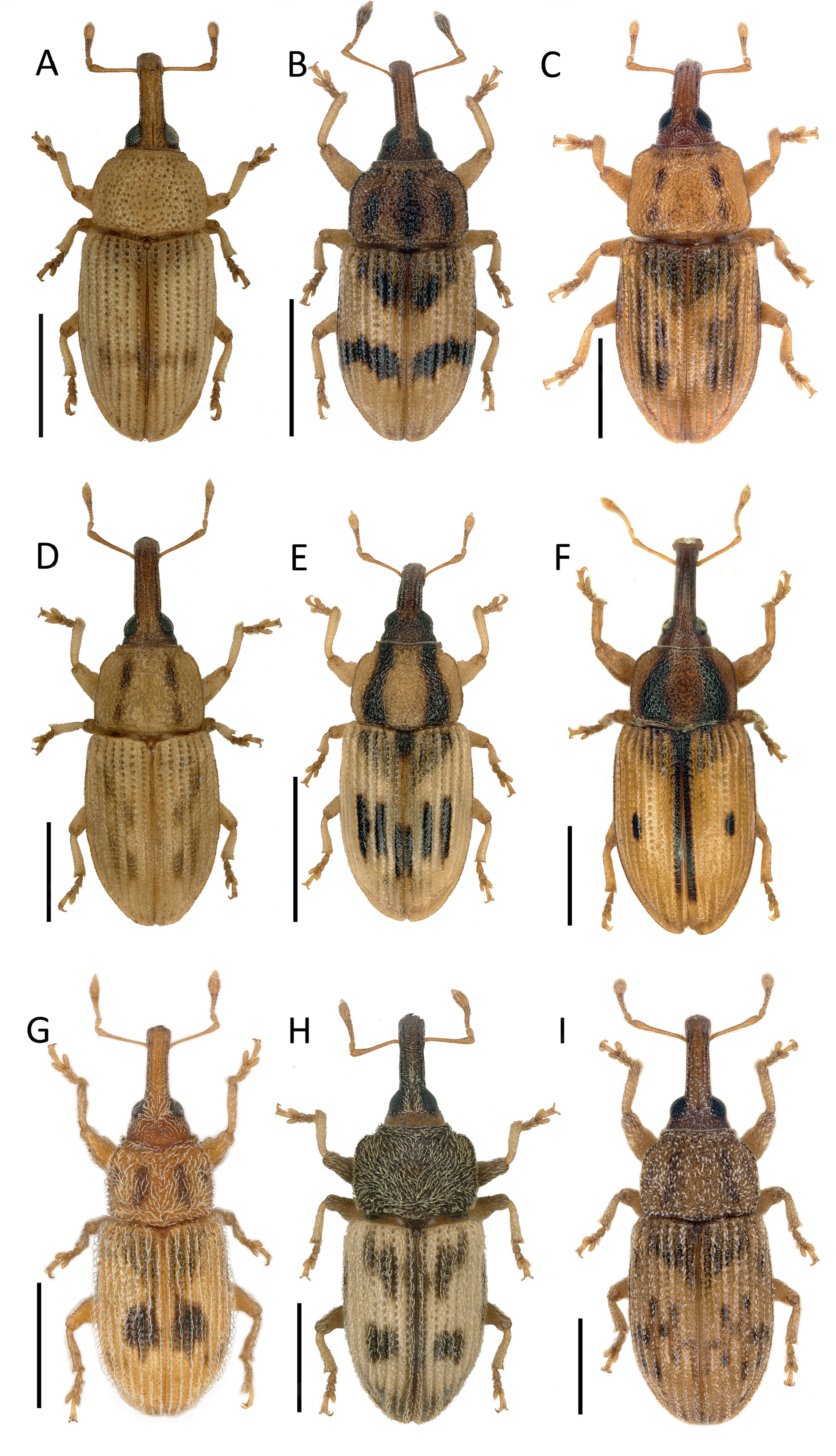 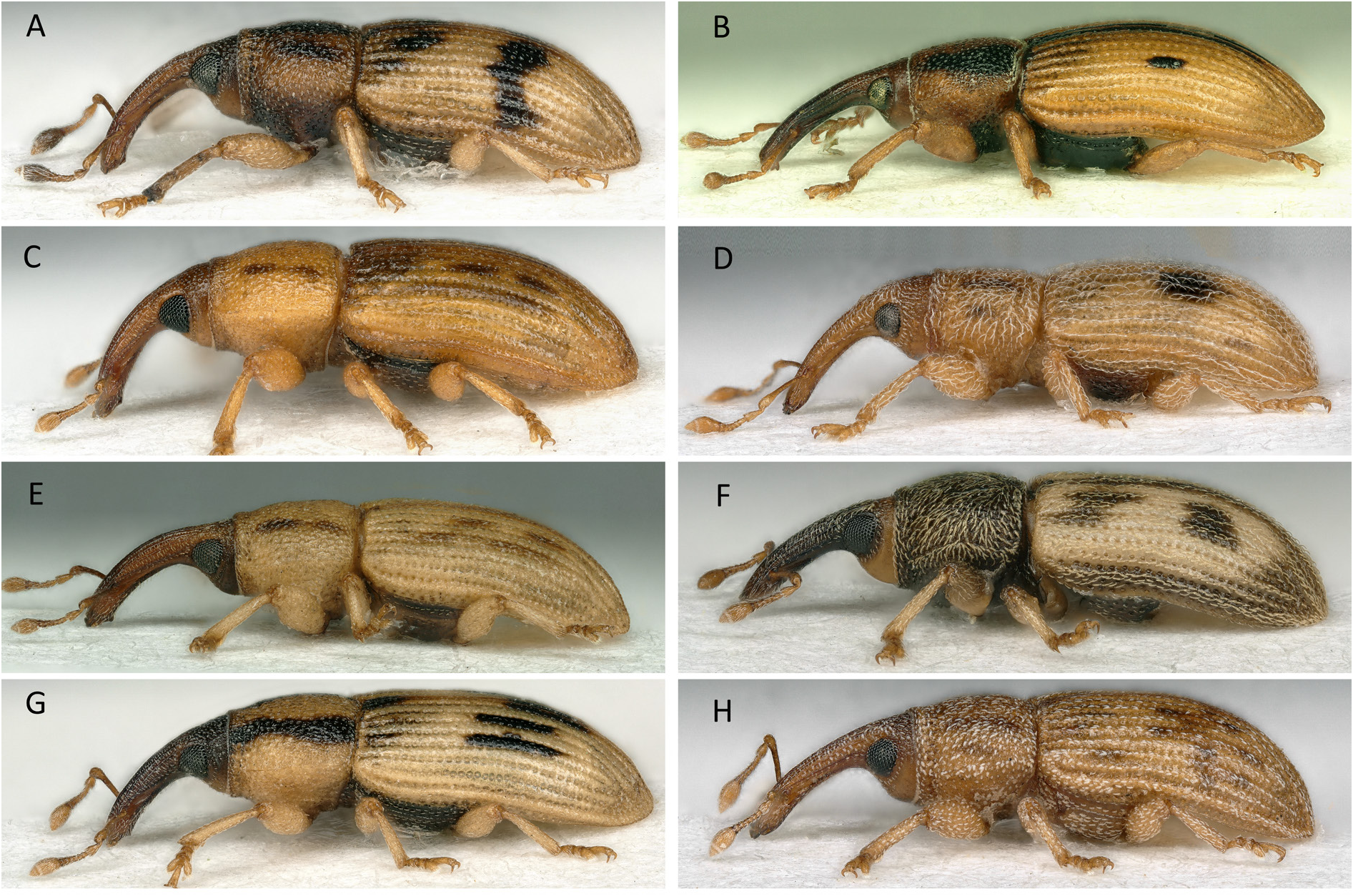