Wing color, dorsal surface: Ground color of both wings uniform light orange, hindwing slightly lighter at the anal margin and costa, fringe of both wings black with scattered lighter scaling between the veins; Wing color, ventral surface: Ground color of both wings lighter than dorsal surface; forewing lighter towards inner margin; apex and costal margin with variable, discontinuous black scaling, distal margin with variable black, slightly elongated triangular markings at the end of the veins, diminishing in size from the apex, fringe black with lighter scaling between the veins. Hindwing margin with slightly elongated black triangular markings along the veins.

Head: As in male.

Body: Coloration as in male.

Genitalia ( Figs. 22, 23 View FIGURES 22 – 26 ) Corpus bursae slightly elongated, with two small, invaginate, pointed signa, one longer; ductus bursae short, funnel shaped, bends strongly to left when viewed ventrally, sclerotized with transverse striations, and flat when viewed laterally; ductus seminalis is attached to the right side of the ostium bursae, viewed ventrally; ostium bursae consists of two plates when viewed laterally, the ventral plate larger than the dorsal, slightly flared, round, and bent ventrally; on the right side of the rim when viewed ventrally, is a strongly sclerotized horseshoe-shaped structure; the dorsal plate with amorphous pieces of sclerotized scaly material around the rim in some specimens.

Variation. There is some individual variation in the length of the black marks between the veins on the ventral surface, sometimes absent, vestigial or slightly longer. Also, some specimens lack completely the vestigial black scaling on the ventral abdomen between the segments ( Fig. 4 View FIGURES 1 – 15. 1, 2 ).

The holotype and allotype are deposited in the MZFC. The deposition of the paratypes is indicated by the acronyms or collector.

Etymology. This lovely species is named in honor of Ms Jimena   Llorente, wife of the second author.

Distribution. ( Fig. 27 View FIGURE 27 ) The species is found in the coastal areas of Guerrero and Oaxaca west of the Sierra Madre del Sur on the Pacific slope.

Habits and habitat. Va rga s et al. (1991, 1994) described the allotype locality, Río Santiago in Sierra de Atoyac, Guerrero: An area at the base of the mountain between 660 and 700 m, somewhat disturbed by coffee plantations which originally was an evergreen tropical forest with riparian vegetation along the rivers Santiago and Las Delicias. The climate is Aw 2 (w), very humid with annual precipitation more than 1000 mm. The combination of forest and coffee plantations creates partially shaded microhabitats. At 900 m and joining this locality is the Puente de los Lugardo.

The locality of Azulillo (Candelaria Loxicha, Oaxaca) belongs to a region known as evergreen and semi-evergreen tropical forest, which also contains disturbed cultivated areas, with riparian vegetation along the Río Candelaria. The altitude is lower, between 370 and 500 m, but with the same climate.

M. jimena   is on the wing early in the morning between 0800 to 1000 h, and again after 1400 to 1630 h, often in mist or drizzle. They rest on the undersides of large leaves with wings outspread and antennae together. They fly with a mimic unidentified species of Heterocera. The flight is weak and difficult to see in the shade, generally above 3 meters. They fly for periods of 10 seconds before alighting.

Space and time. Spatial and temporal barriers relating to perching behavior have been discussed for Neotropical riodinid butterflies ( Callaghan, 1983; Hall 1999; Hall and Harvey, 2002 b). In this case it is shown that closely related congeneric riodinid butterflies often perch at different times and microhabitats ( Callaghan, 1983). If two populations are characterized by perching in different times and localities, presumably this would be an effective potential isolating mechanism, thus reducing their interbreeding potential. This is true in the case of Mesene jimena   sp. nov. and M. margaretta   . Mesene jimena   sp. nov. is active during the early morning and late afternoon, and under inclement weather conditions, whereas M. margaretta   males perch in treefalls and along trails in the early afternoon in sunflecks. DeVries (1993) reports activity between 0900 and 1100 h in Costa Rica. In Colombia one of us (CJC) has observed males perching between 1100 and 1400 h. In Mexico, they fly from 900 to 1700 h, peaking around 1200 – 1430 h (Llorente and Luis-Martinez, pers. obs.).

Biogeography. Another indication of species status would be a distribution range corresponding to an area of high endemism among butterflies, as well as other organisms. It has been suggested that there is a high correlation between riodinid species and recognized regions of endemism, particularly in the Amazon ( Hall and Harvey, 2002 a). The Pacific region of Mexico shows the greatest amount of endemism in the country (paleo and neo-endemism). The northern limits of the distribution of the Neotropical fauna confronted with strong barriers on the Mexican Pacific slope favor speciation. In the diverse tropical and mesophylic mountain forests of this region endemic

1. The variation on the extent of the black and white apical markings on M. margaretta   appears to be within populations and not between them. In the northern coastal range of Venezuela (Cordillera de la Costa) in the Provinces of Aragua and Carabobo, both phenotypes shown in Figs. 9–14 View FIGURES 1 – 15. 1, 2 fly together in the same habitat, from 200 to 1550 m. (Juan C de Sousa, pers. com.). Similar differences are found in populations at Cali, Valle del Cauca and Villavicencio, Meta, in Colombia.(CJC, pers. obs.). In El Salvador, the M. margaretta   population shows a considerable reduction of the black forewing markings; however there are also individuals with normal markings. In Mexico and Guatemala, the M. margaretta   populations ( Figs. 5 – 8 View FIGURES 1 – 15. 1, 2 ) show no significant variation.

subfamilies, genera, species and subspecies are found that characterize the distinct provinces which drain into the Pacific. These provinces are South Sonora, Mexican Pacific Coast, South Sierra Madre Occidental, the West of Transmexican Volcanic Belt, Balsas Basin, and Sierra Madre del Sur (Morrone et al., 1999, 2002; Espinosa et al. 2000, 2008). Morrone (2001: 40 – 42) includes the area where Mesene jimena   sp. nov. is found in the biotic province called “Provincia de la Costa Pacífica Mexicana”, and he mentions numerous endemics found there. The 40 characteristic taxa that Morrone enumerates for the Provincia de la Costa Pacífica Mexicana include taxa from the south of Sinaloa y Michoacán, as well as from dry areas like the “islas húmedas”, and two from humid areas where Mesene jimena   sp. nov. is found.

Previously, Llorente (1984) had delimited an area of endemism as a sub-region of this province, considering only Oaxaca and Guerrero on the Mexican Pacific Coast between the isthmus of Tehuantepec, a very dry region serving as a barrier between Oaxaca and Chiapas, and the dry Balsas basin on the coast to the northwest. ( Fig. 27 View FIGURE 27 ). To the north, the area is separated by the heights of the Sierra Madre del Sur of over 2000m. This area of endemism is closely related with the Province of the Sierra Madre del Sur, but the limits between both are forests between 1000 and 2000 m that include holm oak forests and cloud forests of mid elevation, as characterized in Llorente and Escalante (1992).

In contrast, Mesene margaretta   ranges from eastern Ecuador ( Hall and Lamas, 2007); Colombia on both slopes of the Andes, the northern Andes of Venezuela, then north through Central America to Mexico (CJC). The two species, M. margaretta   and Mesene jimena   sp. nov. are allopatric in Mexico, and specimens examined show no signs of interbreeding, nor has a blend zone been discovered despite intensive collecting. Mesene margaretta   is found from Chiapas to San Luis Potosí on the Atlantic slope. ( Fig. 27 View FIGURE 27 ) Records from Mexico are shown below from a number of museum collections. Data with the locality of Candelaria, Oaxaca is in error. The material was gathered from local collectors by Edward Welling, a butterfly dealer, and probably represents other localities. Extensive collecting in the Pacific slope in Oaxaca by the junior authors over the last 30 years has failed to record Mesene margaretta   from this area.

Ecology. Mesene jimena   sp. nov. is confined to evergreen and semi-evergreen humid forest of Guerrero and Oaxaca Pacific slope below 700 m. It appears this species is associated only with this vegetation and high humidity. Conversely, M. margaretta   in Mexico inhabits dry seasonal forest and cloud forest from 400 to 1350 m. In accordance with Llorente (1984, 1996) and Llorente and Escalante (1992) the differentiation of species and subspecies levels in the Mexican Pacific depends on their range of habitat. When they are closely tied to a limited altitudinal range and habitat, their isolation is more complete and the possibilities of divergence to the species level are greater. Conversely, if their distribution is wide and unlimited by climatic and altitudinal barriers, their differentiation between populations is less, as in the case of Pereute charops   sspp., Dismorphia amphiona   sspp., Rhetus arcius   sspp. and M. margaretta   , all of which have greater altitudinal and climatic distribution than Mesene jimena   sp. nov.

The following table summarizes the differences between the two taxa.

The extent to which the aforementioned criteria will apply to other groups must be tested in practice, with supportive evidence. However, in the case of Mesene margaretta   , and Mesene jimena   sp. nov., they appear applicable. 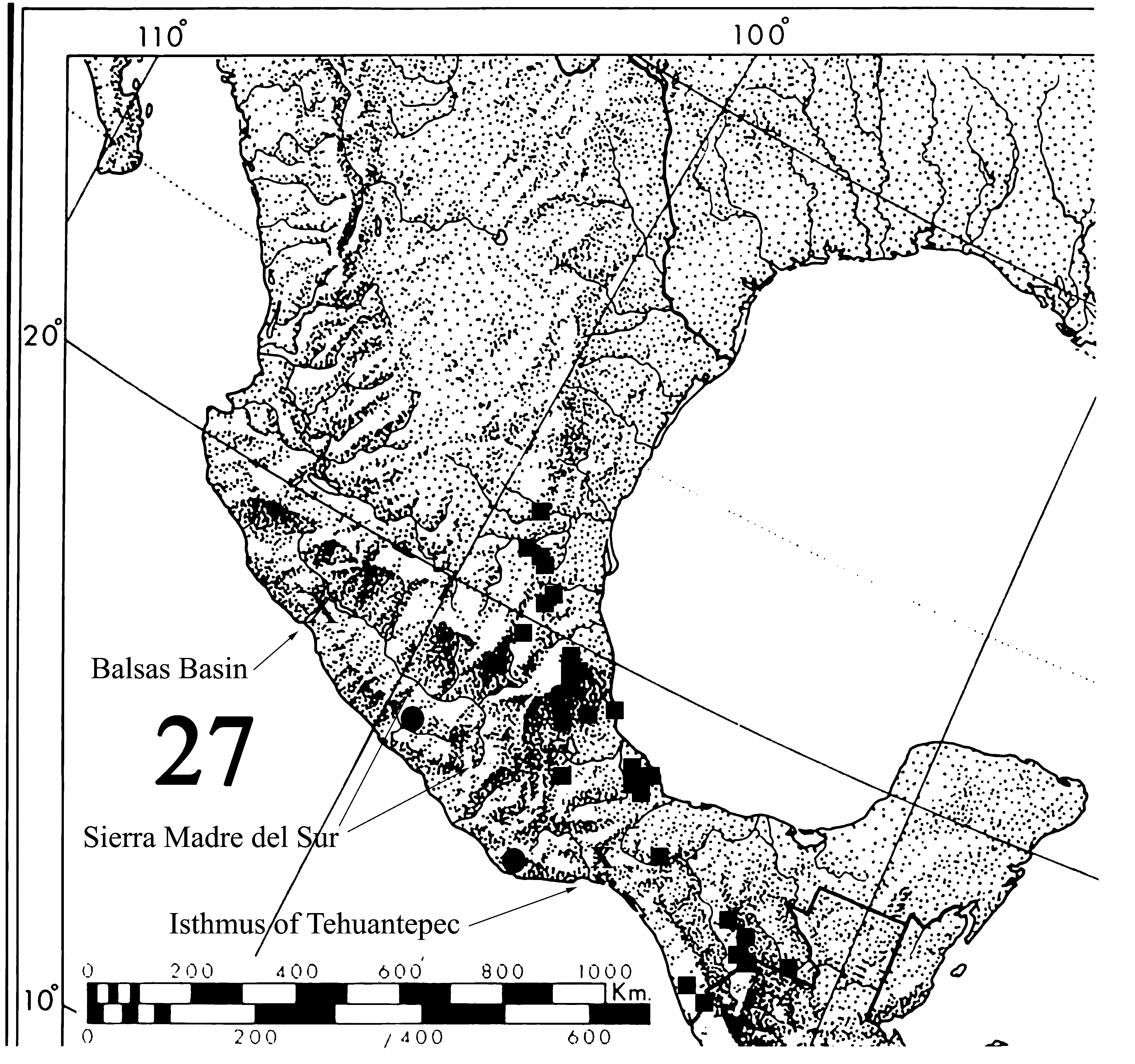 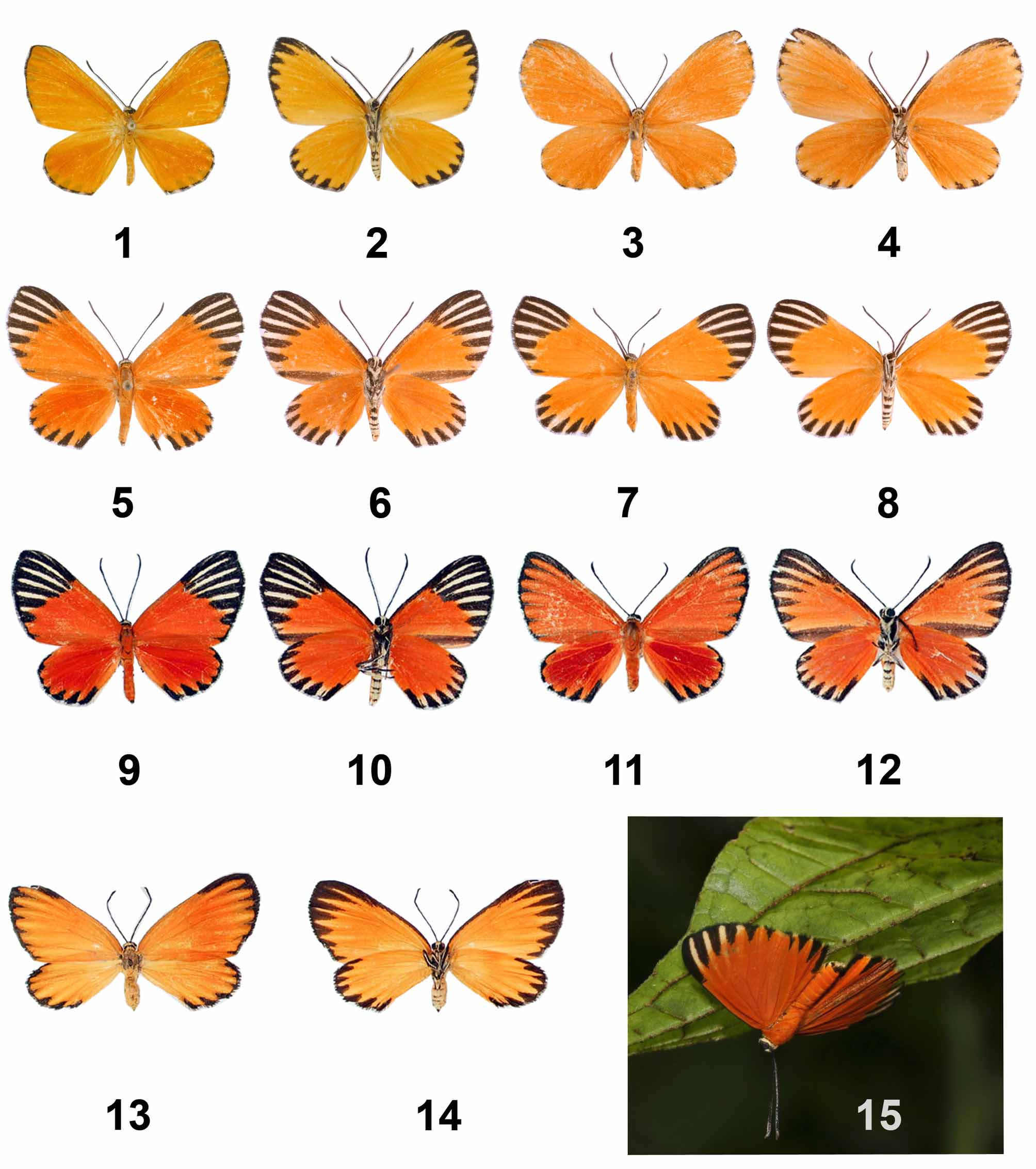