Remarks on name-bearing types and type locality. Two specimens that are still preserved in the Natural History Museum (London) have been designated as syntypes (“cotypes”) by Parker (1949): BMNH 1946.1.23.52 (formerly 93.11.21.64) and BMNH 1946.1.23.53 (formerly 96.9.24.30). As discussed above, only one of these specimens (1946.1.23.52) is clearly distinct from obtusus and fits well with the morphology of other specimens from Kenya and southern Somalia. The other syntype (1946.1.23.53) falls within the variation of obtusus in our multivariate analyses (see Fig. 1 View FIGURE 1 ) and apparently in habitus: pale coloration (but significance difficult to assess in old preserved specimens) and possibly a longer snout than in typical somalicus. As one syntype does not clearly differ from obtusus in morphology, and is thus not unambiguously assignable to the populations separated as somalicus, we here designate as lectotype of Tarbophis dhara somalicus the specimen BMNH 1946.1.23.52 from Ngatana (see discussion on locality below) whose morphology is clearly outside the variation seen in obtusus . This specimen collected by J. W. Gregory is a male with 20 mid-body scales, a single anal, 203 ventrals, 72 pairs of subcaudals, 10 supralabials on left side and 9 on right side, a uniformly dark dorsum and pale underside.

The type locality was originally Ngatana ( Kenya) and Lugh (= Luug, Somalia), restricted to Ngatana by present lectotype designation. We could not locate any modern place called Ngatana in Kenya, but Gregory (1894) (apparently the collector of the somalicus former syntypes) mentions Ngatana several times in a paper dealing with his explorations of the lower Tana valley. In this paper, Gregory mentions establishing his camp for several weeks at Vuju, in Ngatana (Ngatana could thus be a region rather than a village). We could not locate Vuju either, but in the same paper Ngatana is said to be on the Tana river, two night marches from Witu [2.39°S / 40.45°E], indicating that the type locality is along the Tana river 30 to 60 km north-west of Witu. Further details are provided by Loveridge (1937), who in 1934 camped at Wema [2.18°S / 40.19°E according to http://www.fallingrain.com/world/KE/a/W/] on the Tana River about one mile northwest from an old village called Ngatana, which had been abandoned following an epidemic. This place is 36 km NW form Witu, which agrees well with the information given by Gregory (1894).

Diagnosis. We have examined only 5 preserved specimens and 2 color photographs of live animals of this taxon so more work is needed to fully understand its morphological variation and diagnostic characters. See T. tripolitanus and T. gezirae for separation from these taxa. An African form of Telescopus with the following characters combination: head broad, usually well separated from body, longer than in tripolitanus , shorter than in dhara , with apparently more rounded snout than in dhara and obtusus ; head same colour as body but with paler head sides; pileus uniform; no dark longitudinal line along head side; supralabials all pale or same colour as head side with white lower edge; body coloration in adults uniformly dark (black-)grey, slightly darker on mid-dorsum; belly uniformly pale. Some preserved juveniles have a uniform pale body but decolouration due to preservation cannot be excluded. In our five specimens, mid-body scale rows 20 or 21; ventral scales 200–219, subcaudal scales paired, 72–81; anal usually entire ( Parker, 1949). There are 9–10 upper labials, of which three (4, 5, 6) touch the eye.

Distribution. Currently known from Kenya and southern Somalia ( Fig. 2 View FIGURE 2 , Parker 1949). The limit of the ranges of somalicus and obtusus and the extant of intergradation or geographical overlap between these taxa remain to be established by examination of additional specimens. 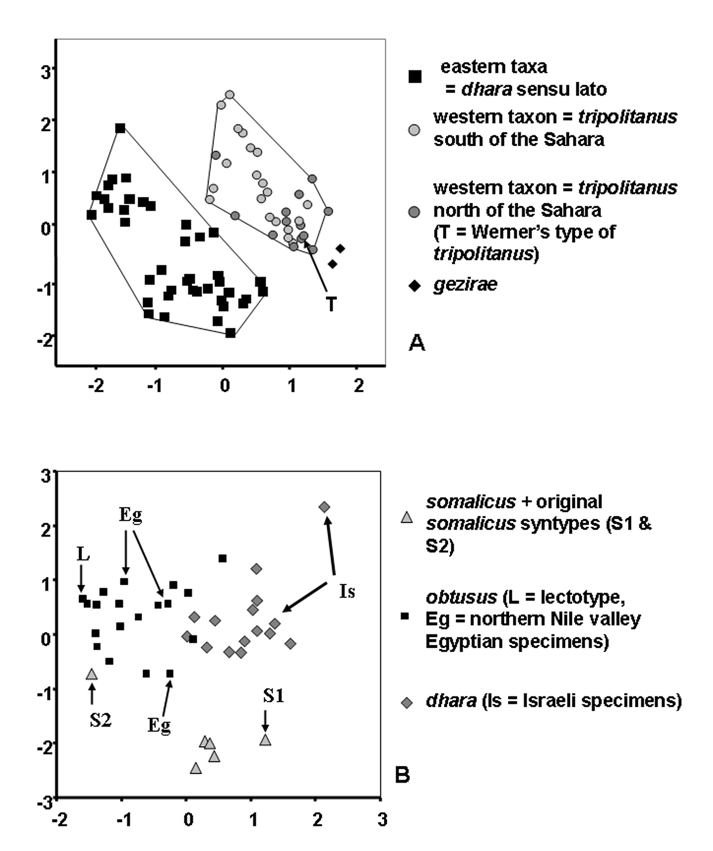 FIGURE 1. Positions of Telescopus specimens with complete morphological data on first and second axis (PC1 and PC2) of a PCA performed on all specimens (A) or only specimens of the eastern taxa (B). 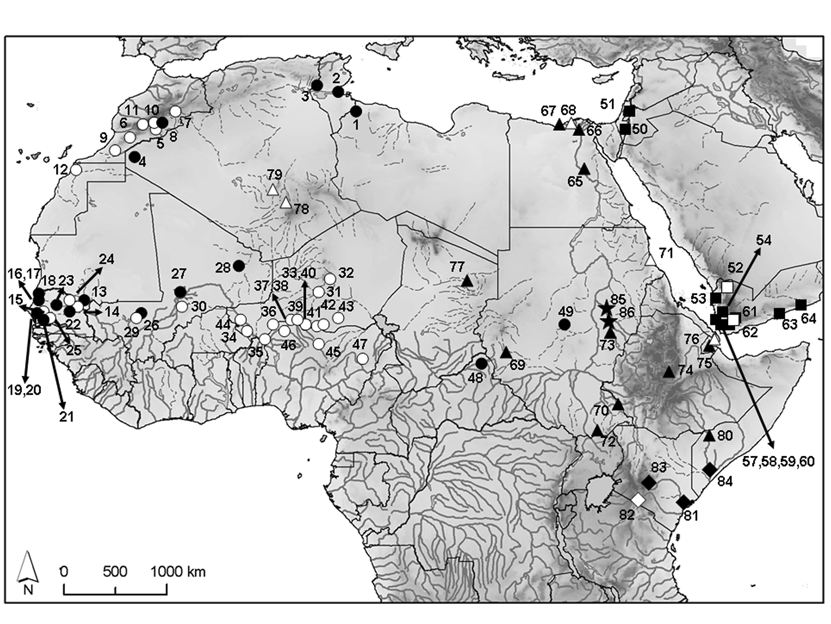