Diagnosis. A small sized rock agama of the Agama lionotus  complex that can be identified by the following combination of characters: nasal scale pear-shaped, in contact with the first canthal scale; nuchal crest small, consisting of few indistinctly raised scales; ear opening surrounded by five tufts of spiny scales, with two additional tufts on the neck; vertebral scales feebly keeled, dorsal and lateral scales keeled, ventral and gular scales smooth; dorsal and lateral caudal scales keeled, ventral caudal scales smooth; and males with one discontinuous row of ten precloacal pores. Males in nuptial coloration exhibit an orange-red throat, occasionally with some faded chevrons on the edge, a vertebral stripe, and a narrowly annulated blue and white color pattern on the tail. Head dorsum orange-red in color but variable, body purple-bluish. During the day the color is dull and traces of blue can only be seen on the shoulders. Female, brownish with two pairs of orange marks, one on the dorsolateral margins of the abdomen and the other on the axilla; scattered bluish spots on the head. Along the vertebrae from the neck to the tail base are 6–8 pairs of dark/black spots that extend along the tail as dark spots or bands. In addition, other dark or black marks or spots are present on the flanks. Non-displaying males have the same color as the females except that they lack the orange pair of marks and the bluish spots on the head. All have dark marks on the limbs ( Fig. 3View FIGURE 3).

Description of holotype. NMK-254L/1 is an adult male and was the largest individual collected, with a maximum total length of 236.5 mm. Head round to moderately convex, body scarcely depressed, hind limbs robust. Head scales moderately large, smooth, with a medium-sized occipital scale as large as the largest head scale, with a visible pineal window at its centre. Gular fold is present. Tail about 1.7 times longer than SVL (SVL 87.5 mm, Tail 149.0 mm). Nasal scale pear-shaped, keeled and strongly convex, situated on the canthus rostralis. A minute nuchal crest is present in males, comprising 12 small erect scales. Five tufts of spinose scales around the ear and an additional two on the sides of the neck. Supralabials nine, infralabials seven. Body scales of medium size, imbricate and homogeneous; vertebral scales feebly keeled, dorsal and lateral scales keeled, ventral and gular scales smooth, both smaller than the dorsal scales, and gular scales smaller than ventral scales. Body scales in 64 rows around midbody, 52 vertebral scales and 76 scales down the length of the belly. Fourth toe and finger equal in length and are the longest with 18 and 15 sub-digital lamellae, respectively. Tail slightly compressed, covered dorsally and laterally with strongly keeled scales that are larger than the body scales, subcaudal scales keeled, becoming smaller towards the tail tip. One discontinuous row of ten precloacal pores ( Table 1).

Coloration (in preservative). The holotype was recently preserved and the dorsum is brownish with pairs of faded dark dorsal spots along the vertebrae and some on the lateral surfaces. Some pale or whitish transverse lines are visible within the pairs of dark spots. There is also a pale vertebral line running from the level of the shoulder to the tail base. The throat is reddish with some pale chevrons. Limbs are brown with some dark marks. The body venter is bluish. Tail grey-brown with dark bands along its entire length ( Fig. 2View FIGURE 2).

Coloration (in life). In life the holotype during the day was brownish with dark regular spots like the female ( Fig. 3DView FIGURE 3) but lacking the orange marks on the dorsolateral margins of the abdomen and shoulders. Later at night, while captive in a cloth bag, it turned dull bluish-purple with the dark marks faintly visible and a reddish throat.

Paratype variation. Mensural and meristic data for the type series are given in Table 1. The male paratypes are all similar to the holotype in most characters although their tails were broken during handling in the field and in terms of color they are bluish, with paratype NMK-254L/3 having very faded, mostly regular, paired dark marks but with some pale transverse spots in a line. Paratype NMK-254L/4 has distinct pairs of dark marks like the holotype but has white annulated marks on the tail. The female paratype NMK-254L/2 with tail cut during handling is light brownish to cream with the clear pairs of dark marks along the vertebra and on the lateral. It is almost the same size as the holotype but with well-marked sexual dichromatism ( Fig. 3View FIGURE 3).

In life the color of the paratypes was quite variable, though generally well camouflaged with the dark lava. Females are light to dark brown with slightly darker spots clearly visible and on close inspection the crown of the head has bluish-green spots. During the day nuptial coloration of the male head and neck is dull with only traces of orange and the body has only traces of purplish blue on the shoulders, although some individuals may exhibit a much brighter diurnal patterning ( Fig. 4CView FIGURE 4). At night the captive male paratypes kept in cloth bags, changed to show distinct orange heads, a bluish body, and alternating blue and white annulated tails. The throat is reddish or orangered like the top of the head, whereas the remainder of the ventral surfaces, including that of the limbs, is bluish and the tail venter is whitish. The female paratype (NMK-254L/2 during the day was brownish with dark regular markings but turned light brown at night, with the body dark spots more clearly visible ( Fig. 3View FIGURE 3).

In a general PCA of mensural and ratio data, the first two axes explain 77.40 % and 31.97% of the variance in the dataset, respectively. For the mensural characters Agama wachirai  sp. nov. loads strongly negatively on PC1, separating it from all other taxa except. A. hulbertorum  , from which it is strongly distinguished along PC2. For the ratios, A. wachirai  sp. nov. is the only taxon considered that loads strongly negatively on both PC1 and PC2. Based on comparative data taken from Wagner (2014) and used in his description of Agama hulbertorum  , Agama wachirai  sp. nov. may be distinguished from most members of the A. lionotus  complex on the basis of its much smaller size (maximum SVL 87.5 mm versus 138.6 mm in A. lionotus  , 165 mm in A. caudospinosa  , 127.8 mm in A. mwanzae  , 143.9mm in A. kaimosae  , 115 mm in A. doriae  , 136.7 mm in A. dodomae  and 134.8 mm in A. turuensis  . It may further be distinguished on the basis of its smaller number of dorsal scales (50–52) from A. finchi  (77-80), A. mwanzae  (60–73), A. kaimosae  (59–68), A. dodomae  (66–75) and A. tutuensis  (66–70). Agama wachirai  sp nov. differs from A. rueppelli  by its pronounced sexual dichromatism (versus not strongly dichromatic) and from A. mwanzae  , A. kaimosae  , A. turuensis  , A. caudospinosa  , A rueppelli  , A finchi  , A. persimilis  and A. doriae  by having a partly bright blue body and a blue and white banded tail in adult displaying males. It also differs from all members of the A. lionotus  complex except A. lionotus  and A. hulbertorum  in having the throat of breeding males suffused with bright red.

Displaying males of Agama wachirai  sp. nov. share with A. hulbertorum  and A. lionotus  a blue body with a vertebral stripe and a blue and white annulated tail. The new species is distinguished from Agama lionotus  by its much smaller adult size (mean 82.5 mm versus 120.0 mm), a lower number of ventral scales (72–77 versus 83–97), and fewer scale rows around midbody (60–64 versus 67–91). Females of Agama wachirai  sp. nov. mostly have regular paired black marks along the vertebrae which are absent or irregular in Agama lionotus  ( Fig. 5View FIGURE 5). Agama wachirai  sp. nov. is most similar to Agama hulbertorum  (mean SVL 82.5 mm versus 80.5 mm), with which it also shares overlapping values for midbody scale rows (60–64 versus 58–67), and ventral scales (72–77 versus 76–82). It differs from Agama hulbertorum  mainly by its different female coloration; A. hulbertorum  lacks the paired dark marks along the dorsolateral flanks and the pair of orange marks on the axilla or shoulders and above the insertion of hind limbs ( Fig. 4View FIGURE 4).

Etymology. The species epithet ‘ wachirai  ’ is a patronym, formed in the masculine genitive singular, honoring of Washington Wachira, an ornithologist/naturalist who spotted and photographed this species, realized its uniqueness, made efforts to identify it and to obtain voucher specimens for the museum.

Habits. This is a diurnal species that occupies crevices and caves, if present, in rock outcrops. In Bubisa-Marsabit they may occur in small colonies. It is quite agile and when disturbed dashes swiftly into the rock crevices. In Bubisa this lizard was found to co-occur with Agama rueppelli Vaillant  and Trachylepis quinquetaeniata (Lichtenstein)  which were also locally abundant, as well as the recently described Hemidactylus lanzai Šmíd, Mazuch, Nováková, Modrý, Malonza, Elmi, Carranza & Moravec.

Habitat, distribution and conservation status. This is an arid lands species inhabiting xeric to desert environments. In Marsabit, suitable areas for this species especially those with lava rocks within treeless habitat occur from north of Laisamis sporadically northward through Bubisa and the Dida Galgalu Desert to Forolle Hill and even the Hurri Hills ( Fig. 6View FIGURE 6). A November 2013 photograph of a male by Yvonne De Jong from Forolle Hill (3.72319, 37.97768; 949 m) on the Kenya-Ethiopia border matches the description of this species. At that time PKM told her the species was not Agama lionotus  , but we had no specimens for comparison. In May 2016 Darcy Ogada photographed males and females within the Forolle Conservancy ( Figs. 4View FIGURE 4, 5View FIGURE 5). Another photograph (perhaps taken in 2004) by Tomas Mazuch was of a female from the base of Mt. Nyiru at South Horr. This means the species should occur sporadically in suitable micro-habitats in the northern frontier and even southern Ethiopia. 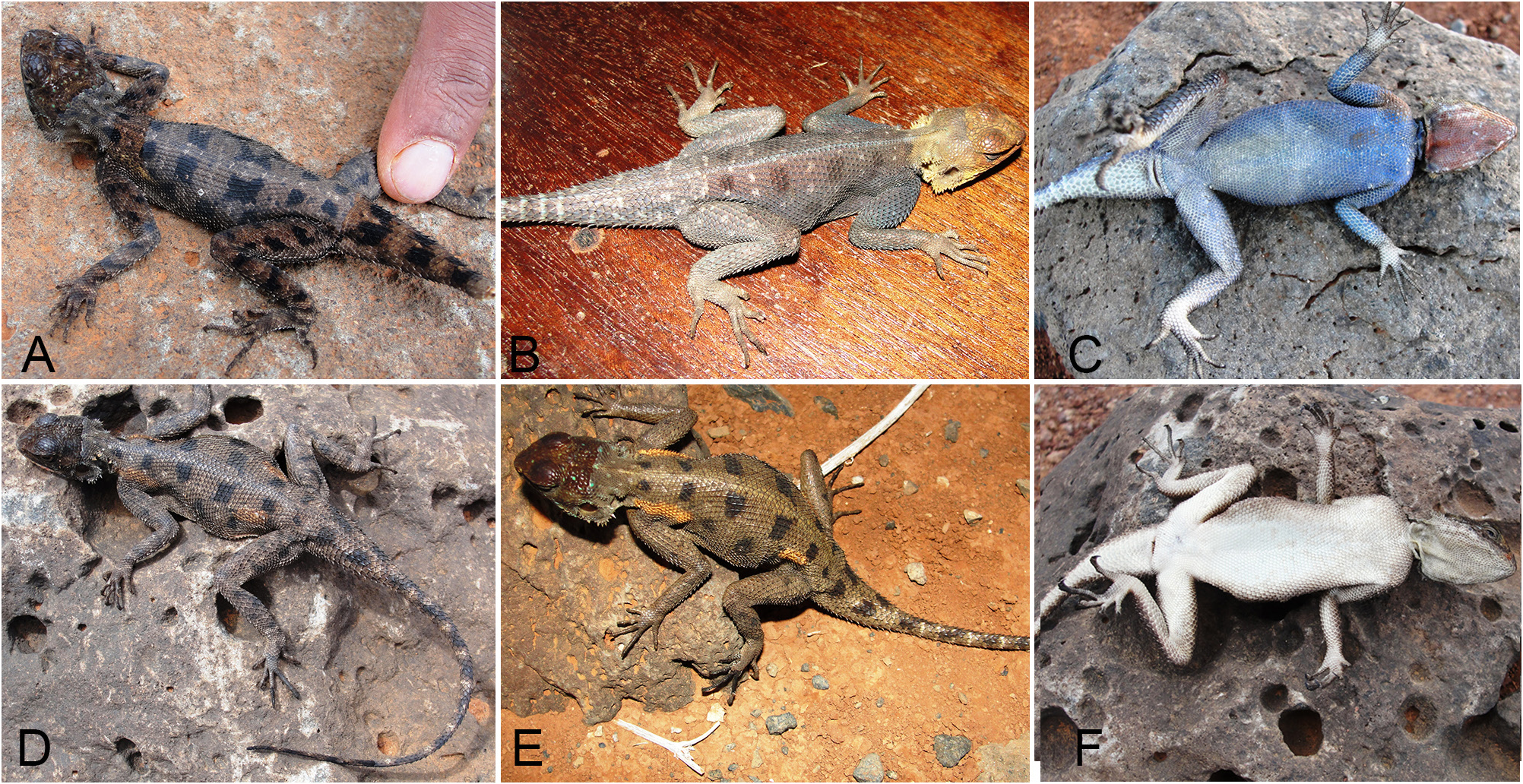 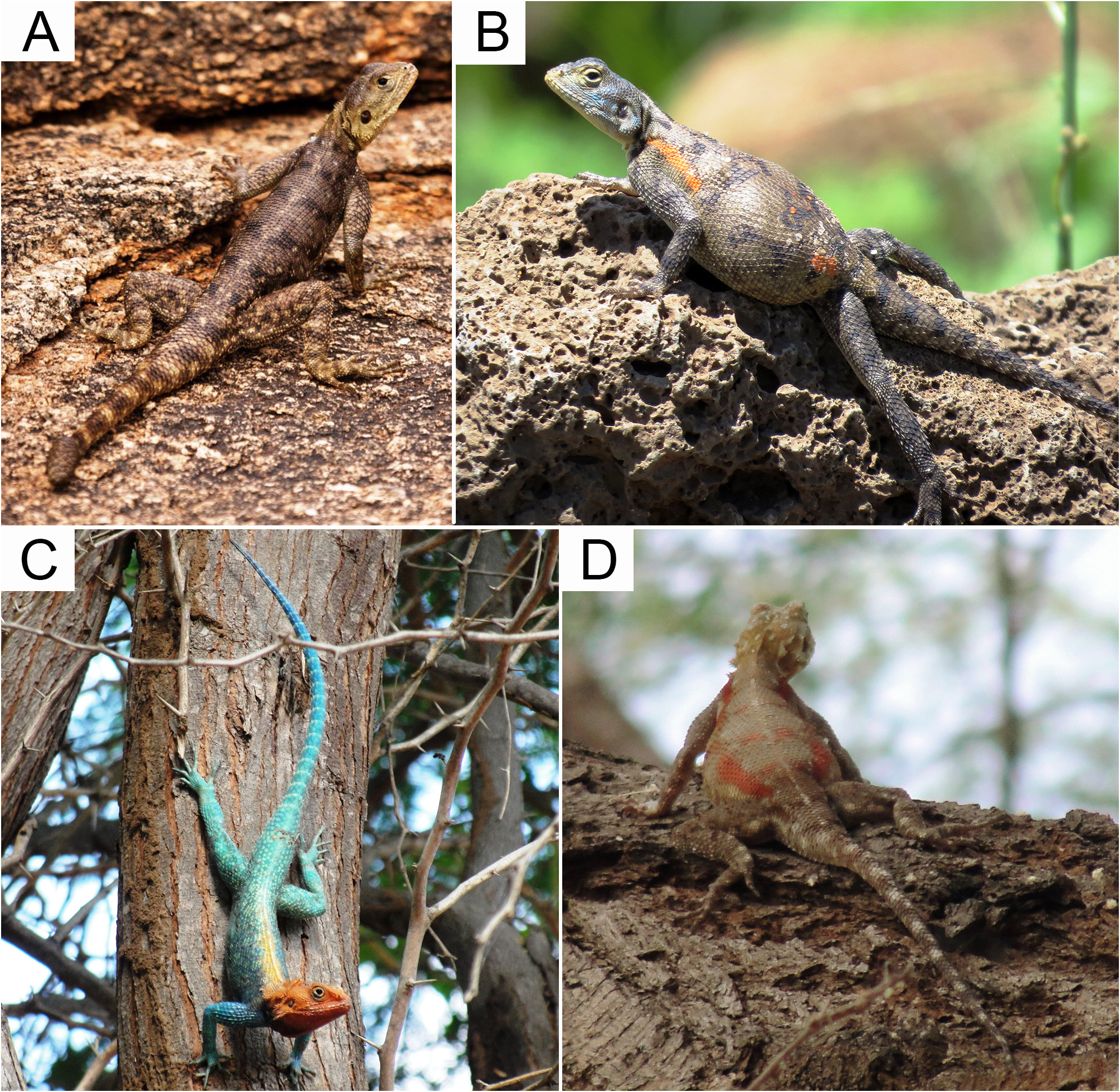