Origin of species name. This species is named in honour of Lorraine Braun who reared this species from Lygus   and helped to clarify a difficult part of the P. pallipes   complex.

Sculpture. Punctures on vertex 5–10 µm in diameter, and on frons and mesoscutum about 10–15 µm in diameter (a little larger than diameter of ommatidia). Punctures 20–25 µm apart on vertex and 5–15 µm apart on frons (thus, in most specimens with shiny surface between punctures) and between lateral ocellus and inner eye margin (as in Fig. 26 View FIGURES 25–36. 25–27 ), 5–10 µm apart near antennal socket, 20–25 µm apart on mesoscutum. Punctures in front of median ocellus in most specimens coarsely and densely punctate. Punctures on mesopleuron dense and in most specimens coarsely punctate on anteroventral surface of mesepisternum in lateral view. Clypeus generally impunctate or mostly so over surface, or occasionally densely punctate. Metasomal tergum 1 with about 10–12 longitudinal ridges, these often anastomosing on disc and forming a puncture­like sculpture.

MALE. Colour. Generally as in female, but metacoxa usually brown, sometimes brown on outer surface and paler on inner and ventral or, rarely completely straw coloured.

Structure. Flagellum with 21–24 flagellomeres (respectively 29%, 54%, 14% and 3% of 56 specimens) and flagellomeres narrow in apical half. Height of eye 0.91–1.00 times as long as minimum distance between inner eye margins. Otherwise structure and sculpture as in female.

Geographical variation. There are a few differences between specimens from western and eastern Canada. In the West , the mesocoxae are often reddish brown to black and the clypeus is almost always smooth or a little punctate. In the East , the mesocoxae are straw coloured to light reddish brown and the clypeus is normally punctate. In specimens from coastal British Columbia, the flagellomere frequency distribution is higher, with most specimens from coastal regions having 21 flagellomeres in females, 22 or 23 in males. The coastal British Columbia sample is small (19 female and 12 male flagella counted) so it is unclear if the population is a geographical variant of P. braunae   or another cryptic species. Because of this character variation, specimens from coastal regions of the Pacific were excluded from the paratype series   .

Taxonomic notes. Among the species of the P. pallipes   complex associated with Lygus   , P. braunae   is nearest P. dayi   . Adults of the two species differ on flagellomere frequency, mesocoxa and metacoxa colour in females, clypeus and mesepisternum puncture development, and flight period.

Host and biological notes. Adults of this species have been reared mainly from Adelphocoris lineolatus   and rarely from Lygus lineolaris   . Adults occur from early June to mid August with a peak of abundance from late June to early July. This is a univoltine species on nymphs of the first generation of Lygus   .

Material examined and range. 167 (62♂, 105♀) adults were studied. Of these, 7 were reared from Miridae   and 156 were field collected. The species is known from boreal regions of North America between the Northwest Territories and Alaska   to southwestern British Columbia, south to montane regions of California and Utah and coastal regions of New Brunswick and Nova Scotia. 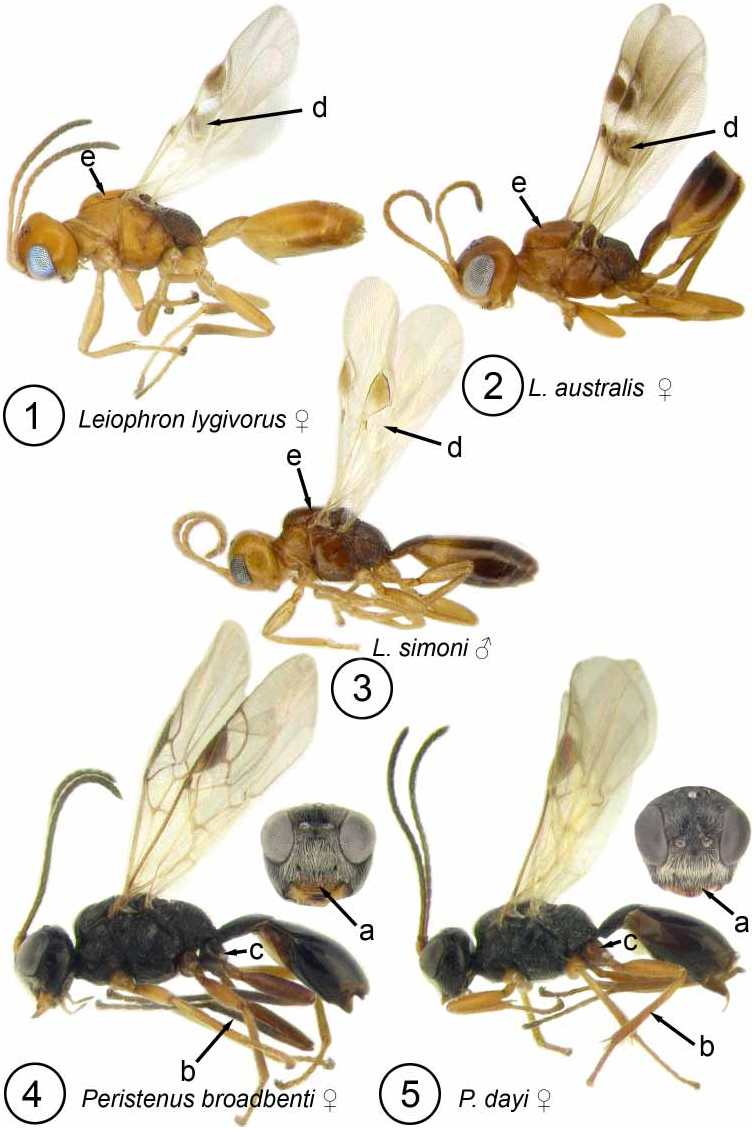