Chaetotaxy: 3+3 pores on anterior margin of labrum; 1+1 marginal pores on clypeus; 2+2 supraorbital pores; 1+1 lateral pores on pronotum in its fore fourth; 1+1 scutellar setiferous pores; 1+1 dorsal setiferous pores on the second elytral striae, which are located slightly before the posterior fourth of elytra; humeral series of the elytra: six pores; one small apical pore on intersect of second and seventh striae; 1+1 marginal pores on last abdominal sternite in males, 2+ 2 in females; onychium with two pairs of fine setae underneath, located on its posterior half.

Individuals of the new species were collected from under stones and from humus and soil in the anterior part of the cave investigated. Tapinopterus (T.) macedonicus sp. nov. is known only from the Špela Bozguni Cave on Mount Karadžica, Republic of Macedonia, and represents an endemic form inhabiting Northern Macedonia only.

The semi-blind or completely blind representatives of the genus Speluncarius Reitter live in deep soil, while the Tapinopterus species have eyes and inhabit the superficial stratum or Mesovoid Shallow Substratum. According to Coiffait (1958), the former are endogean beetles, in contrast to Tapinopterus spp., which are epigean. Present opinion ( Sciaky 1982) holds that Speluncarius (s. l.) spp. are closely related and derived forms of Tapinopterus (s. str.) leading a more specialized mode of life than the latter. The finding of a few forms in transition from an epigean to an endogean way of life with reduced eyes (mostly living in caves) supports this assumption ( Mařan 1945; Guéorguiev and Guéorguiev 1998). The new species is in a more advanced stage of transition from an epigean to an endogean way of life than its closest relatives. 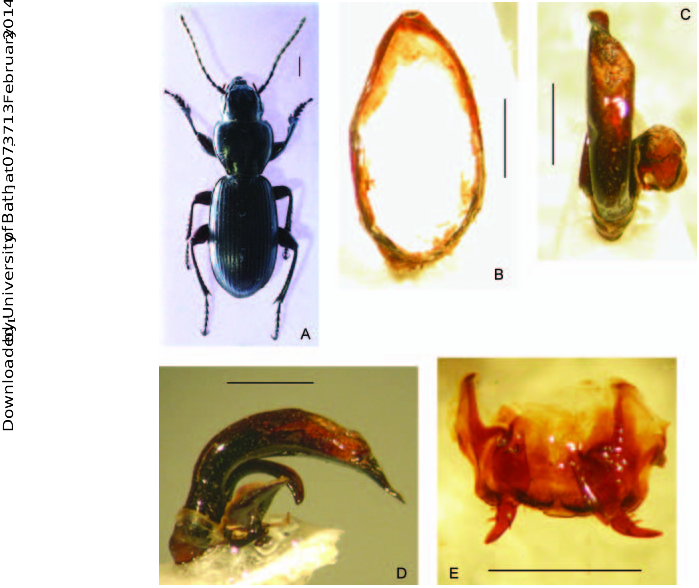