Diagnosis. Austrolebias nubium   differs from its congeners allocated in the subgenus Acrolebias   by a unique male colour pattern consisting of flanks predominantly dark bluish brown with yellowish golden or light grey narrow vertical bands (vs. flank pale yellowish brown, with dark brown bars in A. araucarianus   ; flanks lilac grey with bluish white vertical bands in A. botocudo   ; and flanks golden with purplish grey bars in A. carvalhoi   ); presence of melanophores irregularly distributed across the body (vs. absence of melanophores in A. araucarianus   and A. carvalhoi) ( Fig. 7 View FIGURE 7 ) (shared with A. botocudo   ); contact organs on anal fin in males (vs. contact organs absent) (shared with A. botocudo   ) and by prominent contact organs in the flank in males (vs. contact organs absent in A. araucarianus   or discrete in A. botocudo   and A. carvalhoi   ), and opercle (vs. absent in A. araucarianus   and A. carvalhoi   or discrete and rarely present in A. botocudo   ). In addition, A. nubium   differ from all species of the subgenus Acrolebias   by the presence of two prominent contact organs in the distal margin of scales of longitudinal series in larger males (vs. never a similar pattern) ( Fig. 8 View FIGURE 8 ). The new species differ from A. botocudo   by presenting jaws short (vs. jaws slightly prognathous) ( Fig. 9 View FIGURE 9 ), dorsal profile of head nearly convex (vs. slight concave) ( Fig. 9 View FIGURE 9 ), fewer neuromasts in the preopercular + mandibular series (26–35 vs. 36–43), by a higher body depth in females (32.6–37.8% SL vs. 28.2–32.3% SL), and by presenting basihyal cartilage about 60–70% of basihyal length (vs. 40–50% of basihyal length). Austrolebias nubium   differ from A. araucarianus   by presenting neuromasts of the supraorbital series united (vs. first three neuromasts of the supraorbital series separated from the remaining neuromasts), preopercular and mandibular series of neuromasts united (vs. separated), pelvic fin well-developed (vs. pelvic-fin girdle rudimentary or absent), fewer scales in the longitudinal series (27–30 vs. 31–33), more neuromasts in the ventral opercular series (2–4 vs. 1). The new species differ from A. carvalhoi   by having fewer scales around caudal peduncle (18–20 vs. 22), pelvic-fin posterior tip reaching urogenital papilla to 1st anal-fin ray in males, and from anterior to pelvic fin origin to anus in females (vs. tip of pelvic fin reaching base of 2nd anal-fin ray in both males and females), and preopercular and mandibular series of neuromasts united (vs. separated).

Description. Morphometric data are presented in Table 2 View TABLE 2 . Males larger than females, largest male examined 52.7 mm SL; largest female examined 38.4 mm SL. Dorsal profile slightly convex from nape to the end of dorsal-fin base, nearly straight on caudal peduncle. Ventral profile nearly convex from lower jaw to end of anal-fin base, about straight at caudal peduncle. Body moderately deep and compressed. Greatest body depth at vertical of pelvic fin. Snout blunt, jaws short. Dorsal-fin rays in males 22–24; in females 18–20. Dorsal fin sub-rectangular in males, with posterior tip rounded. Dorsal fin semi-circular in females. Origin of dorsal fin in males at vertical through neural spines of 8–9th vertebrae in males; in females through neural spines of 10–12th vertebrae. Anal-fin rays in males 21–23; in females 18–20. Anal-fin sub-rectangular, with tip rounded in males. Anal-fin sub-triangular in females. Anteromedian rays of anal fin of females lengthened. Anal-fin origin on vertical through base of 2nd to 5th dorsalfin ray in males and females, and at vertical through pleural ribs of 8–9th vertebrae in males; and through 10–13th vertebrae in females. Caudal-fin distal margin rounded, with 24–27 rays in both sexes. Caudal-fin rays supported by last 4 or 5 vertebrae. Pectoral-fin rays 12–14; pectoral-fin rounded. Pectoral-fin posterior tip reaching from pelvicfin origin to urogenital papilla in males and females. Usually well-developed pelvic fins. Pelvic fin rudimentary in one female paratype (28.2 mm SL); pelvic-fin present on a single side in one male paratype (male 33.1 mm SL). Pelvic fin rays 5–6 in both sexes. Pelvic-fin tip extending from urogenital papilla to 1st anal-fin ray in males, and from anterior to pelvic fin origin to anus in females. Urogenital papilla not attached to anal fin, sometimes with a thin membrane at the base. Pelvic-fin bases medially separated by short interspace.

Etymology. The specific name “ nubium   ” is alluding to cloud in latin [nubis]. The genitive plural of this i-stem noun is ‘nubium’ ‘of the clouds’. The specific epithet is in allusion to the fact that the species occurs at the highest altitude recorded for a member of genus Austrolebias   . In addition, annual fish are popularly known as “peixes das nuvens” [cloud fishes], because they appear after rains in areas that were previously completely dry.

Ecological notes. Austrolebias nubium   was found only in isolated, natural temporary pools (with areas ranging between 780 and 1,100 m 2), with clear, lentic water, situated on cambisoils, and located in grassland landscape of private farmlands ( Fig. 10 View FIGURE 10 ). There are small intermittent drainages associated with the pools. The vegetation is composed by peatbog ( Sphagnum   sp.), emergent, floating, and submerse macrophytes. During the austral winter, temperatures can drop to below 0˚ C, with frost and even snow can occur in the species biotope. The surroundings of the biotopes are used for extensive cattle ranching, soybean crops, and orchards (apples and pears). Both populations are found in close proximity (less than one kilometer apart) but are hydrologically isolated.

Conservation. In accordance with IUCN criteria, Austrolebias nubium   is considered as “Critically Endangered” species, under the criteria CR B2ab (ii, iii). The species presents an area of occupancy of 1880 m 2 (AOO less than 10 km ²), populations severely fragmented (a) and continued decline (b) in area of occupancy (ii) and quality of habitat (iii). 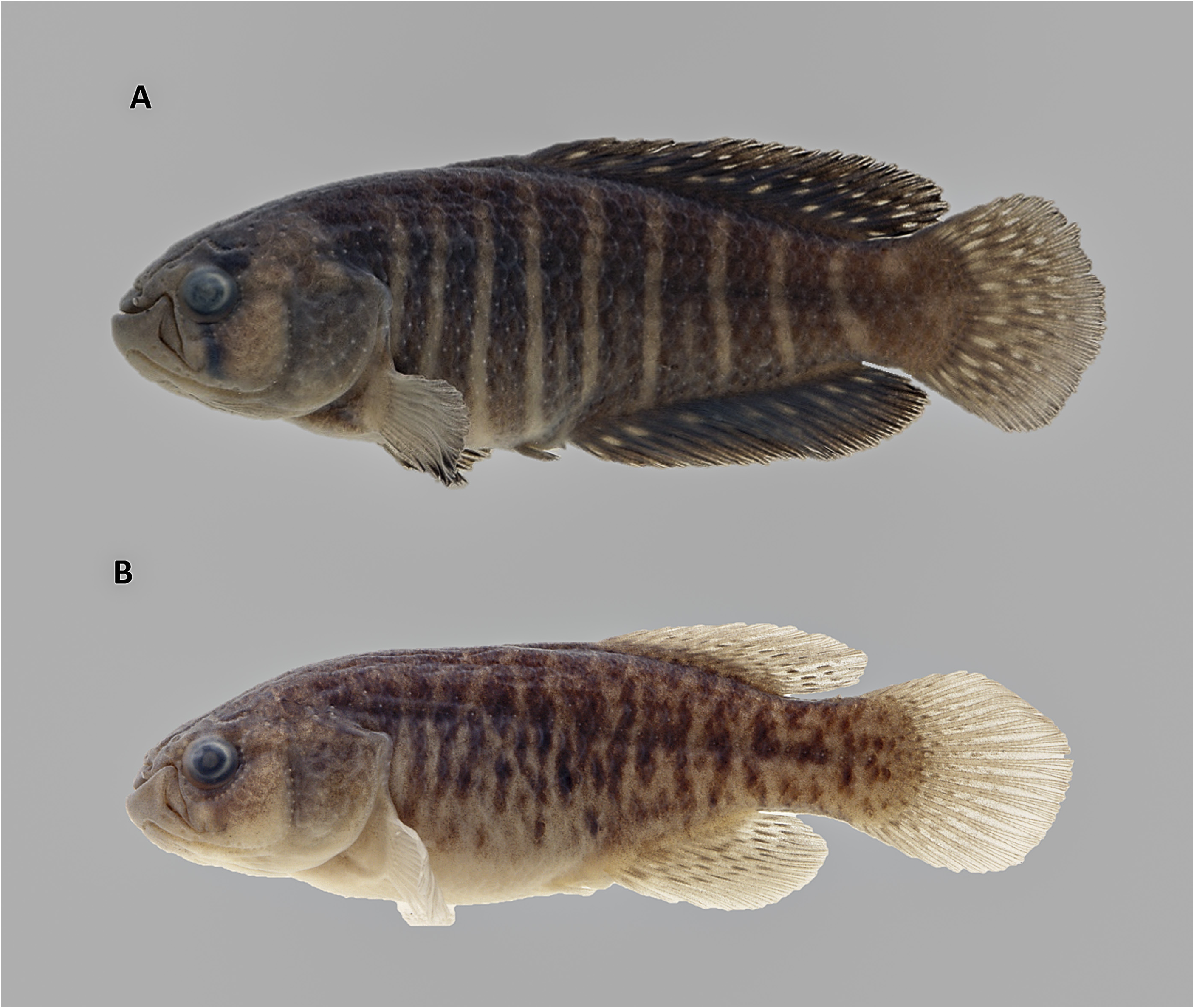 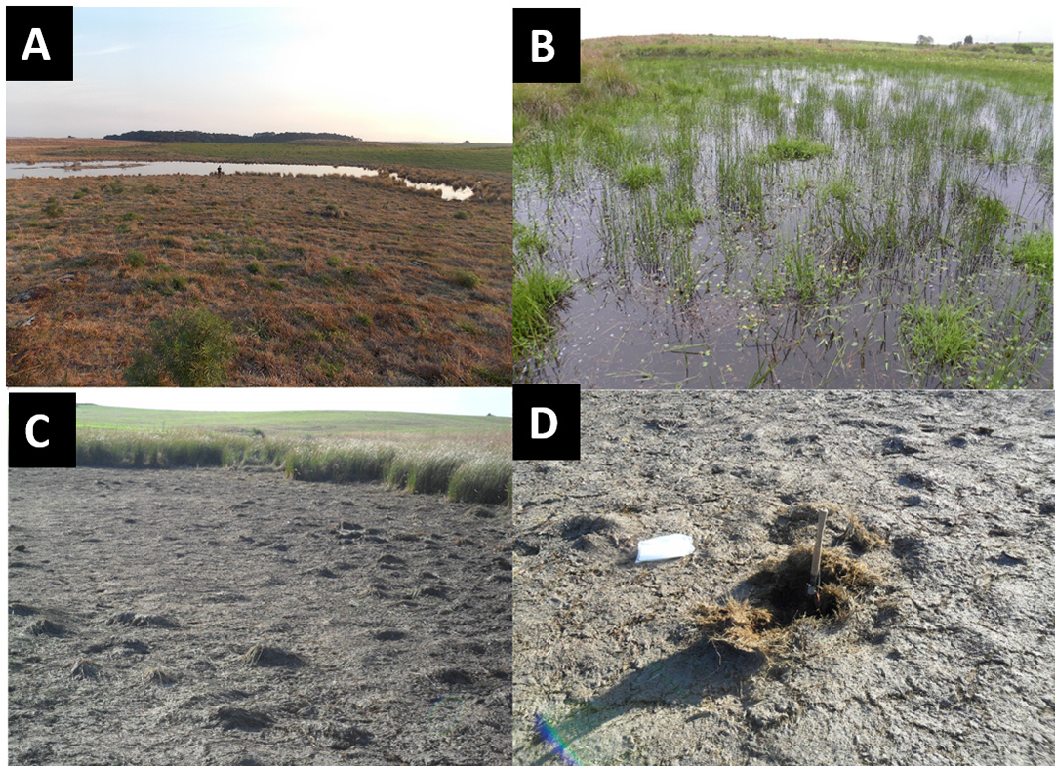