The indistinct brown discal band UNH (Figure 19.1) makes this species quite distinctive. In the field, the yellowish tibiae and tarsi may also be helpful (Figure 19.1). This is a fairly common and widespread member of the genus, found in partially wooded or wooded situations from sea level to at least 1600m in eastern and southeastern Africa. Sevastopulo (1974) considered it fairly common in the Makardara Forest, and I have found in both lightly and densely wooded areas from the Kenya coast to western Kenya.

Adults rest quietly on low vegetation for extended periods with their wings closed (Figure 19.1), but they will also sunbathe (Figure 19.2). Henning et al. (1997) describe territorial behaviour based on these perches. Dickson & Kroon (1978) consider it a morning species, not normally seen in the afternoons, but we do not have observations to assess this.

Grasses are the only food plants recorded. Le Pelley (1959) records Panicum trichocladum   as a food plant in Uganda and Sevastopulo (1975) lists P. trichocladum   , Cenchrus purpureus   (= Pennisetum purpureum   ) and grasses generally from East Africa (although as noted under B. fatuellus   , this entry appears against both B. fatuellus   and B. lugens   , and I assume it applies to both).

The ova in Figure 20 View FIGURE 20 were laid by a wild caught female from Cottar's Camp, Masai Mara, which was kept in a 58mm diameter plastic pot ( Cock 2010 b). Ova measure 1.0mm in diameter including the basal flange, and 0.9 without it. They are laid singly according to Henning et al. (1997), and hatch within between 5 days at the Kenya coast (Sevastopulo unpublished) and nine days at Nairobi (90 / 22).

The shelters of instar 3 caterpillars on Panicum trichocladum   are made by rolling the distal portion of the leaf upwards (91 / 52), or downwards (90 /83, 95/103, 93/ 105) and feeding basally to this. An instar 4 caterpillar, probably of this species (95 / 111), on the same food plant, used a whole leaf rolled upwards to make a tight tube. Henning et al. (1997) describe the caterpillar as feeding on the distal part of the leaf, but this may reflect the behaviour of older caterpillars.

The mature caterpillar grows to 28mm; head markings variable as described below; body pale yellowish green dorsally. Pale green ventrally; diffuse pale subdorsal and dorsolateral lines; spiracles pale; all legs paler than ground colour. The head is translucent green with variable dark markings and a broad white band down each side of the face. At the heavily marked extreme (Figure 22.2), there is a broad band from vertex laterally to mouthparts, a broad line each side of the epicranial suture, the adfrontals and clypeus dark, and a broad band from below the apex parallel to the epicranial suture which joins the adfrontal suture and runs to the mouthparts, almost obscuring the translucent green ground colour on the face. At the lightly marked extreme (Figure 22.4), the lateral line is narrower and only runs to the stemmata, the lines each side of the epicranial suture are very narrow, and only the upper part of the clypeal sutures are dark, leaving a broad band of translucent green ground colour down the centre of the face and across the adfrontals and clypeus, and the dark line down each epicranium is absent.

Sevastopulo (unpublished) described a sixth instar caterpillar (which he considered unusual, and due to the dry condition of the food plant grasses. "Head whitish, a red-brown lateral stripe, the median suture with a brown line which divides and outlines the clypeus, and a very faint brown line on either side of the median suture...."

The life history illustrated by Dickson & Kroon (1978, Plate 33) shows a caterpillar with reduced dark head markings (only an inverted Y in the centre of the face) and extensive white areas, i.e. intermediate between Figures 22.3 and 22.4.

The pupa is typical of the grass feeding members of this group. It is formed in a slightly folded blade of grass, the cremaster held in a silk bar, and supported by a silk girdle (Sevastopulo unpublished; Figure 23.1). Pupa 90 / 83, reared from a caterpillar on P. trichocladum   , was 24mm long; light green; a yellow-white subdorsal line on abdomen; the proboscis sheath extended about 5cm beyond the wing cases, half way to the cremaster tip. I noted that the eyes developing within the pupa turn dark without going through a red stage (90 / 22). Pupation takes 8–18 days.

A final instar caterpillar found on Megathyrsus maximus   at Karen, Nairobi, 18 Sep 1988 (88 / 82) and provisionally identified as this species, was attacked by larvae of a eulophid ectoparasitoid. The naked pupae were subsequently formed in the leaf shelter and took nine days to complete development, producing one male and 11 females. A third instar caterpillar, collected with others on P. trichocladum   at Kadera God Forest, near Kisii, 5 Aug 1990 (90 / 83 A) moulted before becoming mummified; an adult wasp subsequently emerged (unnamed specimen in NHM). 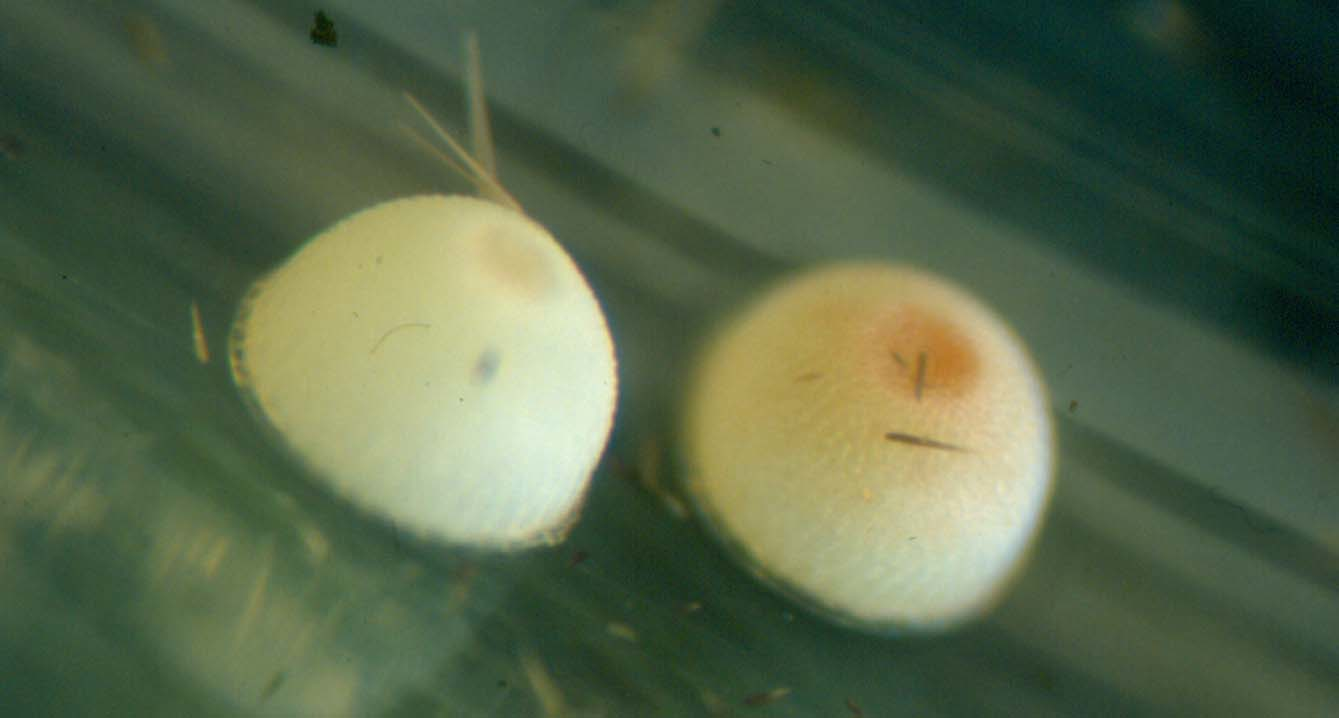 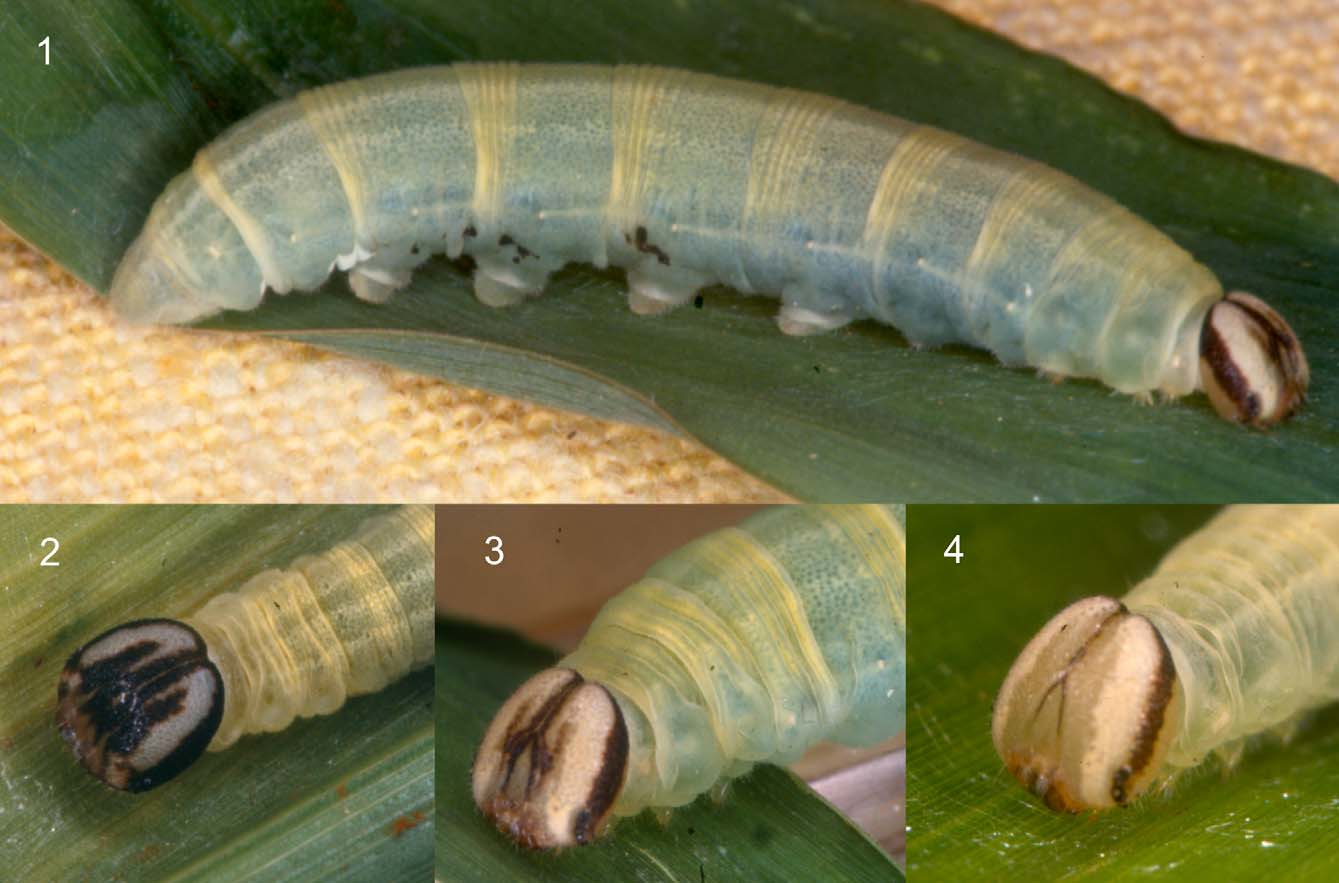