Subspecies fatuellus  occurs throughout sub-Saharan Africa and in Yemen, and additional subspecies have been described from São Thomé and the Comoros ( Evans 1937 a, Larsen 1984). A form with grey scaling on the UNH (cinerea Holland) has been associated with the dry season in eastern and southern Africa ( Evans 1937 a) and both forms are common in Kenya. Van Someren (1939) reports B. fatuellus  as fairly numerous in the grass and bush along the forest margins from 4,500–6,000 ft. (1370–1830 m) in the Chyulu Hills, and it is not uncommon in the Makardara Forest ( Sevastopulo 1974). I consider it an occasional but widespread species of open forest throughout Kenya. TCEC has found it mainly in woodland in Tanzania, but extending into open areas in forest.

Adults settle low on grasses and shrubs when they are easily caught ( Dickson & Kroon 1978). These perches are used to maintain territories as described by Henning et al. (1997), who note that adults also feed at flowers and damp patches.

The recorded food plants are grasses. Le Pelley (1959) lists Cenchrus purpureus  (= Pennisetum purpureum  ) in Uganda, Forsyth (1966) gives Paspalum  sp. and Zea mays  (maize) in Ghana, and Sevastopulo (1975) lists Panicum trichocladum  , C. purpureus  (= Pennisetum purpureum  ) and grasses generally from East Africa (this entry appears against both B. fatuellus  and B. lugens  , and I assume it applies to both). Sevastopulo (unpublished) does not mention Panicum trichocladum  as a food plant, so the origin of this record is not clear. Vuattoux (1999) reared ten specimens in Côte d’Ivoire from several different grasses: five on Setaria barbata  , two on Digitaria atrofusca  (= D. seminuda  ), one on Setaria megaphylla  and two on unidentified grasses.

I have reared B. fatuellus  on Megathyrsus maximus  (= Panicum maximum  ) and another (non-flowering) grass in Kenya, and? Panicum  (s.l.) sp. in Côte d’Ivoire. TCEC raised a specimen from an ovum laid on an unidentified grass in a forest glade at Ambangulu in the West Usambaras, Jun 2001.

Two 4–5mm n- 2 caterpillars collected on an unidentified grass in Côte d’Ivoire (89 / 205 B) made a two-cut shelter just before the leaf tip, by cutting two notches from the edge of the leaf, 25mm apart, and rolling the flap downwards to make a tube. The larger caterpillars shelter in a rolled leaf, and feeding is distal to this ( Henning et al. 1997).

Clark (in Dickson & Kroon 1978) illustrates two different caterpillars of this species from South Africa. The first resembles one of those illustrated here (Figure 17.2); the second has the dark line in each half of the face narrower, and not extending basally, and the clypeus more extensively white. Henning et al. (1997) include a photograph of a caterpillar from South Africa, similar to that shown here as Figure 17.3 – 4. Although Clark (in Dickson & Kroon 1978) documents five instars, Sevastopulo (unpublished) recorded six at the Kenya coast.

Up until the end of the penultimate instar, caterpillars have a plain, dark head; that of instar n- 2 measured 1.2 x 1.2 mm (91 / 41). The head of the penultimate instar measures 1.8 x 1.9mm wide x high (n= 2); it may be uniformly dark, but in one case (91 / 41) had diffuse slightly paler areas on the epicranium, in front of the stemmata and on the frons; body green with a white dorsolateral line and a diffuse pale lateral line (87 / 23). Only in the final instar do the caterpillars develop a variably marked black and white head ( Figure 17View FIGURE 17), 2.5 x 2.9mm wide x high (n= 3). A description was prepared of a final instar caterpillar collected at Arabuko-Sokoke Forest on M. maximus  (87 / 23), which measured 18mm when newly moulted and 37mm when mature. Head wider near base; slightly indent at vertex; dark brown; face white, with dark brown sutures, and a black line running from about half way between top of adfrontals and vertex, parallel to epicranium, meeting adfrontal suture a little below apex; basal part of this line then curves laterally and becomes more diffuse; a vertical line in basal half of clypeus (similar to Figure 17.4, but the brown line is narrower in the described specimen); scattered short, pale, erect setae. T 1 concolorous with body. Body light yellowish green; dorsal line darker green, becoming translucent as the caterpillar matures; well marked pale dorsolateral and lateral lines, becoming more diffuse, as the caterpillar matures; ventrally, spiracles and all legs whitish. I recorded that the wax glands develop ventrally in the mature final instar caterpillar as a double patch on A 8 and a single patch on A 9 for one caterpillar (87 / 23, Arabuko-Sokoke Forest), on A 5 and A 6 for another (91 / 41, Kakamega Forest), and on A 7 –A 8 for a third (89 / 205 B, Côte d’Ivoire); further observations are needed to clarify this. The final instar takes about 13 days. Development from eclosion to pupation can take 33 days at the coast (Sevastopulo unpublished).

The pupa, typical of the group, is formed partially exposed in a leaf only partly rolled and held with silk basal and distal to the pupa ( Figure 18View FIGURE 18). The shelter is lined with white waxy powder, but this is not on the pupa itself. Male pupa 87 / 23 was 31mm long and about 5mm at the widest; slender, with a straight frontal spike 2.5mm long; light green; narrow subdorsal lines about 1mm apart. Pupation takes 10–19 days. 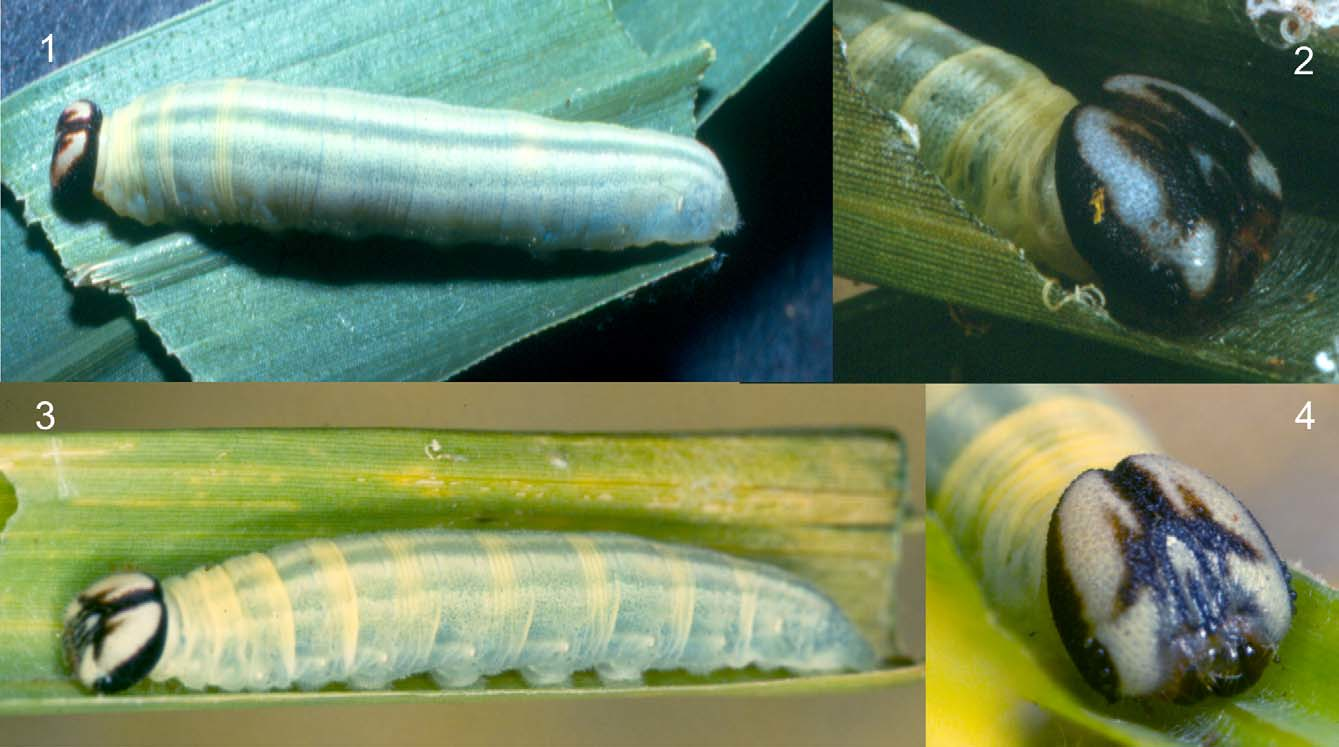