The range of ssp. mathias extends through most of sub-Saharan Africa, through Arabia to India and South-East Asia; it was described from India ( Fabricius 1798). Larsen (2005) points out that the type specimens are not P. mathias as understood today, and so a case will need to be made to the International Commission on Zoological Nomenclature to preserve the current usage, which dates at least as far back as Butler (1870). Additional subspecies are recognised in east Asia (oberthueri Evans) and Papua New Guinea (repetita Butler) ( Evans 1937 b, 1949). It is widespread in Kenya. The dark brand of male P. mathias easily distinguishes this species from male P. thrax which has a pale grey brand, but the females are confusingly similar. However, the caterpillars as shown here are easily separated (see also Cock 2010 a).

Most food plant records from Africa are of Poaceae crops. It was recorded as a pest of cereals (“rice, maize and millet ( Sorghum vulgare )”) in Zanzibar in a general paper on insect pests by Mansfield-Aders (1920). Sorghum vulgare is normally considered to be a synonym of S. bicolor , i.e. sorghum not millet; millets refer to species in several different grass genera including Cenchrus americanus (= Pennisetum glaucum , bulrush millet), Setaria italica (Italian foxtail millet), Panicum miliaceum (common millet), and Eleusine coracana (finger millet, African millet). Le Pelley (1959) cited Mansfield-Aders (1920) when listing Andropogon spp. (probably a reference to sorghum or millet) and pasture grasses ( Uganda) and Zea mays ( Uganda and Zanzibar), records which Sevastopulo (1975) repeats without locality. Given that Mansfield-Aders (1920) did not distinguish between the three cereal crops, the subsequent repetition of African records from sorghum or millet should be considered unconfirmed, although there are better documented records from Asia (below).

Pelopidas mathias has been noted as a pest of rice ( Oryza sativa ) by Descamps (1956) in Cameroun, and by Heinrichs & Barrion (2004) in Cameroun and Côte d’Ivoire. Brenière (1976) lists it as a pest of rice in West Africa, but noted that damage is minimal and outbreaks terminated by the action of natural enemies. In Angola, it has been reported as a pest of wheat ( Triticum sp. [ aestivum ]) of unknown economic importance (“importância económica ignorada”) ( Carvalho & Cardosa 1971). In South Africa, Murray (1959), Dickson & Kroon (1978) and Pringle et al. (1994) record Ehrharta erecta and other suitable grasses, while Carnegie et al. (1974) list it as an unimportant pest of sugar cane ( Saccharum officinarum ). In Côte d’Ivoire, Vuattoux (1999) reared P. mathias from the savannah grasses Hyparrhenia diplandra and Imperata cylindrica . I (or colleagues) have found caterpillars on Megathyrsus maximus (= Panicum maximum ) (in Zimbabwe), Sorghum bicolor ( sorghum ) and Zea mays (maize) in Kenya.

Additional food plants recorded for ssp. oberthueri include Carex anisostachys (= C. olivacea ) ( Cyperaceae ) and Poaceae : Lolium perenne , Miscanthus floridulus , M. sinensis and Setaria viridis ( Nakasuji 1982, Robinson et al. 2001). The field use of a Carex sp. in Japan reported by Nakasuji (1982) was based on a single observation and does not seem to have been duplicated. Litsinger et al. (1994) tried to rear P. mathias mathias on six species of Cyperaceae , but none were suitable food plants. However, it should be noted that in their experimental design, Litsinger et al. monitored the development of caterpillars from eclosion, but did not report at what stage the caterpillars died, although most likely it would have been in the first or second instar. On the other hand, Nakasuji’s (1982) field observation might represent a mature caterpillar that transferred to Carex , or was simply preparing a pupation shelter. We suggest that P. m at h ia s would very rarely use Cyperaceae for oviposition and sedges are not normal food plants.

...... continued on the next page The observations of three palms as hosts in India ( Table 1 View TABLE 1 ) are unexpected. There are few if any parallel situations amongst Hesperiinae , where both grasses and Arecaceae are used as food plants by the same species. The single example that had been recorded, the Neotropical Perichares philetes (Gmelin) ( Hesperiinae incertae sedis), on closer examination in Costa Rica was shown to be four species with very similar genitalia but different barcodes and caterpillars, and that two species were grass feeders and the other two palm feeders ( Burns et al. 2008).

Jandu (1943) lists coconut and palm as food plants without attributing a source or providing any details, and we have found no earlier records with this information, so it may be that these are the author’s observations. Odak & Dhamdhere (1970) record “a large number of larvae of the rice skipper [ Pelopidas mathias ] were found feeding on the leaves of garden fan palm, Livistona chinensis … October and November 1969 ” at Gwalior, Madhya Pradesh, India. Similarly, Purohit et al. (1972) observed P. mathias “feeding on the ornamental plant marikajhad, or Indian sago-palm ( Caryota urens L.) in the winter season from November to February at Jabalpur, Madhya Pradesh. On this host in December 1970 the average population of its larvae was 3 and of pupae 2 per plant.” Since the authors of neither paper state that any adults were reared out, it is possible that the identifications were made from the caterpillars, in which case it cannot be ruled out that this represents another palm-feeding Hesperiinae . Similarly there is no indication regarding voucher specimens, or who made the identifications, so that confirmation of these records would be desirable.

A record from sann-hemp, Crotalaria juncea ( Fabaceae ) ( Fletcher 1920) is unlikely. Fletcher (1920) wrote “It [ Pelopidas mathias ] has also been reared at Pusa [New Delhi] … once on sann-hemp leaves (collected on sannhemp in field).” C.C. Ghosh (in Fletcher 1920) commented “I found one caterpillar on a leaf of sann-hemp”, to which Fletcher responded “sann-hemp is a very unusual food-plant. Possibly it had wandered off grass.” Jandu (1943) listed sann-hemp as a food plant; he does not give a source for this record, but it is likely to be based on the information in Fletcher (1920). Since Ghosh does not mention feeding or shelters, and there have been no subsequent records of this food plant, Fletcher’s suggestion seems realistic to us, and we agree with Litsinger et al. (1994) that this food plant record should be disregarded unless confirmed.

Not seen, but white and hemispherical according to Clark (in Dickson & Kroon 1978, Plate 31), who illustrates the life history in detail.

Sen & Chakravorty (1970) record and illustrate some observations on shelter construction and use on rice by P. mathias mathias in West Bengal, India. Young caterpillars make a tube shelter of about 25 mm using the distal part of the leaf which they roll from both sides downwards “stitched by silken threads” (i.e. multiple strands of silk to form a thick attachment lines). Mature caterpillars take 2–5 h to draw together several leaves from the same or adjacent plants, which are “glued together” (i.e. sheets of silk evenly spread across joins).

A third instar caterpillar in Zimbabwe (88 / 26) cut a 35mm flap from the edge of a leaf and rolled it under; it fed from the leaf lamina edge both basal and distal to the shelter. A final instar on sorghum at Kakamega (88 / 67) was only noted as in a leaf roll, without any detail.

The caterpillar is similar to others of this group. The head is widest near the base, slightly indent at vertex; it is somewhat variable, with a brown to dark red lateral stripe bordered to a variable degree with yellow ( Figure 10 View FIGURE 10 ). A 30mm caterpillar collected on sorghum at Kakamega (88 / 67) was described. Head: 2.5 x 3.1mm wide x high; ground colour translucent apple-green; a brown stripe from vertex laterally to just in front of stemmata, narrowly bordered anteriorly and posteriorly with yellow; mouthparts brown. T 1 concolorous. Body green, tinted yellow on T 1 –T 3; dorsal line slightly darker; narrow, yellowish white dorsolateral line T 1 –A 8; broader, white, ventrolateral line T 3 –A 9, with ventral margin darker, lateral margin diffuse; between dorsolateral and ventrolateral lines the body appears pale green due to densely arranged green dots in a pale matrix; darker green below ventrolateral line; legs concolorous; spiracles pale brown, inconspicuous. The mature caterpillar develops wax glands, but their location and arrangement was not recorded for this individual, and wax was not used to coat the pupa or its shelter. Another caterpillar collected on maize near Kisumu developed wax glands ventrolaterally on A 7 and A 8, but it was parasitized (natural enemies below).

A final instar caterpillar collected on Megathyrsus maximus in Zimbabwe (88 / 26) was similar: head 2.6 x 3.1 mm wide x high; the lateral stripe on the head was chestnut brown, black at the level of the stemmata, narrowest at vertex and 0.5mm wide otherwise; the yellow border to this stripe was restricted to the central two-thirds of the face; a narrow dark line between the yellow border and the brown stripe on the ventral half of the head only; epicranial and adfrontal sutures darker, inconspicuous dark streak on clypeus and lateral to adfrontals. In the penultimate instar of the same individual, the head measured 1.9 x 2.1mm wide x high; vertex barely indent; black ground colour, rugose; a diffuse, pale streak runs from just below the vertex down each epicranium to the stemmata, with a slight break in the lower half; adfrontals slightly paler; pair of angled short dashes on clypeus. Body mostly dull green, yellow-green on T 1 –A 3 and A 8–9; darker, clear dorsal line defined by subcutaneous fat bodies; indistinct diffuse pale dorsolateral line; legs concolorous; spiracles inconspicuous. The n- 2 instar caterpillar had a dark head, 1.0 x 1.2mm wide x high.

Sevastopulo (unpublished) describes caterpillars with black lateral stripes on the head of the fifth instar, although given earlier confusion between P. mathias and P. t h r a x, the fit of this description to the caterpillars of P. thrax ( Figure 12 View FIGURE 12 ) raises the possibility that it could be a caterpillar of P. t h r a x. Sevastopulo also reared another caterpillar with a red stripe with white borders and a broken red stripe between this and the clypeus, i.e. resembling that shown here from Zimbabwe (Figure 10.1). Clark (in Dickson & Kroon 1978) provides a detailed plate of the life history, showing that the first three instars have a dark head, and the fourth instar has the head pale with dark sutures, a strong lateral line from vertex laterally to stemmata and a dark line down each side of face parallel to the adfrontals; a trace of this line on the face persists in the final, fifth instar. Larsen (1984) illustrates the caterpillar from Dhofar, incorrectly identified as P. t h r a x (see Cock 2010 a). IRRI (1983) illustrates the caterpillar as a minor pest of rice, although the pupa is of another species ( Cock 2010 a). Van Vreden & Ahmadzabidi (1986) illustrate the caterpillar and pupa from Malaysia with colour photos.

The pupa ( Figure 11 View FIGURE 11 ) is typical of the group. Female pupa 88 / 67 measured 25 mm, of which the frontal spike was 2mm; bright green ground colour; diffuse white subdorsal line; sharply defined yellowish white dorsolateral line. The male pupa from Zimbabwe (88 / 26) was similar; also measured 25 mm with the frontal spike, which was slightly downturned at the apex, 2.5 mm; the dorsolateral line was white. As the adult developed, the male brand was the first feature to be visible against a white background of the developing wing. Pupation takes about 15 days at Nairobi, but as little as eight days at the coast (Sevastopulo unpublished).

There are many parasitoids recorded from Asia ( CABI 2011), but the only record from Africa is Carnegie et al.’s (1974) statement that the caterpillars are parasitized by an unidentified braconid in South Africa. A 27mm fully grown caterpillar collected on maize near Kisumu (89 / 39) produced 20 small puparia from which emerged 17 adults of Ceranthia sp., a gregarious tachinid fly also reared from Chondrolepis leggei (Heron) and Zophopetes dysmephila (Trimen) ( Hesperiinae ) in Kakamega Forest. 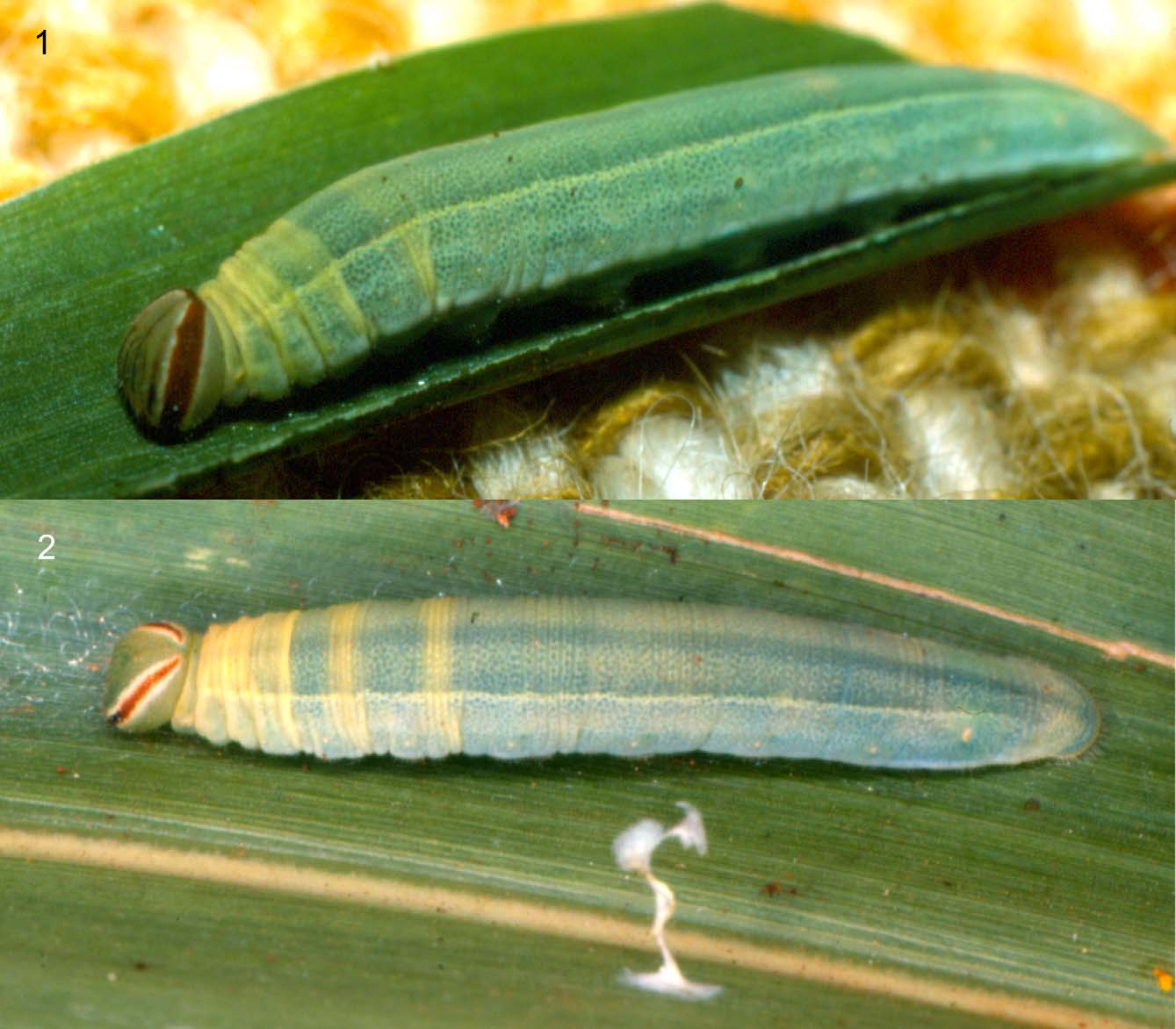 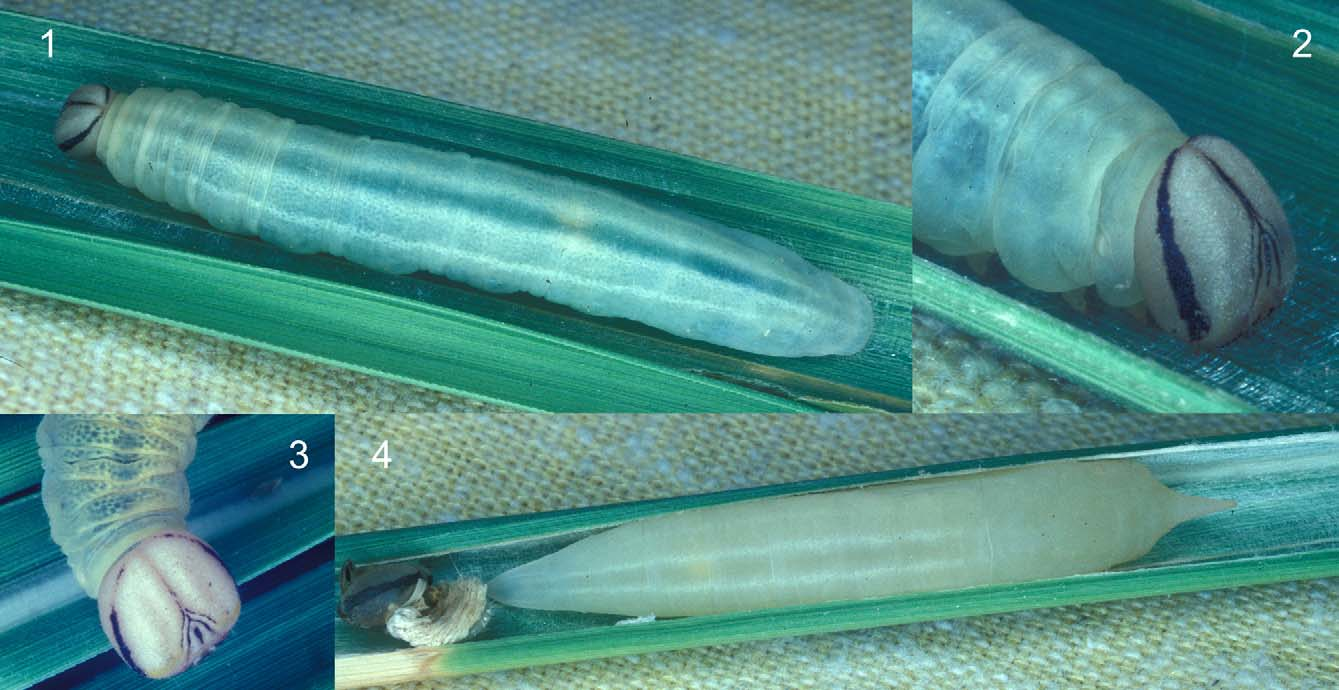 TABLE 1. Selected food plant records for Pelopidas mathias mathias from Asia (compiled principally from Litsinger et al. 1994, Robinson et al. 2001, CABI 2011). Records from “ grasses ” without scientific names are not listed, nor are many repeated records that add no additional information.