Aurivillius (1910) initially described this species as a ‘var.’ of M. alberti  from three specimens collected at ‘Kilimandjaro’, Tanzania. Evans (1937) treated it as a subspecies of M. cretacea  restricted to Tanzania (Usambara and Zanzibar) and south-eastern DR Congo (Kundelungu Plateau, Mpala). However, his diagrams of the genitalia suggest that M. cretacea  included at least two species. In spite of this, when Evans re-examined the issue, at the behest of T.H.E. Jackson, he persisted with the view that there was no morphological difference between the genitalia of the two (Evans 1955). Jackson considered that since the two forms fly together, are easily distinguished and do not intergrade they are both valid species. Carcasson (1981) evidently agreed and returned punctata  to the status of a full species, and subsequent authors have followed this. However, there are several other taxa to consider, and the situation is far from straightforward. Writing about M. cretacea, Larsen (2005)  suggests there may be three or four species in the cretacea-punctata complex.

Here, we follow provisionally the taxonomy in the catalogue ( Ackery et al. 1995) as follows. Monza punctata  has two subspecies: punctata  found from south-east DR Congo, Malawi and Tanzania and crola Evans found from western Kenya to DR Congo. Larsen (2005) discounts a record of ssp. crola from Nigeria, but it has also been recorded from Zambia ( Heath et al. 2002). Subspecies punctata  may extend into the Shimba Hills of south-east Kenya (see below).

Evans (1937) also described three female forms of M. cretacea  with extensive white markings on the hindwing underside: f. canda Evans from the Usambaras, f. candia Evans (with reduced forewing markings) from Uganda and f. crosa Evans (with no spot in cell, forewing) also from Uganda. Ackery et al. (1995) list canda as a synonym of M. p. punctata  , and candia and crosa as synonyms of P. p. crola  . We suspect that similar forms occur in M. alberti  in western Kenya, but this will be investigated separately.

Monza punctata  is most likely to be confused with M. alberti  –– at least where they overlap geographically. In principle the two can be separated by the absence of cell spots UPF in M. alberti  , but most females of M. alberti  from western Kenya have a single cell spot. The uniform light brown fringe of the hind wing of M. punctata  , compared to the brown, slightly chequered fringe of M. alberti  seems to be a useful diagnostic guide, at least in Kenya.

This is generally an uncommon species in Kenya, with scattered records of ssp. crola from open forest habitats in western Kenya and the Central Highlands. In Tanzania it is a common species of forests and heavy woodland: ssp. punctata  in the east from Kilimanjaro down to the Rondo Plateau, and ssp. crola in the west, from Mpanda northwards.

Males will perch and sunbathe with the hind wings three-quarter open, when they can be mistaken for a Borbo  sp.

Vuattoux (1999) reports that he reared Monza punctata crola  from Olyra latifolia  , a naturalized South American species in Africa ( Soderstrom & Zuloaga 1989). Given the distribution of M. punctata  indicated above, which does not extend west of DR Congo, this should be a misidentification, probably for another species of Monza  . Although MJWC identified three specimens for R. Vuattoux, he did not retain a voucher, so this identification has not been checked.

Heath et al. (2002) suggest that the food plant of M. p. crola  is possibly Cenchrus  sp. (as Pennisetum  sp.) but this may be based on the food plant of M. alberti  reported in Larsen (1991). We have found no other published information on the early stages of this subspecies.

Sevastopulo (unpublished, no. 699) collected an unidentified caterpillar on a grass at Kwale, which pupated and died. His description and photographs indicate that the caterpillar was a Monza  sp., a genus which Sevastopulo (1975, 1981, unpublished) had not otherwise reared. His caterpillar resembles the dark form of M. alberti  (Figure 42.5) and M. p. punctata  from Malawi (Ruo Gorge, Figure 49View FIGURE 49) and the Udzungwa Mountains, Tanzania ( Figure 47View FIGURE 47) treated below. No Monza  spp. have been recorded from the Shimba Hills ( Sevastopulo 1974, Larsen 1991) and the only species whose range comes close is M. p. punctata  , which Larsen (1991) records from Meru, central Kenya, and Kielland (1990) records from 300 to 700m in Tanzania, with a range including the Usambaras and Pemba Island. We conclude that Sevastopulo’s unidentified caterpillar was most probably M. p. punctata  .

TCEC reared ssp. punctata  from a member of the Setaria palmifolia  complex at Nyachilo, in the Uluguru  Mountains of Tanzania, and from Setaria  sp. at Ruo Gorge, Malawi, and found the same caterpillar on Setaria  sp. at Sanje, Udzungwa Mountains, Tanzania, where the only Monza  sp. that occurs is M. p. punctata  . The material from each location is treated separately below, noting that material from Ruo Gorge represents the population described as crona, and may prove to be a separate species. 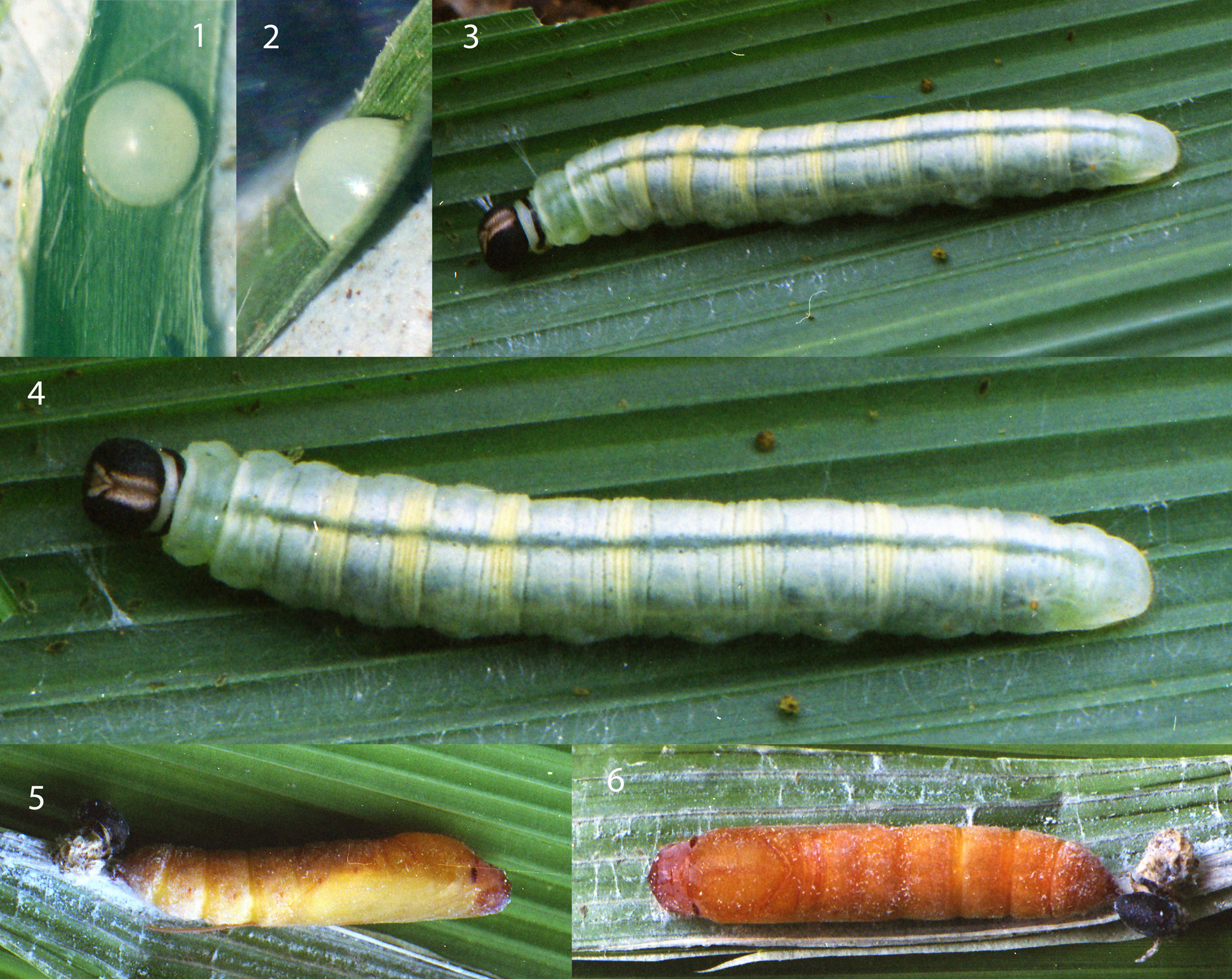