This species occurs in isolated populations in western Kenya, the Rwenzori Mountains (type locality Mubuku Valley, eastern Rwenzoris), Lake Kivu and east of Lake Tanganyika ( De Jong 1986). There are scattered records from the forests of western Kenya; MJWC has found it at Saiwa Swamp, Kitale and Kakamega Forest, and regards it as occasional rather than scarce, at least in Kakamega Forest, where caterpillars are not difficult to find. This species and C. telisignata do not appear to overlap in range in Kenya, although C. niveicornis overlaps with both.

Adults fly late into the afternoon and perhaps into the evening. MJWC has seen males feeding at flowers of Justicia flava in the last light, when only their antennae were visible. Larsen (1991) caught one at flowers early in the morning, and MJWC has seen one or two specimens during the day. Even when at rest the antennae are held out conspicuously ( Figure 30 View FIGURE 30 ).

MJWC has found caterpillars on Cenchrus trachyphyllus (= Pennisetum trachyphyllum ), Setaria sulcata and S. megaphylla (= S. plicatilis ) ( Larsen 1991), all of which have broad leaves and grow along shady margins of forest paths and clearings.

The first shelter is about 30mm long, and formed by rolling the edges of the apical portion of a leaf downwards, and then feeding basally to this, leaving the mid-rib bare. The second shelter is formed nearer the base of the leaf by folding under one edge of the lamina.

In the final instar the head is 2.4 x 2.8mm wide x high (n= 4); oval, slightly indent at vertex; rugose; plain brown of a somewhat variable tone (Figure 31.2 – 5), with the posterior margin broadly dark, widest level with stemmata (Figure 31.2); stemmata black; pronotum narrow, black; body translucent dull dark green, with trachea visible; dorsal line clear, dark green, defined by underlying adjacent fat bodies; anal plate tinged orange, with erect pale setae around margin. The body of the final instar caterpillar turns yellowish, with a contrasting dark green dorsal line when it is ready to pupate. I made no observations on the distribution of wax glands implying that there were none, or almost none. The penultimate instar lasts 10–12 days and the final instar 13–14 days.

The pale brown pupa ( Figure 32 View FIGURE 32 ) is formed in a tightly sealed pupal chamber, similar to that of C. telisignata . Only female pupae were reared. The following is based on pupa 8 / 65 A, with supplementary dimensions from 88 / 99: 19–21mm; light brown; frontal projection 0.75 –1.0mm, dark, parallel-sided, blunt, down-curved; eyes with short brown, forward-directed setae, except for vertical shiny stripe through middle of eye; a transverse ventral row of similar setae between eyes; dorsal and dorsolateral surface with short erect brown setae; spiracle T 1 dark brown, conspicuous; proboscis sheath projects 5–6mm beyond wing sheaths to 1–2mm short of posterior end; posterior end of pupa flattened, with a small pointed projection centrally; on the dorsal surface, just anterior to this posterior margin, and towards the lateral edge, a short dark spike on each side, which is visible in ventral view (Figure 32.3); ventrally a three-quarter circle of tufts of stiff brown setae, the open section of the circle facing anteriorly (Figure 32.3). The pupa takes 14–16 days to develop.

An unidentified ichneumonid was reared several times from caterpillars in Kakamega Forest. When the ichneumonid larva has completed its development in the host caterpillar, it causes the host body to become mummified (Figure 33.3) and pupates within. The adult wasp emerges 7–9 days after the host becomes mummified. One field collected mummy (88 / 66 B, collected 18 Aug 1988) was itself parasitized and produced 36 females and 4 males of a Pediobius sp. (det. J. LaSalle, 1989), which emerged from a single 0.4mm diameter exit hole.

A caterpillar collected at Kitale (88 / 98) and most probably of this species was killed when mature by a mermithid nematode, which had been visible for some days beforehand through the body wall. 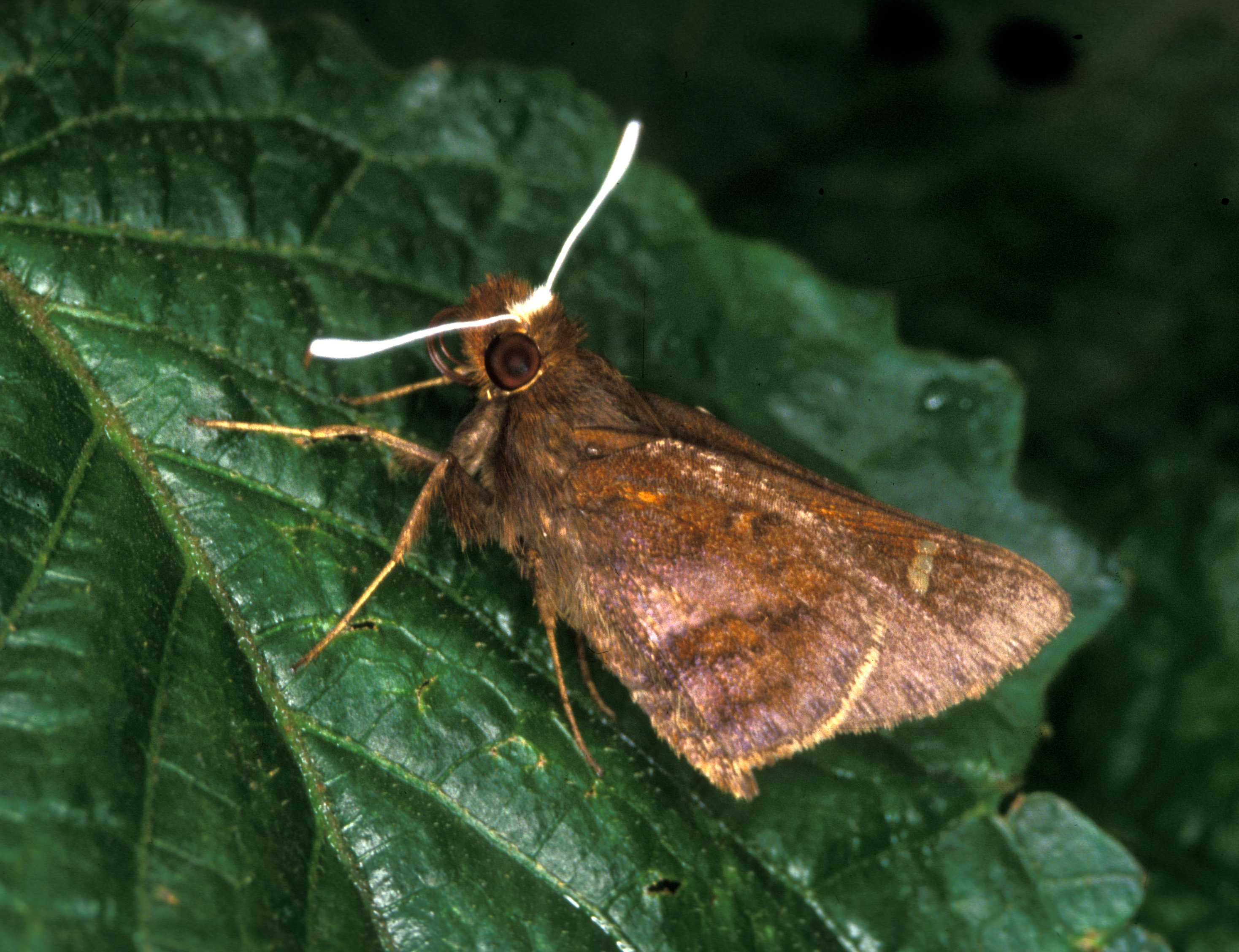