This is a purely Afrotropical genus of about 25 species, most of which occur in central and southern Africa, although two occur in West Africa ( Evans 1937, Ackery et al. 1995, Larsen 2005). Larsen (2005) has suggested that it may be paraphyletic. There are food plant records for ten species, all from Poaceae  , and nearly all from South Africa ( Table 1). The early stages of three were documented in detail by Clark (in Dickson & Kroon 1978): K. barberae (Trimen)  , K. niveostriga (Trimen)  and K. macomo (Trimen)  . Pringle & Schlosz (1997) describe a new subspecies, Kedestes niveostriga schloszi Pringle  and document its life history, which closely resembles the nominate subspecies documented by Clark (in Dickson & Kroon 1978) apart from the anal plate being black in the third instar ( Pringle & Schlosz 1997, Figure 2View FIGURE 2 b). The ovum measures 1.2 mm in diameter. The detailed description of feeding habits and shelters is informative: ‘After consuming the eggshell, the larva crawls to within a short distance of the tip of the grass blade, where it stitches the edges of the blade together to form a tube. It then feeds on the end of the blade and on the tube itself; as the tube shortens, the larva stitches the blade together at the lower end, thereby continually shortening the grass blade. At the end of the first instar, the larva moults … it then retreats down the grass blade and forms a new tube before eating away the bottom edge of the old tube. When the vacated tube has been severed, the larva reverts to feeding at the outer edge of the new tube. The blades of the host-plant grow to more than a metre in length, and become wider towards the base; the wider blade, when tubed, therefore more easily accommodates the growing larva. There are five larval instars; the first three are completed on a single blade of the host plant; in their final two stages, however, the larvae join two fresh blades together, using one or two large stitches to secure the two blades lower down, as well as a short distance from the tips; the tube is then formed midway between these two points. … Pupation takes place in a tube of dry grass which the larva stitches together.’

Most authors suggest that the whole genus will be found to be grass-feeders and this seems reasonable to us. The known ova are domed and smooth; the caterpillars are elongate, cylindrical, mostly green, the heads marked in shades of pale and dark colours; the pupa are cylindrical with extensive dark areas (Clark in Dickson & Kroon 1978, Henning et al. 1997). 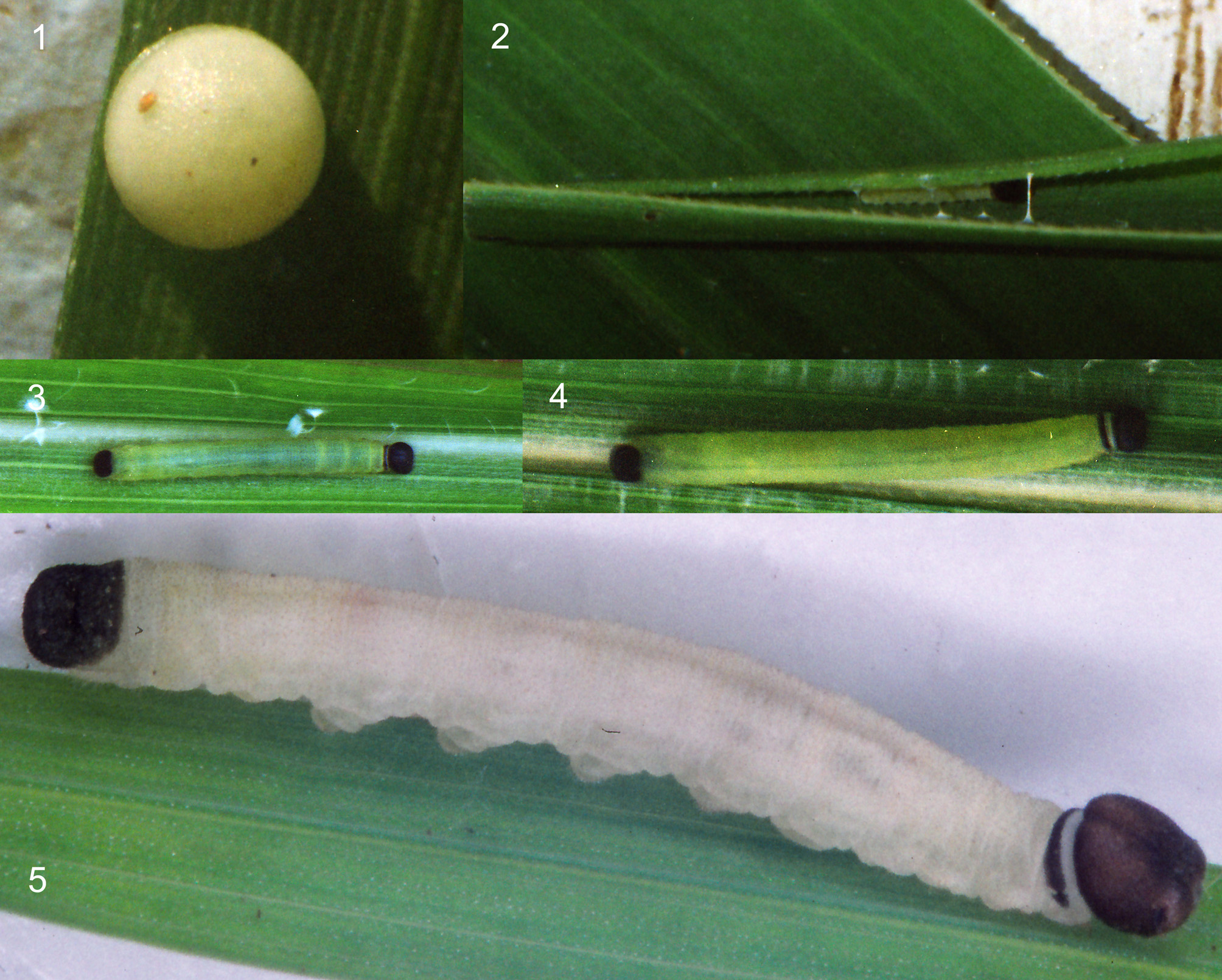