Notes. This species was described recently based on a single female from Vietnam (Storozhenko, 2014). The studied females from Thailand and Vietnam are conspecific. The description of previously unknown male is given below.

Description. Male (novum). Similar to female, but smaller. Antennae filiform, 14 -segmented, 3.2 times as long as the fore femur; middle segments (7–9 th) 16.5–19 times as long as wide. Antennal sockets situated between the lower margins of the eyes. Fastigium of vertex 1.5–1.6 times as wide as one eye seen from above; median carina of the fastigium absent; tranverse carina disappearing near the middle of the fastigium. Eyes not protruding above the pronotum in lateral view. Lateral ocelli situated between the middle of the eyes. Frontal ridge broadly rounded in lateral view. Width of frontal ridge near the base of the antennae 0.5 times the width of the 1 st antennal segment. Pronotum in dorsal view with an almost straight anterior margin; posterior process of the pronotum narrow and very long, surpassing much the apex of the hind tarsi. Median carina of the pronotum seen in profile low, distinctly sinuate in the anterior part, straight in the posterior part. Lateral carinae in the prozona well defined; prozona transverse, its width 1.1 times its length. Disc of the pronotum distinctly depressed between the prozona and the humeral angles and gently concave behind the apex of the tegmina, with a pair of interhumeral carinae; posterior process of the pronotum smooth. Hind margin of the lateral lobes of the pronotum with a tegminal (upper) sinus as deep as the lower sinus; lower side of the lateral lobes of the pronotum in dorsal view forming a short and sharp spine directed ahead. Tegmina ovate, with an acutely rounded apex; visible part of tegmen 2.3 times as long as wide; width of the visible part of tegmen 1.3 times the width of the mid femur. Hind wing almost reaching the apex of the posterior process of the pronotum or surpassing it by 1.0 mm. Upper sides of fore and mid femora sinuate and serrate, lower side with 2 small teeth. Fore femur 3.6–3.7 times, and mid femur 4.1–4.2 times as long as wide. Upper side of hind femur serrate, lower side smooth. Hind femur 3.3–3.5 times as long as wide. Upper side of hind tibia without outer and inner teeth, lamelliform, densely serrate. First tarsal segment of hind leg 1.3–1.4 times as long as 3 rd segment (without claws); ventral side of the 1 st segment with 3 subequal and distinctly pointed pads; 3 rd segment not swollen. Epiproct triangular, with a pointed apex. Subgenital plate subsquare, apex of the plate with an excision near the middle. Cerci conical, with pointed apices, twice as long as wide near the base. 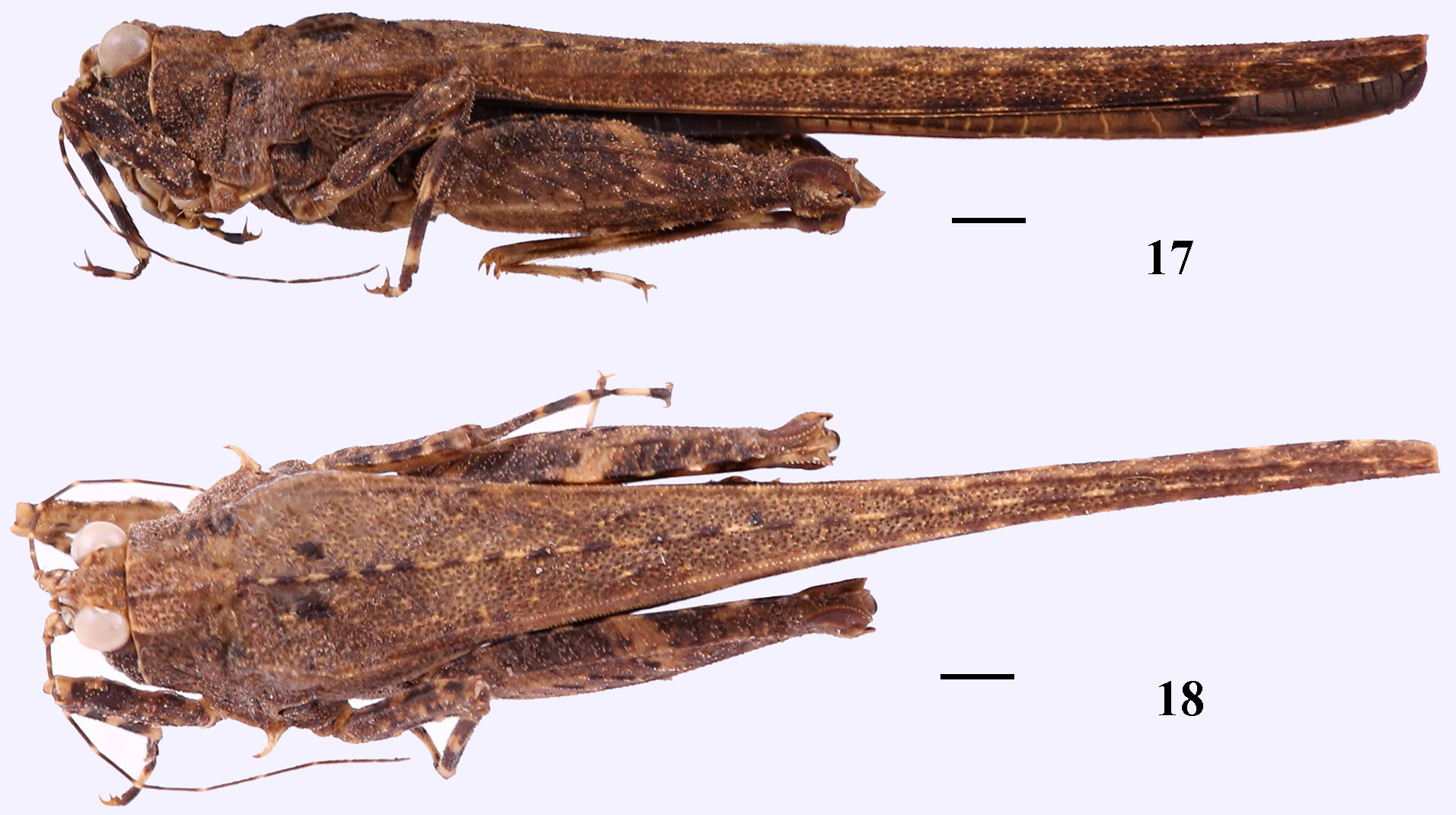