Material examined: Holotype and paratypes from lichen samples on trees, collected near Quillen Lake, Aluminé during January of 2005.

Type repository: The holotype (slide N° Nq 11.11) is preserved at the Museum of La Plata (La Plata University). The paratypes are preserved in the collection of G. Rossi and M. C. Claps

Specific diagnosis: The cuticle is largely smooth, but with 10 transverse bands of roughness. Star-shaped pores are present on the cuticle surface and on all pairs of legs. Eye spots are also present. The buccal tube contains two curvatures. The insertion of the stylet support is near the middle of the buccal tube and is nearest to the pharyngeal bulb; the pharynx exhibits apophyses, three square macroplacoids, and a small microplacoid. On all legs there is granulation along with small, smooth lunules. The eggs contain cup-shaped processes and are not covered by a membrane.

Description of the holotype: The body length is 208 µm with posterior eyes present ( Fig 5 View FIGURE 5 A). The cuticle is smooth, with 10 transverse bands and pores having two shapes: small and round (nearly 1 µm in diameter) or conspicuously star-shaped. These stellate pores are aligned in longitudinal rows and separated, and the round rings are intermixed ( Fig. 5 View FIGURE 5 E). Each leg contains stars and granulation that appear denser at the end of the legs on all four pairs ( Fig. 5 View FIGURE 5 C). The mouth is anteroventral with a buccal tube 23 µm long and 2 µm wide (pt = 8.7), having two bends (anterior and posterior). The pharyngeal bulb is with noticeable apophyses, three near-square macroplacoids, and a small microplacoid. The stylets are inserted at 16 µm (pt = 69.6). The macroplacoid lengths are very similar: the first, 2.2 µm (pt = 9.6); the second; 2 µm (pt = 8.7); and the third, 2.3 µm (pt = 10.0). The small microplacoid is 1 µm long (pt = 4.3). The macroplacoid row is 9 µm long (pt = 39.1) ( Fig. 5 View FIGURE 5 B). The claws are short and robust, with smooth lunules and the primary branches of internal and external claws have distinct accessory points ( Fig. 5 View FIGURE 5 D).

The eggs have a non-reticulated shell. The egg diameter, with and without processes, fluctuates between 82–86 µm and 68–70 µm, respectively. There are ca. 22 processes around the egg's circumference and nearly 62 are found within a given hemisphere. The processes are in the form of an egg cup. Each process is not covered by a separate membrane, is without ornamentation at the base, and has a length of 7 µm and a width at the base of ca. 5 µm ( Fig. 5 View FIGURE 5 F).

Etymology: This species is named after Dr. Sandra Claxton of the Macquarie University, Australia in recognition of her contribution to our knowledge of the genus Minibiotus   in particular and to our understanding of the tardigrades in general.

Remarks: The measurements and pt values of selected morphological structures for all specimens are given in Table 5 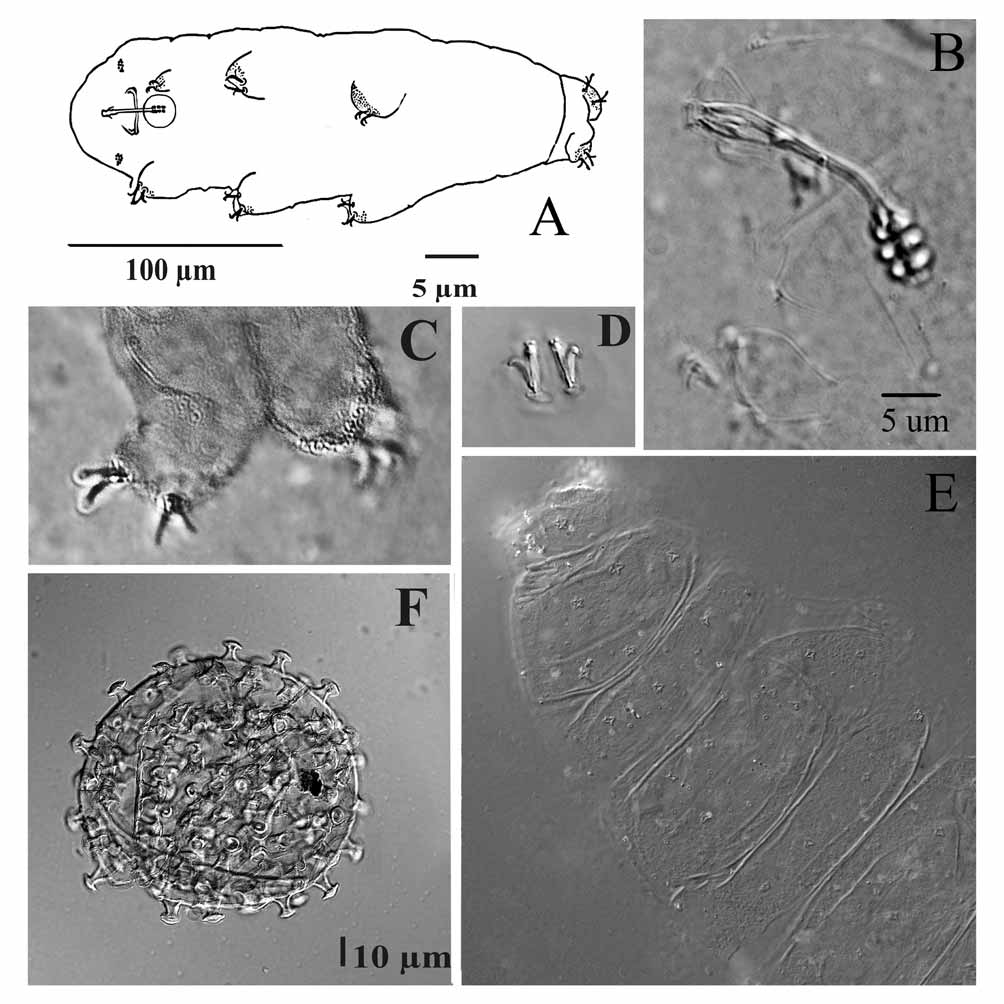 FIGURE 5. Minibiotus claxtonae sp. nov. A, habitus; B, buccopharyngeal apparatus in lateral view; C, claws of the fourth pair of legs, showing the granulation; D, detail of a claw, showing the lunules; E, cuticle with the round and starshaped pores; F, egg.

FIGURE 5. Minibiotus claxtonae sp. nov. A, habitus; B, buccopharyngeal apparatus in lateral view; C, claws of the fourth pair of legs, showing the granulation; D, detail of a claw, showing the lunules; E, cuticle with the round and starshaped pores; F, egg.