Head black with apex of vertex, mandibular plate, maxillary plate and tylus blood-red, eyes red, oval and arranged transversely; vertex rectangular, smooth, without median carina apparent; ocelli red, closer to each other than to the eyes, separated by about one and a half diameter of one of them. Tylus quadrangular without median carina distinct, with a fine pubescence. Antennae black, cylindrical pedicel with few sparse setae; basal body of flagellum with subcylindrical arista, shorter than pedicel. Postclypeus blood-red, inflated, with convex profile, not directed backward, swollen, with longitudinal carina poorly marked, lateral grooves slightly marked. Anteclypeus black, equal in size to last rostral segment; rostrum reaching apex of mesocoxae. Pronotum black, hexagonal, without median carina, finely punctured, anterior margin straight, lateral-anterior margin straight, lateral-posterior margins with slight sinuosity, posterior margin grooved. Scutellum black, with slight central concavity and without horizontally ridges. Tegmina black, grossly punctured, with round red spot at apex of clavus and two other spots, also rounded, between middle and apical third of tegmina. Latter spots may be connected by narrow and faint band, venation rather distinct. Wings hyaline with brown and distinct venation, Cu 1 thickened at base. Abdomen and legs black. Hind tibia with two spines, basal one equal to those located in apical crown, crown with 12 spines distributed in two rows, basitarsus with 10 apical spines distributed in one row, covered by dense layer of setae. Subungueal process developed.

Comments. Ferorhinella balatra   is similar to F. brevis ( Walker, 1851)   with respect to the characters of the genitalia and external morphology. However, F. balatra   exhibits sexual size dimorphism: contrary to what normally occurs in Cercopidae   , females are smaller and more rounded than males, which are elongated and larger. Because females of F. brevis   are undescribed, it is unknown whether this kind of SSD is a characteristic of this genus.

Specimens of F. balatra   were collected from grassy vegetation in mountainous regions of Paraná (the Pico Paraná is one of the highest mountains in southern Brazil), suggesting that this species has a high altitude distribution, perhaps including the alpine peaks of the southern Brazilian highlands.

Etymology. Balatra   in Latin means clown or a buffoon at medieval courts. The species name refers to the colors of the tegmina and postclypeus, which are evocative of the makeup and the nose of a clown. 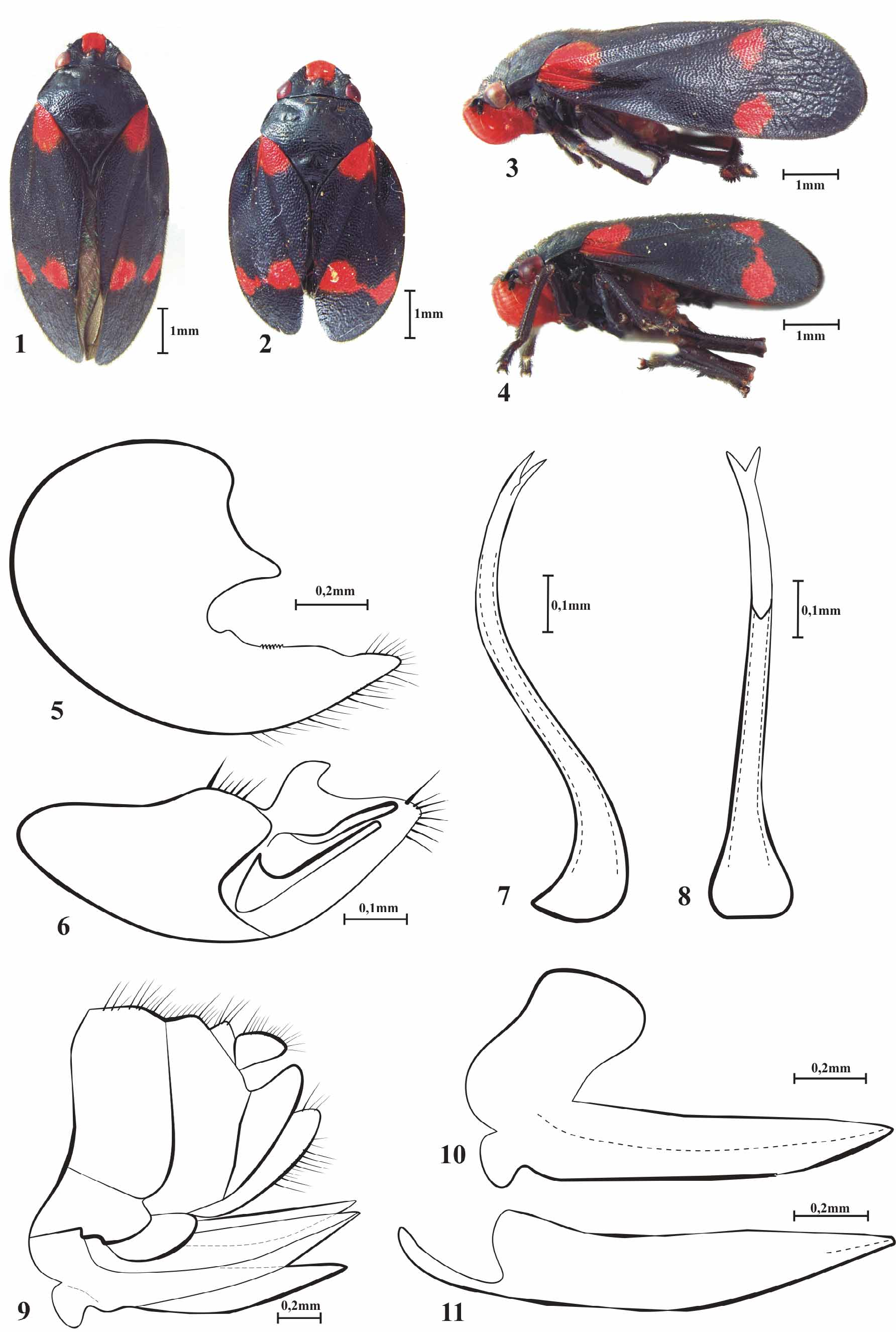