Diagnosis. Pheles caatingensis  sp. nov. belongs to the tribe Riodinini  Grote 1865 as indicated by a deeply notched posterior section of the tegumen ( Fig. 9View FIGURES 7 – 10), and a pedicel forming a posterior tube-like projection not attached to the valvae of the male genitalia ( Harvey 1985). Superficially, the new species is closest to the genus Pheles  Herrich- Schaeffer [1863], particularly with the species Pheles strigosa, (Staudinger, 1876)  and Pheles atricolor (Butler, 1871)  sharing the orange scaling on the collar, orange palpae with a short third section, orange scaling on the abdomen around the genitalia, and wing shape and black coloring with a white apical spot on the forewing and with blue streaks between the veins. However, the genitalia of both sexes of P. caatingensis  sp. nov. are different from those of Pheles  ; the male genitalia lack the scobinate patch, or vogelkopf on the end of the pedicel, and have instead a fork serving as a guide for the aedeagus. The aedeagus is modified with a long, curved point on the end. The female genitalia have a highly modified ostium bursae with an evaginated sinus vaginalis and a large, notched medial lamella postvaginalis, all characters not found in Pheles  . The antennae are clubbed, and the shaft is without heavy scaling found in Pheles  . However, because of the superficial similarities, P. caatingensis  sp. nov. is provisionally left in the genus Pheles  until its proper generic placement can be ascertained.

Genitalia: (Figs. 7,8,9) Uncus slightly bilobed, tegumen short, with a deeply indented notch on the posterior margin ( Fig. 9View FIGURES 7 – 10), falces curved, sharp, posterior extension slightly indented dorsally; vinculum fused to posterior margin of tegumen at base of the notch, vinculum narrow, curving L –shaped with small flange and attached to ventral center of valvae without saccus; valvae cup shaped, extending caudad to a sharp, upward curving point; dorsally from the valvae extends a high, elaborate transtilla fusing the posterior half of the valvae with two sharp, dorsally projecting processes on each side; aedeagus curved, with a long, curved, pointed tip; pedicel forms a posterior tube –like projection from the aedeagus, terminating in a wide, bifurcated structure supporting the aedeagus and connected basally to the valvae.

Wing shape: Forewing, same as male with distal margin slightly broader, hindwing same. Dorsal surface: Ground color black as in male, with white scaling along the veins and the white post discal transverse band slightly wider than on male; margin and fringe white. Ventral surface: Ground color black with veins outlined in white with parallel lines in the cells distad of white band on forewing and on hindwing and some orange scaling at base, as on male.

Genitalia: ( Fig. 10View FIGURES 7 – 10) Corpus bursae round with two long, curved and pointed invaginate signa; ductus bursae leaves corpus bursae as wide, short, lightly sclerotized tube; ostium bursae funnel shaped, bent to the right when viewed caudad; the connection to the ductus bursae is a complex sclerotized evaginated tube, the sinus vaginalis, connected to a smaller tube forming a receptacle for the ductus seminalis; the ostium bursae ventrally extends into the medial lamella postvaginalis, which is a broad, deeply notched plate with two rounded processes at the base; papillae anales rounded, deeply bifurcated and pubescent.

The holotype is deposited in the Museu Unicamp, Campinas, São Paulo)

Paratypes are deposited in the Museu do CEMAFAUNA-Caatinga, Univasf, Petrolina, and the Coleção Entomológica Pe. J. S. Moure, UFPR ( DZUP), and the collection of C. Callaghan, Bogotá, Colombia.

Etymology. The species is named after the biogeographic Caatinga Province in which it is found.

In addition to human activities, the gallery forest habitat is threatened by Cryptostegia grandiflora R. Br.  ( Apocynaceae  ) an exotic Southeast Asian plant, which occurs throughout the margins of Riacho dos Porcos, and in some spots has replaced the local vegetation ( Fig. 15View FIGURES 11 – 16). Due to its known aggressiveness ( Grice 1997; Silva & Cavalcante 2009), monitoring this species is important to prevent further damage to the already compromised local gallery forest, in addition to its effects on the biology of Pheles caatingensis  sp. nov. The vines and foliage of this plant cut sunlight from the forest floor, limiting the presence of understory vegetation ( Fig. 16View FIGURES 11 – 16). This has an impact on the habitat of Pheles caatingensis  sp. nov., for in areas where the plant was common, the butterfly was notably infrequent.

Pheles caatingensis  sp. nov. individuals concentrate in the shade of large trees, resting on the lower surface of the leaves with wings spread and antennae together (Figs. 5,6). On April 25, 2013, after sunset, numerous individuals possibly displaying leck courtship behavior were seen flying rapidly, in short circular patterns around two Geoffroea spinosa  trees ( Fig. 12View FIGURES 11 – 16). No adults were observed feeding on flowers, although one individual was observed on the wet soil on the river margin ( Fig. 11View FIGURES 11 – 16). From the start of the rainy season in December, 2012 to April 2013, the population had increased from about 30 individuals to hundreds, mostly concentrated in an area of gallery forest about 45.000 m ², although individuals were recorded all along the Riacho dos Porcos. However, the population falls during the dry season from June to December.

At the same location, there is a large population of Melanis aegates (Hewitson 1874)  , (Figs.17,18) with individuals displaying similar color pattern and behavior to Pheles caatingensis  sp. nov. including leck behavior at sundown, as noted for other Melanis  species ( Callaghan 2003). M. aegates  is also recorded in a similar habitat 300 kilometers northwards in the Ceará State (4 o 33 ’ 40.18 ’’S; 39 o 45 ’ 44.70 ’’W, 470m) according to specimens in the Universidade Federal da Paraíba ( UFPB) entomological collection but no Pheles caatingensis  sp. nov. were seen at this locality (C. E. Nobre, pers. obs.).

The black and white wing pattern with blue veins and red/orange head coloring is common throughout the Amazon basin, both in day flying moths, particularly Geometridae  , and butterflies of the family Riodinidae  . Among the latter are species of Pheles  , as mentioned above, and the genus Esthemopsis  of the tribe Symmachiini  . Among the species of Esthemopsis  sharing these patterns are E. alicia (H.W. Bates, 1865)  , E. pherephatte caeruleata (Godman and Salvin, 1878)  and E. teras (Stichel, 1910)  . This mimicry complex is particularly common in the western Amazon, from eastern Colombia to northern Bolivia (Callaghan, unpublished data).

Distribution. ( Fig 23) The species appears to be rare and local but widespread. A few individuals were located elsewhere along the Riacho dos Porcos, but not in the same numbers as at the type locality. In June, 2013 an additional colony was located in Cabrobó municipality Pernambuco state (8 19 ' 39.95 '' S, 39 20 ' 23.38 '' W) in a sparse forest consisting mainly of algaroba, ( Prosopis julifolia  ,) along a nearly dry stream bed. There are also specimens in the Coleção Entomológica Pe. J. S. Moure, UFPR ( DZUP) from northern Bahia State (Juazeiro, 300m). These findings suggest that Pheles caatingensis  sp. nov. is widespread in the Caatinga in other similar humid habitats well into the dry season. 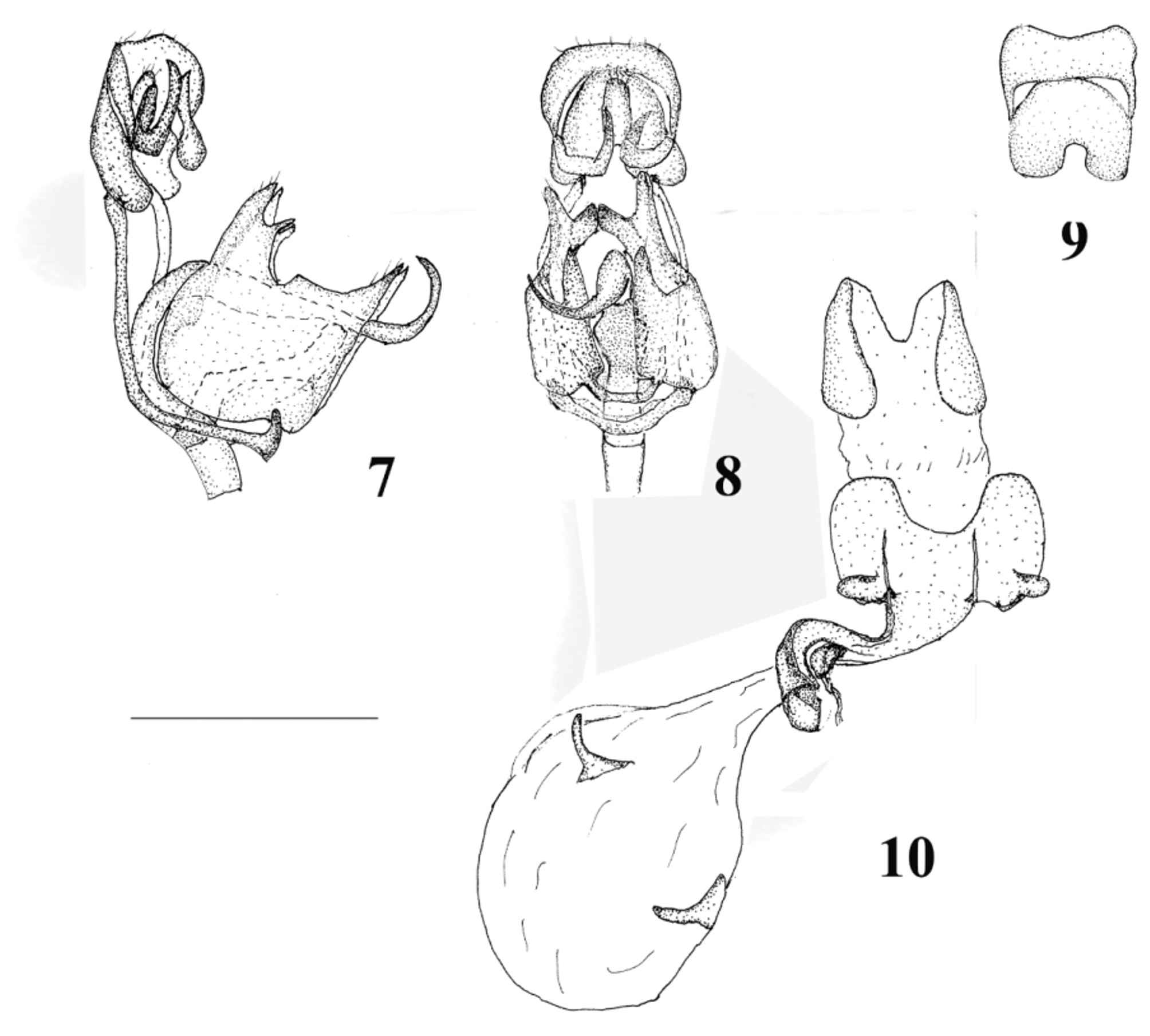 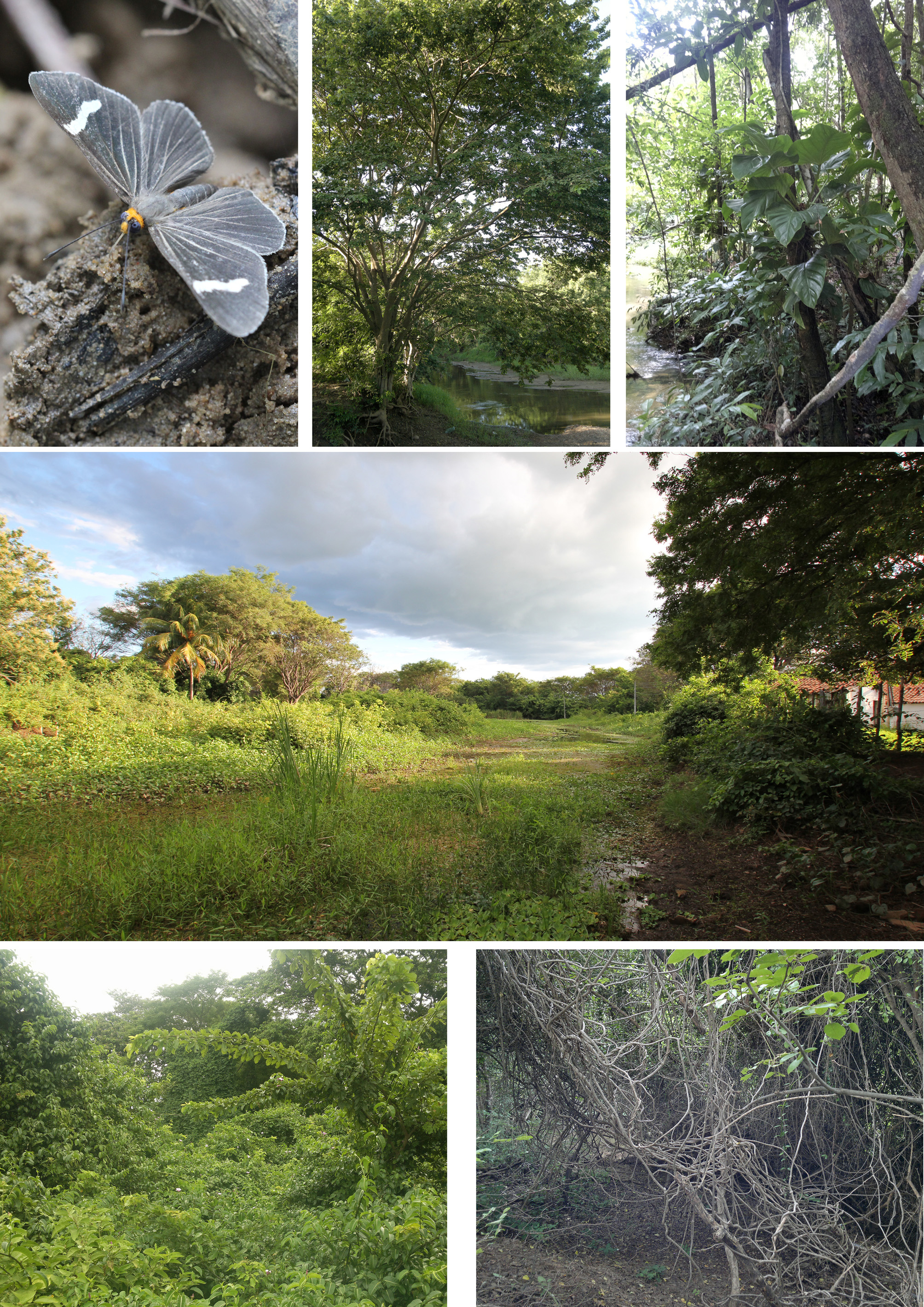 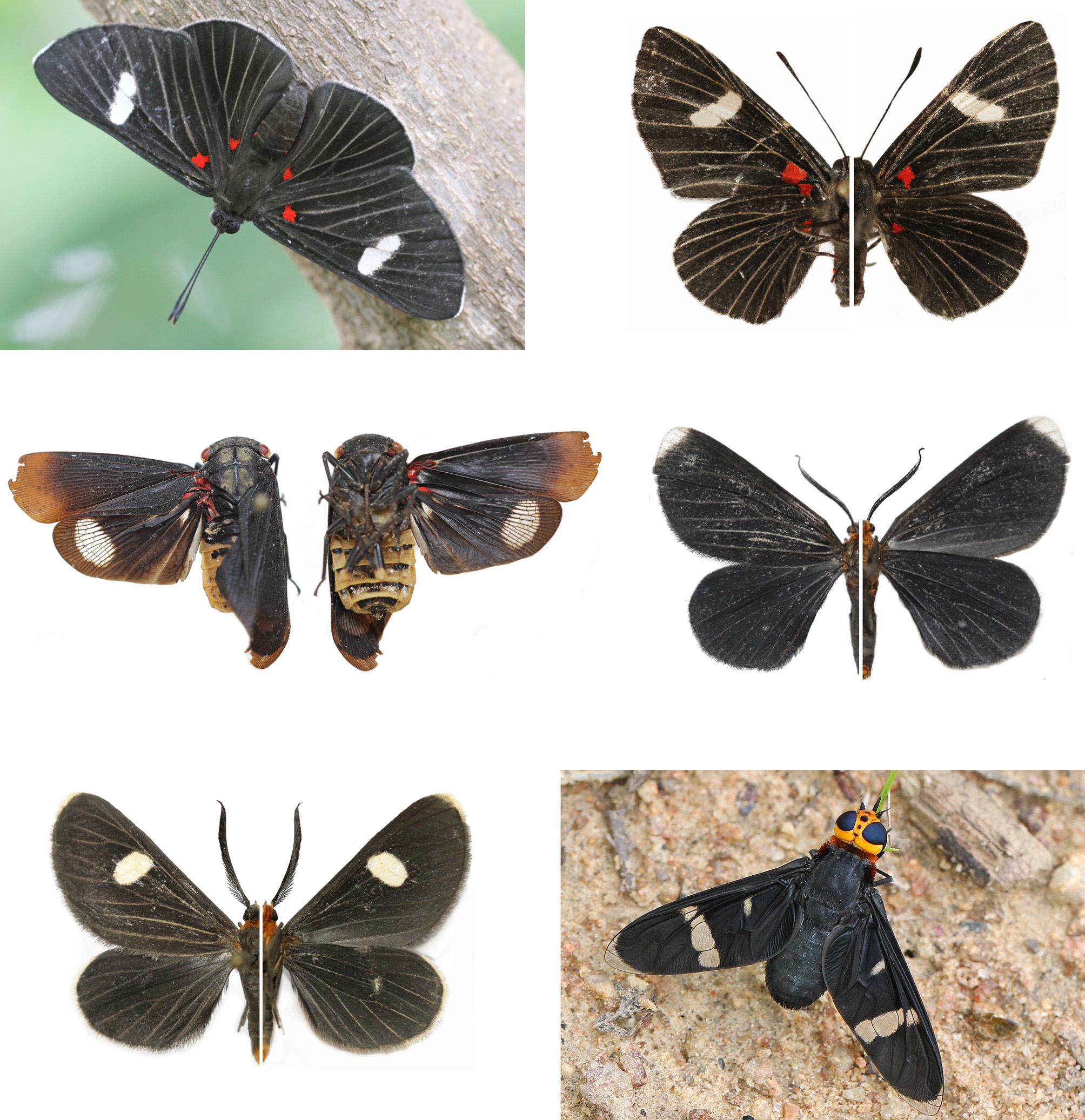