A new species characterised by nocturnal flowers, elliptic and delicate leaves, a clear distinction between the perianth

Phenology and Floral Biology:—Collected in flower between January and March, in the area where the type collection was made. In April a long drought affected the region and the lake completely dried up. Fruit were not seen. The second collection of the species was in June in an area close to where the type collection was made. The small lake was almost dry and the plants were dwarfed, due to the drought that continued at least up to the end of the year. Each of these small plants developed from a single proliferate pseudanthium that commenced vegetative growth.

Nymphaea vanildae  has protogynous flowers with two nights of anthesis. On the first night the flowers open around 8:00 pm and close at 11:00 pm. The flower emits a strong odour of acetone and the receptive stigmatic region appears bright and moist. The carpel appendages and the stamens are perpendicular to the surface of the water, and the anthers are closed. On the second night of anthesis the sepals and petals of the flowers open at 7:00 pm, but the anthers remain closed and the carpel appendages cover the stigmatic region, which appears dull and dry. At 8:00 pm the three series of the outer stamens are perpendicular to the water surface and the anthers begin to release pollen grains. Also there is a change in the position of the inner series of stamens and the anthers begin to release the pollen. Around midnight all the flowers are closed and they tumble over the water, starting the process of decomposition. This procedure is indicative of the absence of pollination, since in all species of Nymphaea subg. Hydrocallis (Planchon) Conard (1905: 200)  the flower closes after pollination and the peduncle bends and submerges the flower, after which the fruit will develop.

Habitat and distribution: — Nymphaea vanildae  is restricted to a small area in a temporary small lake near the São Francisco River, in Pernambuco State ( Fig. 3View FIGURE 3). The two other species of the genus common in the same region are Nymphaea lasiophylla Mart. & Zucc.  in Zuccarini (1832: 364) and N. pulchella De Candolle (1821: 51)  , the first occurring sympatrically with N. vanildae  .

Etymology: —The specific epithet was chosen to commemorate the late Maria Vanilda Morais Oliveira, technician in the Plant Taxonomy Laboratory of the Universidade Estadual de Feira de Santana, who, for many years, supported teachers and students taking various botany courses. She was an enthusiastic amateur botanist and took a special interest in plants of medicinal use.

Affinities and notes on critical characters: — Nymphaea vanildae  has flowers with nocturnal anthesis, the petals are not spirally arranged, the ovary is syncarpic and has a Neotropical distribution, therefore it is included in Nymphaea subg. Hydrocallis, sensu Wiersema (1987)  . The species can be characterized by the vegetative morphology, with elliptic, membranaceous to subcoriaceous leaves that have a green chestnutbrown coloration and vinaceous spots, and brittle petiole. Such characters differentiate this species from the two other water lilies occurring in this semiarid region.

Due to the presence of proliferating pseudanthia with more than three series, N. vanildae  is similar to N. prolifera Wiersema  , a species described as occurring from northern Argentina to Central America ( Wiersema 1984). Both have similar coloration and numbers of sepals, in both the flowers and the pseudanthia. Analysis of the specimens Walter 136 (K), Pedersen 8094 (K), 7743 (K) and 8335 (K), all cited by Wiersema (1984), showed that N. prolifera  possesses flowers with strongly clavate carpellary appendages and 3 to 4 series of proliferating pseudanthia alternating spirally with series of leaves, as well as ovate leaves lacking spots on the lamina, whereas N. vanildae  has elliptic leaves, the lamina strongly spotted and with linear carpellary appendages.

The combination of the above-mentioned characters makes N. vanildae  a unique species from any other in the genus.

Conservation status: —This species is estimated to be Critically Endangered (CR B1 ab), with occurrence estimated to be less than 100 km 2 in an extremely fragmented area. The lakes in the semiarid region, particularly in the Caatinga, are a priority for conservation in Northeast Brazil, especially with the current level of ongoing anthropogenic disturbance. 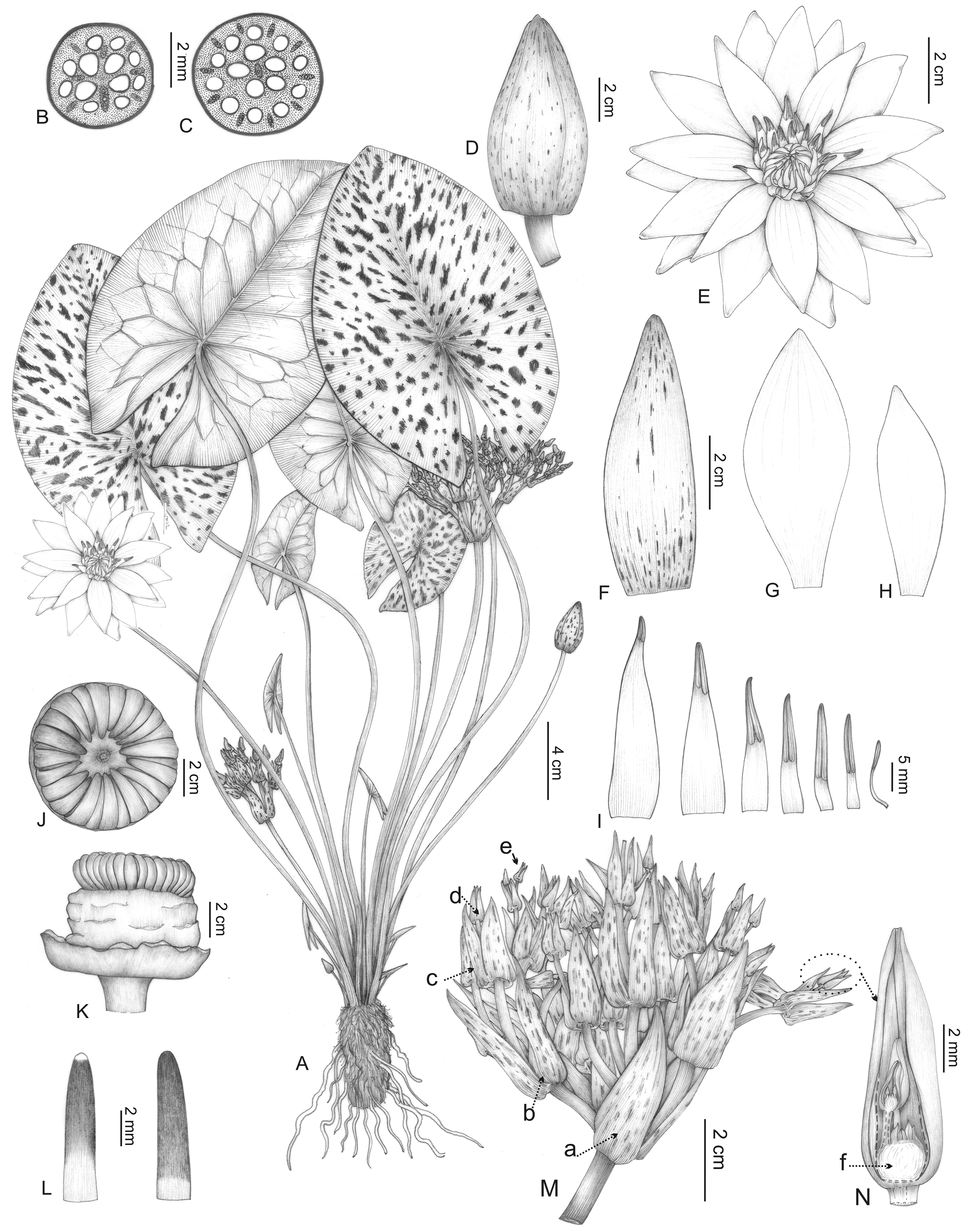 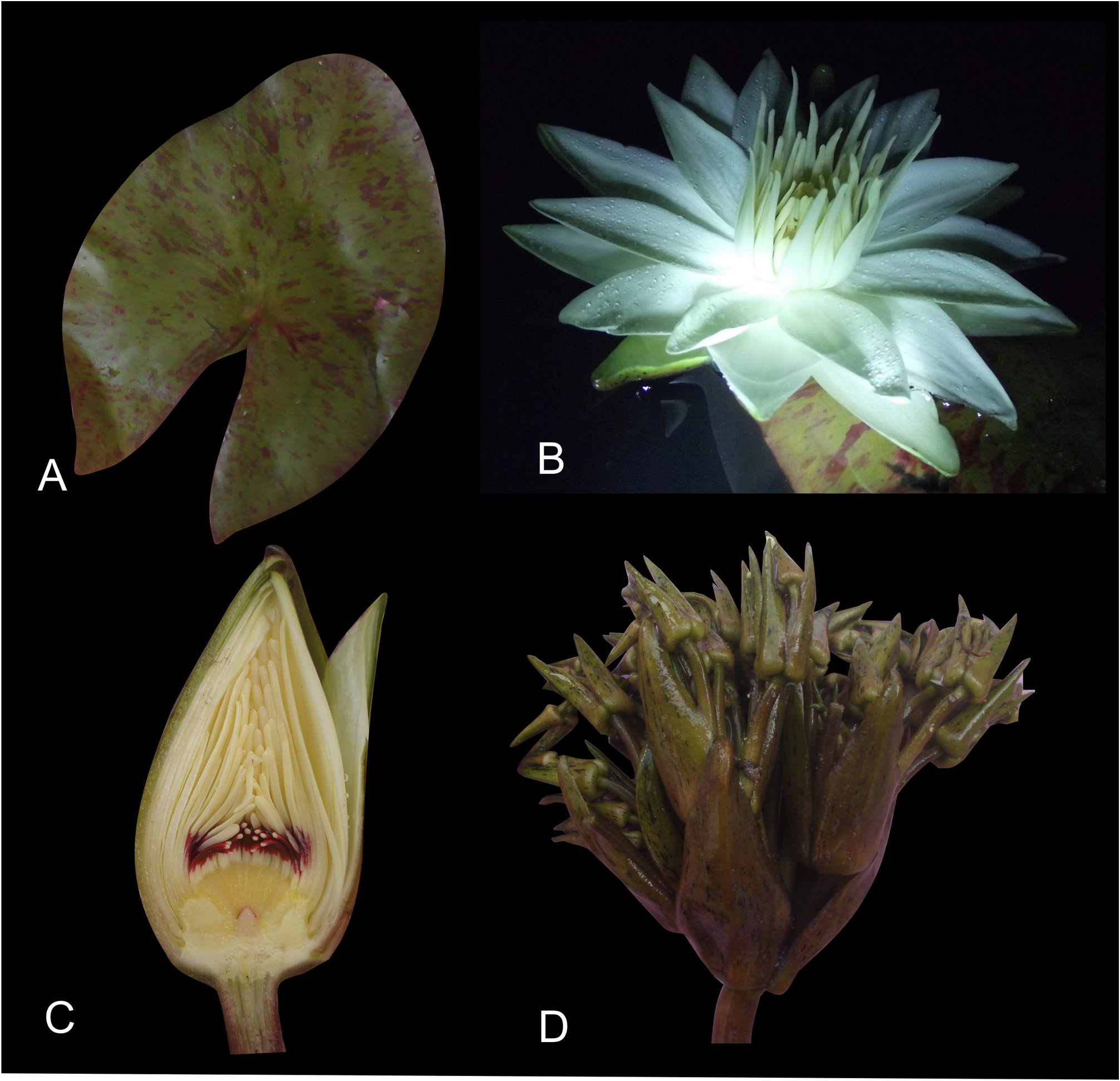 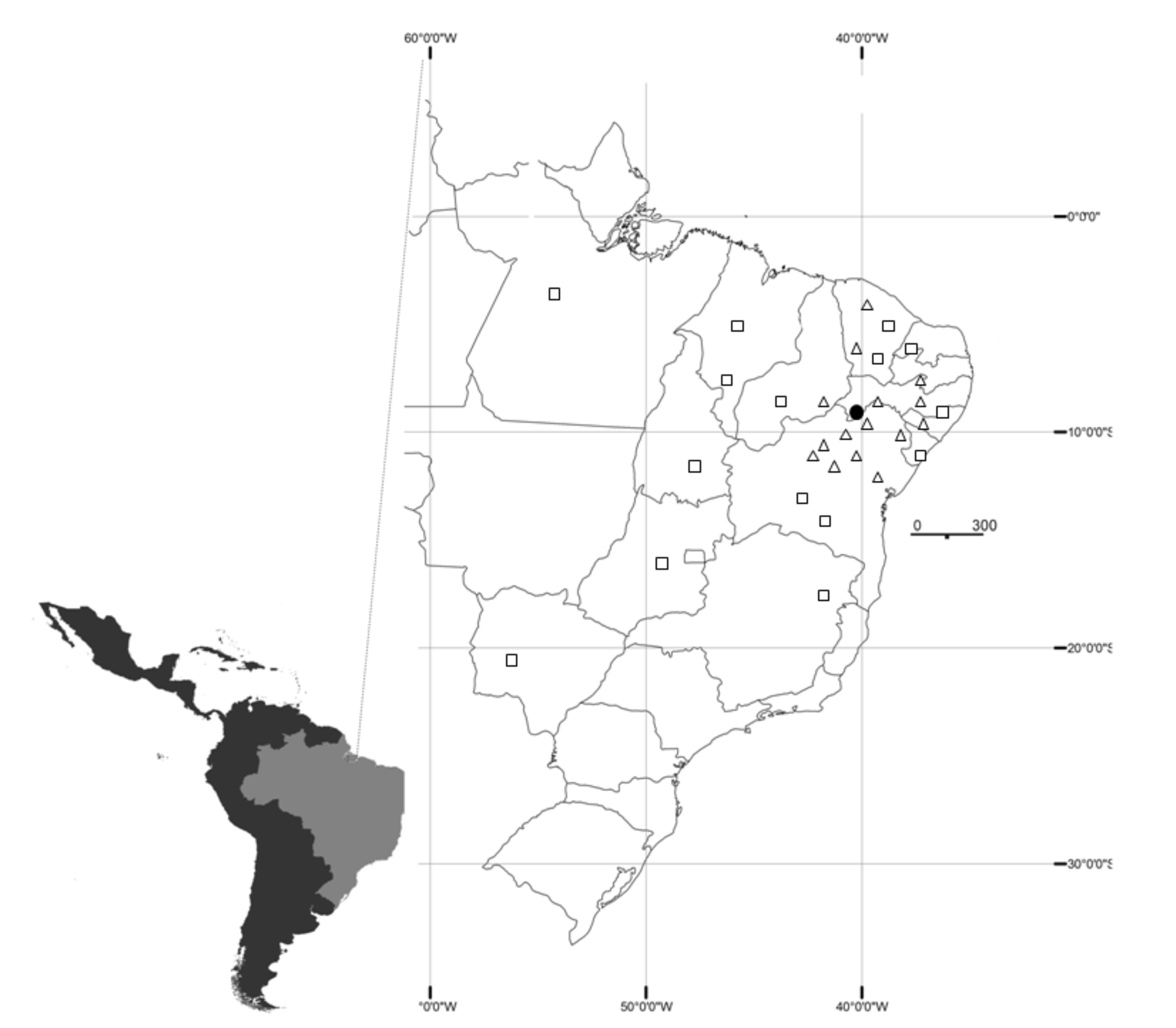