Description. Finger-shaped or irregularly cylindrical ( Figs 53View FIGURE 53 a), up to 3 x 1 cm. Color in alcohol pale red brown or beige. Inside the color is slightly paler. One sample (9367, Figs 53View FIGURE 53 a) consists of three fragments, the other (9884) of two, in both cases it is not clear whether the fragments are from the same specimen. Surface smooth, detachable, no apparent oscules. One of the paratype fragments shows lighter spots on the surface. Consistency rather soft.

Remarks. Among the many described Erylus  species in the Greater Caribbean and North East Brazilian waters, the two specimens reported here are assigned to Erylus incrustans Lehnert & Van Soest, 1999  as it has almost identical aspidasters and shapes of the other spicules match closely. I compared my material with the holotype, ZMA Por. 13510, from 70 m off N Jamaica  . Sizes of the oxyasters in the type are slightly smaller (32–35 µm), and the encrusting habit of the Jamaican holotype is not shared with our specimens. Both features are assumed to be subject to considerable variation. The length of the rhabds of (rare) triaenes of the type were given as 152–163 µm, but my observation of the few triaenes present in the slides made additionally for the present study is that the rhabdomes can be larger than 300 µm. This is apparently not a difference between the Guyana material and the type.

There are several Erylus  species in the general region (including nearby North East Brazil) that appear close. Rather similar aspidasters are found in E. trisphaerus ( De Laubenfels, 1953)  (as Unimia  ), recently re-described by Ulgalde et al. 2015. The shape is, however, distinctly trilobed and also smaller in E. trisphaerus  , and the aster complement of that species comprises three categories instead of two. The widespread E. formosus Sollas, 1886  has also rather similar aspidasters, but these are longer, narrower, and tapering towards both ends. E. latens Moraes & Muricy, 2007  likewise has narrow aspidasters, but these are more gradually tapering than those of E. formosus  . Its aspidasters are up to 302 µm long, almost twice as long as those in the present material. It also has a third category of smooth oxyasters.

Most other Caribbean and North East Brazilian Erylus  species differ clearly in having thin-bladed oval aspidasters, differing among themselves in details of euasters and other spicular details. 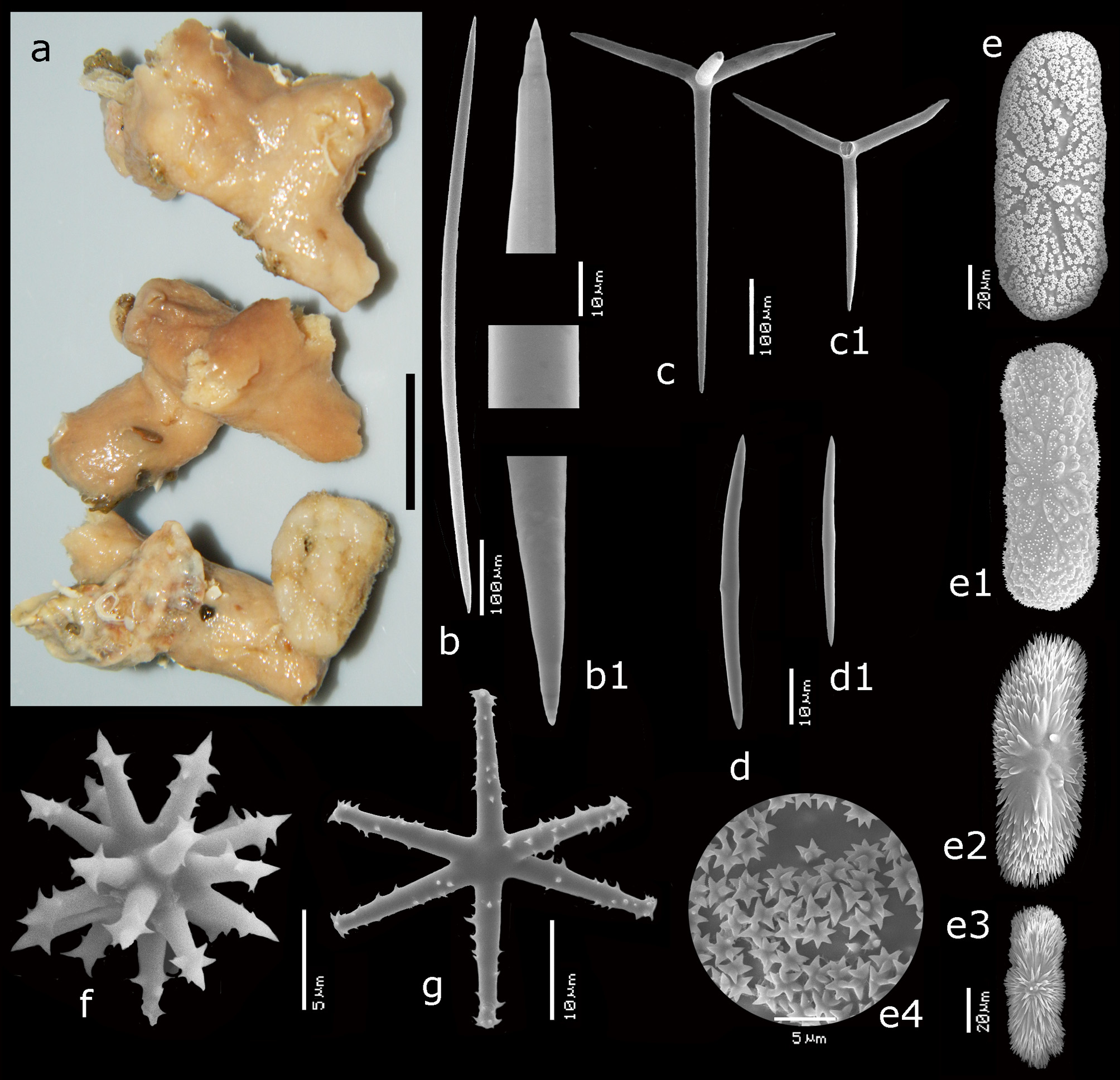