Etymology: The name of this genus is based on the monster from ancient Greek mythology with the head of a bull and the body of a man, in reference to the dorsally bifurcate male genital uncus of the type species.

Body: Dorsal surface of thorax and abdomen dark brown and ventral surface pale brown in M. lampros  , and dorsal surface of thorax rufous brown and ventral surface pale brown in M. charessa  (removed abdomen of unique holotype was probably white); eighth sternite of M. lampros  a simple rectangle with a very small distal indentation (eighth sternite shape in M. charessa  unknown); all legs brown with yellow scaling in M. lampros  , and whitish in M. charessa  , tarsus of foreleg unimerous, coxa of medium length for family, midleg and hindleg with a tibial spur and a group of spines at inner distal tip of tibia and spines along inner margin of all tarsal segments.

Genitalia ( Fig. 4View FIGURES 3 – 4): Uncus in M. lampros  approximately rectangular in lateral view, with a prominently bifurcate dorsal posterior margin and a pair of elongate, ventrally and inwardly directed projections at ventral margin, uncus in M. charessa  plain and approximately rectangular in lateral view, lateral “window” dorsally separated; falces of average size and shape for family; vinculum sinuate and slightly enlarged medially, saccus absent; valvae narrow, elongate, and approximately rectangular, with an elongate basal lateral bulge, valvae fused dorsally at posterior tips, posterior tip of each valve in ventral view in M. lampros  with a narrow and apically downturned process; aedeagus short and of medium width, with pointed posterior tip opening dorsally and to right, and rounded anterior end opening to right, lip of posterior tip curled to right in M. lampros  ; everted vesica of M. lampros  short and broad, with one short membranous process at dorsal base of vesica and another more posteriorly at ventral margin, and a single long, ventrally directed, “blade”-like cornutus that projects away from membrane towards anterior tip, uneverted vesica of M. charessa  (as illustrated by Stichel (1910 – 11 )) with a continuous row of about eleven small cornuti and a single larger cornutus anteriorly; pedicel of M. lampros  posteriorly elongate with sclerotized lateral margins, pedicel of M. charessa  simple and strap-like.

Body: Foreleg with spines at inner distal tip of tibia and tarsal segments one to four.

History of classification: The two species placed here in this new genus were described in Lemonias  and Echenais  , and treated in two different species groups of Echenais  by Stichel (1910 – 11, 1930–31). Not previously recognized as being close relatives, lampros Bates, 1868  , and charessa Stichel, 1910  , are here transferred to Minotauros  (n. combs.) from Adelotypa  . The female of M. charessa  remains unknown, whilst the female of M. lampros  was only recently discovered, and is associated with the male for the first time here.

Diagnosis and systematic position: The genus Minotauros  is erected here primarily for lampros  , and the placement of charessa  in Minotauros  can only be tentative at the present time. In a family that is full of extraordinary rarities, M. charessa  is one of the most poorly known species. It was described nearly a hundred years ago from a single male specimen collected on the Rio Juruá in western Brazil (Stichel, 1910), and to my knowledge has never been collected again. In addition, the abdomen of the holotype, housed in the Zoologisches Museum of the Humboldt Universität, in Berlin, Germany ( ZMHU), was long ago removed for dissection, and may well be lost. Despite repeated searches of the ZMHU by myself and museum staff, no trace of the genitalia dissection has ever been found. Although the male genitalia of the holotype were, very unusually, illustrated by Stichel (1910 – 11), his illustration is somewhat stylized and almost certainly not entirely accurate. As a consequence, knowledge of the genital morphology of M. charessa  remains incomplete. Stichel’s illustration does indicate the presence of numerous small cornuti in the uneverted vesica, and a small process on the valvae that are not present in M. lampros  . The wing coloration of M. charessa  also differs from that of M. lampros  , but because M. charessa  shares several unusual wing characters with M. lampros  , I place it for now in Minotauros  .

Minotauros lampros  possesses numerous unique apomorphies, including a dark royal blue dorsal wing pattern, a prominent raised pad of yellow androconial scales across the middle of the costal margin on the dorsal hindwing (ultrastructure illustrated by Hall & Harvey (2002 b)), a prominently bifurcate posterior margin to the uncus, a pair of elongate, ventrally and inwardly directed projections at the ventral margin of the uncus, a unique valve shape, a laterally curled posterior lip to the aedeagus, a very large, blade-like aedeagal cornutus, a posteriorly projecting and laterally thickened pedicel, and a unique arrangement of sclerotized structures in the vicinity of the female genital ostium bursae. Minotauros lampros  and M. charessa  have very similar wing shapes and spotting patterns on both wings, and share a convex forewing anal margin, which is found elsewhere in the Nymphidiina only in the unrelated “ Setabis  ” tapaja (Saunders, 1859) and an undescribed relative. They also share a prominently visible patch of androconial scales along the costal margin of the dorsal hindwing, which is found elsewhere in the Nymphidiina only in the unrelated Pandemos pasiphae (Cramer, 1775)  . As outlined in the diagnosis for Livendula  , the species of Minotauros  appear to be most closely related to those of Livendula  .

Distribution: Both species of Minotauros  appear to be largely confined to the lowlands of the western Amazon, with an outlying record of M. lampros  from the mountains of southern Guyana. 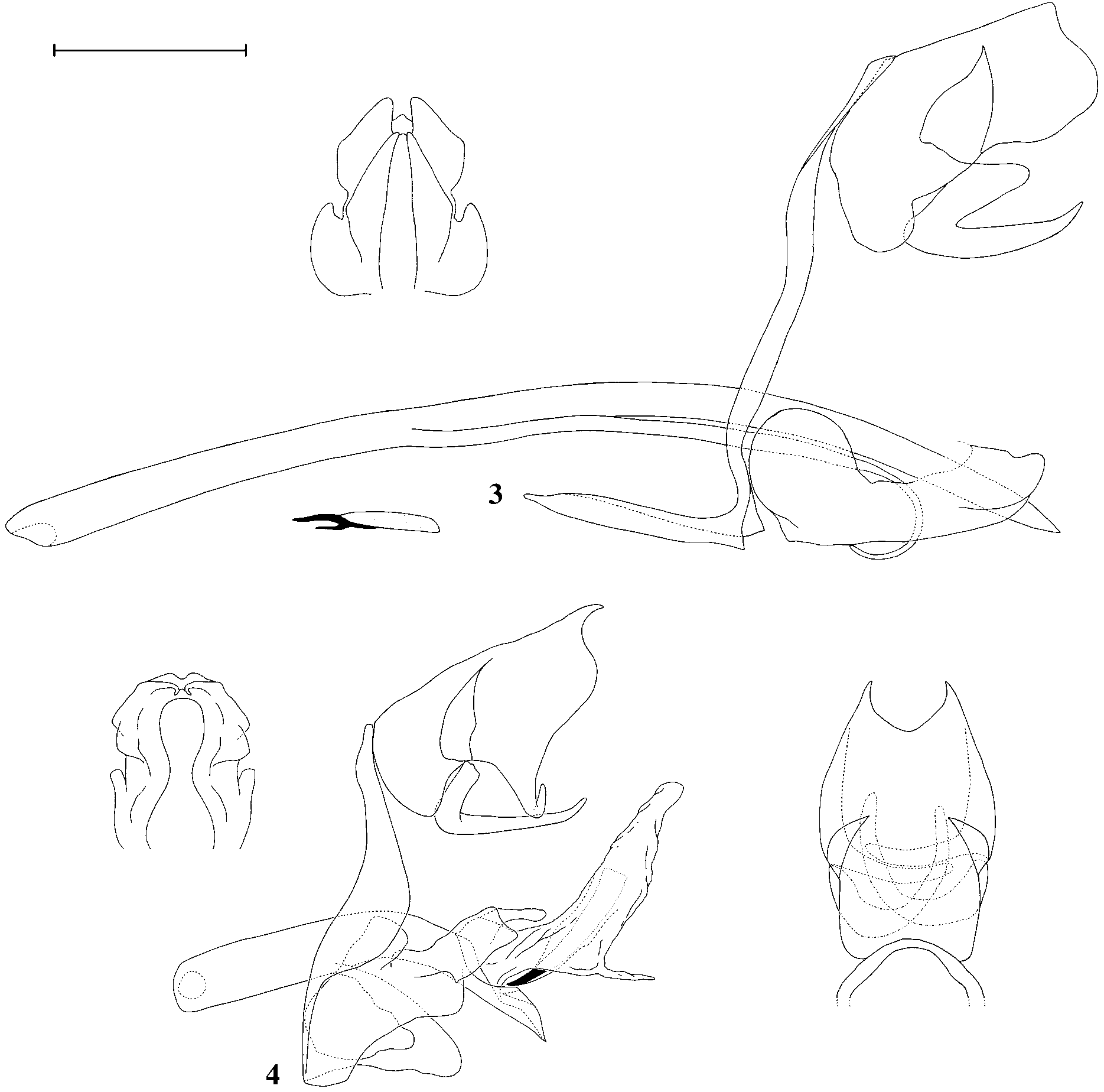