Thorax: mesonotum, shining dark emerald green, bronze green or blue-black, anepisterum and, katepisternum shining metallic green, blue-black or black, anepimeron and other sclerites subshining black. Anepisternum with 1 anterodorsal and 2 posterior setae. One seta on both proepimeron and proepisternum. Katepisternum with 1 seta placed centrally near dorsal margin with a scattering of setulae anterior to the seta, these usually short but in some species are up to 0.5x length of the seta. Scutellum; disc bare, shining green, on margin between lateral and apical setae with 1–2 setulae, 0–1 between apical setae. Calypteres pale, white or yellowish with whitish fringes. Wings clear or occasionally with apical brown shading. Wing length 2.5–3.1mm. Legs black, all basal and 2nd tarsomeres pale, apical tarsomeres darker.

Male terminalia: lying within abdomen with posterior margin of epandrium orientated ventrally, laminate surstyli situated ventral to epandrium lying parallel to abdominal sternites ( Fig 2 View FIGURES 2 – 3 ) as compared to L. smaradgi (Walker, 1849)   in which the ventral margins of the epandrium are orientated ventrally and the cerci lie posterior to the epandrium ( Fig. 3 View FIGURES 2 – 3 ). Epandrium; flattened in the posterior-anterior plane, 9th and 10th terga not completely fused, 9th tergite a rounded or angular lobe attached to the anterior surface of the 10th terga ( Fig. 4 View FIGURES 4 – 5 t9, t10). Posterior margin, just ventral to base of cerci, with an incurved medial lobe of varying size, surface with or without a scattering of small spicules ( Fig. 5 View FIGURES 4 – 5 , Ilobe).

Hypandrium extending anteriorly for almost half its length, mostly within the epandrium, before extending ventrally out beyond margin of epandrium, the hypandrial apodeme continues in this plane.

Etymology. The generic name is derived from the Latin fulgent meaning shining brightly in reference to the bright shining green/blue colour of the thorax, scutellum and abdomen.

Distribution and habitat. Afrotropical, 15 species currently known from South Africa north to Ethiopia and from Nigeria in the west to Kenya in the east. Based on the details recorded on the data labels it would appear that adults are found in habitats such as secondary woodland and lowland evergreen primary forest and at altitudes of up to 1200m.

Relationships. Although adult Fulgenta   are externally very similar to Lamprolonchaea   in body colouration and chaetotaxy the position and detailed taxonomy of the male genitalia indicate that this is a distinct genus within the Earomyiini   . Key features in defining the genus are;

In Fulgenta   the male terminalia are orientated with the posterior margin in a ventral position within the abdomen ( Fig. 2 View FIGURES 2 – 3 ). This is a situation similar to that found in the basal genus Dasiops   rather than in Protearomyia   , Lamprolonchaea   , Earomyia   and genera within the Lonchaeini   where the epandrium has its ventral margin in a ventral position.

The surstyli in Fulgenta   are notably poorly developed ( Fig. 4 View FIGURES 4 – 5 , Sur) when compared to the larger more laminate structures found in Earomyia   and Lamprolonchaea   . This may well represent a derived condition linked to the flattening of the epandrium. In what are considered the basal genera of the family Dasiops   , Chaetolonchaea   and Protearomyia   the surstyli are well developed and usually bear prensisetae.

A further almost unique feature in Fulgenta   is evident in the structure of the epandrium where the 9th and 10th tergites, although fused are evident as separate, well-developed entities, the shapes of the two sclerites and the suture between them being visible ( Fig. 4 View FIGURES 4 – 5 , t9 & t10). Although this development of t9 has been noted in Earomyia viridana (Meigen, 1826)   , it is otherwise almost unknown within the Lonchaeidae   where in almost all species t9 is very narrow ( McAlpine 1962: 36,191).

Within Fulgenta   there is a range of variation in the development of the cerci and surstyli. Species such as F. complexa   have relatively small cerci and relatively well developed setulose surstyli. ( Figs. 14–16 View FIGURES 14 – 18 ) whereas in F. apicalis   the cerci are very large, long and laminate and the surstyli are reduced to simple rods bearing only a few long setulae ( Figs. 6–8 View FIGURES 6 – 9 ). The latter is presumed to be the more derived condition. The surstyli normally play an important part in gripping the female during copulation, with the surstyli being greatly reduced in Fulgenta   it would appear that this gripping function is performed by the large laminate cerci acting against the posterior surface of the epandrium, this would explain why the posterior margin of the epandrium is rounded often with an expanded medial lobe which in some species bears numerous small spicules.

The exact placing of Fulgenta   within the Earomyiini   is not entirely clear at present, the orientation of the male terminalia and the broad t 9 may be regarded as more basal features whilst the reduction of the surstyli and the large cerci may be seen as being more derived. DNA analysis will be required to confirm the relation between Fulgenta   and the other genera in the tribe.

As a result of the findings in this paper the genus Lamprolonchaea, Bezzi   now contains 18 species with the greatest species diversity being found in the Australasian-Oceania region. The genus still contains Afrotropical representatives with one described species L. smaradgi   being widely distributed and at least another two undescribed species being present. 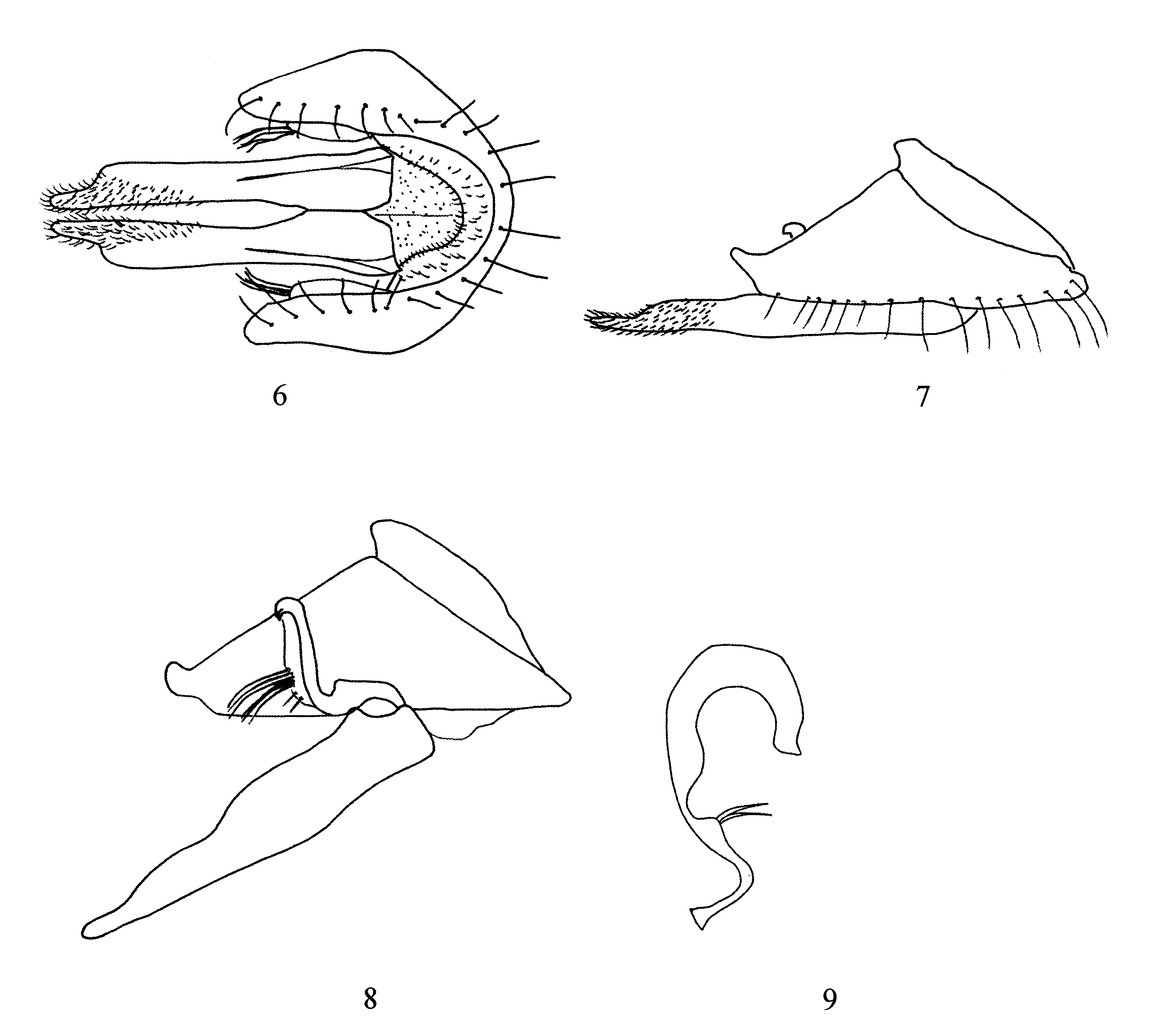