Diagnosis. Trichomycterus pascuali is readily distinguished from its congeners by two remarkable features: possession of five pectoral-fin rays (vs. six or more) and absence of pelvic fin, girdle, and muscles (vs. presence). Within Trichomycterus , only T. candidus (Rio Grande basin, Brazil), T. catamarcensis (Laguna Blanca basin, Argentina), and T. tropeiro (laguna dos Patos basin, Brazil) also lack pelvic structures. Trichomycterus pascuali differs from these three species in having the aforementioned five pectoral-fin rays (v s. six, eight, and seven, respectively) and seven branchiostegal rays (vs. eight, five or six, and nine, respectively). It addition, it differs from T. candidus by the possession of anterior and posterior cranial fontanels completely separated from each other by a broad epiphyseal bar (vs. fontanels partially or completely fused, with epiphyseal bar absent or minute and incomplete) and 37 post-Weberian vertebrae (vs. 38–39 in T. candidus ); from T. catamarcensis by the first pectoral fin prolonged as a small filament (vs. pectoral filament absent in most specimens), 14 ribs (vs. 18–20 in T. catamarcensis ), 17–18 dorsal procurrent caudal-fin rays (vs. 12–13), and 15–16 ventral procurrent caudal-fin rays (vs. 11–12); and from T. tropeiro by the presence of pectoral filament (vs. absence), 17–18 dorsal procurrent caudal-fin rays (vs. 13–14), 15–16 ventral procurrent caudal fin rays (vs. 9–10), and absence of pores i1 and i3 (vs. presence).

Members of the so-called “ Trichomycterus ” hasemani group, a clade of highly derived Amazonian miniature trichomycterids, also exhibit a low count of pectoral-fin rays and one of its species, “T.” anhanga , further lacks pelvic fins. However, the “T.” hasemani group is demonstrably a new subfamily that is more closely related to the Vandelliinae-group than to trichomycterines (de Pinna 1989; Dutra et al. 2012; Datovo 2014, Wosiacki 2002). The nominal assignment of these species to the genus Trichomycterus is merely due to taxonomic inertia, as the formal description of the new subfamily is still underway (by W. Wosiacki and M.C.C. de Pinna, pers. comm.). In any event, T. pascuali differs from all species of the T. hasemani group by the relatively large body size, with up to 49.4 mm SL (vs. miniature body, with less than 18.6 mm SL); presence of an ossified neurocranial roof with two small fontanels (vs. roof of neurocranium mostly unossified and forming a single wide fontanel); and 14 ribs (vs. 1–3).

Etymology. The name “ pascuali ” was given in honor to José Pascual Ochoa, L. Ochoa’s father.

Habitat, ecological notes, and conservation status. The new species was discovered in a small stream with clear water and moderate water flow at the altitude of approximately 600 meters above sea level. The specimens were collected under rocks and aquatic vegetation in a muddy bottom area bordered by riparian vegetation. The region is highly impacted by agricultural activity, more specifically eucalyptus monoculture. Rivers in the region are poor in both alpha diversity and specimen abundance. Trichomycterus pascuali was the only species of fish found in the type locality and the number of individuals sampled was low. This species has a restricted area of occupancy and its vulnerability to the threats from anthropic impacts could drive the taxon to critically endangered in a short time. According to the IUCN (2001) criteria, T. pascuali should be classified in the category vulnerable VU D2.

Genetic identification. Aligned sequences were obtained for 573 bp of COI from the reference set of 11 tissue samples of trichomycterines, the translation of sequences did not result in stop codons, indicating the amplification of functional domains. The nucleotide composition of the COI matrix was 29.8% (T), 26.8% (C), 25.1% (A), 18.3% (G), with a proportion of 400 invariables sites, 173 variables sites and 113 parsimony informative sites. The overall mean genetic distance based in the COI gene was 0.138±0.011. The genetic divergence between species was superior to 3% and the results show concordance with the morphological identification. The pairwise species comparison ranged from 0.5 to 24.1% ( Table 2 View TABLE 2 ) and the divergence genetic within the Trichomycterus species was 0.097±0.009. Trichomycterus pascuali presented a genetic divergence with its congeneric species from 9.3 to 11.7%, with T. candidus and T. brasiliensis respectively. the genetic divergence between E. mutisii and T. pascuali was (10.8%) similar with other species of the Trichomycterus , the maximum likelihood analysis using a concatenated matrix with COI and 16S genes (1122 pb, 30.2%(T), 25.0 (C), 23.7%(A), 21.1%(G), with 112 conserved sites, 254 variables sites and 145 parsimony informative sites) shows that T. pascuali is more related with T. inhering and T. variegatus than other genera included in this analysis with a bootstrap support of 77% ( Fig. 5 View FIGURE 5 ). 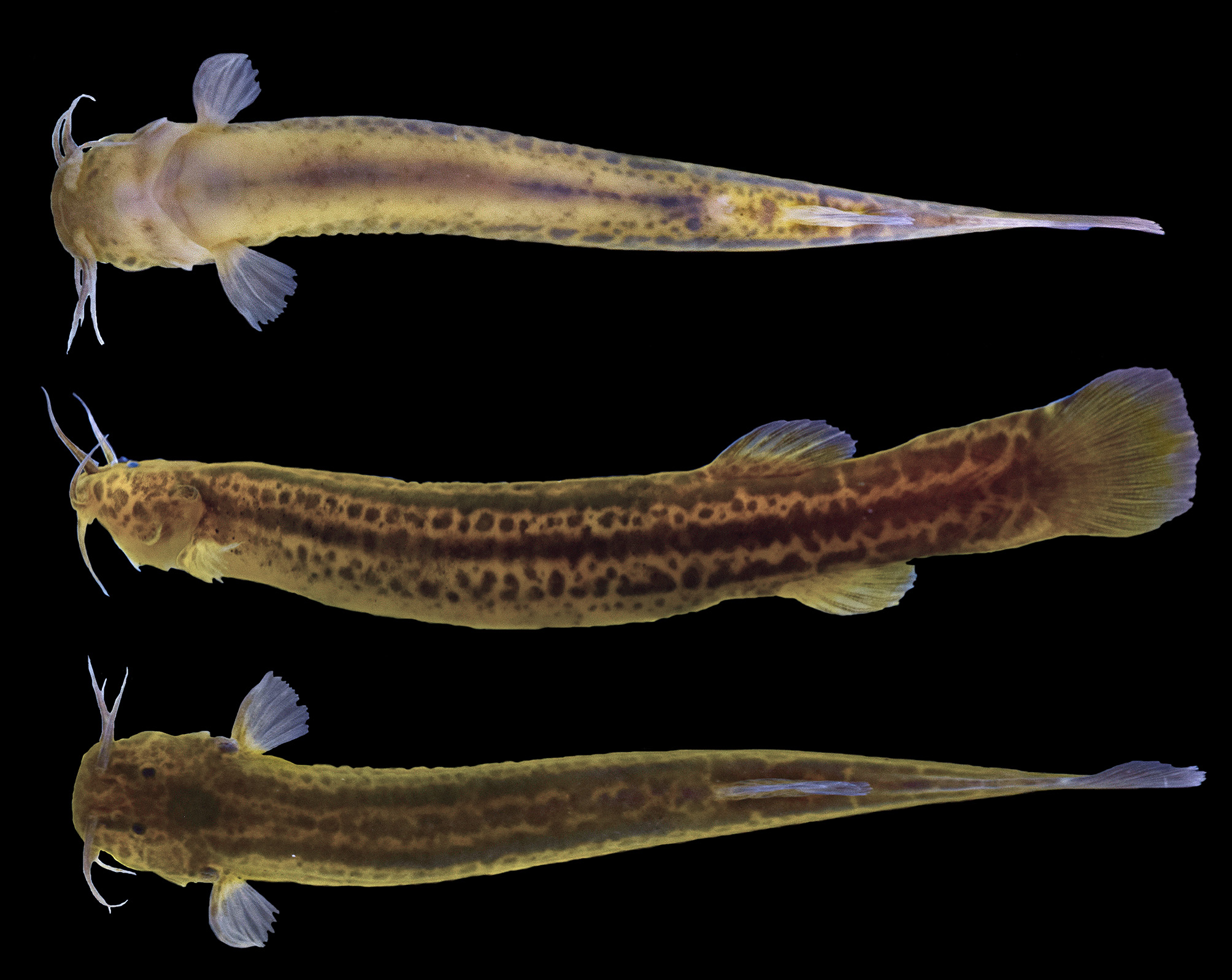 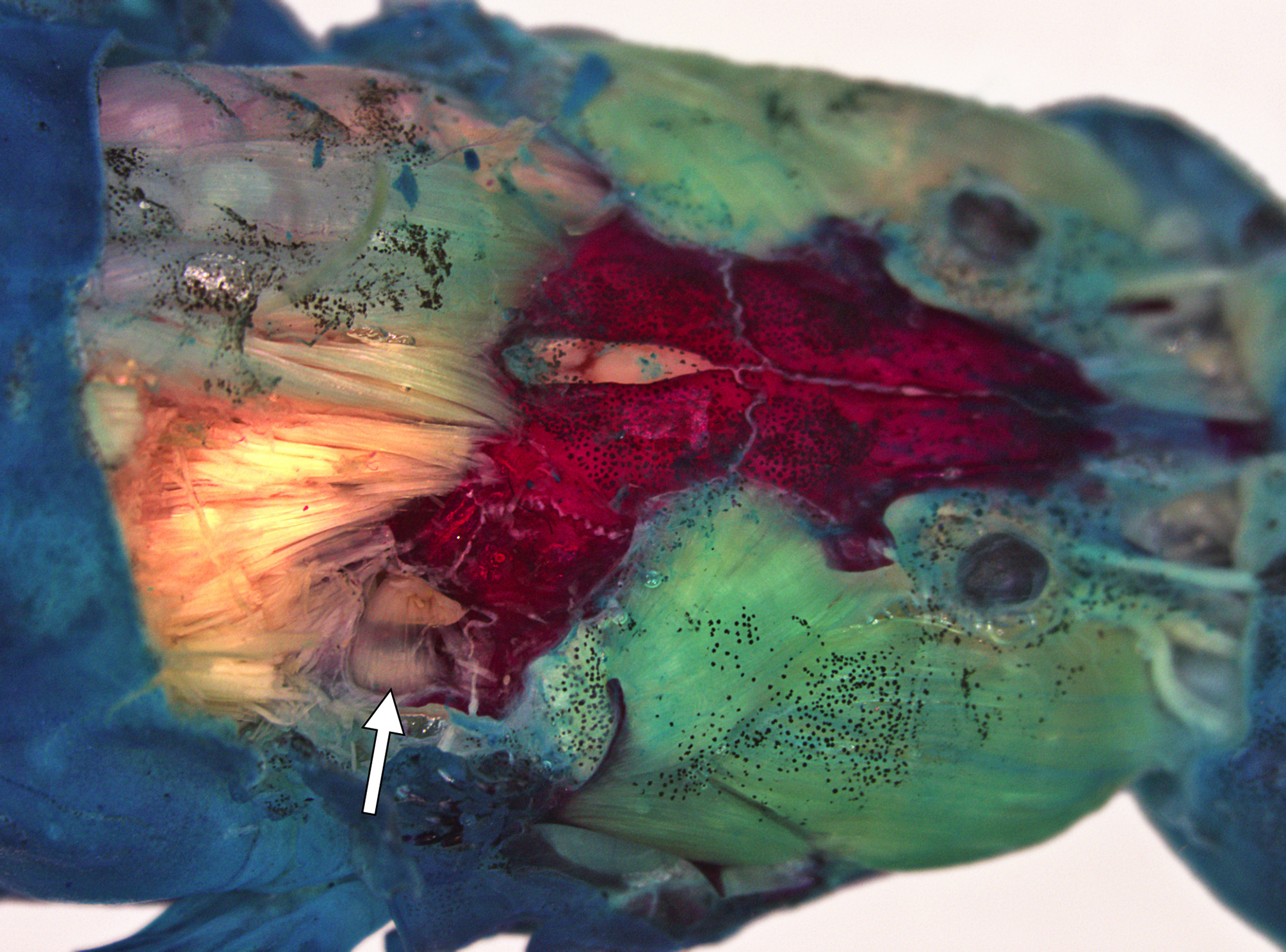 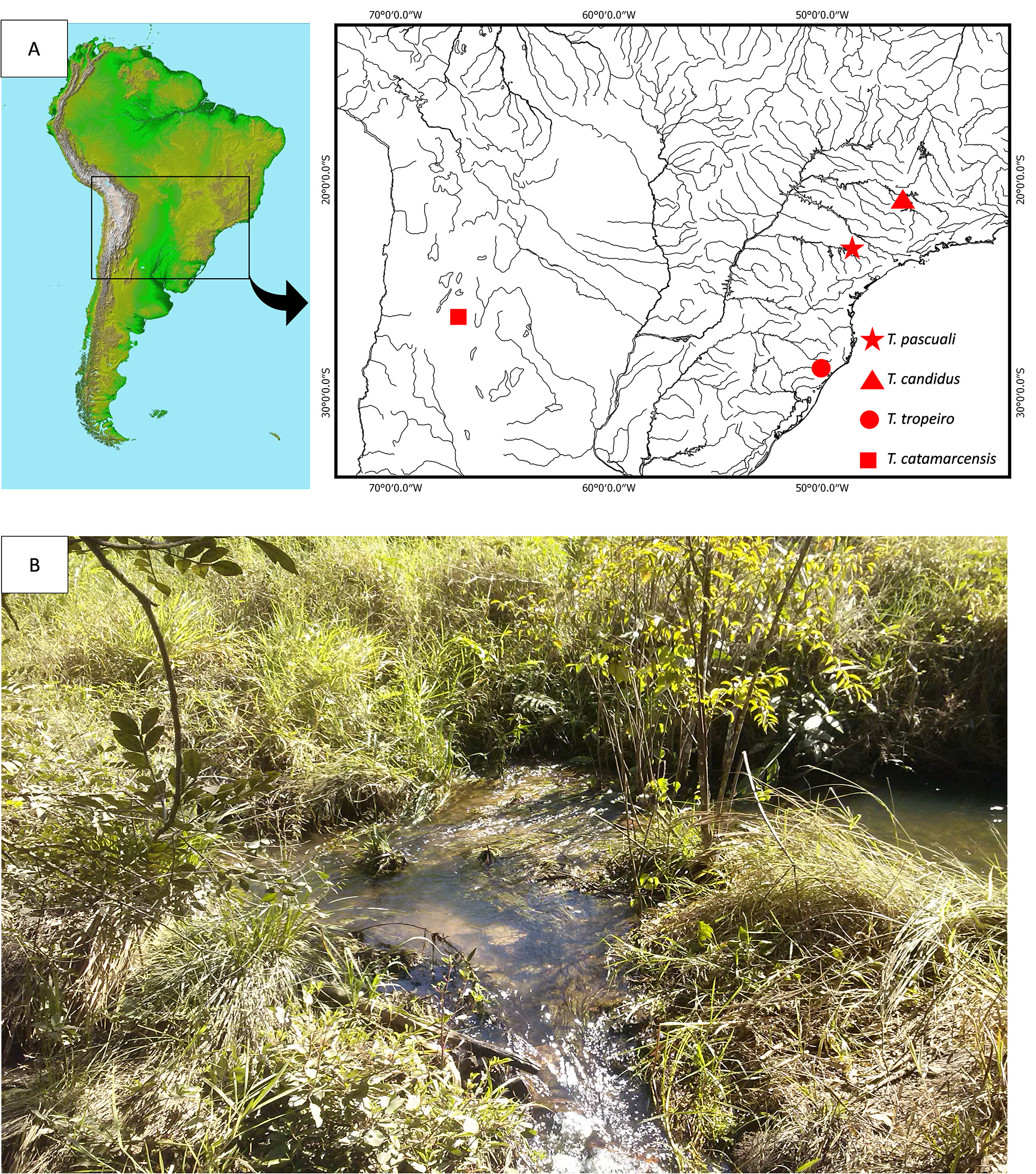 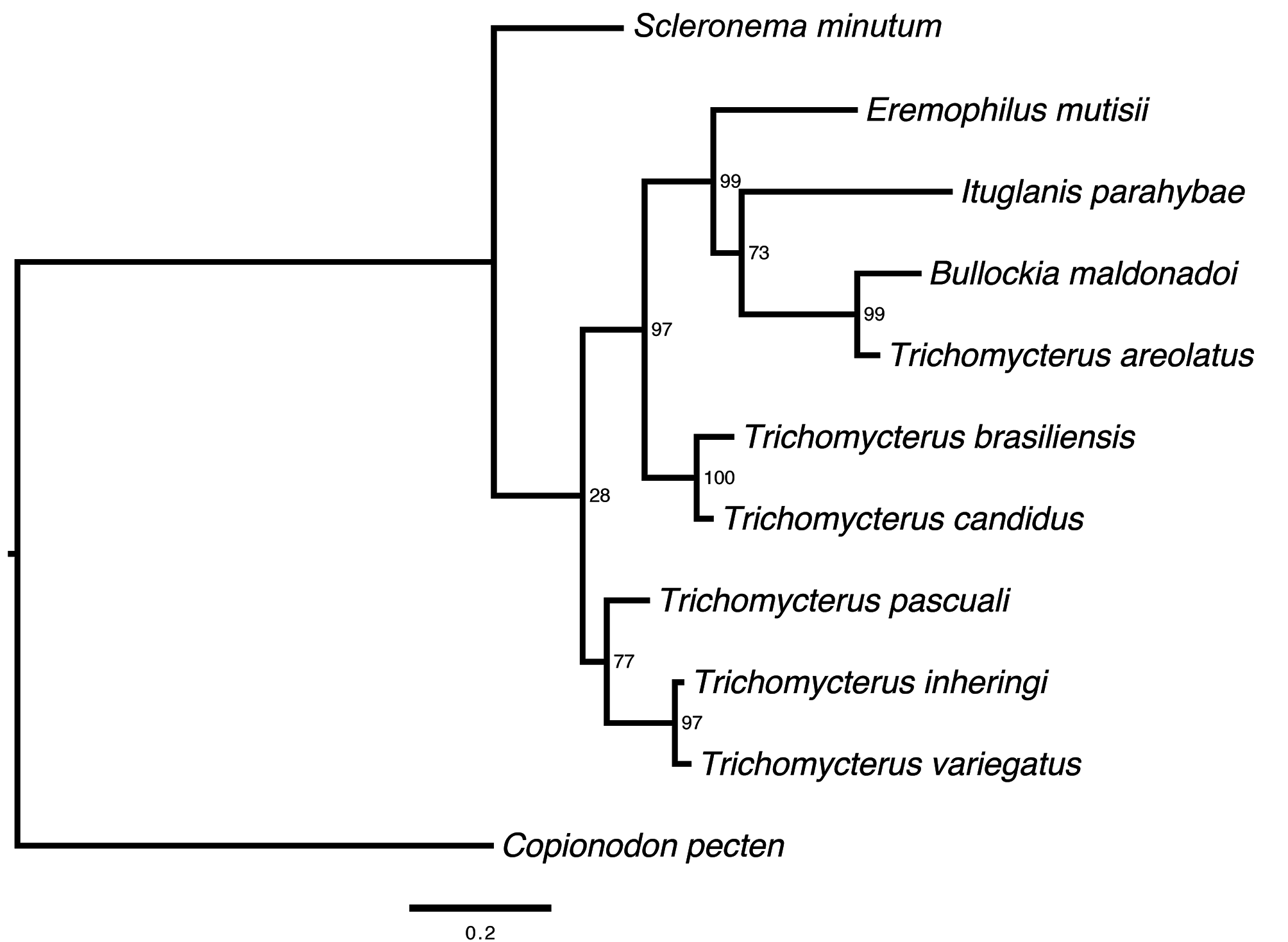