Note. The description is based on both specimens.

Dorsum. Derm fairly uniformly sclerotised, submarginally with quite large areolations, each with minute pale spots; most of rest of derm with abundant, slightly larger pale spots; dorsal mid-line darker but structure obscure; with a series of darker, more or less round areas approximately in three pairs of longitudinal lines, each delineating centre of a polygonal area, with perhaps 11 in each submedial and each submarginal line and 5 in each median line. Marginal radial lines dark, with 10 or 11 on head between anterior stigmatic clefts, a short line from each cleft, each side with 3 between clefts and 10 or 11 on abdomen. Abdominal clear areas absent. Dorsal setae each elongate, slightly curved with a blunt apex, longer than on most other Paralecanium   species, each 30–33 µm long, most frequent in a submarginal band and submedially; absent medially. Dorsal pores of 2 sizes: (i) large pores, each about 3 µm wide in a clear area of derm, forming a rather distinct polygonal pattern throughout, and (ii) microducts, each about 1.5 µm wide in a clear area of derm, perhaps with a small inner ductule; abundant in a distinctly polygonal pattern over entire dorsum. Anal plates together elongate, each with a slightly rounded outer margin and probably with minute setae on posterior margin near apex; also with 2 or 3 some small pores medially; length of plates 165–175 µm, combined width 95–111 µm. With 2 pairs of setae on anterior margin of anogenital fold; lateral margins unclear but perhaps with 1 seta anteriorly and another medially on each margin.

Margin. Margin smooth, without ornamentation. Marginal setae appearing similar to a closed fan, most with faint radial lines and each seta constricted basally by an invaginated basal socket, typical of Paralecanium   species; width of each fan 3–8 µm, length 15–27 µm; with about 75 setae anteriorly between anterior stigmatic clefts, each side with 24–30 setae between stigmatic clefts, and 57–70 setae along abdominal margin. Stigmatic clefts quite deep, each with a sclerotised inner margin and 3 slightly clavate stigmatic spines; median spine much the longest, 55–70 µm long, each lateral spine 26–28 µm long. Anal cleft possibly fused along entire length. Eyespots each more or less round, diameter of lens 15–18 µm.

Name derivation. This species is named after George Compere, who collected a large number of important specimens in Australia. George Compere (1859–1929) worked first in the Riverside Orchard Industry in California but visited Australia in 1899 and was appointed to the Western Australia Department of Agriculture in 1901. He was a biocontrol enthusiast and introduced many biocontrol agents into Western Australia, although this was controversial and Walter Froggatt (1858–1937), another keen entomologist who worked on Australian scale insects in Eastern Australia, did not share this enthusiasm. 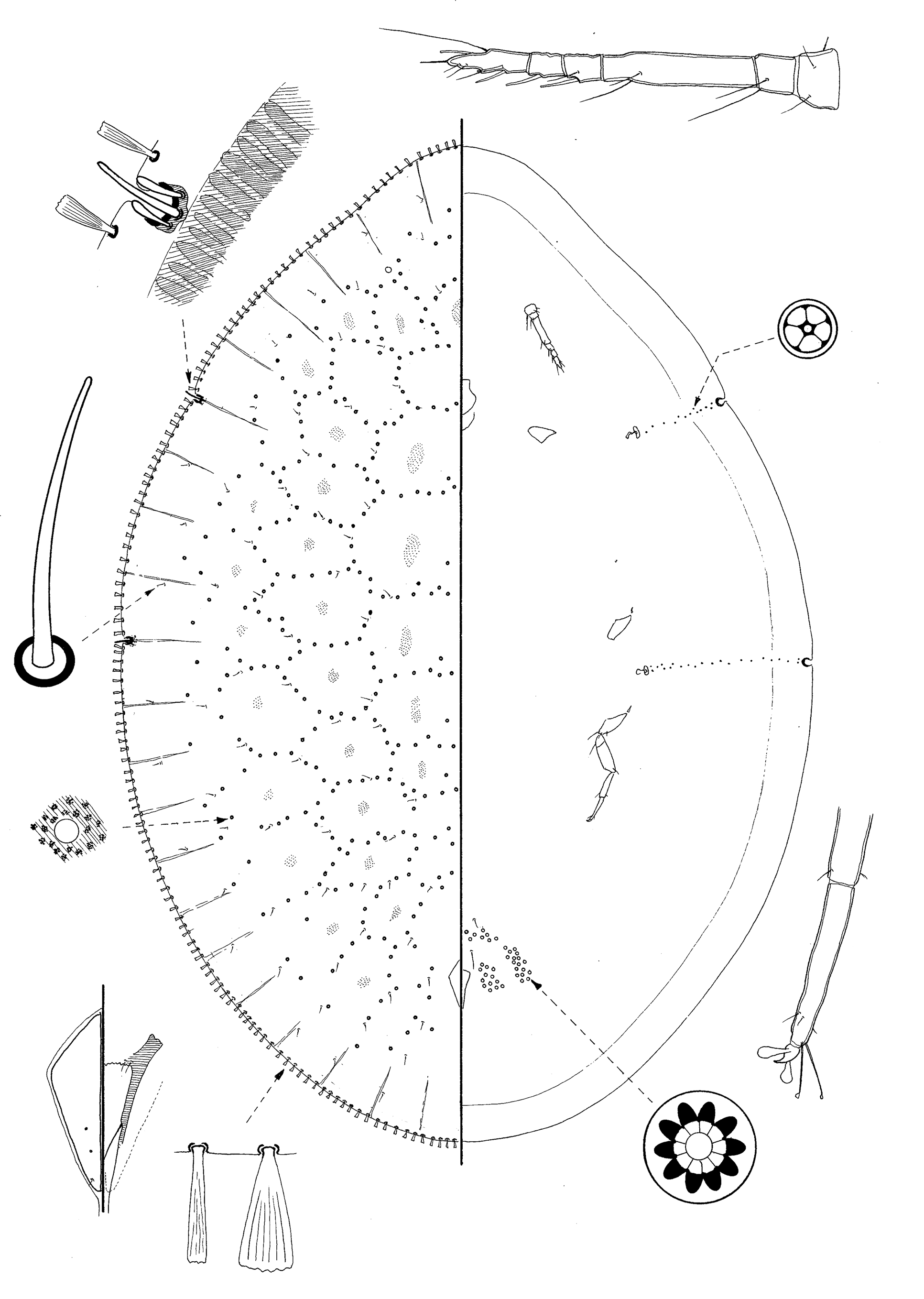