cloudy and dorsum sclerotised. The Canada Balsam is rather thick and the coverslip not on evenly, so only medium-power microscope lenses could be used).

Note. The description is of the only available specimen.

Dorsum. Derm rather uniformly sclerotised without obvious areolations, except just laterad to each anal plate; most of derm with minute pale spots; without a medial longitudinal darker band. Marginal radial lines absent but indicated by position of dorsal setae, with an unknown number anteriorly between anterior stigmatic clefts (probably 11), 1 from each stigmatic cleft, each side with 3 lines between clefts and 11 on abdomen. Abdominal clear areas not apparent. Dorsal setae of 2 sizes: (i) very large, each about 80 µm long, broad basally and narrowing gradually to a sharp point; basal socket about 7 µm wide, situated in a broad area of derm about 11–12 µm wide without minute spots; with 1 pair of setae submedially between posterior stigmatic clefts and another pair submedially posteriorly on abdomen (also, possibly, one close to each eyespot, but broken); and (ii) much smaller setae, each 8–10 µm long and mostly rather club-shaped, apparently restricted to position of marginal radial lines, with only 1 in each line, almost all within area of broad ventral marginal band; apparently absent medially. Large dorsal pores present, each 6.0–8.0 µm wide and appearing as a sclerotised ring surrounded by minute clear spots; very sparse submedially, perhaps with only about 10 on each side [note that most large dorsal setae are broken on the available specimen but their basal sockets look very like large dorsal pores; it is here considered that they can be separated by the absence of small spots around basal disc of each seta]; small simple pores, each about 2 µm wide, sparsely present in an apparently polygonal pattern. Anal plates rather small, together approximately quadrate, with anterior and posterior margins subequal in length; number of setae and pores unknown; length of plates about 100 µm, combined width about 87 µm. Anogenital fold with 1 small seta on each side of anterior margin but other setae unclear.

Margin. Marginal ornamentation present as distinct, quite strong sclerotised corrugations, with usually 6–9 sclerotisations between marginal setae. Marginal setae oval and fan-like; width of each fan 35–37 µm, length 28– 30 µm; with 52 setae anteriorly between anterior stigmatic clefts, each side with 14 or 15 between stigmatic clefts, and 42–45 along abdominal margin. Stigmatic clefts narrow and quite deep, each without a sclerotised inner margin but with a single stigmatic spine, each spine parallel-sided and blunt apically, spines mostly long enough to extend out of cleft, each 25–30 µm long. Eyespots oval; each socket about 45 µm at its widest, diameter of lens about 16 µm.

Venter. With a broad darker band marginally, 160–230 µm wide. Multilocular disc-pores present in groups on either side of genital opening and on preceding segment, each side with possibly 11 or 12 on abdominal segment VII and 10 on segment VI but very unclear. Spiracular disc-pores present in a narrow band between margin and each spiracle, with possibly 12–14 in each band. Ventral microducts not detected. Antennae well developed, each with 6 segments; total length 248–255 µm; apical segment about 50 µm long; apical seta about 25 µm long. Clypeolabral shield small, about 85 µm long. Spiracles small, width of each peritreme 15–18 µm. Legs well developed, mostly without either trochanterofemoral or tibio-tarsal articulations, although this hard to discern; dimensions of hind leg (µm): coxa 75–81, trochanter + femur 108–120, tibia + tarsus 118–122; claw 11. Tarsal digitules slightly longer than claw digitules, with capitate apices; claw digitules both broad; claw probably without a denticle.

Comments. The adult female of P. pahanense   is rather similar to those of P. busoense   , described as new above, both species sharing (i) two sizes of dorsal setae, with the larger setae spinose and located submedially and (ii) only one stigmatic spine in each cleft. For a discussion of differences, see under P. busoense   . The presence of the large dorsal setae immediately separates these two species from all other Paralecanium   species. Long setae medially on dorsum are also present on Discochiton vacuum   . Note that these larger setae can be easily lost and then the basal sockets look very like large dorsal pores. 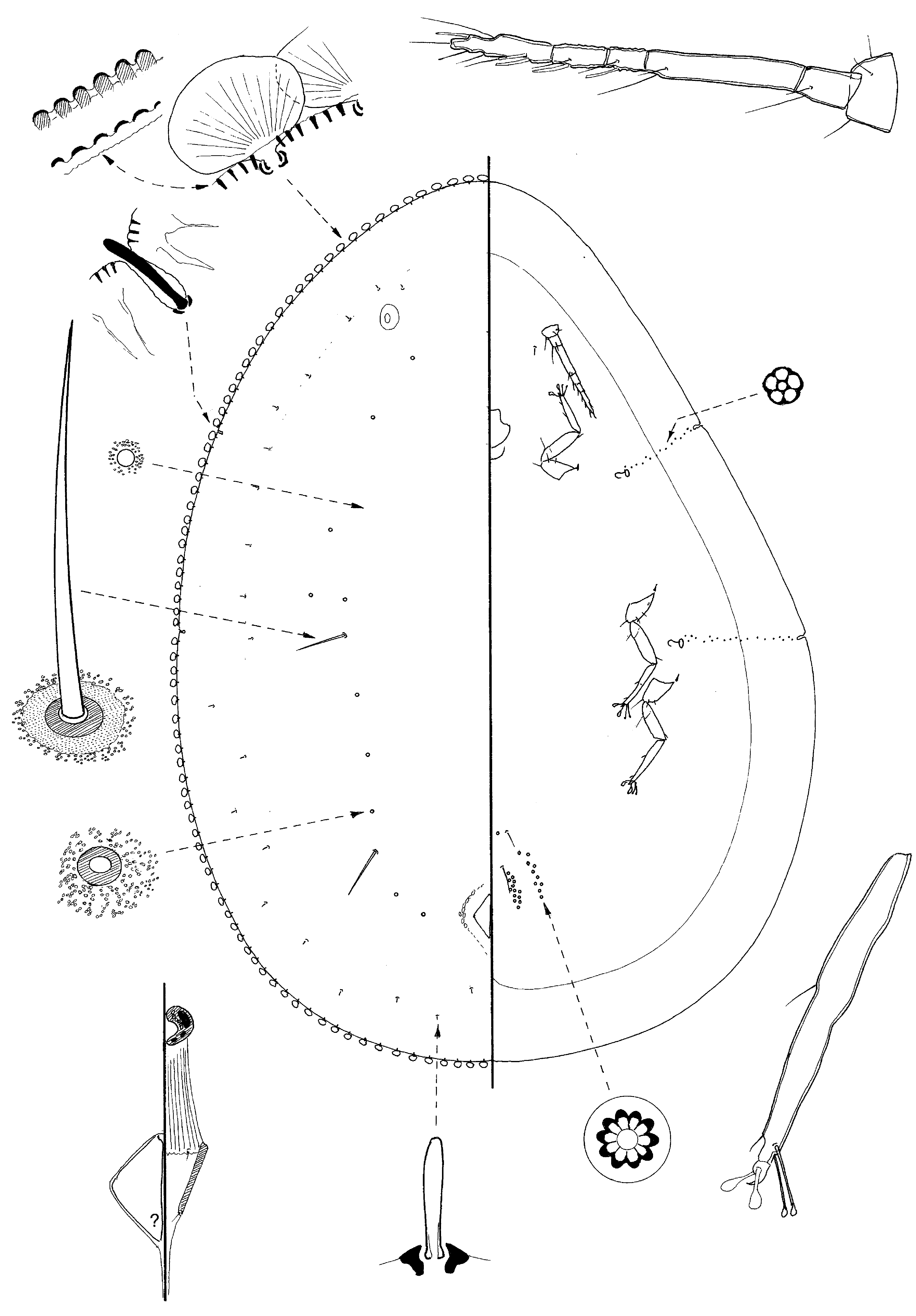