Comments on locality data. The Holgat River Mouth (28 ° 58 ∞ S, 16 ° 43 ∞ E) record extends the known distribution of S. (P.) striatus   about 30 km northwards. The high security mining area between Kleinsee and Port Nolloth accounts for the lack of records here. This area was surveyed early in the season of 1996, but only dead specimens of S. (P.) striatus   were found on Oubeep 173 at 29 ° 21 ∞ 55S, 16 ° 57 ∞ 32E. Garies and Anenous Pass fall outside the expected coastal distribution of S. (P.) striatus   ( figure 6 View FIGS ). These specimens were probably collected closer towards the coast, but the closest inland locality known was used to record their location.

Biology. Refer to Scholtz (1989) for a detailed study on the foraging and burrow construction of this species. Of 28 burrows excavated by JduGH, 26 contained only dry dung pellets while two contained both detritus and pellets. This suggests that S. (P.) striatus   is predominately a dry pellet feeder rather than a detritus feeder. Scholtz (1989) found that the natural forage of the Port Nolloth population of S. (P.) striatus   was rodent pellets. However, the vast majority of the pellets excavated by JduGH were sheep, but even small fragments of dry ostrich dung were collected. Thus it appears that S. (P.) striatus   will collect any suitable dry dung that it can relocate.

S. (P.) striatus   were successfully bred under laboratory conditions on two separate occasions. Four pairs (1 September 1996 to 23 January 1997) and six pairs (9 September 1998 to 4 December 1998) of S. (P.) striatus   collected from Strand Fontein (30 ° 33 ∞ S, 17 ° 26 ∞ E), were placed in round 25 litre buckets and 5 litre square bread bins, respectively. Sand, dry sheep pellets and detritus from their collection site (Strand Fontein Farm in Namaqualand) were provided. They dug burrows, foraged regularly and bred successfully. The 1996 sample produced two third-instar larvae (prepupa), one pupa and one teneral adult. Two third-instar larvae (prepupa) and one pupa were bred in 1998. No evidence of the use of a brood pear to contain the larvae was found in S. ( Pachysoma   ). Which is additionally confirmed by the larval morphology because the characteristic hump defining all dung ball-confined larvae is absent in S. (Pachysoma) striatus   and S. (Pachysoma) gariepinus   larvae. When excavated the larvae were in clean moist sand a few centimetres from the closest nest evidence (i.e. larval or adult frass and/or a decomposed dung plug). The pupae were surrounded by a fragile casing constructed from sand grains cemented together. This suggests that S. ( Pachysoma   ) larvae are open nest feeders that move away from their nests as prepupae, before pupating in clean sand. The nature of the larval food itself needs to be verified, as no larvae were found in a nest. However, the possibilities include the rehydrated dung pellets or detritus provisioned by the adults, or they might feed on the adult faeces (i.e. already processed dung and detritus).

Klemperer and Lumaret (1985) studied the nesting biology of Geotrupes (Thorectes) sericeus   ( Geotrupidae   ) a flightless species restricted to sandy coastal dunes in western France. Their study provides valuable insight into the biology of flightless species nesting in sand and feeding on dry dung. Female T. sericeus   lay an egg at the terminal end of a chamber before provisioning it with a plug of unhomogenized dry rabbit pellets. The egg chamber is thus outside the dung mass and the larvae are free-living. Related species T. albarracinus   and T. laevigatus   , which nest in soil, have their egg chamber contained within the homogeneous brood mass of sheep dung ( Klemperer and Lumaret, 1985). It is worth determining whether S. ( Pachysoma   ) females also lay their eggs at the terminal ends of the food chamber, away from the food itself. This is very likely as Klemperer and Lumaret (1985) suggest that ‘...ovipositing outside the brood mass may have a selective advantage where nests are made during the wet season in sandy environments. Water is more likely to drain away from a chamber in sand, but an egg inside a dung mass is more likely to ‘‘drown’’. This is because the dung mass will retain water by capillary suction...’ ( Scholtz, 1989, shows this capillary action with dry pellets used by S. (P.) striatus   ). Other Geotrupidae   that nest in sand, viz. Typhaeus typhoeus   and Ceratophyus hoffmannseggi   , always oviposit outside the brood chamber ( Klemperer and Lumaret, 1985). T. sericeus   pupate inside the original brood chamber but Typhaeus typhoeus   , that prefer sandy soils ( Brussaard and Visser, 1987), pupate in the surrounding sand ( Main, 1917), as observed in S. ( Pachysoma   ).

Types. Castelnau’s (1840) description of Pachysoma striatum   suggests a single female specimen was examined (length 9 lig width 6 lig). The line (lin. or lig.) equals one-twelfth of an inch ( Torre-Bueno, 1989). Thus, this specimen measured about 19.08 mm long and 12.72 mm wide. The type locality was recorded as ‘Cap de Bonne-Espérance’ and the specimen was deposited in the collection of M. Gory.

Péringuey’s (1888) description of Pachysoma marginatum   includes references to both sexes, lists a range in body size (length 20–25 mm, width 14–16 mm) and mentions that P. marginatum   is ‘pretty common at Port Nolloth, Namaqualand’. These observations suggest that several specimens were examined. He deposited the types in the SAMC collection and in his personal collection. According to Cochrane (1995), Dr Hesse removed all suspected types from Péringuey’s private collection, labelled them with green (holotype) and orange (paratypes) labels and deposited them in the SAMC collection. The only possible type material listed by Ferreira (1953a) are three males from Port Nolloth collected by Warden, dated between 1885 and 1899. Only one undated specimen from this series was examined from the UPSA collection. Holm and Scholtz (1979) were unable to find any labelled type material and rightfully designated the earliest collected specimen from Port Nolloth as the male lectotype. Subsequently, however, two specimens from the type locality both determined in Péringuey’s hand, one older than the designated lectotype and the other not dated, were discovered in the SAMC and DMSA collections, respectively. These specimens are designated here as paralectotypes. A single pinned aedeagus labelled in Péringuey’s hand as follows: ‘ Pachysoma marginatum   , armature of 3 ’, was also discovered in the SAMC (refer to discussion on S. (P.) denticollis   types). This aedeagus probably originates from the holotype of P. marginatum   , which appears to be lost. Because a lectotype has already been designated by Holm and Scholtz (1979) this aedeagus is designated as paralectotype of P. marginatum   . 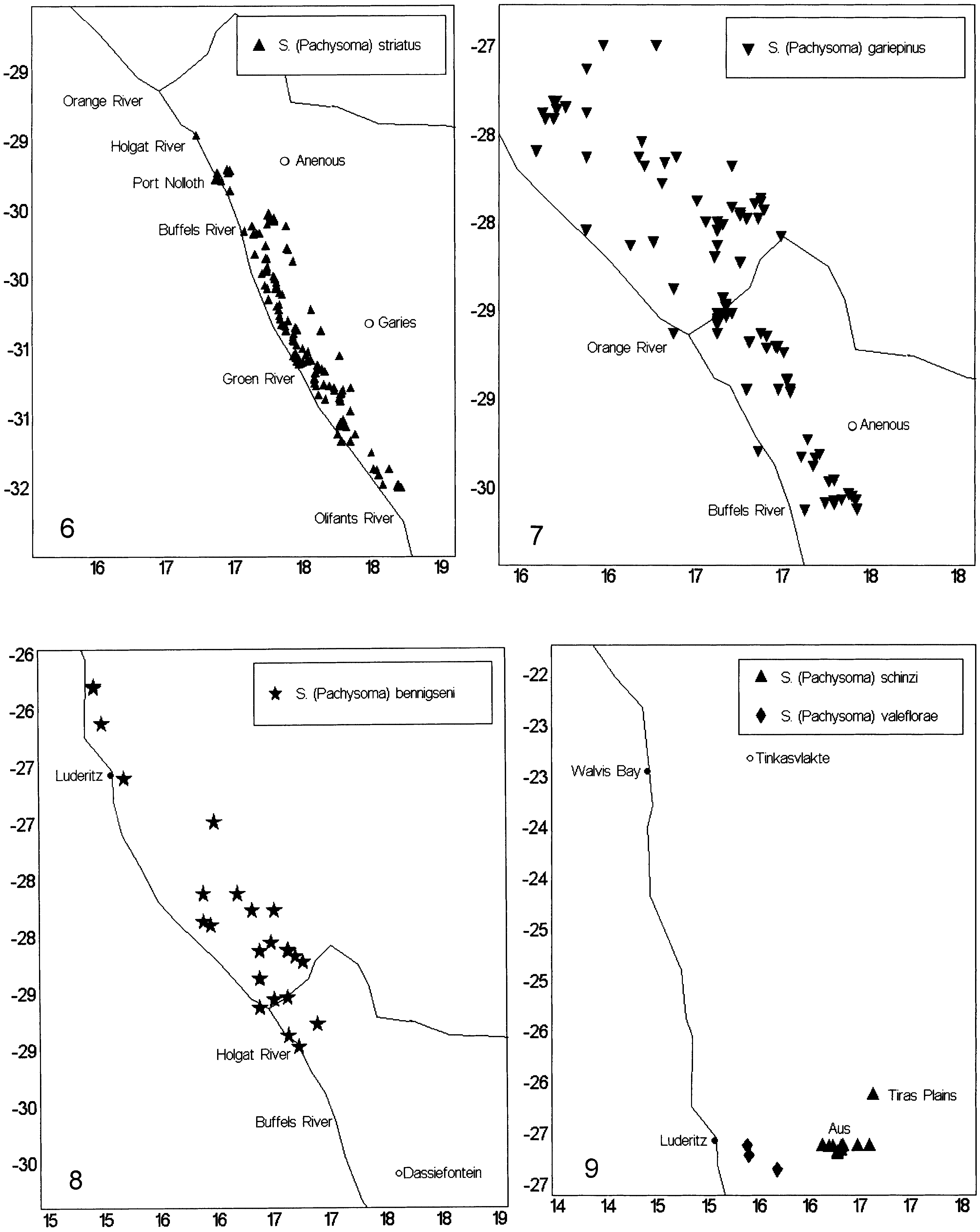 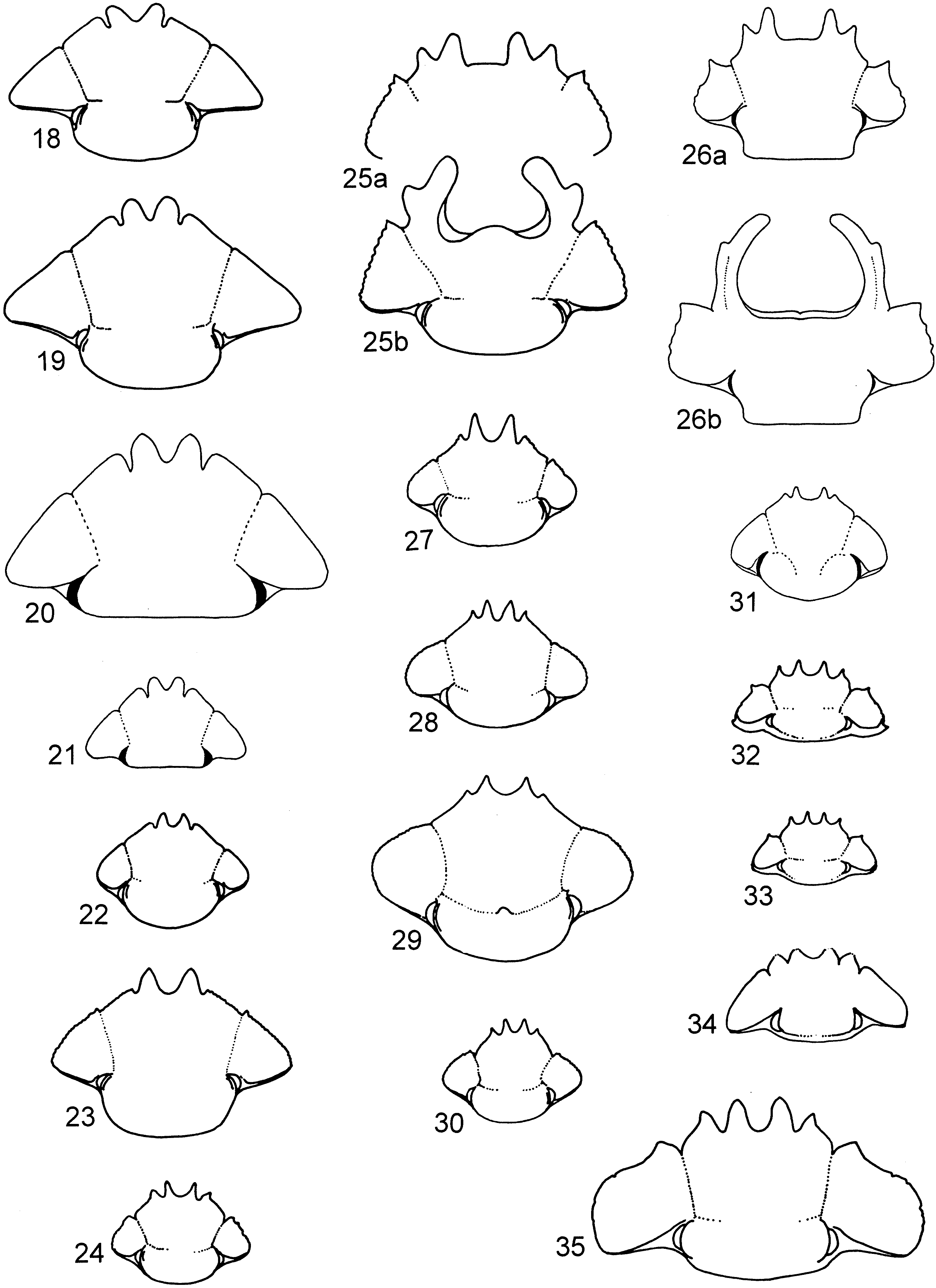