Remarks. The new species is referred to genus Bragasellus Henry & Magniez, 1968   for the shape of the endopod of pleopod 2 in males, in which the distal article lacks any kind of process. The equivalent sexual structure bears an elongated basal process supported by a sclerotized rod in the genus Asellus Geoffroy, 1762   , which is absent in the species of Bragasellus   ; although a number of species in the former genus bear one or two basal processes they are proportionally shorter and are never supported by a rod ( Henry & Magniez 1974). The numerous species of Proasellus Dudich, 1925   possess a subapical tergal process in the appendix masculina, a trait totally absent in Bragasellus   species ( Henry & Magniez 1974), except for B. afonsae Henry & Magniez, 1988   . The rest of genera reported from Western Europe encompass only hipogean species thus far. Gallasellus Henry & Magniez, 1977   , a monotypic genus from Southern France, and Chthonasellus Argano & Messana, 1991   , a genus endemic from central Italy and also monotypic, present a cannula protruding from a terminal depression partially covered by a curved caudal process ( Henry & Magniez 1977; Argano & Messana 1991), which is very different to the appendix masculina of the rest of west European genera. Finally, the Iberian endemic genus Synasellus   Braga, 1944 is characterized by the lack of mandibular palp, whereas this structure is well developed in all Bragasellus   species, and its appendix masculina bears a markedly tapering cannula ( Henry & Magniez 1995), very different to that of B. oscari   , in which it appears as a cylindrical tube.

To date, genus Bragasellus   contained 20 valid species, all of them endemic of the Iberian Peninsula ( Braga 1943, 1944, 1946, 1958, 1964; Henry & Magniez 1973, 1976, 1978, 1980, 1988; Afonso 1984, 1989; Afonso et al. 1996; Magniez & Bréhier 2004). Most of them are cave-dwelling, unpigmented taxa and only two are epigean and were described as having conspicuous body pigmentation: B. peltatus   ( Braga, 1944) and B. cortesi Afonso, 1989   . The new species is also epigean, but differs from them by the proportionately shorter pereopod I dactylus, which is shorter than the palm of propodus, by the pleopod I exopod marginal setae, which are smooth instead of plumose, and by the shape of the pleopod III exopod, which has a straight internal side instead of more or less rounded one ( Braga 1944; Afonso 1989). Bragasellus oscari   sp. nov. and B. cortesi   have very similar male pleopod II, with exopod shorter than endopod, and with the latter lacking basal process and bearing a developed cannula, contrary to B. peltatus   , which posseses a basal process and lacks a cannula in its appendix masculina. However, the male pleopod II of B. oscari   sp. nov. and B. cortesi   differ in the setal arrangement of the exopod, which shows a clear gap between marginal and distal setae in the former species.

Some publications recorded abundant populations of the epigean asellids Proasellus coxalis (Dolfuss, 1982)   , P. meridianus (Racovitza, 1919)   and P. ibericus   ( Braga, 1946) near the type locality of the new species ( González & Cobo 2006; Cobo 2017). Apart of a distinct colour pattern with yellowish speckles over their head and body, these three species possess conspicuous subapical process in their appendix masculina, which are clearly shorter than corresponding exopodites ( Braga 1946; Henry & Magniez 1992), so they may be easily separated from B. oscari   n. sp.

Etymology. The new species is named after Óscar, youngest child of first author. 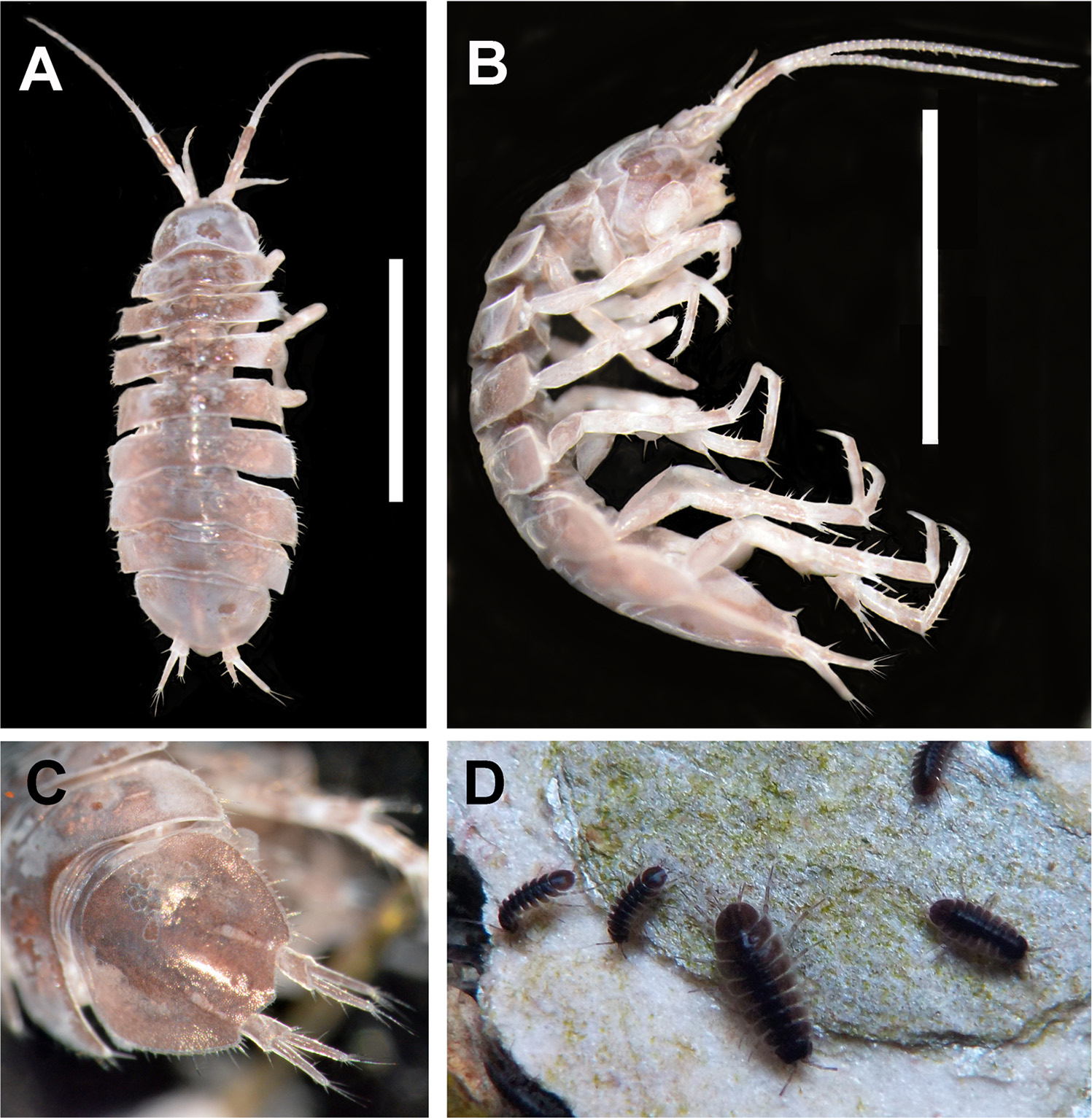 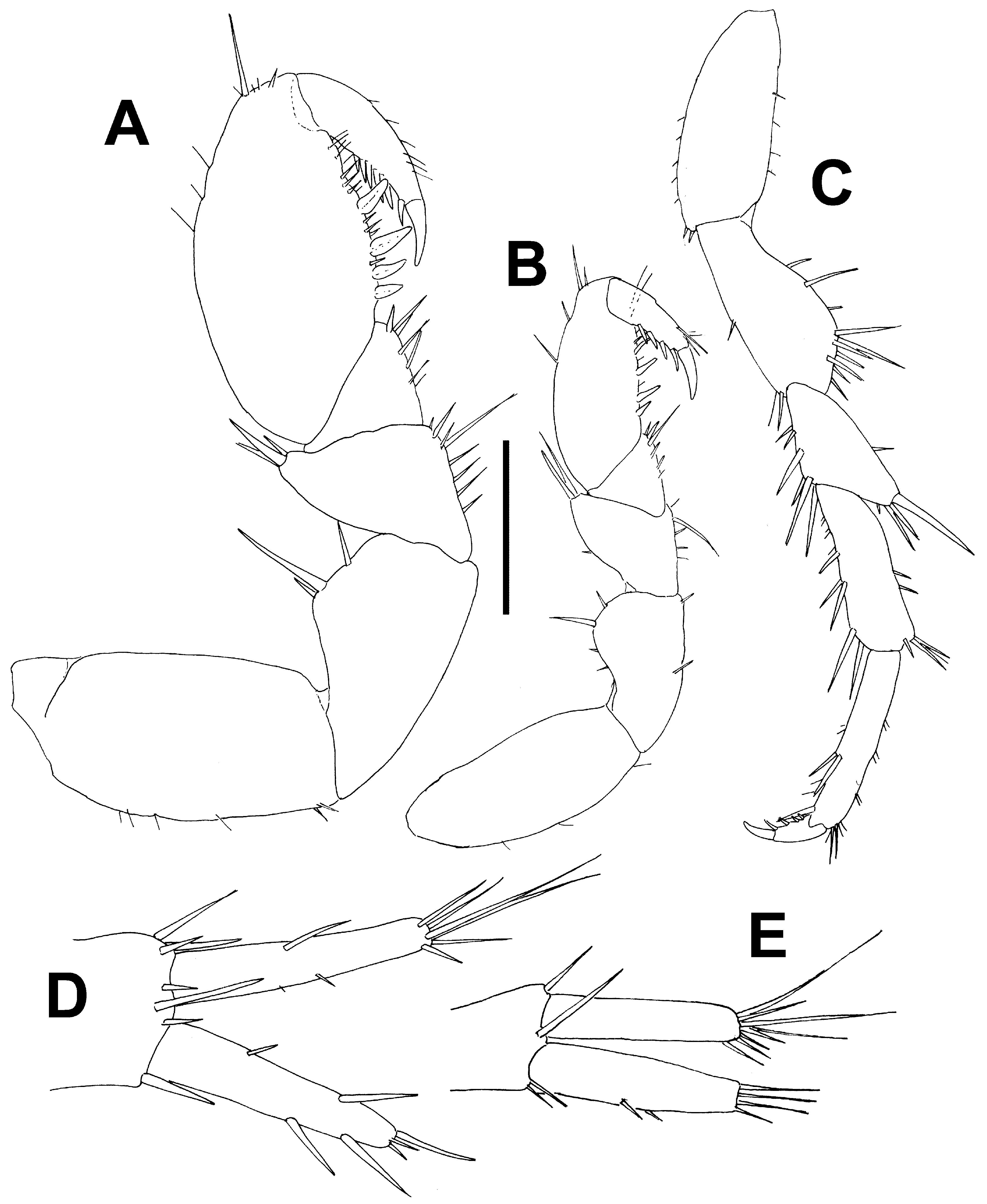 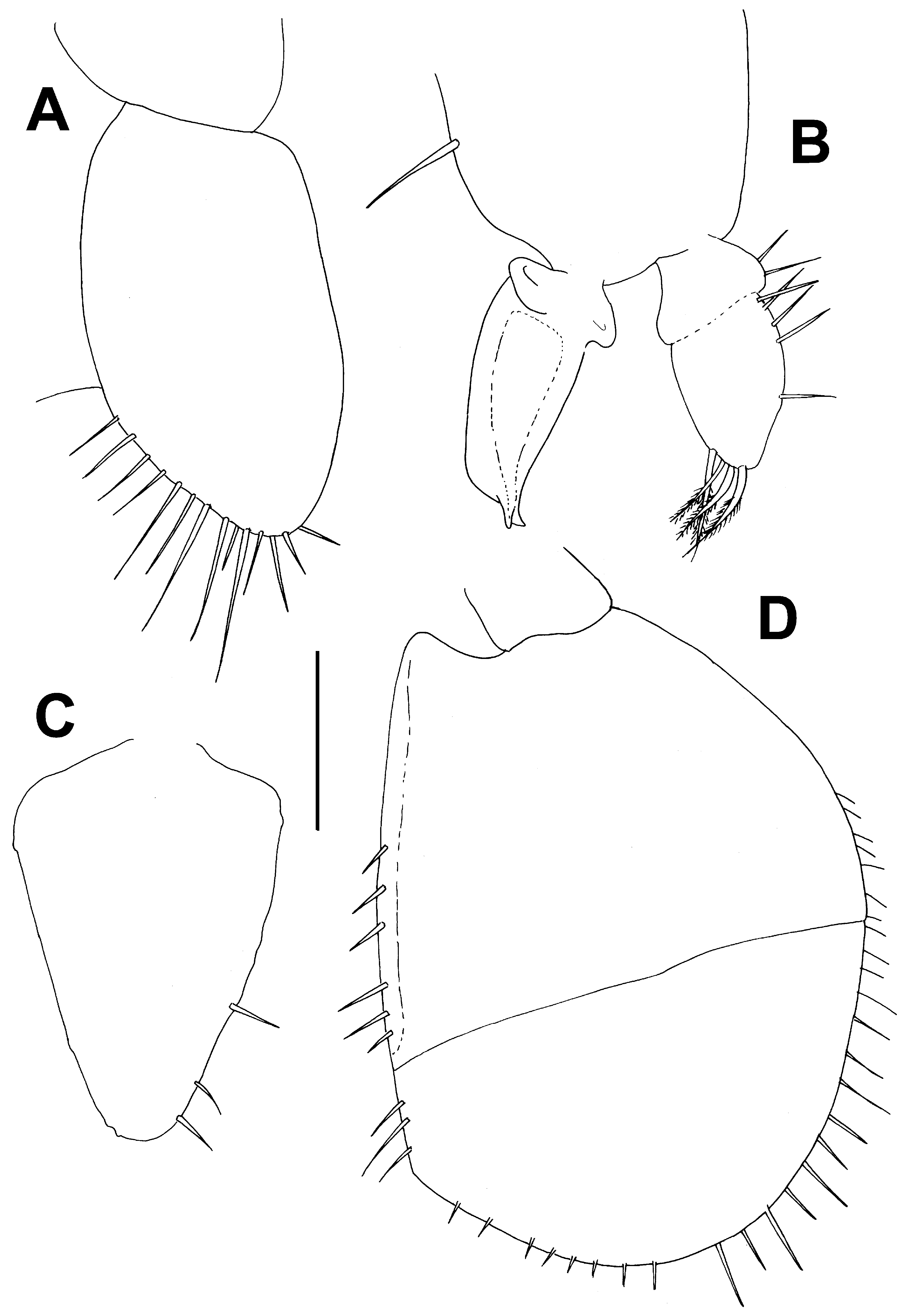