Types. Male and female, reared by Louis Péringuey from an unspecified gall on Ehrharta villosa plants collected near Cape Town, South Africa in or before 1914. The types are presumably lost ( Gagné & Jaschhof 2017). We are note designating a neotype as the species is easily recognizable and there is no doubt about its identity.

Description. In addition to the generic characteristics, the species can be diagnosed by the following.

Remarks. Cecidomyiidae are rather small insects and the wing length of most of them is 1.5–3.5 mm. With a wing length of up to 6.2 mm, M. graminis is one of the largest species of the family. Interestingly, we know of another sizeable South African gall midge-an undescribed species causing bud galls on Combretum spp. that has a wing length of 8.6 mm (Stefan Neser pers. comm.).

Biology. Mitodiplosis graminis induces a stem gall on Ehrharta villosa ( Fig. 1 View FIGURE 1 ). The leaf blades on an infested stem become shortened, the stem internodes do not lengthen, and the leaf sheaths are thickened and widened, creating a witch’s broom-like structure ( Figs 1a, c View FIGURE 1 ). The superficial tissue layers of the gall (i.e. malformed leaf sheaths and blades) become grey and senescent while the internal tissue (i.e. malformed stem) stays soft and green ( Fig. 1c View FIGURE 1 ). There are 2– 20 larvae, and later pupae, inside separate larval chambers within the malformed stem tissue ( Fig. 1b View FIGURE 1 ). Galls with more larvae are longer than those with fewer larvae. The malformed stem eventually grows out so that it protrudes from the leaf sheaths ( Fig. 1c View FIGURE 1 ) enabling an unhindered emergence of the gall midge from the stem’s surface ( Fig. 1d View FIGURE 1 ). Ehrharta villosa produces long underground stolons with numerous stems per plant. At Sedgefield (Western Cape, South Africa) in 2018, only few stems per ground area were infested by M. graminis , with about 50–100% galls being parasitised by a platygastrid and possibly also by other parasitic wasps. Interestingly, a few empty larval chambers of M. graminis were found to be occupied by Anguina woodi , a large, host specific, gall forming nematode. The nematode is an autonomous gall producer ( Swart et al. 2004) and it seems unlikely that it is involved in a mutualistic relationship with the gall midge, as is found between the nematodes of the genus Fergusobia (Sphaerularioidea: Tylenchida : Neotylenchidae ) and the gall flies of the genus Fergusonina ( Diptera : Fergusoninidae ) in Australasia (e.g. Taylor & Davies 2010).

Geographical distribution. Ehrharta villosa occurs on sand dunes or sandy soils in the proximity of the sea in the Western Cape and the Eastern Cape provinces of South Africa. The area between the seven localities at which M. graminis has been found thus far covers most of the plant’s distribution in the Western Cape province. Louis A. Peringuey discovered the galls from which he reared the type male and female (now presumably lost) near Cape Town in or before 1914. Alan R. Wood found galls and larvae and reared pupae, males and females from plants collected near Sedgefield (34. 026°S, 22.772°E), Western Cape Province, on 22-vi-2018 ( Figs 1 View FIGURE 1 b–d), and galls at Agulhas National Park (34.814°S, 19.941°E) on 3-ii-2014 (emergence completed before this day), Blouberg   GoogleMaps beach Cape Town (33.751°S, 18.442°E) on 18-vii-2018 and Milnerton Beach   GoogleMaps , Cape Town (33.845°S, 18.488°E) in x- 2002. Jan-Hendrik Keet found galls at Koude Vlakte Nature Conservancy (34. 478°S, 19.457°E), south of Stanford   GoogleMaps , Western Cape Province, 150 km south east of Cape Town, on 7-ii-2016 ( Fig. 1a View FIGURE 1 ). Netta Dorchin found galls that contained pupae at West Coast National Park   GoogleMaps (33.121°S, 18.067°E), Western Cape Province, 120 km north of Cape Town, on 26-ix-2018. It is to be ascertained if the gall midge occurs also in the remaining part of E. villosa natural distribution range, namely in the Eastern Cape province. 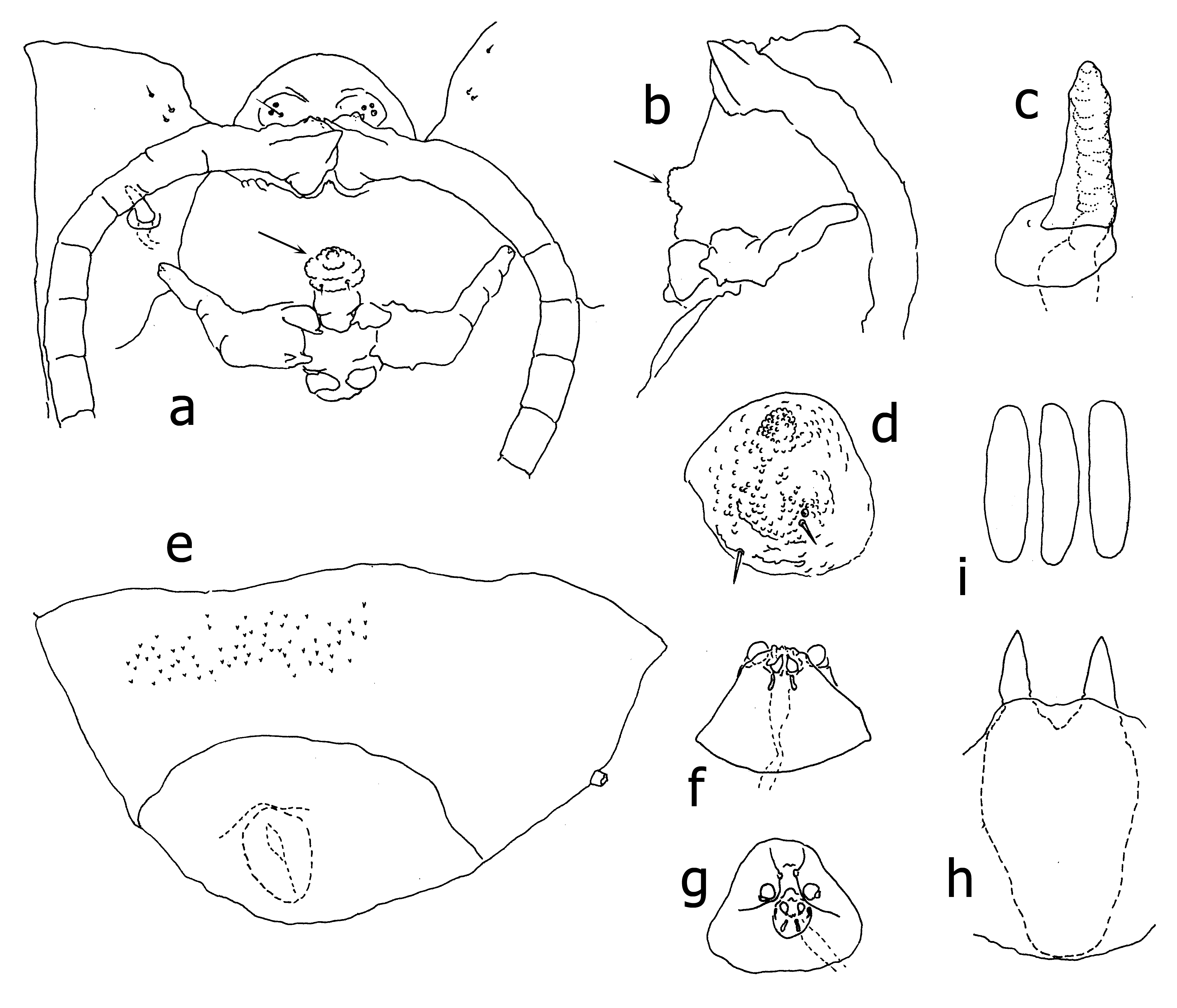