Enghoff, Henrik, 2018, A mountain of millipedes VII: The genus Eviulisoma Silvestri, 1910, in the Udzungwa Mountains, Tanzania, and related species from other Eastern Arc Mountains. With notes on Eoseviulisoma Brolemann, 1920, and Suohelisoma Hoffman, 1963 (Diplopoda, Polydesmida, Paradoxosomatidae), European Journal of Taxonomy 445, pp. 1-90 : 7-17

Mauriès (1985) described a subgenus of Eviulisoma , based on a species from Morocco. However, a study by Enghoff & Reboleira (in prep.) shows that Jeekelosoma Mauriès, 1985 , should be upgraded to full generic status, and by this action Eviulisoma will again become an endemic Afrotropical genus.

A succinct diagnosis of Eviulisoma was provided by Hoffman (1953). Supplemented with information from Hoffman (1964, 1971), Jeekel (2003), Vandenspiegel & Golovatch (2014) and the present study, and with an updated terminology (see below), Eviulisoma may be diagnosed as follows:

A genus of Paradoxosomatidae in which:

- paranota are missing, or at most present as tiny keels on ring 2 only

- the sternum of body ring 6 is usually deeply excavated

- the acropodite consists of at least three branches which seem to originate directly from the prefemur:

- a lateral solenophore which serves as protection of the solenomere

Jeekel (2003) gave detailed redescriptions of many species of Eviulisoma , as well as general comments on the gonopods. In Jeekel’s terminology, the gonopod in Eviulisoma consists of a basal coxa, followed by a prefemur and a terminal acropodite. The ʻfemoriteʼ which usually forms a distinct basal ʻshaftʼ of the acropodite is extremely reduced in Eviulisoma , and “Moreover, it has made a torsion of 180° which is shown by the course of the spermal channel along the anterior side towards the lateral side. The result is that the solenomere arises from the lateral side of the femorite” ( Jeekel 2003: 48).

On the acropodite Jeekel (2003) distinguished three elements: the “solenomerite”, the “tibiotarsus” and a mesal process which he called the “postfemoral process”. There has been a long tradition of attempting to homologise parts of millipede gonopods with podomeres of ordinary walking legs, from which the gonopods have evolved. In the colobognathan orders, where the gonopods retain an obviously leglike structure, this is no problem, but in the eugnathan groups (Nematophora, Merocheta and Juliformia) the homologisation is not straightforward. Eugnathan gonopods often show some more or less obvious articulations, sutures, or constrictions which might correspond to articulations between podomeres, but apart from the articulation between coxa and telopodite, these subdivisions of the gonopod probably have nothing to do with the original leg segmentation. Thus, developmental studies on polydesmid millipedes indicated that the entire telopodite corresponds to the prefemur of a walking leg ( Petit 1976). It therefore makes sense to minimize use of a gonopod terminology suggesting homology with walking leg podomeres. VandenSpiegel & Golovatch (2014) already took such a step for Eviulisoma , using the functional term “solenophore” for what Jeekel (2003) called “tibiotarsus”. I suggest a further step in the same direction and herewith propose the terms “mesal acropodital process” and “intermediate acropodital process” for what Jeekel (2003) and Vandenspiegel & Golovatch (2014) referred to as postfemoral processes.

In order to minimize redundancy in the species descriptions, the following general description is presented. It is based on the Udzungwan species studied here, but when appropriate, additional literaturebased information from other species is added [in square brackets]. The description applies to adult males.

- Colour highly variable. Some species are uniform pale whitish (this seems not always to be a result of preservation), some are more or less uniform brownish or even black ( E. biquintum sp. nov., partly), many are more or less strikingly ringed, with metazonites or a part thereof being brown or black, contrasting with pale prozonites (e.g., E. zebra sp. nov., Fig. 1 View Fig. 1 ; E. akkariae sp. nov., Fig. 3 A View Fig. 3 ), one colour form of E. coxale sp. nov. has large brownish dots at the ozopore level, contrasting with a pale background ( Fig. 3B View Fig. 3 ), and one colour form of E. biquintum sp. nov. is pitch black with contrasting white legs ( Fig. 3C View Fig. 3 ).

- Lower part of head capsule ʻclypeo-labral regionʼ with numerous setae up to between antennal sockets; upper part (ʻvertigial regionʼ) with at most a few scattered setae, sometimes arranged in one or more pairs close to midline ( Fig. 4 View Fig. 4 ).

- Paranota completely absent or present as inconspicuous, simple ridges on ring 2 only ( Fig. 4 View Fig. 4 ). In some species, such ridges are seen in some specimens, not in others.

- Pleurosternal keels ( Fig. 5 View Fig. 5 ) simple, not prominent, not drawn out as posterior denticles, best developed on rings 2–5(7), decreasing in size backwards, but in some species recognizable as far back as ring 17.

- Legs 0.8–1.5 × as long as body diameter. Relative lengths of podomeres variable; femur the longest in

most cases, but in some short-legged species, prefemur is as long as femur, and in a few long-legged

ones, tarsus is as long as or longer than femur.

- Scopulae (dense coverings of modified setae) usually present on the ventral side of femur, postfemur,

of prefemora and femora flattened and hairless on some leg pairs. No podomeres with swellings or

- Coxa (cx) with a rounded distomedial lobe of variable size.

- Solenophore (sph) originating on lateral side of gonopod, very variable in shape, sometimes a simple rolled sheet, sometimes with a distinct ʻconductorʼ process guiding the solenomere; in species with an ‘open’ solenophore, an area with parallel ridges (e.g., Figs 12–13 View Fig. 12 View Fig. 13 , 18 View Fig. 18 ) is sometimes seen – whether similar ridges are present in rolled-up solenophores is unknown.

Females are generally larger than males. Although females have not been considered in the present species descriptions, it is worth noting that the ventral part of the third body ring (ʻepigyneʼ) and the basal part of the second pair of legs show considerable variation among species ( Brolemann 1920). Also within the Udzungwan species of Eviulisoma , several distinct types of ʻepigyneʼ and second legs exist, but often it was not possible to correlate a particular female morphotype with a particular species as defined by male characters.

Four species groups can be recognized among the Eviulisoma species treated here ( Table 3 View Table 3 ). All groups include species with an excavated male sternum 6 and a ventral process /lobe on sternum 5. One group is characterized by the presence of an intermediate acropodital process (iap), one by having the margins of the sternum 6 excavation lobed, one by having a laterally compressed mesal acropodital process (map) and one by having neither of these characteristics, but a large, sheet-like, unrolled solenophore (sph) and, notably, a separate basal part (ʻfemoriteʼ) of the acropodite. Three species are left ungrouped, being not particularly similar to any other new or previously described species. Two of the ungrouped species lack the sternum 6 excavation and the sternum 5 lobe. Fig. 1. Eviulisoma Zebra sp. nov., one of the strikingly marked species from the Udzungwa Mts. Photograph by Martin Nielsen. 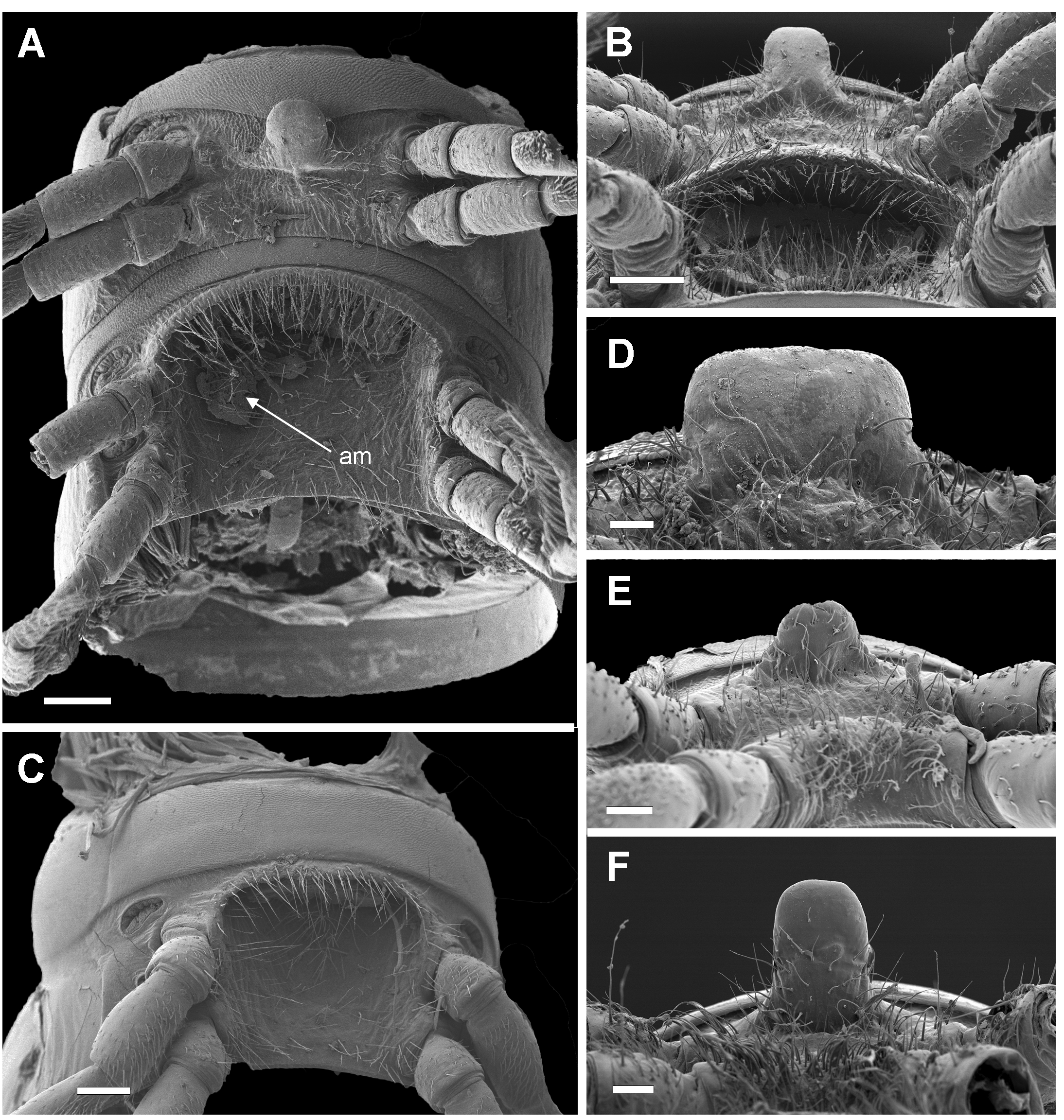 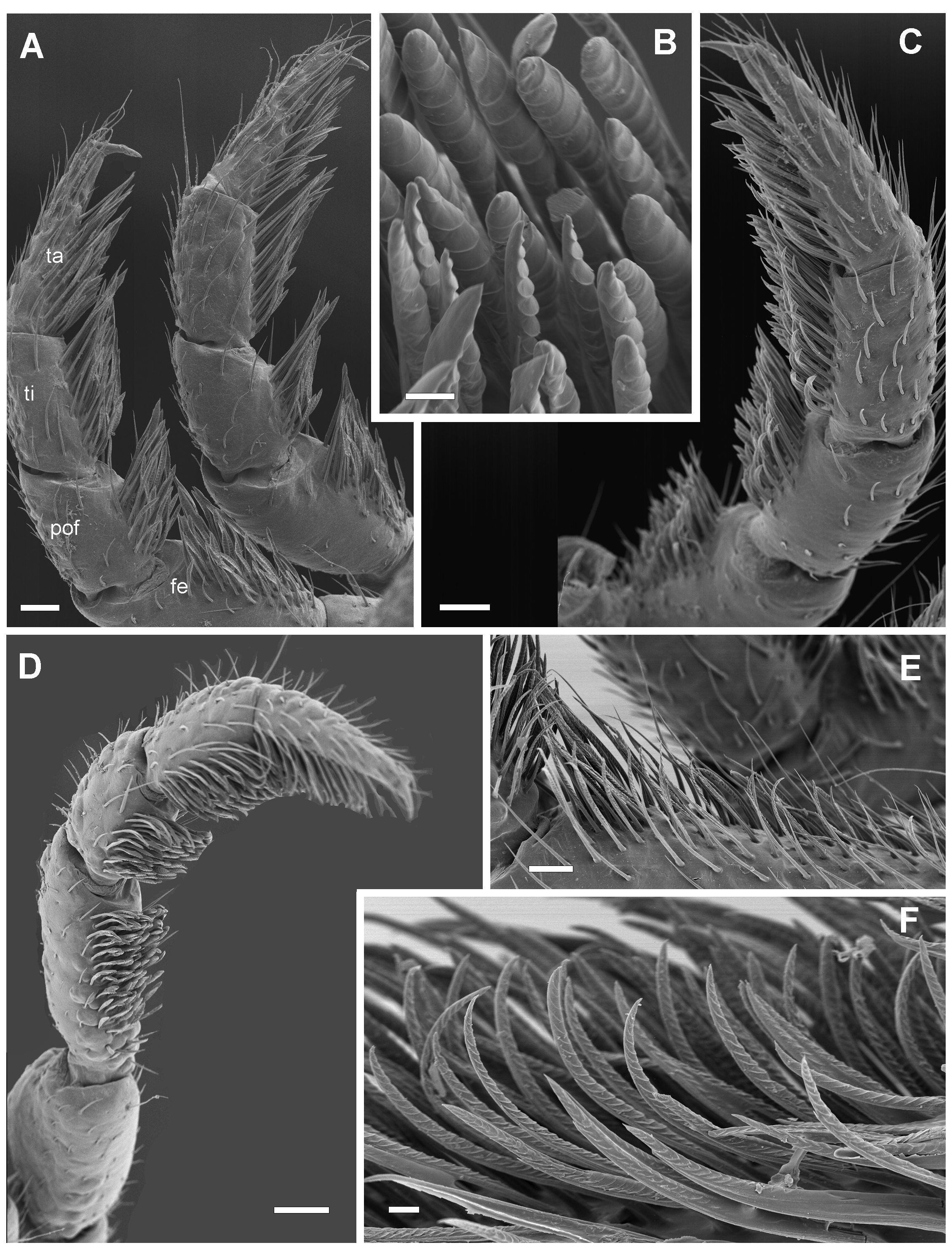 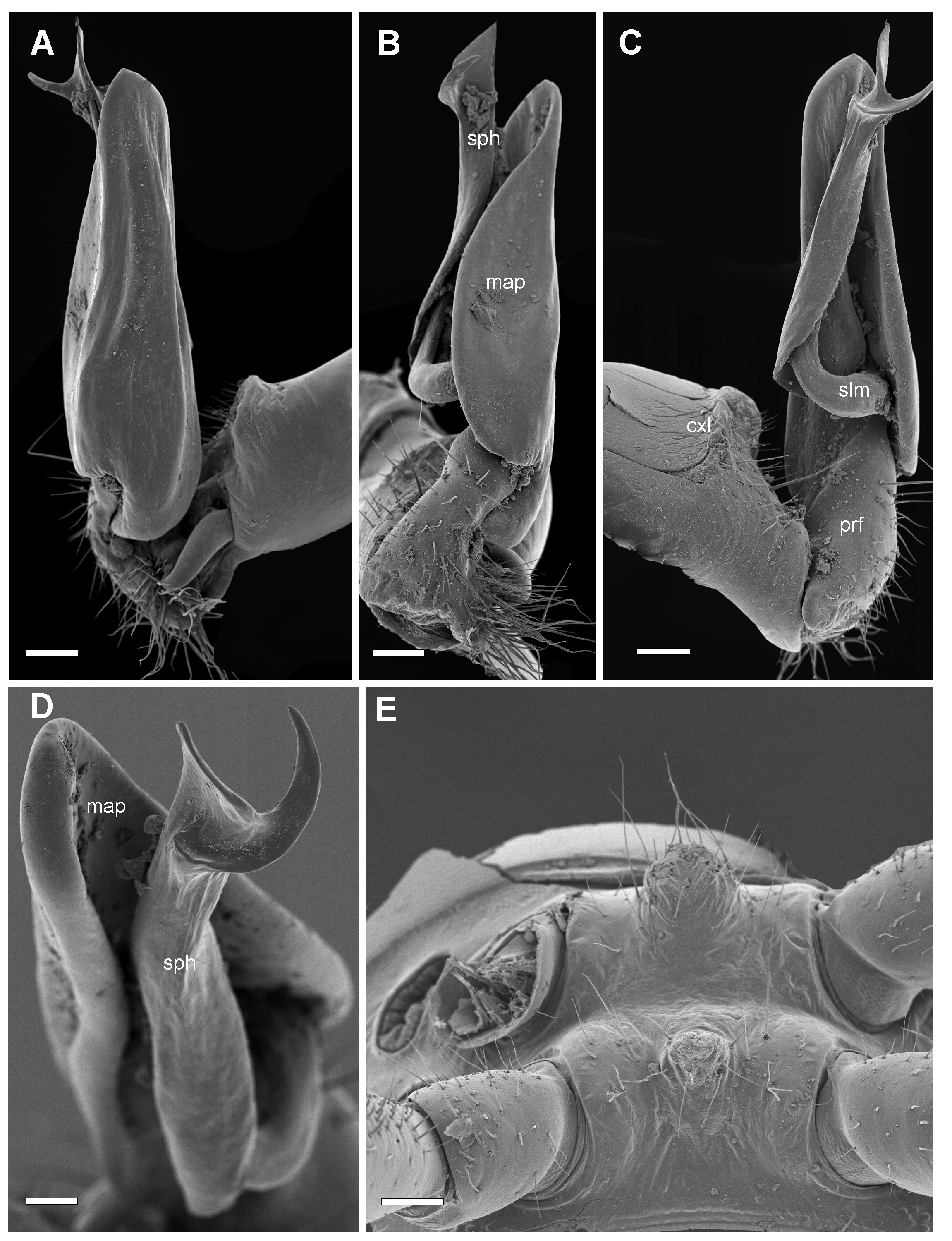