Pharynx II –IV; much thinner ventrally than dorsally or laterally. Anterior segments with a single pair of highly convoluted commissural blood vessels. Each segment posterior to about X with two pairs of variably branched lateral vessels; they are highly branched in posterior segments. In middle segments, at least, one branch of the lateral vessels joins the perivisceral sinus, but others end in the coelom. Nephridia paired, single or absent on 6 / 7; the next on or posterior to 12 / 13.

Internal pads of cells up to 150 µm thick cover much of the ventral body wall of X, anterior to male pores ( Fig. 16 View FIGURE 16 A). In some specimens the ventral pads appear glandular, interspersed with muscle fibers, but in others they appear predominantly muscular. Anteriorly, some muscle fibers coalesce into a band extending to dorsolateral wall of body near 9 / 10 ( Fig. 16 View FIGURE 16 A). Posteriorly, some muscle fibers join 10 / 11.

Each male pore within a shallow fold of thin epidermis subtending a short (60–70 µm), conical papilla, which forms a sheath surrounding the penis when protruded ( Figs. 15 View FIGURE 15 B, 16 B). Ental to the papillae, deep penial sacs typically extend posteriorly into XIII. The penial sacs are not greatly contracted when the penes are protruded: the sacs were the same length (1130 µm) in one specimen with one penis extended 850 µm beyond body wall and the other retracted; in another worm one sac was 1040 µm long, with the penis extending 980 µm. In some specimens the sacs were much shorter (about 600 µm, extending into XI), with retracted penes. Each penial sac surrounded by a very thin, transversecircular inner muscle layer (often indistinct), and a 15–50 µm longitudinal to somewhat spiral outer layer ( Fig. 16 View FIGURE 16 C; see also Brinkhurst [1998, Fig. 2 View FIGURE 2 C –D]). Ental end of sac bulblike, connected to a muscle band which usually joins the dorsal body wall musculature in XIV. Sac epithelium continuous with outer wall of the penis ( Brinkhurst [1998, Fig. 3 View FIGURE 3 A]). Outer and inner epithelial layers of penis joined by sparse, oblique fibers of apparent muscle tissue, particularly in ental half ( Brinkhurst [1998 Fig. 2 View FIGURE 2 D, 3 A]). Outer wall of penis is a thin layer of flattened cells ( Brinkhurst [1998, Fig. 2 View FIGURE 2 D]). Lumen of penis is variably twisted in ectal part ( Fig. 15 View FIGURE 15 B). Penes may be folded or coiled within the sacs when retracted. Penial structures of worms from other sites may be much smaller than those from the type locality, but morphology otherwise similar.

In partially mature specimens, penial sacs extend only into XI, and retractor muscles appear to join the body wall musculature in XII. Penes conical, 1 / 3 to 2 / 3 the length of penial sacs ( Figs. 15 View FIGURE 15 C, 16 D), appearing as simple folds of sac lining and containing attenuated ectal ends of atrial ducts. Outer penial folds and glandular pads not present, but a mass of cells extends forward from base of penial structure at male pore. Atrial ampulla weakly differentiated from duct, with thick epithelium (ca. 16 µm), a thin layer of muscle, and an outer layer of loosely packed cells, some of which are in weak clusters.

In a nearly mature specimen, penial structures extend to 12 / 13, the retractor muscle to 13 / 14, and elongate penes extend to near the male pore. The small epidermal fold is partially formed; the pads of cells anterior to the male pores have thin cell extensions extending through the body wall musculature to the epidermis. Spermathecal vestibule similar to that of mature worm, but ampulla small, ovoid, with cuboidal epithelium.

The elongate, highly modified penes of mature worms develop from simple extensions of the atrial ducts, contained within folds in the penial sacs. The penes of partially developed E. palustris   resemble fully developed penes of some other lumbriculids, such as Rhynchelmis rostrata Eisen   (cf. Fend and Brinkhurst [2000, Fig. 57]). The highly modified cell types of the mature worms develop gradually as the penes lengthen within the sacs. The small epidermal folds, which resemble the penial sacs of some other lumbriculids, appear late in the development.

The length and diameter of the penial structure in mature worms is quite variable, but does not appear strongly related to penial extension. Therefore, the extensive musculature surrounding the sac, including the ental “retractors” (or “retainers”, as suggested by Brinkhurst [1998]), appears to provide structural rigidity rather than directly extending the penis by contracting the sac. Protrusion thus appears to result at least in part from lengthening the penis itself. Brinkhurst (1998) suggested that the E. ( Premnodrilus   ) penis is everted during extension, but the observation that the sinuate lumen straightens during extension suggests lengthening of the surrounding tissue. A possible mechanism would be contraction of the thin muscle strands within the penis, which may increase turgor as the expanded base is contracted. The “cuticularized penis sheath” mentioned by Wassell (1984) was not prominent or rigid in material examined in the present study, and penes were usually somewhat coiled or even folded back within the sacs in this species as well as in E. daneus   . The small epidermal folds were often seen in an everted state, with the short papillae visible externally ( Fig. 15 View FIGURE 15 B); this may be controlled by action of the retractor muscles. 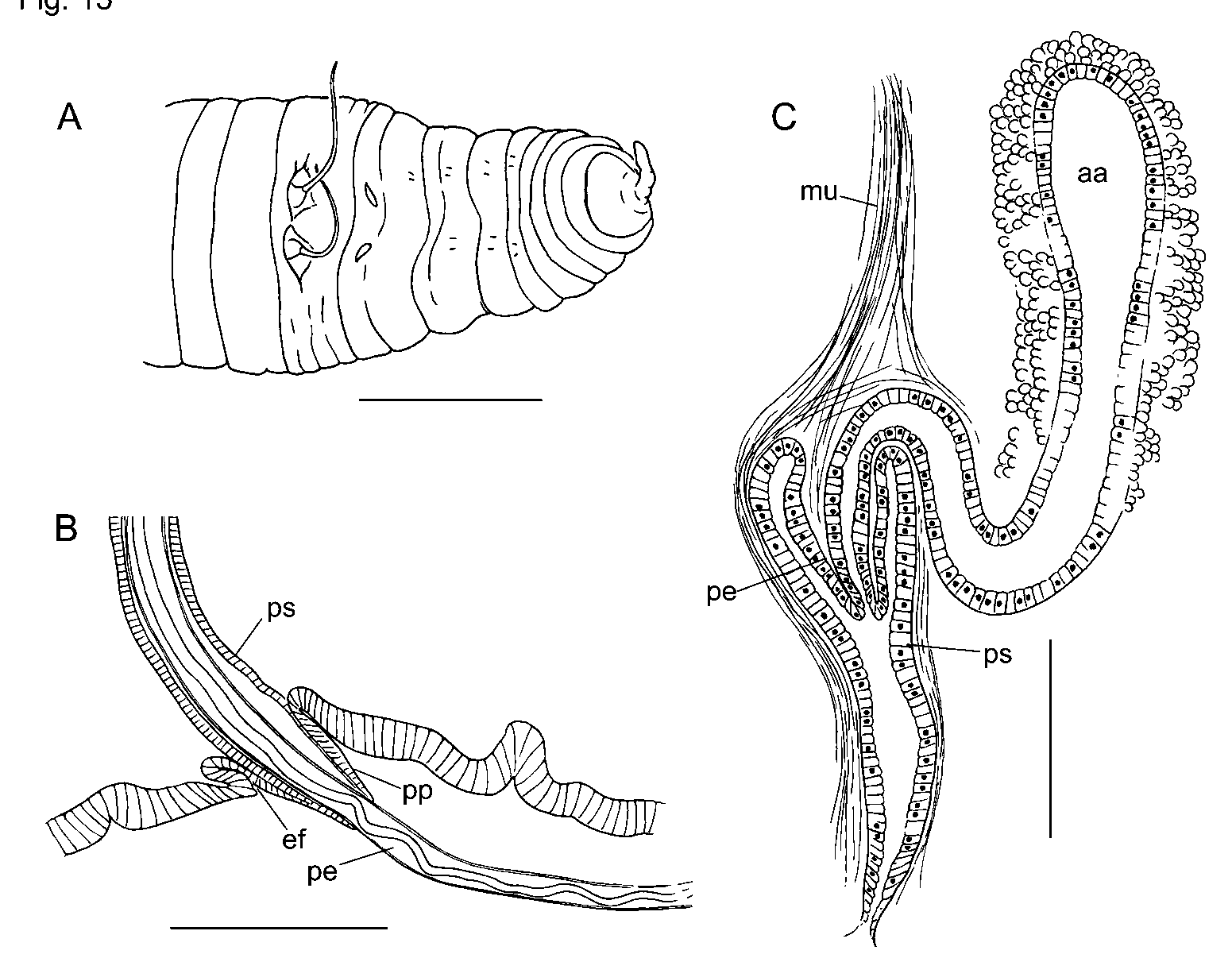