The first two descriptions of Anacroneuria species   in northeastern Brazil were carried out based on the females from Bahia State: A. parilobata (Klapálek, 1922)   and A. lacunosa (Navás, 1926)   . Additions to knowledge about the genus were only reported in 2013, when Righi-Cavallaro et al. (2013) described five new species: A. amargosa   , A. bahiensis   , A. kariri   , A. lencoensis   , and A. quilombola   . Duarte & Lecci (2016) described A. singela   , adding two new records ( A. debilis   and A. terere   ) and a key to the males of Anacroneuria   from the northeastern semi-arid region. Only in 2017, a checklist was presented for Anacroenuria species from Bahia State, including a list of described life stages ( Almeida & Duarte 2017). In this study, A. patioba   was described and a new record of A. paprockii   was reported ( Almeida & Duarte 2017). Including the present contribution, only two of the 12 Anacroneuria species   recorded in Bahia have described immatures ( Table 1). Among these two species, only A. bahiensis   was described based on specimens collected in the Bahia State.

The study of the genus Kempnyia   has a much more recent history in the region than Anacroneuria   . The genus was recorded in a few points in the Bahia State, as it is restricted to regions of the Atlantic Forest at high altitudes ( Fig. 4 View FIGURE 4 ). Duarte et al. (2014) recorded the only four species found in this state: Kempnyia alterosarum Froehlich, 1988   , K. gracilenta ( Enderlein, 1909)   , K. jatim Froehlich, 1988   , and K. neotropica (Jacobson & Bianchi, 1095)   . So far, only two of these four species have described nymphs; however, none of them has been made based on material from Bahia State. The four species were recorded only in the Camacan region, in the Serra Bonita Reserve ( Fig. 4 View FIGURE 4 ). It is possible that the genus has a wider distribution than it is currently known and that more species will be recorded in the state since many areas remain unsampled.

In this study, we updated the list of Perlidae   from Bahia State, which was originally published by Almeida & Duarte (2017) ( Table 1). Currently, there are 16 species of Perlidae   in this State, 12 belonging to Anacroneuria   and four to Kempnyia   ( Table 1). Among the states in northeastern Brazil, Bahia is the one with the highest number of Perlidae   species recorded. However, there are still many areas to be sampled ( Fig. 4 View FIGURE 4 ), and it is likely that the number of species will increase due both to the discovery of new species and new records in the state. In addition, new studies are necessary to describe the nymphs and solve taxonomic issues, such as the old species described based only on females ( A. lacunosa   and A. parilobata   ). Regular surveys of stonefly fauna in northeastern Brazil are recent, having a steady rhythm only since the 2010s. Therefore, it is important to maintain the effort in the Northeast Region of Brazil with the objective of expanding knowledge on stoneflies, which is still incipient. 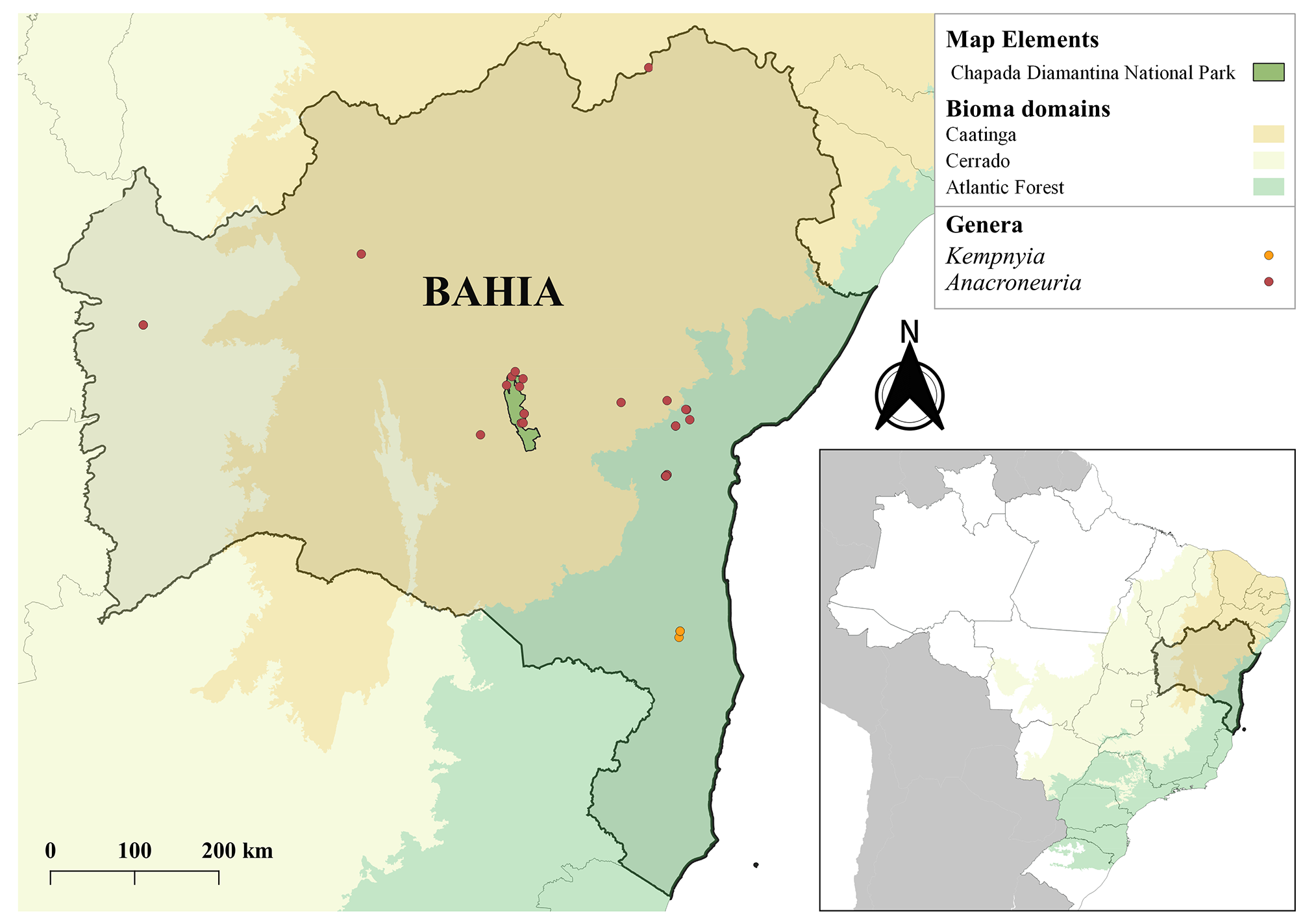