Etymology. From the Greek word thegaleos (pointed, sharp), in reference to the anterolaterally pointed pronotum of females of this species, one of the differentiating features.

Description. FEMALE (habitus: Fig. 154 View FIGURES 147 – 155 ). Length = 3.4 mm. Head ( Figs 147–149 View FIGURES 147 – 155 ) dark with green luster under most angles of light except scrobal depression more distinctly blue to purple and interantennal prominence and frons with more coppery to reddish-violaceous lusters; in lateral view ( Fig. 148 View FIGURES 147 – 155 ) highly convex and broadest dorsally, only about 1.1× as long as high; in frontal view ( Fig. 147 View FIGURES 147 – 155 ) about 1.4× as wide as high; in dorsal view ( Fig. 149 View FIGURES 147 – 155 ) about 1.4× as wide as long with interocular distance slightly greater than 0.4× head width, without lightercolored or sulcate ocellocular mark, though under some angles of light with very slight angulation ( Fig. 149 View FIGURES 147 – 155 ) or abrupt change of color from vertex (green) to frons (dark) at level of ocellocular mark of other species, and OOL: POL: LOL: MPOD = 12: 15: 11: 9. Frontovertex with vertex coriaceous-alutaceous to near level of posterior ocelli but smooth and shiny posterior and lateral of ocelli and on frons except for setiferous pits in line along inner orbit, along dorsal margin of scrobal depression, in Π-like line on either side of and around posterior margin of anterior ocellus to scrobal depression, and with 4 (left side) and 3 (right side) setiferous pits between the two longitudinal setal lines. Scrobal depression ( Fig. 147 View FIGURES 147 – 155 ) dorsally abruptly angled to and therefore distinctly delimited from frons, broadly Π-shaped with lateral margin curved out from torulus toward lower inner orbit such that distinct parascrobal regions lacking, and dorsal margin broadly arched between inner orbits and separated from anterior ocellus by about 1.5× an ocellar diameter; meshlike coriaceous to coriaceous-imbricate similarly to interantennal prominence. Interantennal prominence and lower face with brownish, slender-lanceolate setae. Mandibular dentition not clearly visible, but apparently tridendate. Labial and maxillary palps brown. Antenna ( Fig. 150 View FIGURES 147 – 155 ) with inner surface of scape mostly yellow ( Fig. 147 View FIGURES 147 – 155 ) but dorsal and ventral margins dark and outer surface dark brown dorsally and lighter brown ventrally, otherwise dark with greenish luster on pedicel and basal flagellomeres, where usually with more distinctly contrasting white-reflective setae; length of pedicel + flagellum about 2× head width; scape moderately compressed basally with ventral margin sinuate so as to be broadest subbasally and narrowed apically; length[width] of scape: pedicel: funiculars: clava = 66[16]: 22[10]: 14[9], 35[9], 39[10], 42[12], 29[14], 26[16], 19[16], 17[16]: 43[17].

Gaster ( Figs 151, 154 View FIGURES 147 – 155 ) similarly dark as mesosoma except ovipositor sheaths beyond syntergum yellow and tergites with some metallic lusters, including more coppery luster on penultimate tergum and green on syntergum under some angles of light; quite distinctly meshlike coriaceous with long brownish setae, mostly in single transverse row dorsally across tergites except for more extensively setose syntergum; syntergum ( Fig. 151 View FIGURES 147 – 155 ) longer than basal width or than penultimate tergite, with dorsal surface in single plane such that syntergal flange poorly differentiated as posteriorly rounded bare region behind setae; ovipositor sheaths projecting only slightly beyond syntergal flange.

Remarks. Ooderella thegalea , O. spinositegula and O. melanosceles comprise a species trio, as discussed under the latter species. The only known female differs from those of the other two species in having somewhat shorter fore wings, not extending to the posterior margin of the propodeum ( Fig. 153 View FIGURES 147 – 155 ). It also lacks distinct ocellocular marks ( Fig. 149 View FIGURES 147 – 155 ), which are possessed by females of the other two species of a similar size ( Figs 47 View FIGURES 45 – 53 , 120 View FIGURES 118 – 127 ), though small females of O. spinositegula lack distinct marks. The tegular tufts of setae are only about as long as the maximum width of the tegula ( Fig. 155 View FIGURES 147 – 155 ), similar to O. melanosceles ( Fig. 51 View FIGURES 45 – 53 ) and shorter than for O. spinositegula ( Fig. 126 View FIGURES 118 – 127 ). Because only a single female is known, it is uncertain whether other described color and setal differences may be useful for differentiation, such as the outer surface of the scape being darker than the inner surface and the frons being somewhat more extensively setose than for females of the other two species, which either lack or have only one or two setiferous pits between the row along the inner orbit and the row on either side of the anterior ocellus. 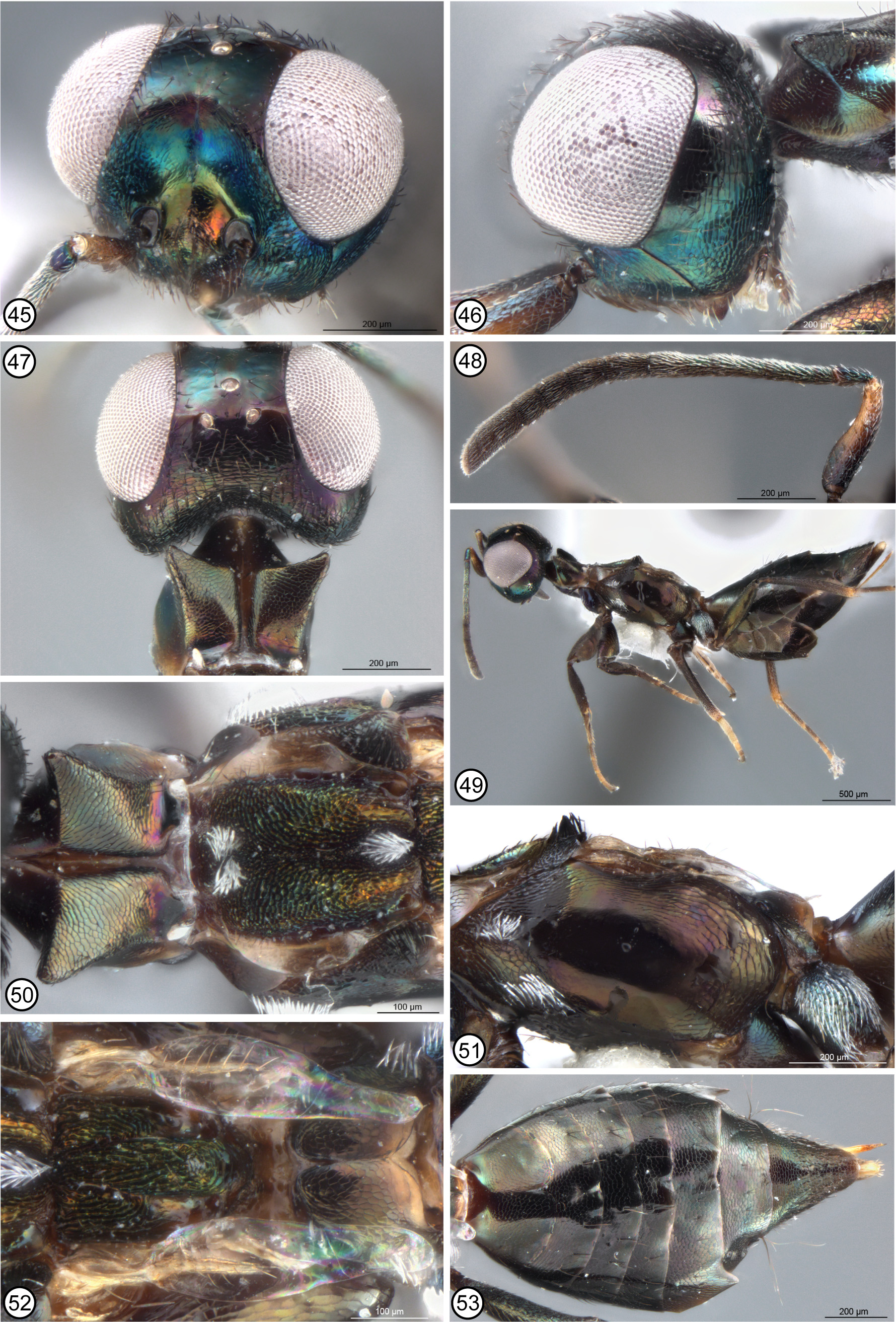