Diagnosis. The species belongs to the zimmermani species-group characterized by tibiae expanded to the middle, with the outer edge broadly rounded and with spines very close to each other at the apical half. Among species in the group, it differs from Scol. zimmermani Lopes-Andrade by its biconcave prosternum; Scolytocis philippinensis Lopes-Andrade and Scol.   thayerae Lopes-Andrade also have biconcave prosternum, but in the former the longitudinal carina in front of coxae is conspicuous; it closely resembles Scol. thayerae, which is more elongate (TL/EW 2.11–2.25) and male genitalia has tegmen narrower at apical half. Additionally, this species differs from all other known Scolytocis   by its large body size (TL> 2.40 mm). Scolytocis howdeni Lopes-Andrade and Scol.   fritzplaumanni Lopes-Andrade may reach 2.00 mm, and a few specimens of Scol. thayerae are 2.05 mm long. All other Scolytocis   are lesser than 2.00 mm.

Hypomera with coarse shallow punctures, the surface between them somewhat rugose. Pro-, meso and metatibiae with similar shape and length, approximately three times as long as broad, expanded from base to basal two-thirds of their lengths and with outer edge of apical portion broadly rounded; outer edge with spines at the apical three-fourths; inner facet of protibia with a narrow tuft of long bristles along the apical half of the inner margin. Metaventrite with discrimen being one-tenth the length of the ventrite at the longitudinal midline; punctures coarse, concentrated at the anterior portion and scarce posteriorly; surface between punctures and elsewhere microreticulate. Abdominal ventrites with coarse punctures, separated by a puncture-width or less; length of the ventrites (in mm, from base to apex at the longitudinal midline) as follows: 0.31, 0.09, 0.10, 0.10, 0.21; first abdominal ventrite bearing a small, circular setose sex patch positioned posteriorly of the center, with a transverse diameter of 0.04 mm. Male abdominal terminalia in the holotype ( Fig. 4–6 View FIGURES 1 – 6 ) with sternite VIII (damaged during dissection and not shown in figures) with posterior margin curved inward, bearing minute setae medially and long setae at the lateral corners; lateral margins converging; anterior margin membranous and devoid of median strut. Tegmen ( Fig. 4 View FIGURES 1 – 6 ) slightly shorter than penis; anterior half mostly membranous and bearing a longitudinal spatulate sclerotization; posterior half with lateral margins converging to an acute apex. Basal piece ( Fig. 5 View FIGURES 1 – 6 ) subquadrate. Penis ( Fig. 6 View FIGURES 1 – 6 ) extremely elongate, subcylindrical, slightly curved downward, widest at the anterior portion and lateral margins gradually converging to an acute apex.

Etymology. The species epithet is a Latinized Greek mythical name of King Acrisius' daughter and mother of Perseus   impregnated by Zeus, in spite of being locked by her father to keep her childless, Zeus came in a disguise of golden rain; noun in apposition.

Comments. Besides the holotype, no other specimen is known. We believe its sampling in leaf litter was incidental. It is the largest known Scolytocis   and the second largest representative of Xylographellini, being smaller only than Xylographella speciosa Lopes-Andrade   , which may reach 2.95 mm. We include Scol. danae   sp. nov. in the zimmermani species-group, together with Scol. philippinensis   and Scol. thayerae from the Philippines, and Scol. zimmermani from Fiji. 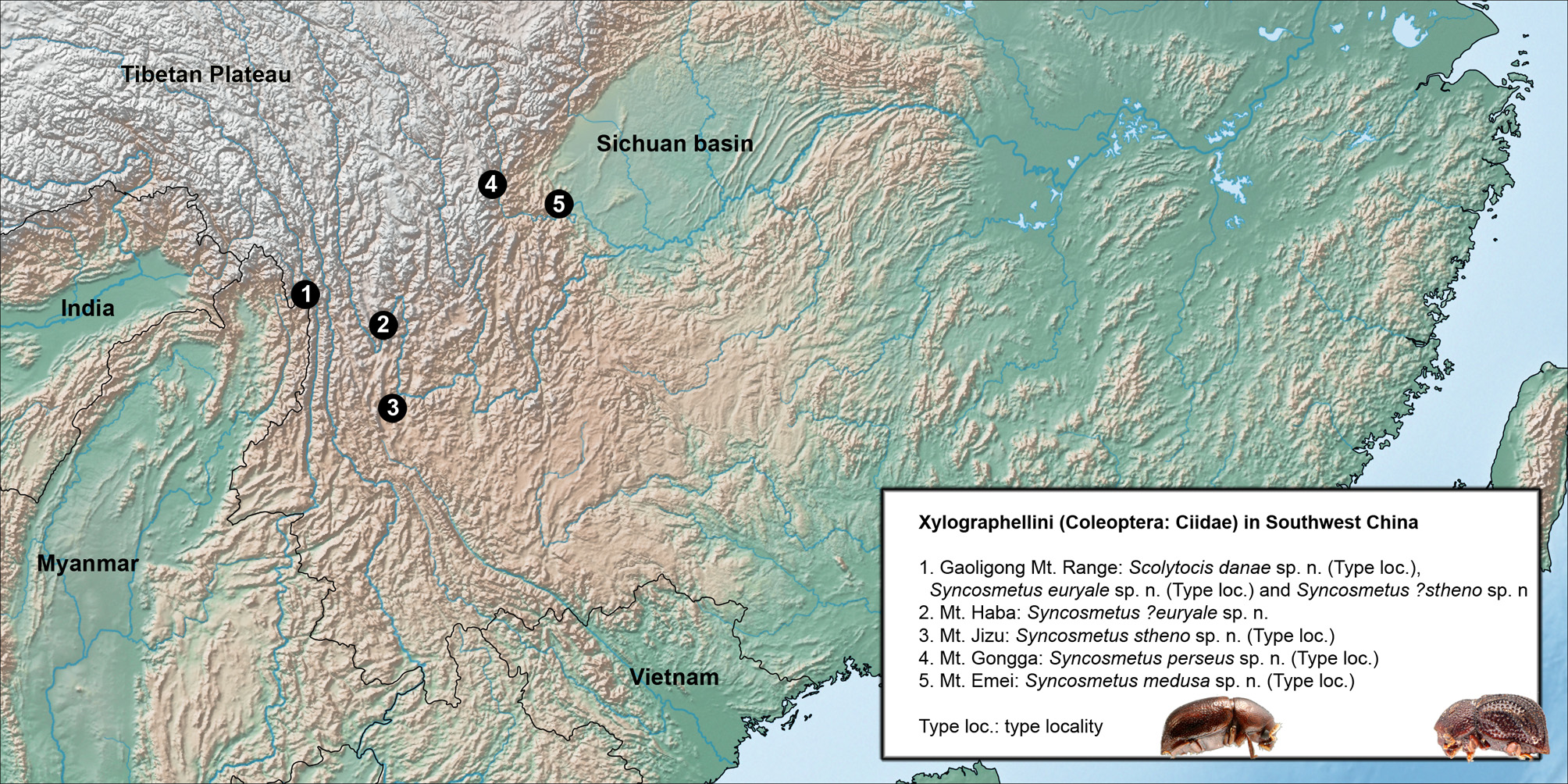 FIGURE 35. Known distribution of Xylographellini beetles in the Palaearctic Region outside of Japan. FIGURE 37. Lower part of the Maximum Likelihood inference phylogram, upper part of which is depicted on Fig. 36. HT: holotype. 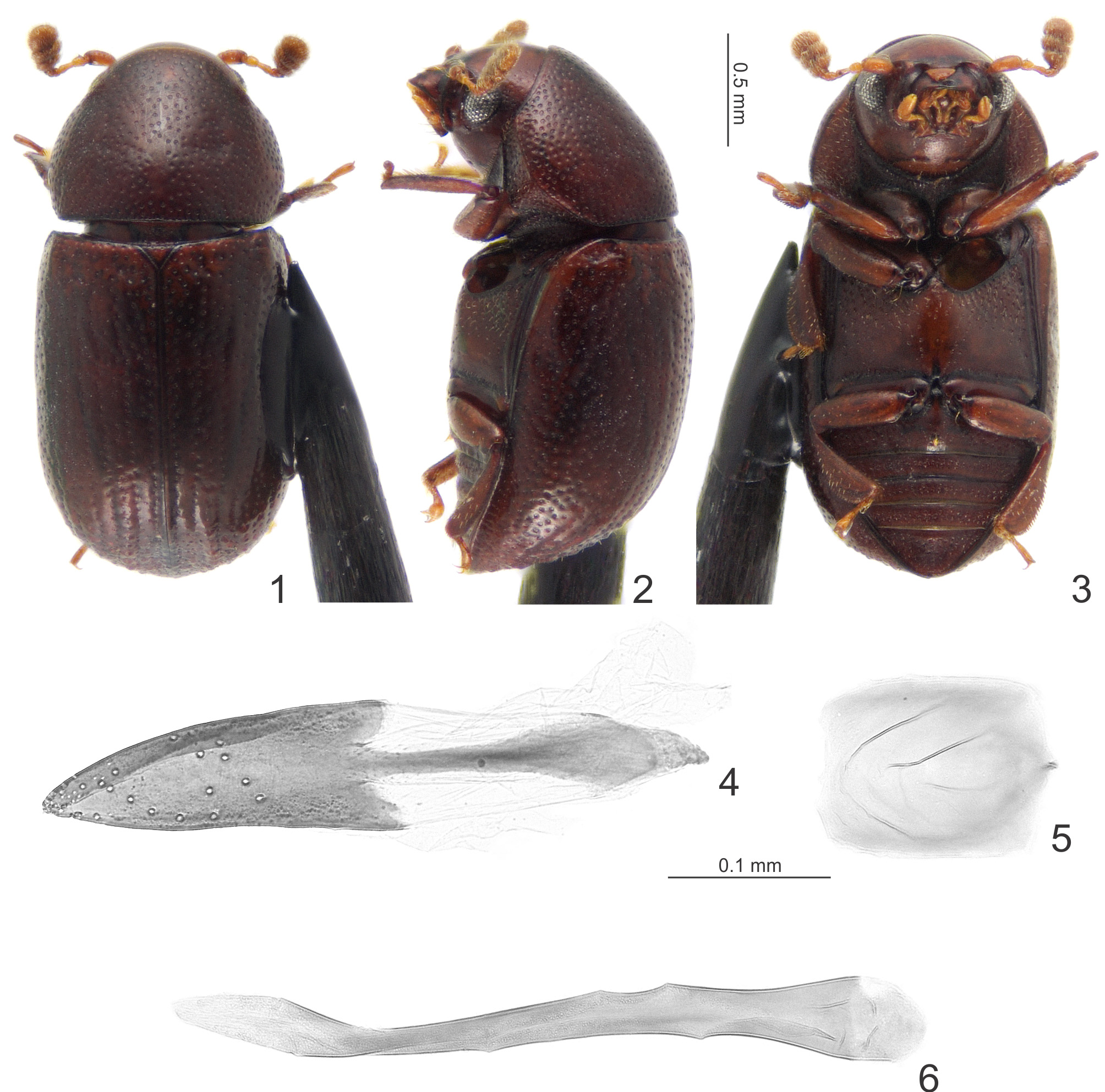