Distribution ( Fig. 13 View Figure 13 ). Northeastern Western Australia in the vicinity of Fitzroy Crossing and Halls Creek, and the Top End of the Northern Territory within some 60 km of the WesternAustralian border. The only known localities are 183 km WSW of Halls Creek, 14 km east of Halls Creek, some 40 km south of Halls Creek and 110 km east of Kununurra. Specimens have been taken in December and January but most likely occur over a much wider range of months.

Wings. Hyaline. Fore wing with fused stems of veins M and CuA not. complete, the veins abutted rather than fused as one; venation dark brown; without infuscations; basal membrane grey to black, sometimes with hints of brown. Hind wing with 5 apical cells; venation brown; blackish infuscation along 2A and on wing margin at distal end of vein 2A; plaga grey.

Timbals with the ribs not heavily sclerotized; four long ribs spanning the width of timbal membrane and a much shorter anterior rib terminating before lower end of adjacent intercalary rib.

Distinguished from most other species of the Pauropsalta   group of genera (i.e. those genera with species bearing an infuscation at the distal end of hind wing vein 2A) by the following combination of characters. Fore wing veins M and CuA with their stems closely abutted but not fused as one (view under magnification), a fore wing length longer than 27 mm, and a pronotum with a background that is dominantly brown rather than black.

Pauropsalta agasta   is most similar to Pau. adelphe   . While their distributions appear to be separate ( Pau. agasta   from WesternAustralia and the far west of the Top End of the Northern Territory, Pau. adelphe   from the central part of the Top End) there is little to distinguish the two species. As a general rule Pau. agasta   differs from Pau. adelphe   in having the markings on the mesonotum brown rather than black, but examination of the male genitalia is required for positive identification.

The male genitalia differ in the distal portion of the endotheca. In Pau. agasta   the apical part in dorsal view is not bifurcate; that of Pau. adelphe   is bifurcate.

Etymology. From the Greek agastor meaning twin or near kinsman, and referring to the close similarity of this species to Pau. adelphe   .

Song ( Fig. 13 View Figure 13 ). The body of the song is composed of a series of echemes. Each echeme is less than 1 s in length, while the echemes occur at a rate of slightly above 1 echeme per second. The majority of echemes fall between 2 kHz and 20 kHz. 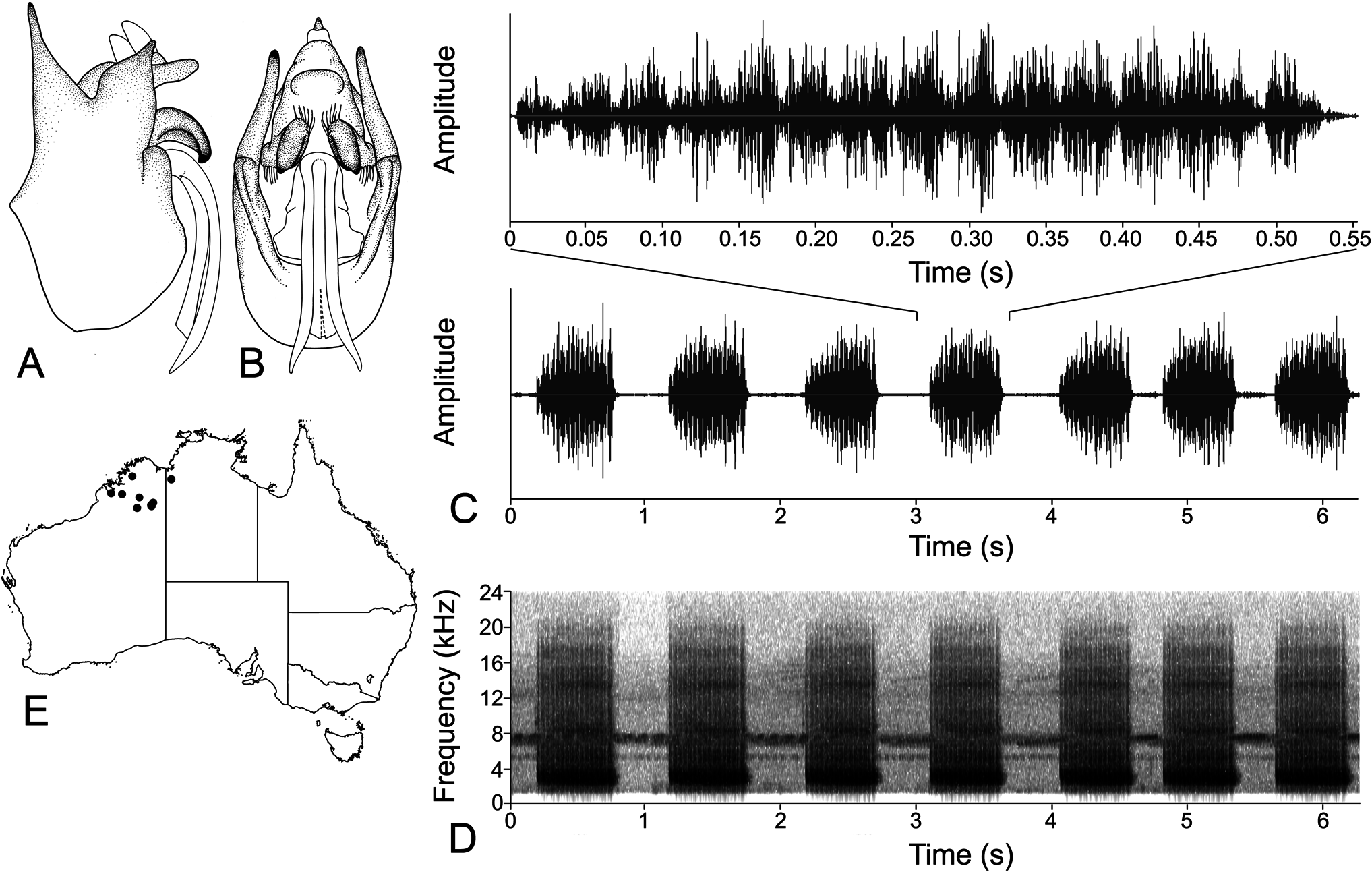