Distribution ( Fig. 15 View Figure 15 ). South Australia where it has been taken at Evelyn Creek near Mount Willoughby Homestead (some 150 km north of Coober Pedy), on the edge of the Flinders Ranges and in the mountains east of Port Augusta as far south as Peterborough, and far western New South Wales from Broken Hill north to Fowlers Gap and at Wilcannia on the Darling River. It is a locally common species and can be found in most years at Horrocks Pass west of Wilmington in South Australia and at Fowlers Gap north of Broken Hill in New South Wales. There are records for mid November to early March.

Thorax. Pronotum black, usually with brown and pale yellow markings; fascia along midline pale yellow, usually extending from near head towards or almost to pronotal collar, often discontinuous; sometimes a transverse muddy yellow marking on either side of midline dorsally abutting and/or on anterior margin of pronotal collar; pronotal collar between lateral angles black with posterior margin edged muddy yellow or brown to varying degrees; lateral margin of pronotal collar not, or barely, ampliate. Mesonotum primarily black with pale yellow or brown markings; usually a reddish brown marking on either side from, or near, anterior arms or the cruciform elevation to, or almost to, pronotum between lateral and submedian sigilla, this marking projecting inwards to varying degrees around its mid length and sometimes meeting; sometimes a pale yellow blotch between anterior arms of cruciform elevation; lower lateral area sometimes with a pale yellow streak; scutal depressions occasionally visible as black dots surrounded by pale yellow; cruciform elevation nearly always pale yellow, rarely nearly all black; anterior arms tending black distally to varying degrees, often a black fascia down midline. Metanotum black at hind wing base, remainder pale yellow or brown, sometimes black near dorsal midline.

Opercula. For the most part not reaching distal margin of tympanal cavity; widely separated; flat other than a low rounded swelling of epimeron 3; black, sometimes yellowish brown on distal half.

Female. Similar to male. Abdominal segment 9 yellowish brown, with a black or dark brown fascia on either side of midline extending distally from the anterior margin but not reaching posterior margin. Ovipositor sheath extending 1.75–2.0 mm beyond apex of abdomen; dark brown to black.

A distinctive species differing from all other species of Pauropsalta   and allied genera (those species with an infuscation on wing margin at the distal end of hind wing vein 2A) in having fore wing veins M and CuA completely fused as one before the basal cell, a rostrum that almost reaches the apices of the hind coxae, a fore wing 20 mm or longer, and a second abdominal segment that is largely jet black.

The male genitalia have a broad, tapering upper pygofer lobe, small beak-like claspers, robust pseudoparameres that lie laterally against the endotheca, and a simple apical termination to the endotheca. 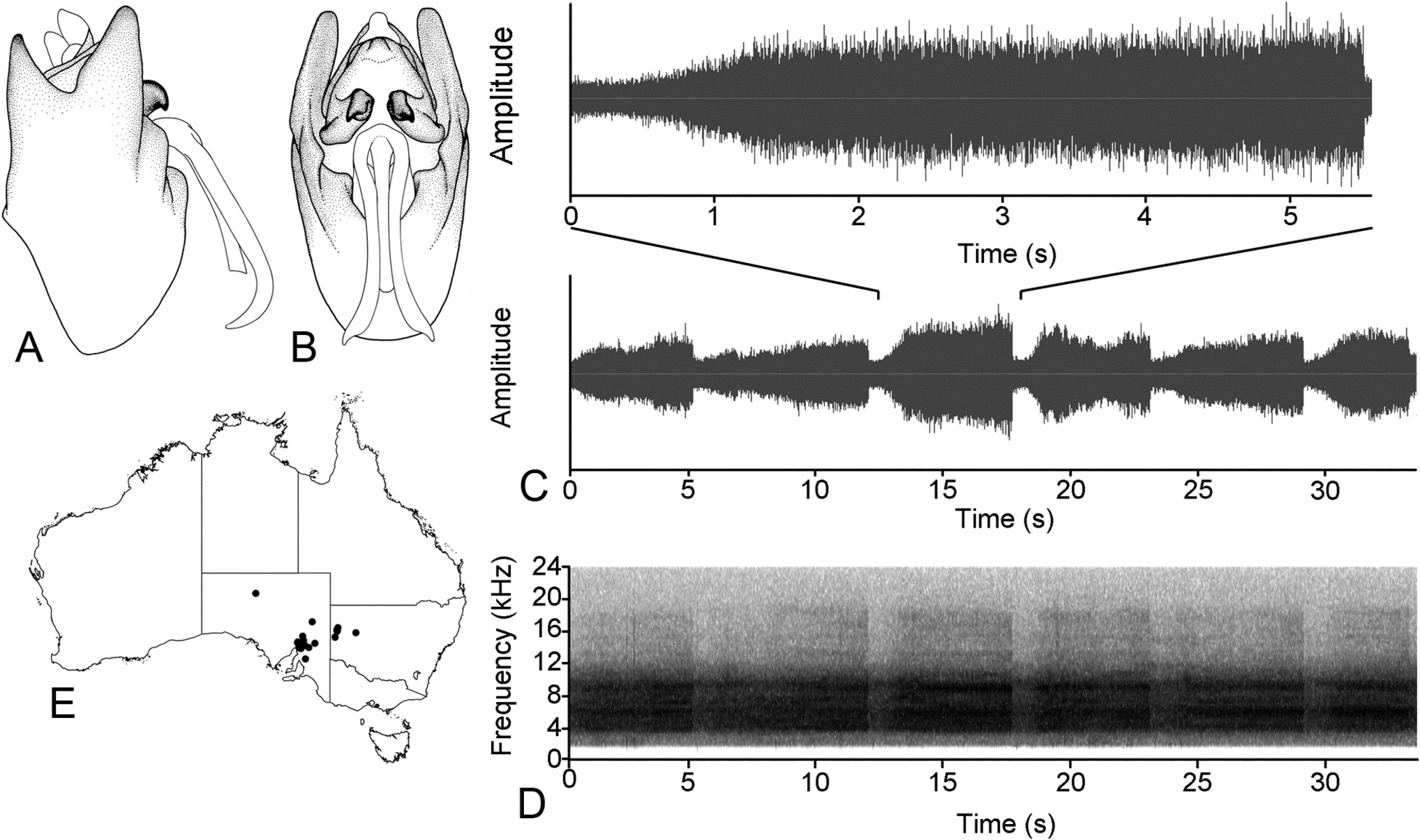