The paratype male from Walshs Pyramid near Gordonvale is not this species, but a specimen of P. ewarti   described above.

Distribution ( Fig. 27 View Figure 27 ). Confined to a small area of northeastern Queensland where it is found in the dryer parts of the Atherton Tablelands and adjoining districts. The most northern record is from Station Creek about midway between Mount Molloy and Mount Carbine. It is occurs as far south as the Mount Garnet district and inland to Irvinebank and nearby Emuford.There are records from mid October to early February but it appears to be most common during the latter half a December and January.

The description of Ewart (1989) is based on a mixed series of true opaca   and at least one, or perhaps two, very similar undescribed species. We therefore re-describe opaca   and provide distinguishing characters.

Wings. Hyaline. Fore wing with fused stem of veins M and CuA not complete, the veins abutted rather than fused as one; venation brown; inconspicuous infuscation distally on clavus; basal membrane muddy brown. Hind wing with 5 apical cells; venation brown except for pale yellowish brown 2A and 3A; plaga muddy white to brown; black infuscation on wing margin at distal end of vein 2A.

Opercula. For the most part not reaching distal margin of tympanal cavity; widely separated; a low rounded swelling of epimeron 3; black, usually tending yellowish brown on distal half.

Timbals with four long ribs spanning the width of timbal membrane and one much shorter anterior rib terminating before lower end of adjacent intercalary rib.

Female (Pl. 4). Similar to male. Abdominal segment 9 dark brown, with a black fascia on each side of midline extending distally from the anterior margin but not reaching posterior margin; Ovipositor sheath extending some 2.0– 2.5 mm beyond apex of abdomen; dark brown to black.

Male genitalia are unique in having an aedeagus with a pair of pseudoparameres situated laterally near the base of the endotheca that are very small, short, hair-like, barely discernible, and a tubular endotheca that terminates in a small down-turned “beak” and a pair of lateral “ears”.

Song ( Fig. 27 View Figure 27 ). The song is composed of phrases with clicks and a single echeme. Clicks occur continuously for c. 6 s and this is followed by an echeme. The echeme is usually c. 7 s in length. The song ranges in frequency from 4–16 kHz with the dominant frequency occurring between 4 kHz and 12 kHz. 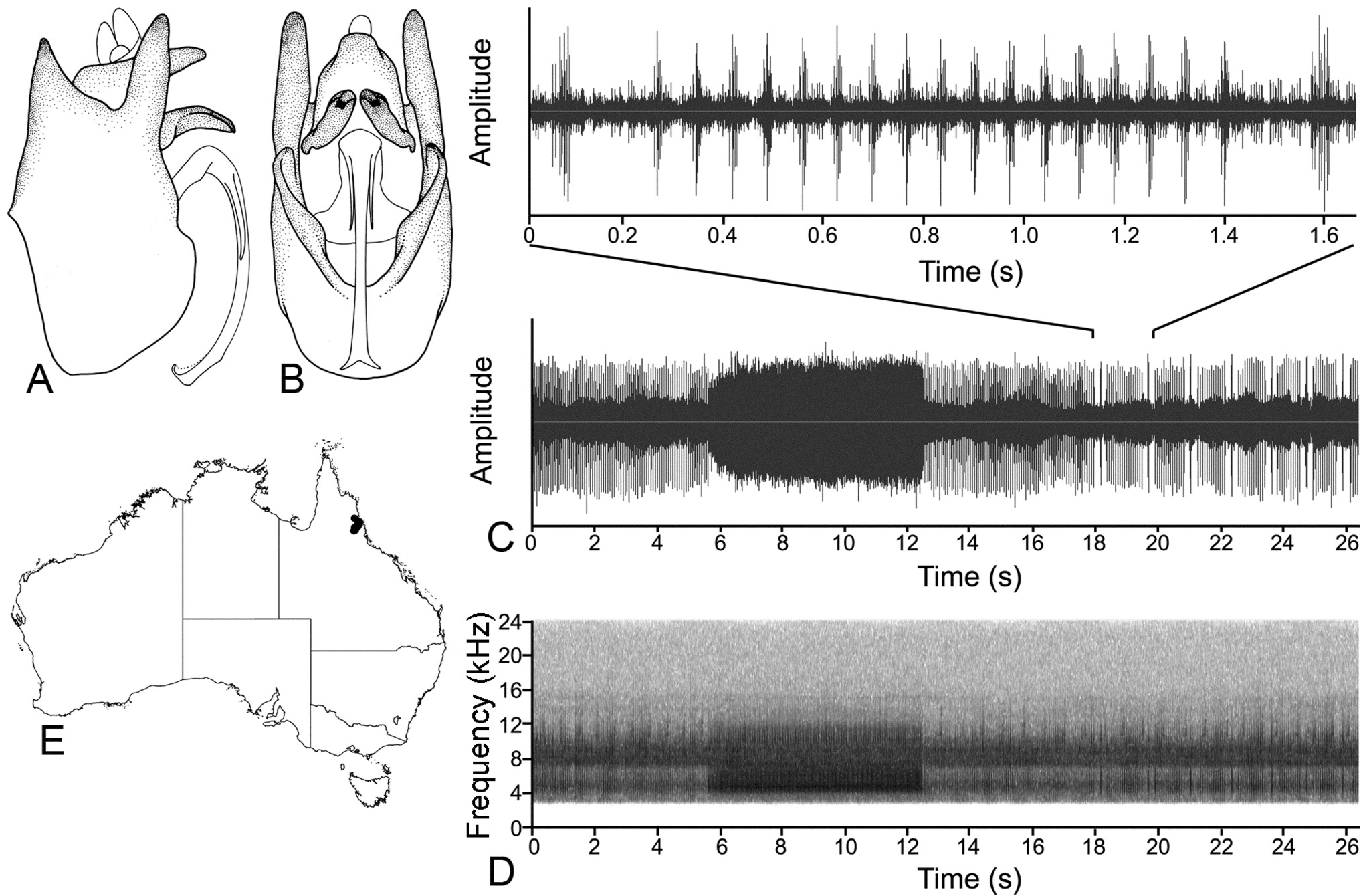