Distribution ( Fig. 35 View Figure 35 ). Known only from the vicinity of Expedition Range, central eastern Queensland, especially from the Blackdown Tableland.Adults have been taken from early November to mid January.

Opercula for the most part not reaching distal margin of tympanal cavity; widely separated; flat other than a low rounded swelling of epimeron 3; pale yellow to yellowish brown with black epimeron 3 swelling.

Female (Pl. 1). Similar to male. Abdominal segment 9 brown, anterior margin edged black, a black fascia along midline extending from anterior margin to, or almost to, caudal beak, a black spot on each lateral side subapically. Ovipositor sheath long, extending some 1.0– 1.5 mm beyond apex of abdomen; dark brown to black.

Measurements. Range and mean (in mm) for 8♂♂ and 4♀♀; includes smallest and largest of available specimens.

Distinguished from many other Pauropsalta species and allied genera in having 6 apical cells in the hind wings (in both wings) instead of 5 and a red fore wing costa and/or subcosta. Amongst those species with 6 hind wing apical cells care should be taken not to confuse this species with Haemopsalta aktites , H. rubea , Palapsalta circumdata or Popplepsalta rubristrigata , all species black with reddish markings.

Clearly differs from Haemopsalta aktites in size, the fore wing length being greater than 19 mm while that of H. aktites never reaches more than 17.4 mm. Males differ from those of Popplepsalta rubristrigata and H. rubea in lacking a broad fascia along the ventral midline of the abdomen. They differ from Palapsalta circumdata in having abdominal tergites entirely black except for a reddish or yellow posterior margin; in Pal. circumdata the lateral areas of abdominal segments 2–5 are dominantly reddish or yellow. The male genitalia differ from those of Po. rubristrigata in lacking a large sharply-pointed protruding secondary basal lobe that is clearly visible in lateral view (without dissection), and pseudoparameres that are much longer than the endotheca. There appears to be no consistent difference in male genitalia between this species and H. rubea .

Females differ from Po. rubristrigata and Pal. circumdata in having the ovipositor sheath just passing the end of the abdominal segment 9 rather than very long and extending more than at least 2 mm beyond. They differ from H. rubea in lacking a broad fascia along the ventral midline of the abdomen.

Etymology. From Latin flamma, meaning flame, referring to the red on the abdomen of this species.

Song ( Fig. 35 View Figure 35 ). The song is composed of a series of phrases that include a single click followed by an echeme. The echeme is usually c. 2 s in length. Each phrase is c. 2 s in length. The phrases occur at a rate of c. 0.4 phrases per second. The frequency of song occurs between 2 kHz and 22 kHz. 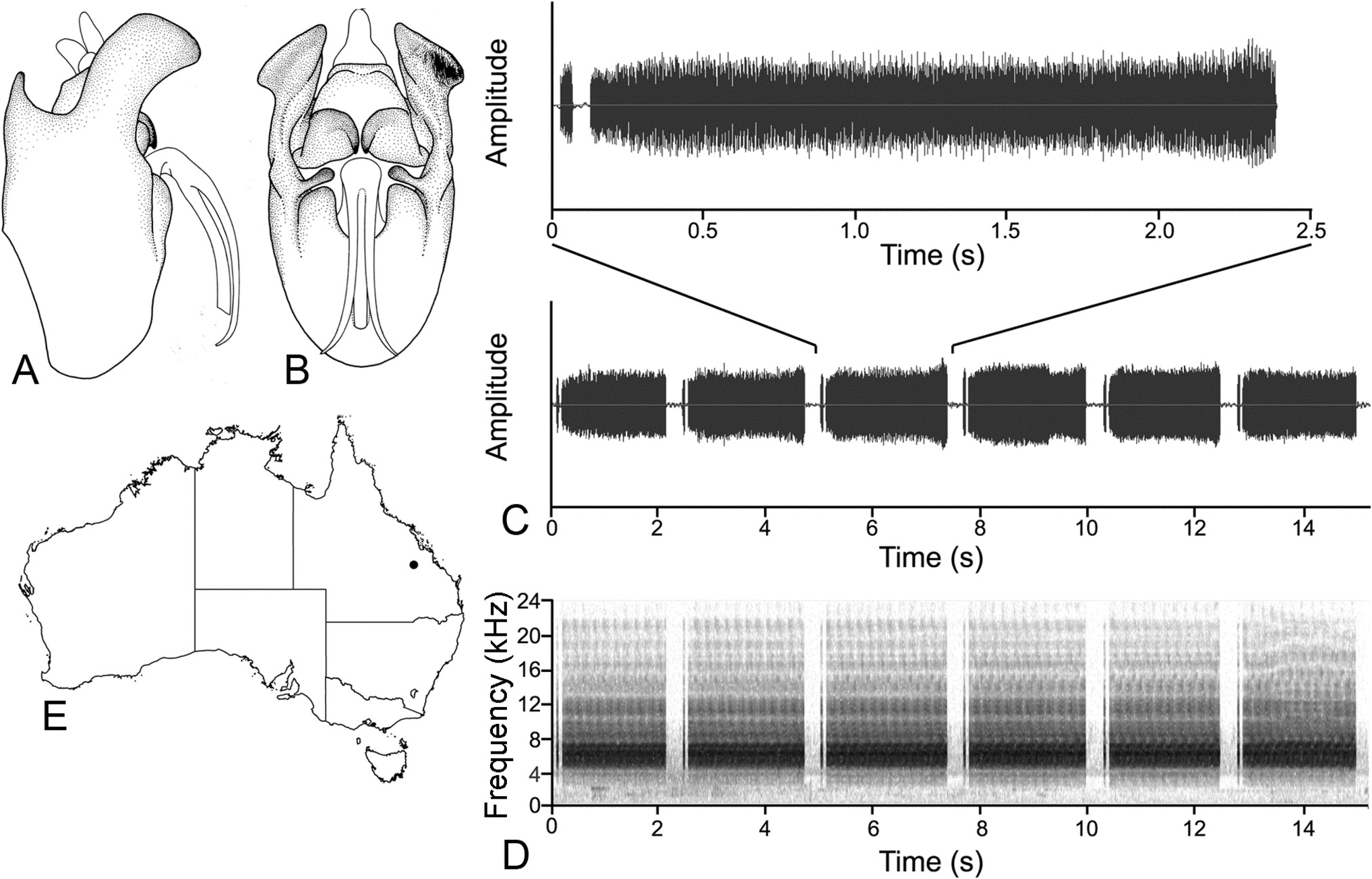