Eyes ( Fig. 4A, B View FIGURE 4 ) triangular, cornea unpigmented, extending to the proximal third of basal segment of antennular peduncle.

Live colouration. The specimens are a uniform milky white to beige ( Fig. 2A View FIGURE 2 ). Eggs in females white to yellow.

Etymology. The new species was named after Socotra Island ( Yemen), its type locality.

There has been no correlation found of these types with either sex or size of the specimens ( Table 2; Fig. 11 View FIGURE 11 ). Animals with both slender and robust chelae were found in Erher Cave in stagnant pool and waterfall localities, as well as in Fosreher Cave and Ghiniba Cave. Other features are rather constant. The number of mobile spines at the uropodal diaeresis is always one. The position of the proximal dorsal pair of spines on the telson is between 0.5 and 0.6 of the telson length, that of the distal pair 0.7–0.8. Only few specimens have the distal pair somewhat closer to the distal margin ( Fig. 9A View FIGURE 9 ).

All female specimens have short forward-directing spinules placed on the flexor margins of the dactyli of the third, fourth and fifth pereiopods and short spines on the distoventral margin of the propodi ( Fig. 10D, F View FIGURE 10 ). Most males (n=20) have long spinules placed perpendicular on the corpus and long spines on the distoventral margin of the propodi as well. The other males (eight) have these features as in the females. These morphological differences in males are not correlated with size nor with location. The length of the appendix masculina ranges from 0.5–1.5 times the length of the appendix interna. There is no relation between the size of the appendix masculina with that of the appendix interna and the variation in dactylar morphology in males.

Ecology. Subterranean freshwater and slight brackish environments in limestone karst. In Erher, populations were found in three separate locations in the cave: large densities were found in temporary shallow stagnant muddy pools near the entrance that were created by overflow during the rainy seasons. The pools near the entrance receive some light from the cave entrance, yet animals remained unpigmented, and bright white. Lower densities in the clear, shallow permanent water were found in Erher Cave at the base of the large waterfall (creating a strong flow; this can be seen as riverine) and only few animals in the clear, deep permanent lake (end basin) at the end of the cave (no flow). The water in Erher derives from the Momi plateau above and is fresh, measuring between 400–600 µS/cm (256–384 ppm) and a pH of 7.6–7.8. The waterfall is used as local water source ( De Geest & Van Damme 2006), transporting water through tubes to the nearby village (Irisseyl). In Ghiniba Cave only two specimens were found in flowing water in the large and clear permanent cave river at the end of the dry section of the cave in the main gallery. The river in Ghiniba contains freshwater of the same low conductivity as in Erher. Conductivity of the water in Fosreher Cave was not measured, yet this can be considered as freshwater as well and was used as drinking water by the team (not brackish in taste). Only few animals (eight) were found in the latter locality, which like Ghiniba functions as a sump for the runoff from the surrounding plateau. Water in the coastal well (near Qadub) was slightly brackish (4200 µS/cm, corresponding to ca. 2690 ppm) and near neutral pH (7.5), here only one specimen was found. Reproductive biology not studied, ovigerous females have large egg clutches containing many white to bright yellow eggs.

The recently described genus from Madagascar, Monsamnis Richard, De Grave & Clark, 2012 also has only a single spine in the uropodal diaeresis ( Richard et al. 2012), like the new species of Halocaridinides from Socotra. However, in Monsamnis all pereipods have exopods (fifth reduced), whereas in Halocaridinides exopods are absent on all pereiopods. Monsamnis is known from freshwater mountain streams on Madagascar. 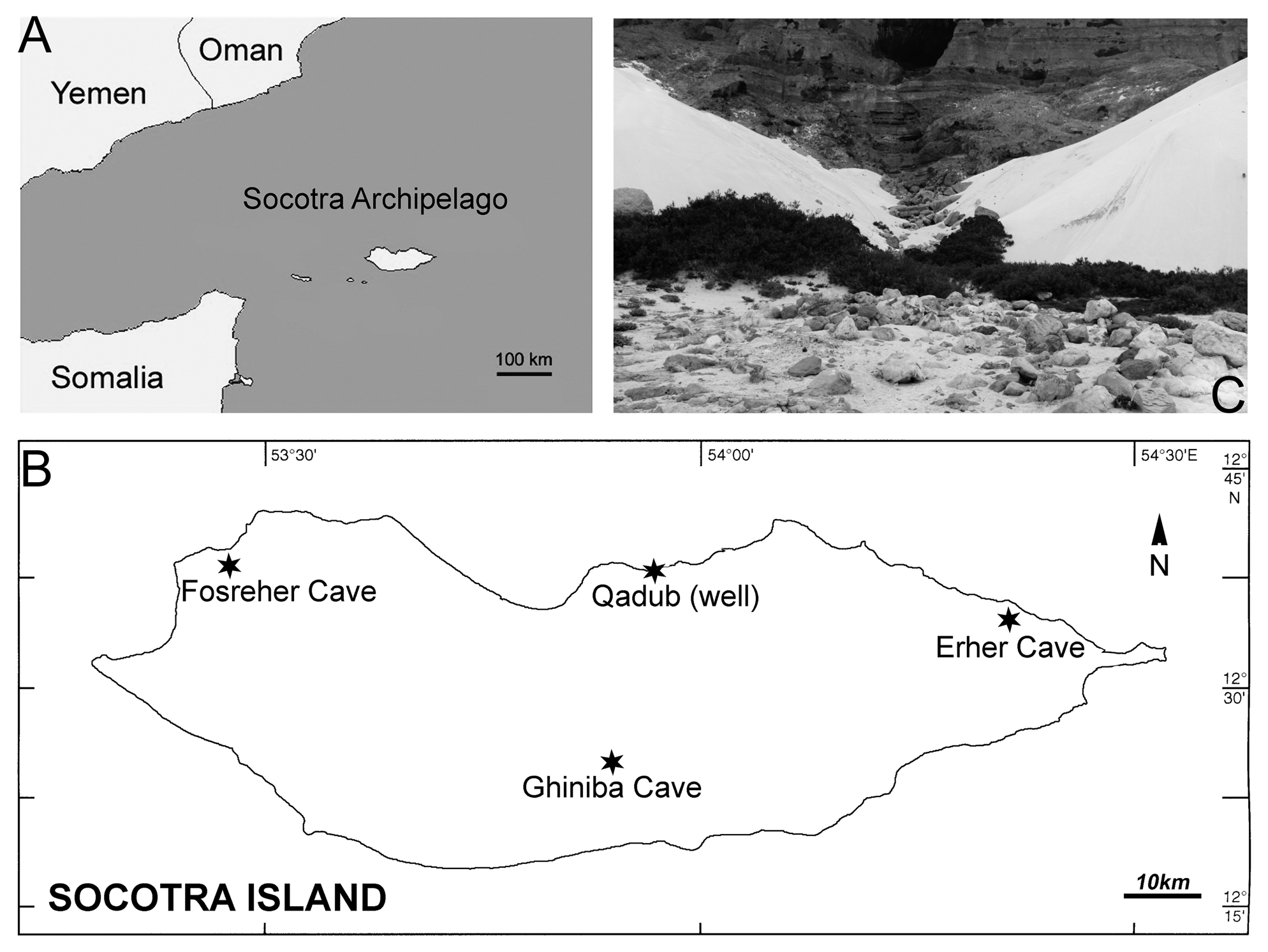 FIGURE 1. The Socotra Archipelago relative to South Arabia and the Horn of Africa (A), localities where Halocaridines socotraensis sp. nov. was collected (B; stars) and view of Erher Cave, the type locality (C). 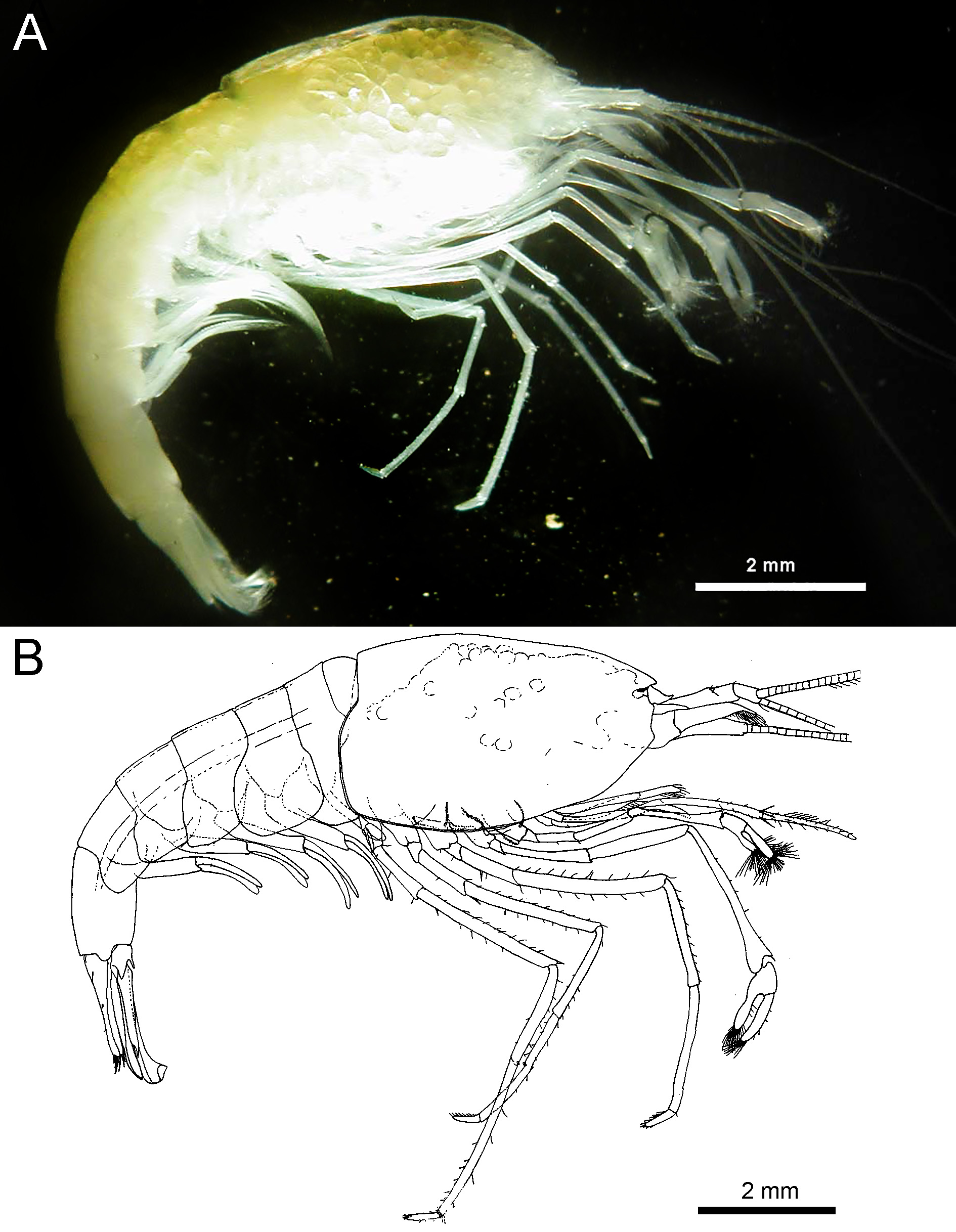 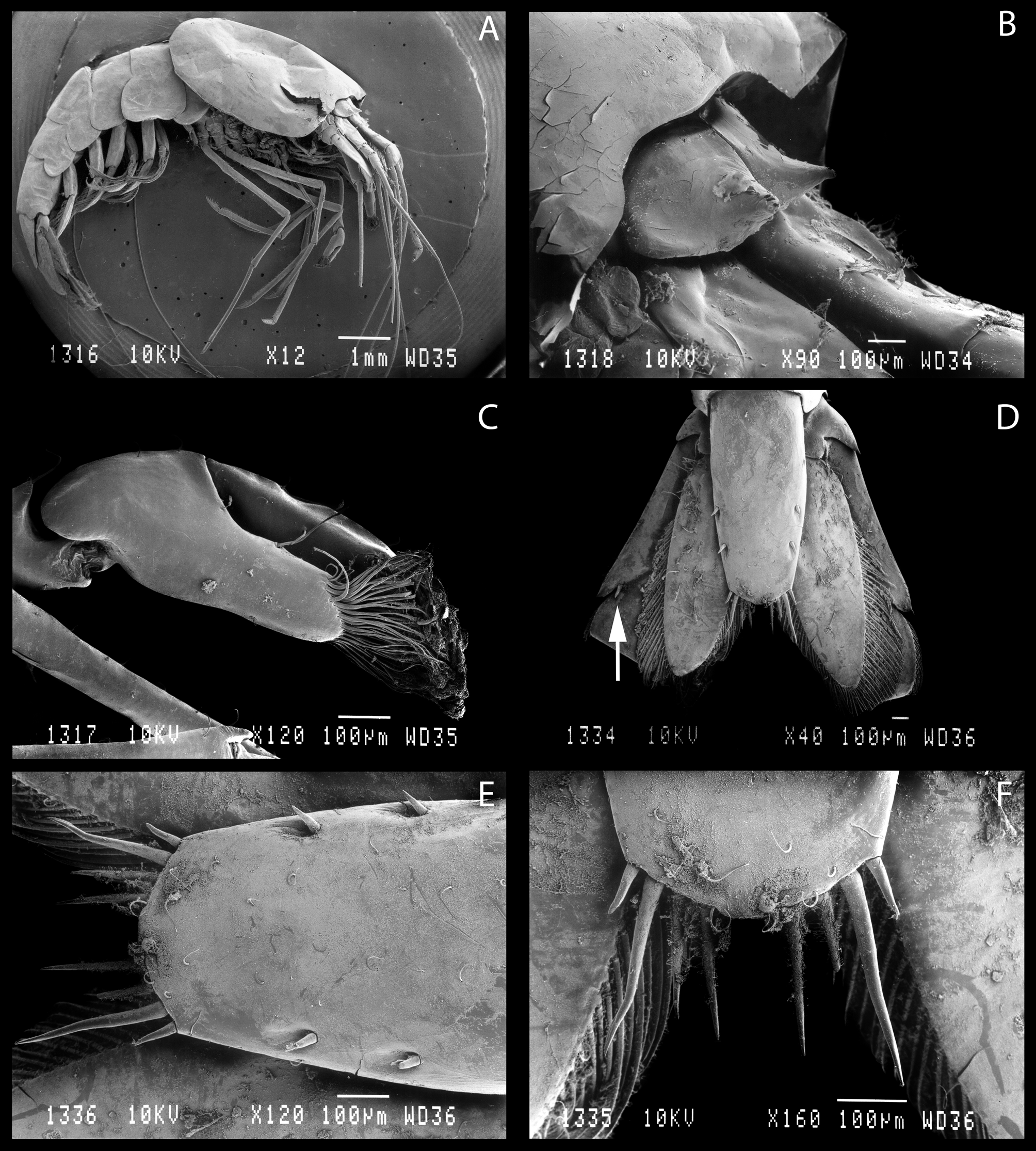