HOLOTYPE: FMNH 55483 View Materials , an adult male skin and skull, collected by José Schunke, 15 August 1946. The tail of the holotype is slightly bent at midpoint.

ETYMOLOGY: From the Latin albus (“white”), and venter (“belly”). The only Toromys   with white underparts.

DESCRIPTION: Dorsum coarsely grizzled brown-agouti, lined with black; back posterior to shoulders, flanks, ventral tail base, and hind limbs, are tinged rusty reddish; forequarters and head tinged more ochraceous yellow lined with black; extreme tip of muzzle dull rusty in some specimens, including the holotype ( fig. 16 View FIG ), but barely so in others ( fig. 13A View FIG ). Dorsal hairs a mixture of several widths of wider and narrower bristlelike aristiforms, pale gray basally, banded black or dark brown, then buff or rusty, with dusky, buff, or rusty tips that are drawn out into long hairlike processes ( fig. 4F View FIG ). Hind feet rusty buff above, toes whitish; forefeet gray above. Claws unpigmented and small for the genus, silvery ungual tufts reach beyond their tips. Dorsal hair extends about 3.5 cm onto the tail base, colored like the back above, dull, unbanded rusty below. Posterior to the extension of body hair onto the tail base, tail hair is monocolor black to brown dorsally, beige to white ventrally, over pigmented skin. Hairs longest at the dorsal base and midline, producing an indistinct keel to halfway down the tail, black or brown for about basal one-third, paling and diminishing gradually in length. Length of the tail hair varies between syntopic individuals, from distinctly to barely elongated. The longest hairs near the tail base reach across about five scale rows. Most tail hairs emerge from the scales in pairs, one longer and robust, the other shorter and finer. Tail scales squarish to hexagonal, about as long as wide, in uneven rows on dried skins. Underparts, including the sparsely haired inner limbs, white or slightly tinged yellowish or buff, with a grayish to gray-brown lateral band at the junction with the dorsal pelage. Throat and lower neck crossed by a faint buffy collar. One specimen, LSUMZ 8904, has ventral hairs with dusky subterminal bands lending a brownish tinge to the abdomen and with pale brownish bands across the lower throat and abdomen between the flanks, but the inner limbs are monocolored dirty white. Ear pinnae small, thinly haired inside with buffy hairs, with whitish or pale gray hairs behind; a few inconspicuous salient hairs extend from the rims. Mystacial vibrissae robust and black, the longest reach to the shoulder when laid back; genal and supercilliary vibrissae fine and inconspicuous; antebrachial vibrissae present. A female has two pairs of used lateral mammae, one above the flank and the other about midway between fore- and hind limbs and about 1.5 cm into the dorsal pelage field. The dried hindfeet appear unpigmented and relatively narrower across the base of the digits than are those of T. rhipidurus   ; they have small tubercles around and between the plantar pads, and collars around the digital pads, which appear large, but details of the feet are unclear. Forefeet with abundant small tubercles on the midline of the palm. Cranium in dorsal view with a long, slender braincase and a short rostrum; nasal bones pinched medially and flared laterally posteriorly and slightly anteriorly ( fig. 9C View FIG ). Parietal-interparietal suture nearly straight or bowed posteriorly; interparietal wide dorsally across the whole width of the posterior cranium. Incisive foramina slightly ovoid, widest anteriorly, with the maxillary and premaxillary portions of the septum broadly fused, and with a strong medial ridge leading onto the palate to between the premolar roots ( figs. 7C View FIG , 17C View FIG ). Supraorbital ridges beaded posteriorly, moderately expanded into shelves. Jugals dorsoventrally narrow, with jugal fossa narrow, and a slender insertion onto the maxillary. Incisors are white to pale yellow. Occlusal pattern as for the genus, but lophs and flexi of more uneven widths and angles, and M1 and M2 mures nearly at center of teeth. Unworn upper cheek teeth divided in half by the mesoflexus into two joined pairs of lophs ( fig. 12A, B View FIG ).

LOCALITIES AND NATURAL HISTORY: The known specimens are from two localities (fig. 1). The type locality, Yarinacocha, is a left-bank oxbow lake of the Río Ucayali, a widely meandering, whitewater river, at about 150 m. Some of the Yarinacocha specimens were collected by J.M. Schunke in 1946, and the others were collected in the 1960s by expeditions from Louisiana State University. The second locality, “Suaya,” is the origin of two specimens collected in 1926 by J.M. Schunke. Vaurie (1972) spelled this locality as “Suayo” and provided approximate coordinates of 07°18′ S; 74°55′ W, which is downstream and east of Contamana on the right bank of the Río Ucayali. We here emend this locality to Lagos del Suhaya, 7.46° S; 75.18° W; 160 m, left bank of the Río Ucayali, about 20 km WSW of Contamana. These are a group of lakes in a landscape depression that borders the meander zone of the river, and are likely accessible by boat during high water. This locality is on current maps, and is plausible because Schunke collected 10 days later at “Pampa Hermosa,” a currently occupied and mapped village about 35 km downriver (north) of Contamana. Moreover, it is pronounced the same way as the original was written on the specimen label. None of the specimens are accompanied by habitat notes, but A.L. Gardner, collector of LSUMZ 14409 and LSUMZ 14408 (a Makalata   ), recalled in person to L.H.E. that both specimens were shot at night from the forest canopy, along the raised bank bordering a narrow channel leading into the west side of Yarinacocha lake, on the northern outskirts of Pucallpa. The forest was disturbed, dense secondary regrowth, with largediameter lianas. The two species were taken in the same stretch of trail. The region around Pucallpa is among the most heavily populated and deforested of the Peruvian Amazon, and now is crisscrossed by roads, plantations, and reservoir dams, and scarred from recent burns (Google Earth, 2017). Some gallery forests remain, likely because they are flood prone, and T. albiventris   could be present in these. However, the right (east) bank of the Ucayali remains nearly entirely forested. Yarinacocha is a well-known ornithological locality from many LSUMZ expeditions ( Stephens and Traylor, 1983).

REMARKS: Sanborn (1949) identified the 1946 FMNH specimens as Toromys   (“ Echimys   ”) rhipidurus   , but noted them as enigmatic, remarking correctly that the tail hair differed among specimens of the series. The two 1926 AMNH specimens are browner, with red-brown tail hairs paler than on those collected in 1946, and we suspect the older specimens have bleached to more orange hues. One collected in 1968 (LSUMZ 14409) has black dorsal tail hairs, while the 1962 specimen (LSUMZ 8904) has red-brown hairs that are scarcely elongated, but that form a slight dorsal keel along the tail. LSUMZ 8904, taken 31 July 1962, was multiparous and pregnant with a single, 30 mm embryo. FIG. 13. Head colors of specimens. A, Toromys, sp. nov. LSUMZ 8904; B, Toromys rhipidurus FMNH 87248; C, Makalata cf. macrura LSUMZ 14408. Specimens in panels A and C were collected at Yarinacocha (type locality of Toromys, sp. nov.). The tip of the muzzle is variably buff to rusty in Toromys sp. nov. (fig. 16), while Makalata from some distant populations are not as bright rusty as A. On Makalata, the rust color extends well behind the eye above and below. Also note the coarser, more robust vibrissae of both Toromys, the more developed fringe of salient wispy hair on rim of the Makalata ear (also typical of Pattonomys spp.), and the less robust claws of T.sp. nov. compared to those of T. rhipidurus. 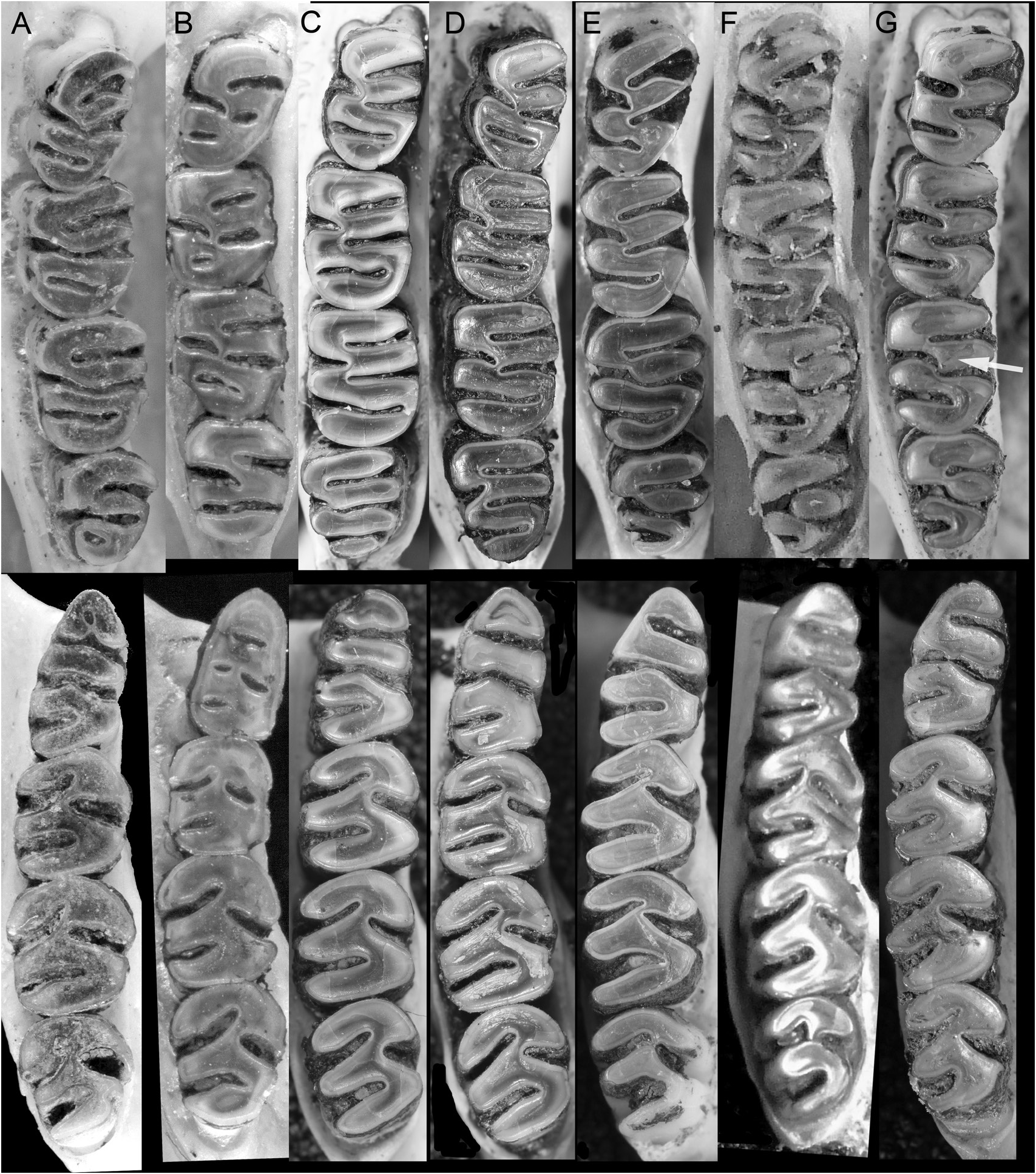