Measurements of illustrated specimens (in mm)

Holotype: A female, with soft parts dissected in glycerine in a sealed slide and with valves stored dry in a micropaleontological slide ( MZUSP 40403 View Materials ).

This species was named in honour of Prof. Dr Sidinei Magela Thomaz (State University of Maringá, Nupélia/PEA, Brazil) for his very significant contributions to the ecology and limnology of Brazilian inland waters and their macrophytes. Prof Sidinei “Nei” Thomaz has been most helpful in establishing ostracod studies at Nupelia and is a close personal friend of KM.

RVi ( Fig. 5B View FIGURE 5 ) high and with dorsal protuberance; with calcified inner lamella as in LVi, anteriorly and posteriorly with selvage slightly inwardly displaced, greatest height situated slightly behind the middle because of dorsal protuberance.

A2 ( Figs. 6B, C View FIGURE 6 ) with protopodite, exopodite and three-segmented endopodite. Protopodite with two ventral setae; and one long ventro-distal seta. Exopodite reduced to a small plate, with one long and two unequal short setae. First endopodal segment with one ventral aesthetasc Y, one long apical seta (reaching the tip of the second endopodal segment), one group of five long and one short swimming setae (the five long setae almost reaching tips of apical claws; the shortest almost reaching the middle of second endopodal segment). Second endopodal segment undivided, with two unequal dorsal setae and a group of four long and unequal ventral setae; apically with three claws, G1 longer, G2 shorter, and G3 slightly shorter than G1, three equally long setae (z1, z2 and z3) and a short aesthetasc y2 ( Fig. 6B View FIGURE 6 ). Terminal segment ( Fig. 6B View FIGURE 6 ) with two claws (one long GM; one short, Gm), an aesthetasc y3 with an accompanying seta (seta longer than aesthetasc), fused over a short distance only, and a fine g-seta, the latter shorter than the accompanying seta and aesthetasc y3.

First segment of Md palp ( Fig. 6 View FIGURE 6 D—chaetotaxy not completely shown) with one long (reaching beyond tip of ss-seta) and smooth α-seta. Second segment ventrally with one long, stout and distally hirsute ss-seta. Penultimate segment laterally with one cone-shaped, stout and distally hirsute γ-seta. Terminal segment sub-rectangular, ca. 1.5x as long as basal width. Md coxa (not illustrated) as typical of the family: elongated with an apical row of strong teeth of variable size, interspaced with some setae.

T3 ( Fig. 7 View FIGURE 7 B—chaetotaxy not completely shown) with three segments. First segment with three long setae (d1, d2, dp). Second segment, longer than wide, with one subapical seta (e). Third segment, also longer than wide, with one lateral, hirsute seta (f); distal part of the third segment fused with fourth segment into a modified pincer, with one apical comb-like seta (h2), one small recurved seta, with 1/5 of the length of the comb-like seta and one longer and distally hirsute seta (h3). Small tooth-like structures present at the base of the comb-like seta (arrowed in Figure 7B View FIGURE 7 ).

Strandesia thomazi   nov. sp. can be distinguished from most other Strandesia   species by the rounded dorsal protuberance on the RV and the blunt beak on the anterior end of the carapace in dorsal view. This species is most similar in lateral view to the African S. elatior (Vávra, 1897)   , but the carapace in this latter species has no anterior beak in dorsal view. In other species of the genus with a dorsal protuberance on the RV, this structure has a different shape: it has a straight margin and a posterior spine in the African type species of the genus, S. mercatorum   . Of other such species, S. bicuspis ( Claus, 1892)   has a posteriorly pointed dorsal protuberance, the dorsal protuberance is semirectangular and larger in S. feuerborni Klie, 1932   , small and sub-quadrate in S. pistrix Broodbakker, 1983   , larger in S. evae Gauthier, 1951   and smaller and more symmetrically rounded in the S. cyprinotoides Klie, 1938   . Strandesia thomazi   nov. sp. differs from Strandesia galeati   nov. sp. in that it is generally higher and less elongated (especially the LV) and that the dorsal protuberance is situated more posteriorly. 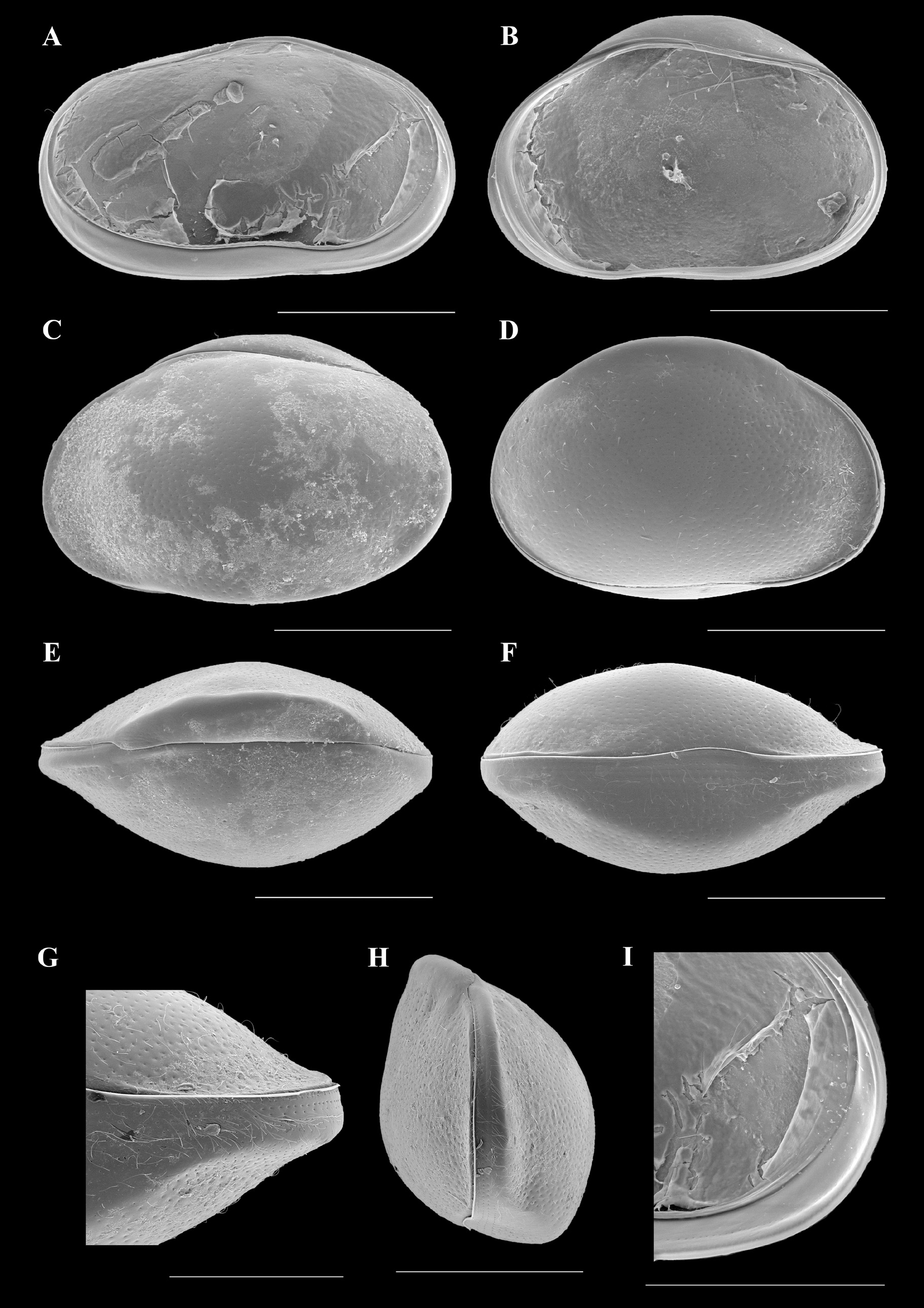