Stage association. Originally, Th. lepidus was described as male imago from Chiriqui province in Panama; till recently, its larva was unknown. The larval description given above, is nit based on a reared specimen, but on a male larva ready to molt to subimago, and a female last instar larva, collected close to the type locality. The male subimago, extracted from the larval exuviae, is attributed to Th. lepidus based on its coloration of abdomen and legs. Protoptera of female larva demonstrate hypodermal coloration of costal and subcostal fields ( Fig. 591 View FIGURES 591–602 ) and presence of well developed costal cross veins proximad of bulla, that agrees with description of imago of Th. lepidus .

Abdominal coloration of male imago was described as following: «Abdominal segments 2–6 transparent whitish, each with the tip and an oblique stripe on each side recurrent therefrom, fuscescent; segments 7–10 rich brown-ochre, lighter or pale yellowish ochreous towards the sides and beneath, and narrowly edged with black at their distal dorsal border» ( Eaton 1884). Fuscescent, brown and black markings reported in this description, represent hypodermal pigmentation. The examined specimen, besides this hypodermal pigments, bears subimaginal cuticle, which has brown color (except small paired sigilla) and is covered with dark brown microtrichiae ( Fig. 612 View FIGURES 603–612 ), that makes the whole abdomen brown.Position of darker brown hypodermal markings agrees with the description of imaginal abdomen( Fig.611 View FIGURES 603–612 ).

Leg coloration of the male imago was described as follows: «Fore leg in opaque view, with the femur, tibia, and joints 3 and 4 of the tarsus pitch-brown, the remainder of the tarsus dull light yellowish ochreous, the tip of the tibia slightly tinged with pitch-black. Hinder legs in opaque view, with the femur light reddish brown or rufo-piceous, the tibia and tarsus opaque amber-yellowish» ( Eaton 1884). In contrast to many other species, all femora are entirely brown, fore tibiae have the same color, while middle and hind tibiae are much lighter. This hypodermal coloration is clearly visible through larval and subimaginal cuticles ( Figs 597–598 View FIGURES 591–602 ). This specimen differs from the Eaton’s description only by coloration of fore tarsus, which has all joints equally dark.

Relationship. Besides Th. lepidus, Eaton described from the same place (province of Chiriqui in Panama) male and female imagines of another species, Thraulodes valens ( Eaton 1892) . Kimmins (1934) described and figured genitalia of both these species. He characterized the penis of Th. lepidus as following: «Lobes of the penis divergent, their apices rounded and turned more strongly outwards, and each bearing two spines. One, directed inwards and arising from the upper surface, is long and slender, and the other, on the outer lateral margin, is very small and directed basally» ( Kimmins 1934: 343-344, fig. 7), and penis of the lectotype of Th. valens as following: «Lobes of the penis divergent, apices rounded and furnished each with two spines; one, the longer, directed inwards, and the other basally» ( Kimmins 1934: 345, fig. 8). Thus, both species have a pair spines located on lateral projections of penis and directed basally. By this feature these two species differ from all other Thraulodes , whose lateral projections of penis are smooth and have no points. Traver and Edmunds (1967) gave figures of genitalia of Th. lepidus and Th. valens redrawn from the Kimmins’s paper ( Traver & Edmunds 1967: figs 27, 64), but ignored this feature and proposed synonymy between Th. lepidus and Th. pedregoso Traver 1946 , whose penis does not have these points ( Traver 1946: fig. 19; Traver & Edmunds 1967: fig. 58). Probably, Th. lepidus and Th. valens are closely related. According to the original descriptions, they have similar leg coloration (all femora mostly brown, fore tibia brown, middle and hind tibia yellowish), but differ in coloration of abdomen: in contrast to Th. lepidus , in Th. valens «dorsum of abdomen light raw umber-brown» ( Eaton 1892: 9).

Former synonymy. Mariano, Flowers and Froehlich (2011) proposed synonymy of Th. cryptodrylus and Th. lepidus and argued this in a single sentence: «After analyzing the holotype and paratypes of T. lepidus and T. cryptodrilus , we conclude that the species described by Nieto and Domínguez (2001) based on material from Mexico collected in 1981 is the same as T. lepidus , and is proposed here as a synonym». They did not specify, holotype and paratypes of which species did they examined and did not give original figures of these type specimens. According to the published figures and descriptions, these two species well differ one from another by genital structure and by coloration of legs and abdomen. The species name Th. cryptodrylus Nieto & Dominguez 2001 should be regarded as valid.

Crumpled subimaginal genitalia, extracted from larva ( Figs 606–607 View FIGURES 603–612 ) do not allow to reveal all features of the imaginal genital structure; however, they allow to assume correspondence with the genitalia described for Th. lepidus ( Kimmins 1934: fig. 7), but do not allow to assume correspondence with the genital of Th. cryptodrylus , whose spears are much shorter and dorsal projection of styliger much wider apically ( Nieto & Dominguez 2001: figs 6–8). In Th. cryptodrylus definitive penis is as short as the dorsal extension of styliger; in my specimen it has similar length in pressed and crumpled condition, so in definitive condition it must be as long as described for Th. lepidus . Telopenes of the subimaginal penis have definitive length; they are as long as in imago if Th. lepidus , that is much longer than in imago of Th. cryptodrylus . 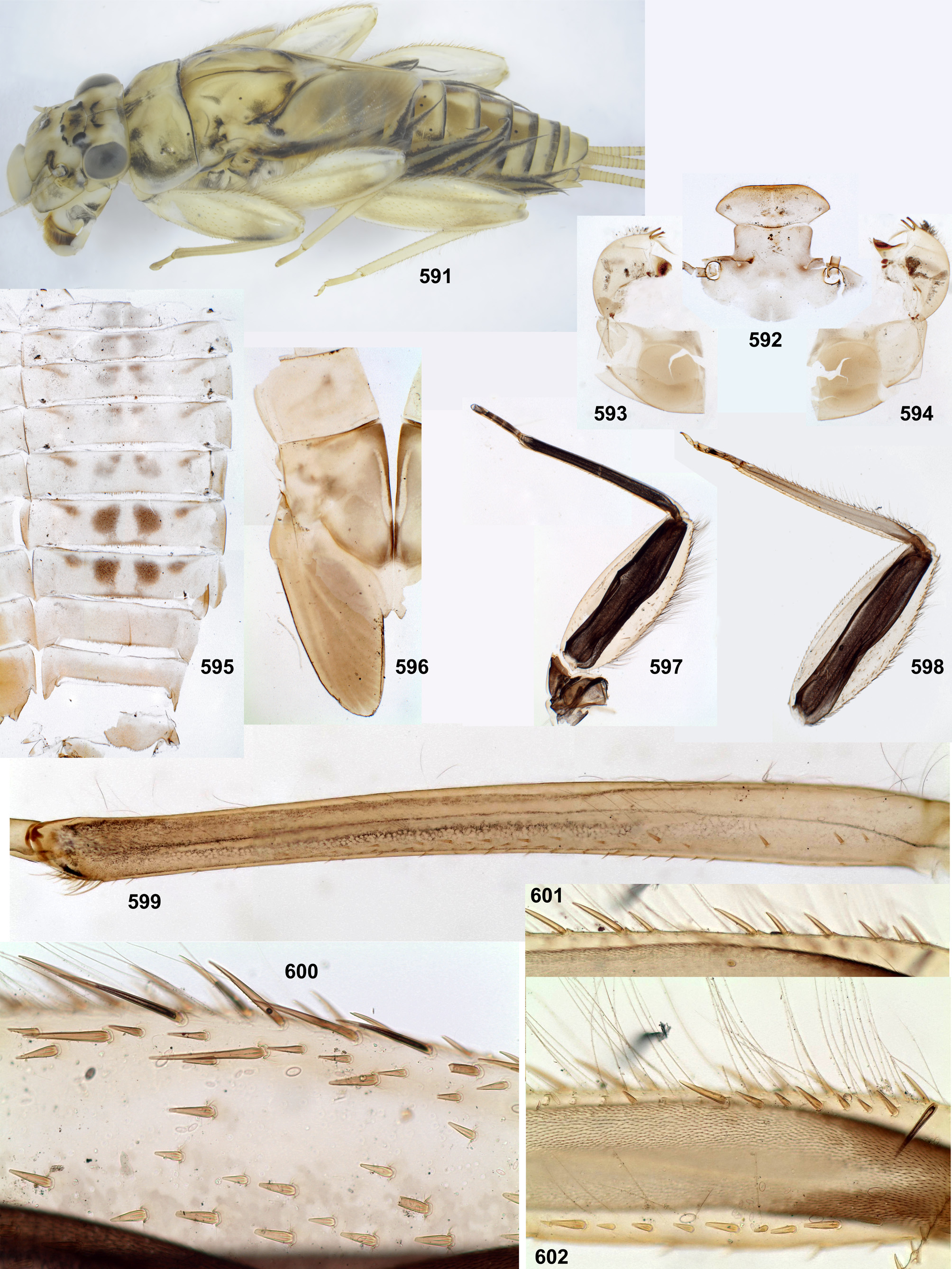 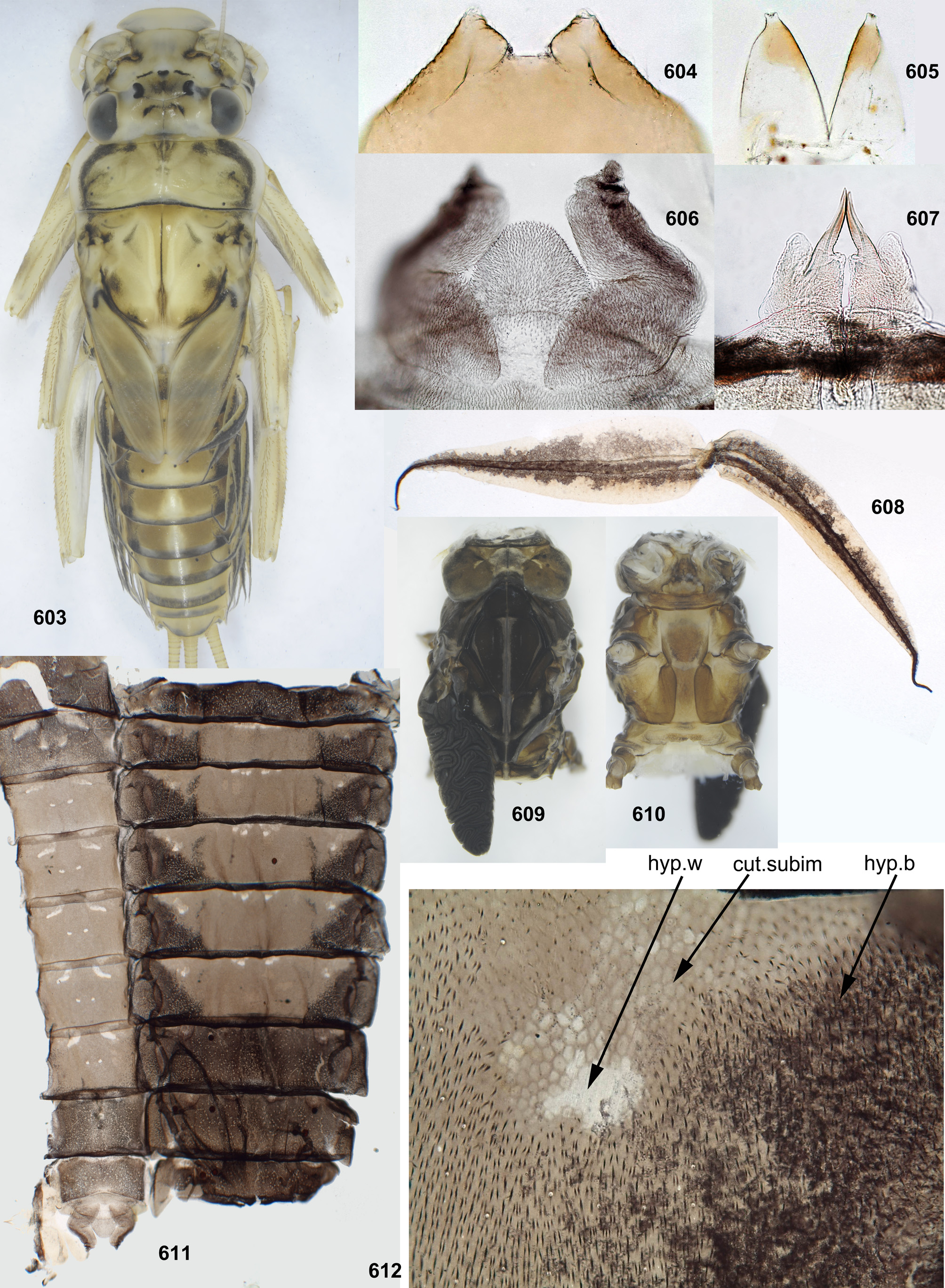 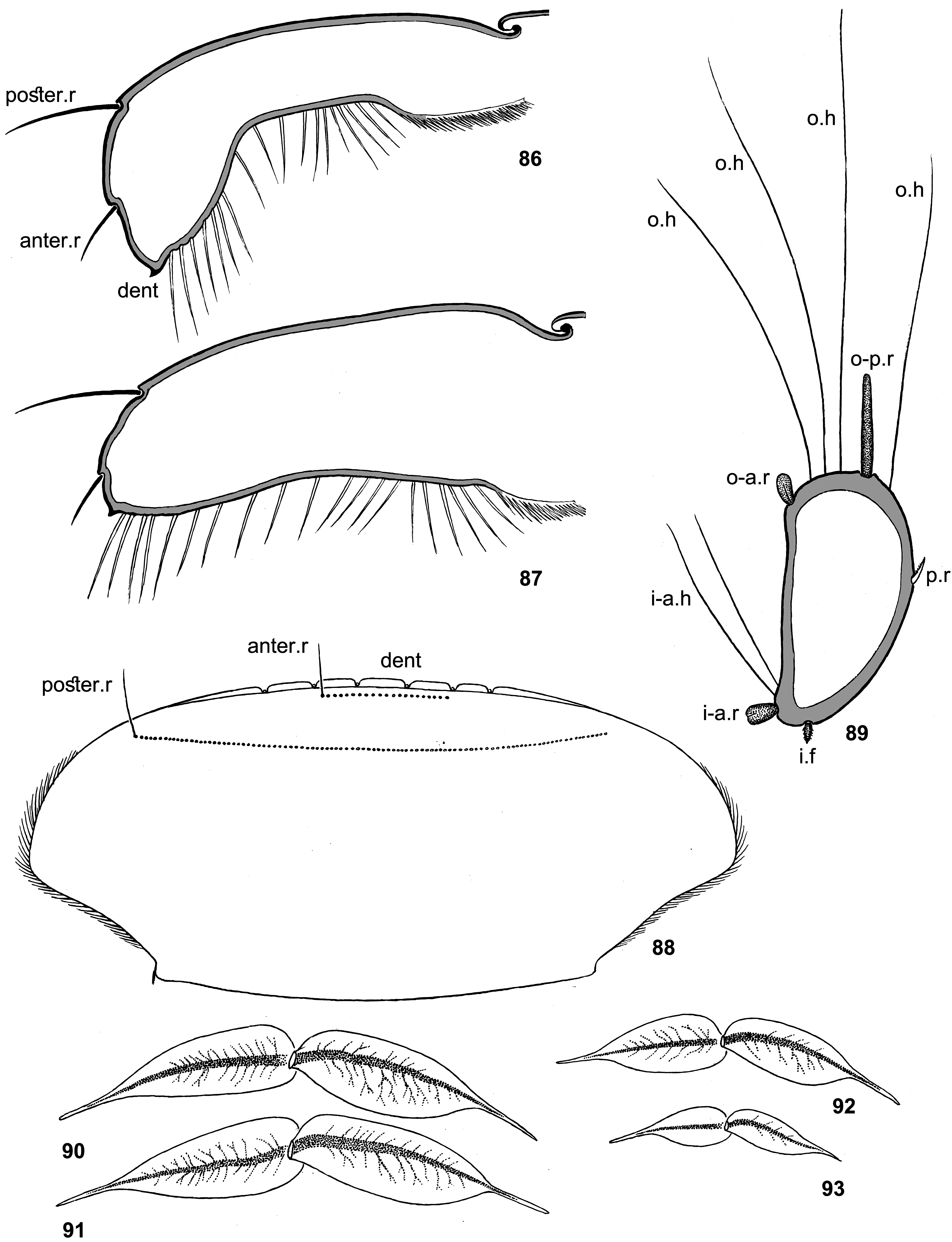