Distribution, ecology and conservation status. – Homalium ranomafanicum is native to mid-elevation southeastern humid forest. The type collection, made over two decades ago, is from the national park of Ranomafana. No further collections have been seen, though thousands of specimens have been collected from Ranomafana. It is thus likely that this represents a very rare species. However, given the lack of knowledge regarding this species and the fact that its known habitat is relatively well protected, a preliminary conservation status assessment of “Data Deficient” [DD] seems most conservative.

Notes. – The type collection of H. ranomafanicum is the only known collection of its kind from the very well-collected site of Ranomafana National Park. It is notable for having broadly obovate leaves, long panicles with well-developed branches, and small 4-merous flowers with short pedicels, very short sparsely pubescent sepals, and densely pubescent sepal glands. Homalium ranomafanicum is likely to be closely related to H. maringitra and the newly described H. dorrii , which share small flowers with mostly sparsely pubescent sepals and densely pubescent sepal glands. It seems most similar to H. maringitra , which is known from mid-elevation humid forests much farther north, and which similarly has petals almost twice as long as the sepals. The leaves of H. maringitra are usually smaller, or at least narrower, and mostly elliptical rather than obovate; its leaf margins are toothed or wavy with multiple glands, its inflorescences racemose or racemiform, and its pedicels and sepals frequently longer than those of H. ranomafanicum . Homalium dorrii has narrower leaves and longer sepals, so that the petals only modestly exceed the sepals (see Fig. 2 View Fig. 2 A and 2E for a comparison). The only species of sect. Eumyriantheia previously known from southeastern midelevation humid forest is H. oppositifolium , which differs from H. ranomafanicum in numerous characters (e.g., its leaves are mostly elliptical, inflorescences racemose, sepals 5-6 in number and longer both absolutely and relative to the petals, and abaxial surfaces of the sepals and petals densely pubescent). 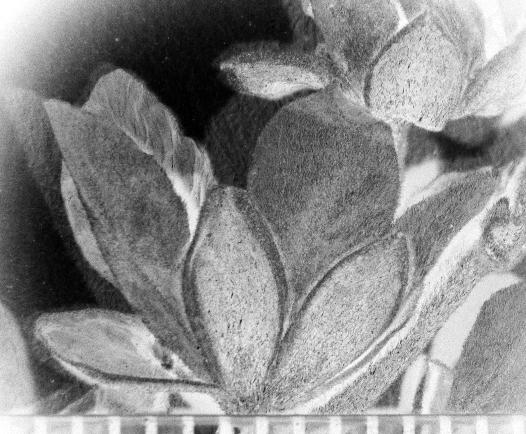