The type of T. latifolia   was placed by EGGLI (1997) within the southeastern T. dauphinensis   , which differs in having leaves without dark spots, visible secondary venation, or mucronulate apices; smaller and unequal sepals; and petals that are whitish rather than pink. Talinella latifolia   also closely resembles the northern species T. pachypoda   , with which it may share unusual pink corollas, and T. tsitondroinensis   , but may be distinguished from these by leaf morphology. The leaves of T. pachypoda   are usually symmetrical and slightly narrower than those of T. latifolia   ; the margins are often minutely papillate, the upper surface is not dark-spotted, and the apex is less variable, frequently apiculate but not mucronulate. The petals of T. pachypoda   are <3.5 mm long, and the bracts are sometimes> 1 mm long and narrowly triangular; the immature fruit has an apical beak, and the mature fruit may dehisce apically. Talinella tsitondroinensis   has narrower leaves than T. latifolia   , usually with rounded apices; narrower bracts (which in both species are sometimes reduced to scales or ridges); and larger stigma branches (up to 3 mm, sometimes branching). Petal number varies within a single individual in both species (4-5 in T. latifolia   and (2-) 5 in T. tsitondroinensis   ). These two species are otherwise quite similar. The holotype of T. latifolia   has small anthers on a few staminodes, but is probably functionally female; related species ( T. pachypoda   , T. dauphinensis   ) are apparently dioecious.

DISTRIBUTION. — Talinella latifolia   is known from three collections in two widely separated areas ( Fig. 6 View FIG ). The type was collected in central Madagascar, near the Mania River on granite at about 700 m. If the label data are accurate, the location of the collection would be limited to the portion of the Mania east of the juncture with the Ankotrofotsy or Tsiribihina River, but west of about 046°30’E, as the elevation of the river basin farther east exceeds 700 m. RAZAFIMAN- DIMBISON & ANDRIANANTOANINA collected material of both T. pachypoda   and T. latifolia   under the same number at Ankarana, indicating that these species sometimes share similar habitats and that the potential habitat of T. latifolia   may be rather diverse, since this collection was probably on limestone rather than granite. A photograph of another specimen from the extreme north (Ramananjanahary et al. 9) also appears to represent T. latifolia   ; the petals are reported to be white rather than pink.

CONSERVATION STATUS. — Provisional IUCN Red List Category: Vulnerable (VU D2). As only three collections of T. latifolia   have been seen, population data are inadequate to draw firm conclusions. The original range may have been large, given the considerable distance between the Mania River and the northern habitat, but much of the original vegetation between these locations h a s b e e n d e s t roye d. Re m a i n i n g ve g e t a t i o n patches around central population centers have long been accessible to collectors, so the absence of other collections suggests that the species may be sparsely distributed. Talinella latifolia   also seems to be a rare plant within its northern range: RATOVOSON (pers. comm.) reports seeing only two individuals in 11 days of collection near Montagne des Français. 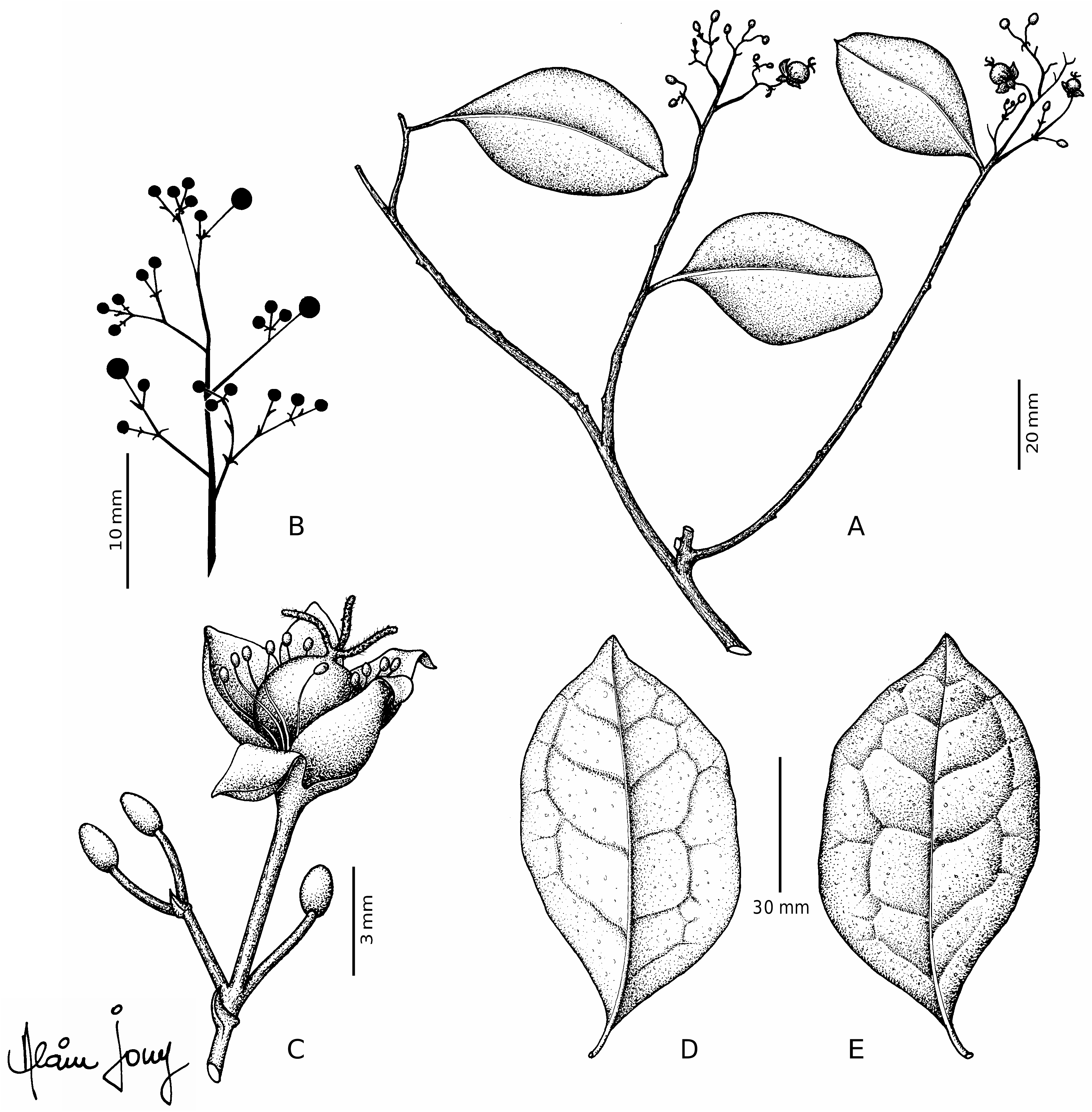