Etymology. Conescharellina cookae   n. sp. honours bryozoologist Patricia L. Cook (Cookie), in recognition of her many studies on conescharellinids and other bryozoans of similar colony form.

Description. Colony more or less regularly conical, up to 6.2 mm long and 5.0 mm widest diameter. Zooids in about half to two-thirds of colony length with open orifices, the remainder occluded by calcification; orifices arranged roughly quincuncially such as not to be in regular longitudinal or diagonal rows. The narrow apical end rounded, with several dense clusters of small irregular pores, each cluster marking the origination of kenozooidal rhizoids in life. Between and around the rhizoid pores are scattered tiny areolar-septular pores and small circular avicularia   , each with a crossbar with ligula. Antapical end of colony roughly planar or slightly convex, generally more or less circular in overall outline or somewhat oval owing to lateral flattening; with radial convexities associated with each autozooid, the surface calcification perforated with abundant areolar-septular pores and scattered tiny round avicularia   . Edge of antapical surface irregular owing to projecting zooidal peristomes, each with a single median umbo with a tiny apical avicularium like those elsewhere over the colony and typically 1–3 additional such avicularia   embedded in the rim; inner face of peristome beneath apical avicularium flattened or with a short descending ridge. Primary orifice concealed at bottom of peristome; transversely oval with a nearly straight, broad, proximal margin; operculum flat with a thin sclerite around its entire margin to the position of the small proximolateral condyles of the orifice; an occlusor muscle insertion on each side distolaterally. Relatively large circular avicularia   present, the crossbar with columella, rare or occasional depending on colony. Ovicell visible as a bulge on the apical side of the orifice, the ectooecium mostly concealed by secondary calcification like that of the zooidal surface, but the proximal part of it visible to the inside of the peristomial rim that crosses it, its surface smooth, opening just above the primary orifice; generally a pair of small round avicularia   in that part of the peristome that crosses the ovicell.

Remarks. This and the following species co-occur in the same assemblages, although, judging from our samples, C. cookae   is four times more abundant that Conescharellina bocki   n. sp. The two species are easy to tell apart ― C. bocki   has longer, more tubular peristomes and the antapical end is concave owing to the way the autozooids are budded. Overall, zooidal peristomes are less symmetrical and ovicells less obvious in C. bocki   . 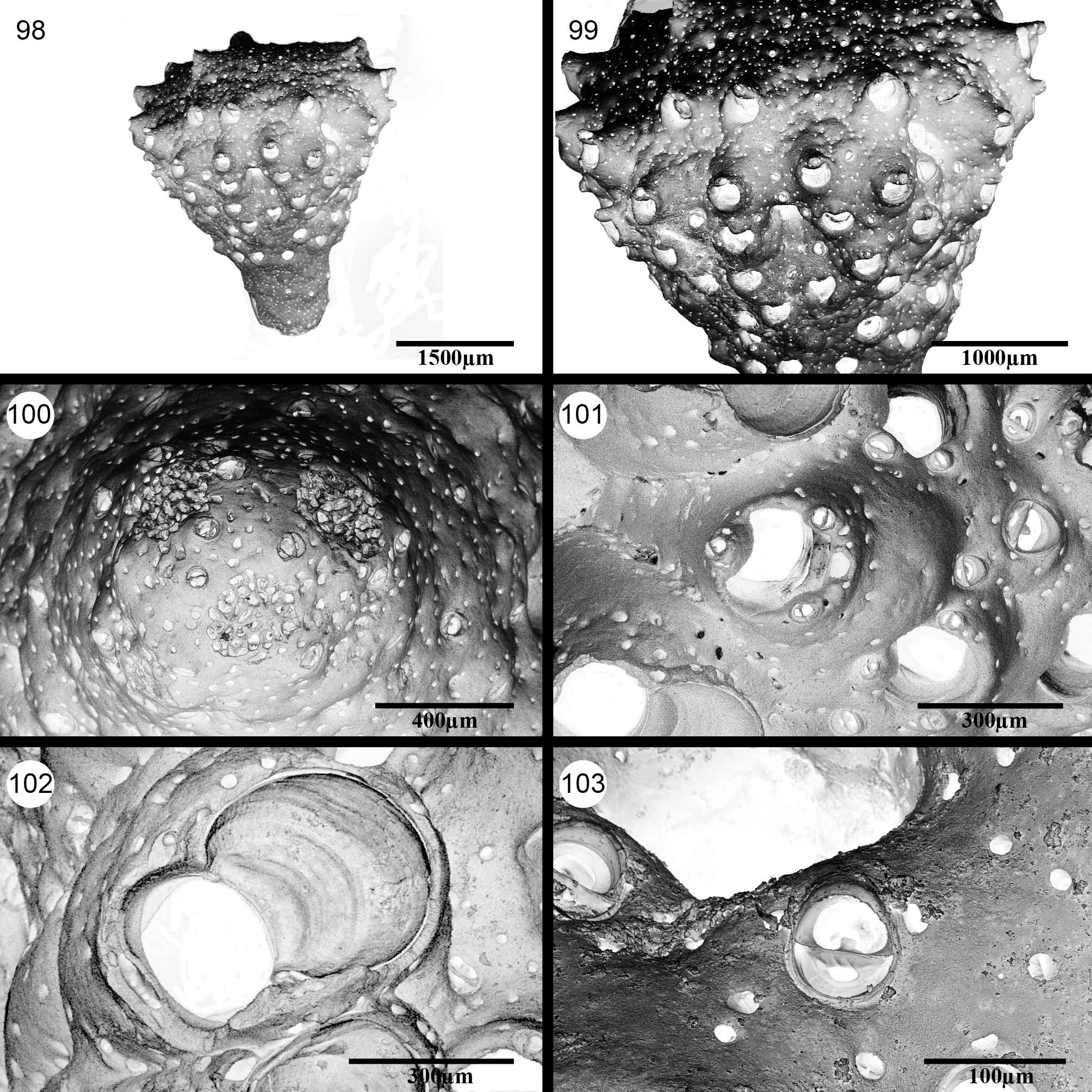