Each of the species of Bryotriton in the northern clade are allopatric with respect to each other, and N. nelsoni can be further distinguished from these species based on model-corrected genetic distances ( Table 2 View TABLE 2 ), being 2.1% (16S) and 9% (cyt b) divergent from its closest relative, N. stuarti , and 2.3% (16S) and 5.4–5.7% (cyt b) divergent from samples from PN Pico Bonito, the geographically closest population, itself described as a new species below.

Description of holotype. An adult male (SVL = 31.9 mm, total length = 68.4 mm) with a slender body and reduced limbs. The head is rounded, slightly broader than the body; nostrils are relatively small (NL/SVL=0.006), and the snout is acutely rounded and of moderate length. Nasolabial grooves are visible but slight, with nasolabial protuberances apparent. The eyes are relatively large and protuberant. The mental gland is not apparent. There are 53 maxillary teeth, 4 slightly enlarged premaxillary teeth in line with the maxillary teeth, and 24 vomerine teeth in two well-defined arches. The limbs are short (CLL/SVL=0.42), with approximately 3.5 costal grooves between the adpressed limbs. The hands and feet are narrow with well-developed digits bearing subdigital pads. The relative length of the digits is I<IV<II<III on the hands and I<V<II<IV<III on the feet, and the tail is longer than the body (TL/SVL=1.114).

Osteology. Based on examination of digital radiographs for the holotype ( Fig. 6 View FIGURE 6 A), Nototriton nelsoni is a typical member of the genus possessing a single cervical vertebra, 14 trunk vertebrae (13 of which bear ribs), and 2 caudosacral vertebrae; a completely fused skull roof formed through contact of the parietal bones; frontal processes of premaxilla fused at point of origin and separate immediately dorsoposterior to origin; preorbital vomerine processes well-developed into a pair of elongate arches each bearing a single row of numerous teeth, extending beyond the outer margins of the choanae; columella absent; phalangeal formulae 1-2-3-2 and 1-2-3-3-2; penultimate phalanges reduced, exceeded in length by terminal phalanges on digits II, III, and IV of the forelimbs and digits II, III, IV, and V of hind limbs; terminal phalanges slightly expanded at distal tips, expansion more pronounced in digit III of forelimbs and digit III of the hindlimbs; mesopodial elements not mineralized. Examination of radiographs of the three paratypes ( USNM 339709–11) generally agreed with those of the holotype; with one paratype ( USNM 339710) demonstrating incomplete fusion of the skull with sutures apparent between the frontal and parietal elements, and a small frontoparietal fontanelle.

Etymology. The specific epithet is a patronym honoring Dr. Cyril “Cirilo” Hardy Nelson-Sutherland, Professor Emeritus and co-founder of the Department of Biology at the Universidad Nacional Autónoma de Honduras, and co-founder and former director and curator of the university herbarium, which was renamed in his honor in 2011. Dr. Nelson devoted his career to studying the flora of Honduras and providing instruction and guidance to generations of Honduran biology students, a career which culminated with the publication of the 1,576-page magnum opus, the Catálogo de las Plantas Vasculares de Honduras, Espermatofitas (Nelson- Sutherland 2008).

Natural history. The holotype was collected as it crawled out of an arboreal bromeliad approximately 1.5 m above the ground on a rainy night. The collection site was at the top of a small peak at the northern terminus of a ridgeline leading to the highest portion of RVS Texíguat, and the overstory was somewhat stunted with a palmdominated understory and a dense covering of epiphytic plants. This species has also been found utilizing rotten logs as daytime refugia, in sympatry with the worm salamander Oedipina gephyra ( McCranie et al. 1993: 387) . The congener N. tomamorum is known from a single specimen collected near a stream just below the locality where the four paratypes of N. nelsoni were collected.

Remarks. A photograph of the holotype of Nototriton nelsoni appeared in Townsend et al. (2012: 98) as “ Nototriton sp.”. FIGURE 1. Bayesian phylogram of the genus Nototriton showing phylogenetic relationships based on analysis of a concatenated and partitioned dataset of fragments of the mitochondrial genes 16 S, cyt b, and COI, with Bayesian posterior probabilities and bootstrap support values from a complimentary maximum likelihood analysis shown above supported branches. 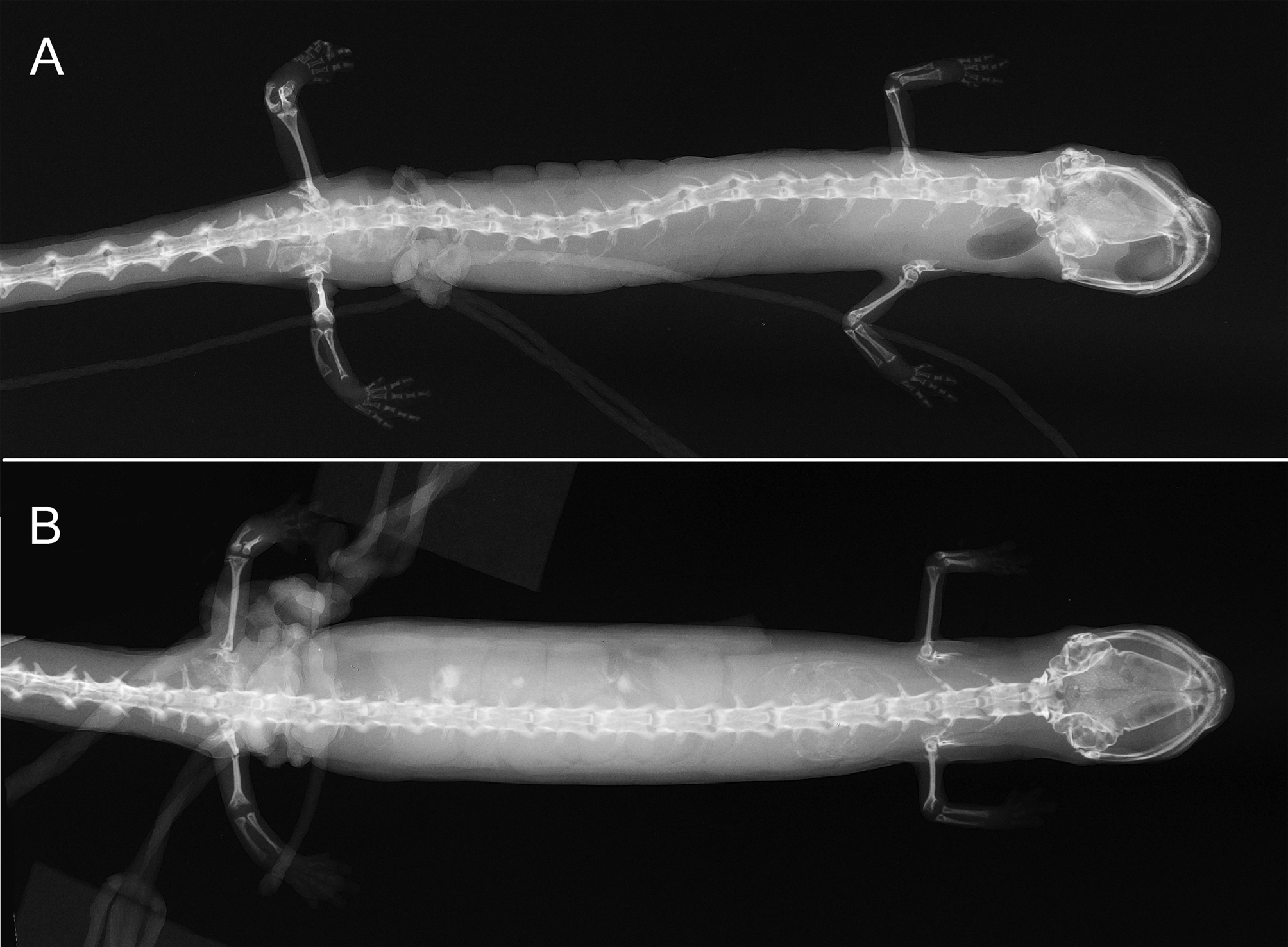