Pigmentation pattern. When alive, the coloration varies with respect to the age and sex of the organism. Mature females show a general brownish coloration with a dark pigmented strip along the body, from the opercle to the hypural plate region that varies in intensity and width. Dark blotches are not evident in big females, but being more evident in the posterior half of the body when present. Scales are frequently rounded in their exterior margin by small black spots. A black blotch is present in the posteroventral region, between the pelvic and anal fins, which varied in depth and width ( Fig. 5 View FIGURE 5. a b). Juveniles have the same coloration than females, but as they reach ± 20 mm they start to differentiate to adult coloration. Juveniles show a brownish translucent coloration with small dark blotches along the body. The fins are clear and unpigmented. Males show a coloration that varies depending on the size and reproductive stage, but in general the posterior half of the caudal peduncle has an orange coloration that extends to the caudal fin, and sometimes some iridescent blue scales are present. The anterior half of the caudal peduncle sometimes possesses blue iridescent scales that frequently extend anterior to the anal fin in the ventral region and to the middle of the dorsal fin, the intensity and coverage of each color is highly variable. Anal, pectoral and dorsal fins can show some pigmentation, being orange to dark coloration. The anteroventral portion of the body is normally with a brown to white coloration, the dorsal region is brownish in coloration, with blue iridescent scales in some males. Sometimes the dark blotch just up to the pectoral fin is present, and also is highly variable in intensity and size, and is less evident than in X. doadrioi . Blue iridescent coloration is often present on the opercle ( Fig. 5 View FIGURE 5. a b). The coloration of preserved specimens varies with respect to fixative and time since fixation, but in general, specimens preserved in 5% formalin show, for females, clear brownish coloration. The blotches are sometimes present along the body, but in bigger females are more evident in the dorsal half of the body, in young females are frequently present along the body. The ventral region is clear. Some females possess silver to dark stripe along the middle part of the body, being more evident in the posterior half. The opercle shows a silver coloration. Fins are unpigmented. Males lose all coloration, the ventral half of the body, including the head and preventral region, and the posterior half of the peduncle show a clear brownish to beige coloration, the rest of the body shows a brownish dark coloration with the darkest coloration around the external part of the scales. Normally fins clear and unpigmented.

Distribution. The species is endemic of the Coahuayana River drainage, being reported only in the middle and upper part of the drainage, in the Tuxpan and Tamazula rivers at altitudes more than 1000 meters above the sea level, all localities within the state of Jalisco, Mexico. The type locality is in a highly seasonally changed Tamazula River, approximately 5 km northwest of the town of Tamazula town (19°43’24.9’’ N 103°12’05’’ W). The new species also has been reported in other locations along the Tuxpan and Tamazula rivers ( Fig. 1 View FIGURE 1 ) near Ferreria, Soyatlan de Afuera, San Rafael, Tuxpan and Atenquique villages, but most of these localities no longer harbour X. lyonsi and it is presumed to be locally extirpated.

Etymology. The name of the species, an adjective, is derived from the name of the prominent North American ichthyologist, Dr. John Lyons, who has made substantial contributions to our understanding of the distribution, ecology, diversity, and conservation status of fishes in Mexico, and to goodeids in particular.

Habitat and ecology. The type locality for X. lyonsi is an area with high seasonal changes in water clarity and volume, from a turbid and deep high flow running water in the rainy season to clear and low flow water other times of the year, sometimes reduced to a few shallow pools in the dry season. The bottom primarily is composed of mud and gravel, and water plants are only evident in the stream bed, which seems to change in composition and coverage depending on the season. The area is totally surrounded by sugar cane plantations. Other fish species collected in the area were Xenotoca melanosoma (now extirpated), Ilyodon whitei ( Meek 1904) , Poecilia butleri Jordan 1889, Allodontichthys tamazulae Turner 1946 , and Astyanax anaeus ( Günther 1860) , as well as the introduced Cyprinus carpio and Oreochromis sp. Nothing is known about its biology in nature.

Conservation. Xenotoca lyonsi sp. n. is known only from a few sites along its original distributional range, and is reported to been extirpated from approximately 60% of the historical localities where it has been reported ( Pedraza-Marron 2011). All the areas where the species originally occurred are highly impacted by human activities, being totally modified for agricultural purposes, with sugar cane plantations demanding high water resources and discharging polluted water from the production process. Also, un-treated urban waste water is a substantial ecological problem in the area. In several recent surveys for the species, it was never located downstream of the village waste water discharges, and, when found, it was always upstream of the discharge sites. Also, the species is not abundant in the few localities from where it is currently known to exist. This species should be considered as endangered of extinction. 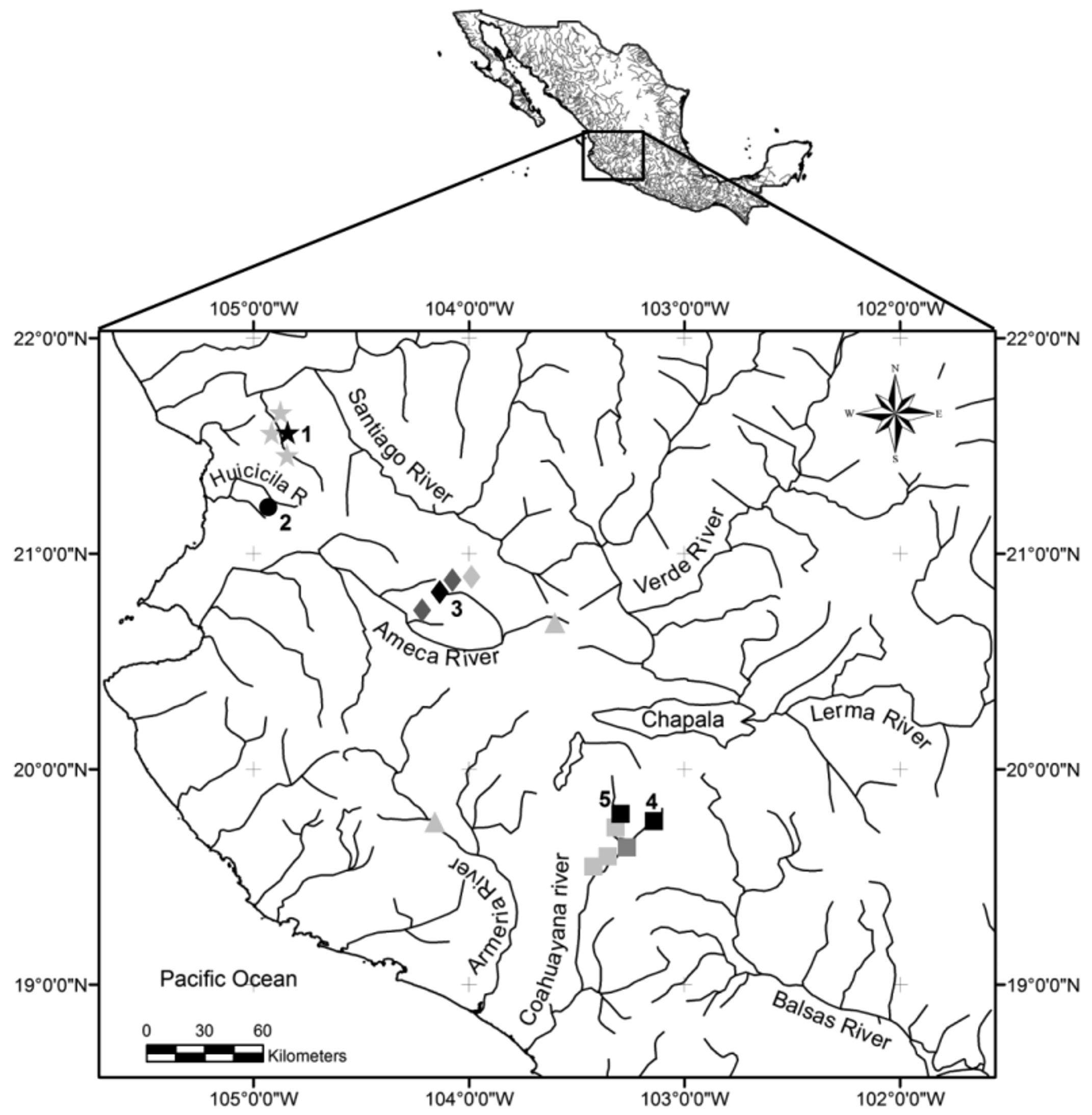 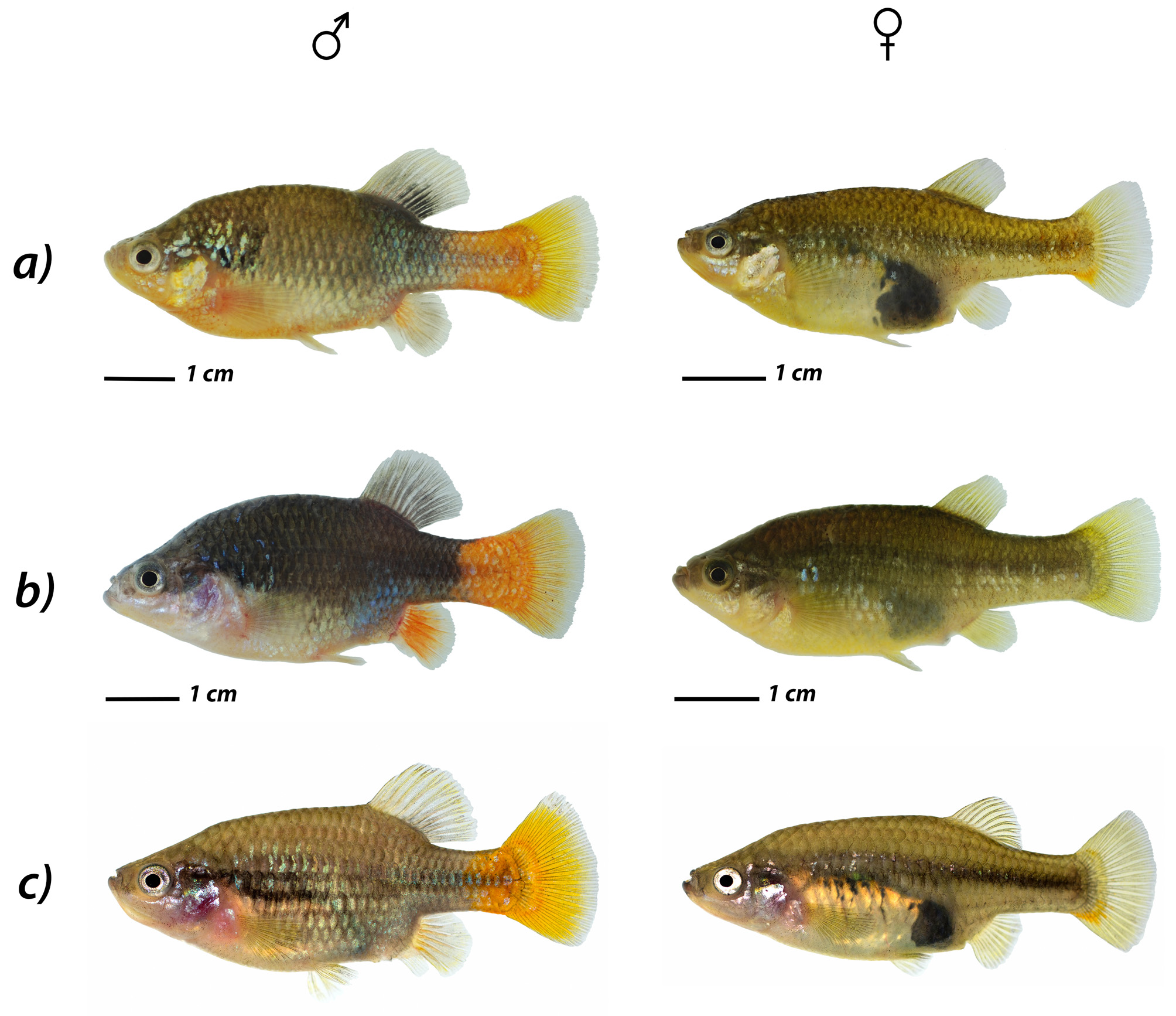