Etymology. The specific name reflects the twisted nature of the facets of the egg, based on the Latin ‘torque’ meaning twisted and ‘ova’ meaning egg.

Diagnosis. Egg double discoid, with 2 or 3 long facets each with many parallel ridges and grooves and twisted around each other, usually appearing as double discoid. First antennae with about 9 lobes in both sexes, second antennae with 12–14 antennomeres. Trunk segments 18. Second clasper with large palp bearing 2 palpomeres. Telson with about 20 spines, divided by telsonic filament insertion into 3 or 4 anterior spines and about 16 or 17 closely arranged spines. Cercopod with about 15 long setae on basal 50–60%.

Carapace ( Fig. 8 View FIGURE 8 A) elongated oval, pelucid, and with about 6 growth lines. Adductor muscle scar at about 45° to carapace long axis.

Only thoracopod III described here ( Fig. 9) though thoracopods IV to at least XV of broadly similar structure. Endites each with numerous anterior ( AS) and posterior setae (PS). Endopod, exopod and flabellum each with posterior setae and naked epipodite. Endite I with about 30 curved (apparently) PS on lateral margin and about 13 straight (apparently) AS on medial margin, varying in size and complexity; the 2 most basal short, stout and each bearing about 5 denticles. The remaining approximately 11 setae of 2 segments, increasing in length towards the centre, and with basal segment stout and longer with setulae on one side, distal segment thin, shorter and plumose. Endite II with about 27 AS and about 38 PS, endite III with about 16 AS and about 18 PS, endite IV with about 13 AS and about 18 PS, endite V with about 42 setae (presumedly PS), 1 row transverse and 1 row apically. Endite V with cylindrical palp almost 1.5 times longer than endite V. Posterior setae similar throughout, long, plumose, of 2 segments, with basal segment generally 35–45% of length. Anterior setae always of 2 plumose segments and varying from ¼ (endite 2) to ¼ (endite 3) to ½ (endite 4) length of PS. Basal segment of AS stouter than distal segment and about 60% of total length. Endopod with about 24 PS, distalmost with basal spiniform projection from the endopod. Exopod and flabellum with numerous (ca. 80–100) presumably PS, most distal group (occupying about half exopod) on exopod with basal spiniform projection. Endopod, exopod and flabellum all long, narrow, each with acute apex. Epipodite fusiform, slightly longer than flabellum. Last few thoracopods very much smaller and reduced in complexity. Other thoracopods of typical structure for Australimnadia, decreasing is size and complexity posteriorly. Dorsal surface of trunk with 1–5 short spines medoposteriorly on asymmetrical mounds on each of posterior 8 trunk segments.

Telson ( Fig. 8 View FIGURE 8 B) with about 20 pairs of dorsal spines on distinctly even convex surface, first 4 well-spaced with anteriormost and 4th larger than 2nd and 3rd. Telsonic filaments originating from mound little higher than dorsal floor of telson positioned at about fourth spine. Dorsal floor of telson posterior to mound sloping steeply posterior to mound, then with slightly concave surface to base of cercopod. About 17 crowded spines posterior to insertion of caudal filaments, increasing in length posteriorly. Cercopods as long as dorsum of telson, basal 50% hardly thinning and bearing about 15 setae 3–4 times as long as basal diameter of cercopods, without terminal spine. Apical 40–50% of cercopods gradually thinning; apical surface covered with very small denticles. Ventroposterior corner of telson slightly protruding but rounded.

Female. Length 10.5 mm, height 7.8 mm. Head ( Fig. 8 View FIGURE 8 G) with ocular tubercle prominent, with compound eye occupying about 50% of it. Rostrum a rounded triangular bulge, little less protruding than ocular tubercle and with basal part occupied by large ocellus, about 60% size of compound eye. Dorsal organ posterior to eye by about half its height, pedunculate and asymmetrical and subequal in height to ocular tubercle.

First antennae ( Fig 8 View FIGURE 8 G) little shorter than peduncle of second antennae, with about 9 lobes each, with many short sensory hairs. Second antennae largely as in male, but peduncle about 3 times rostrum length.

Eighteen pairs of thoracopods of typical Paralimnadia   structure. Trunk dorsum with 1–3 setae on posterior 3 trunk segments, and 5–9 setae on next 5 or 6 trunk segments. Dorsum of anterior 8–10 trunk segments naked.

Variation. Of the few specimens available, those from Mandurah (AM P12429 View Materials ) are slightly different, the main variation is the extra spine in the anterior group of telsonic spines and their close spacing. There is also an extra seta in the cercopod row. It is most unusual among limnadiids for males and females to have similar number of lobules on the first antennae, but all five females examined had the same number as the male, suggesting the male is unusual or the condition is indeed valid.

Distribution and Conservation Status. Both localities are on the sandy Swan coastal plain on the southwest coast of Western Australia. Australimnadia torqueova   sp. nov. might now be extinct, given both localities are now in urban areas and Morley School no longer exists, having been replaced by a shopping complex and huge cemented car park. Furthermore, the wetlands of the Perth area have been well studied post 1980s without rediscovery of A. torqueova   (e.g., Davies et al. 1993; Horwitz et al. 2009). 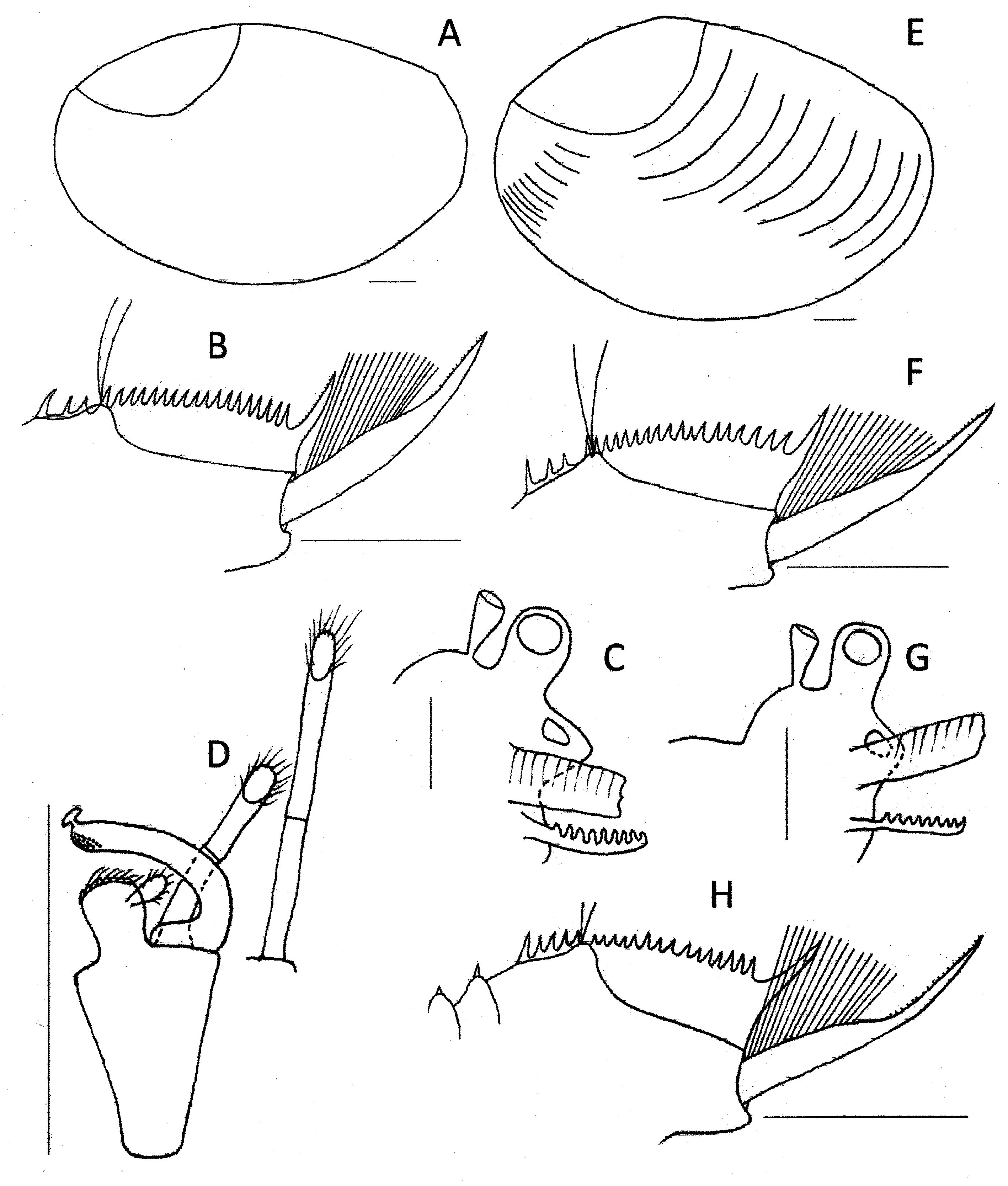