Etymology. The specific epithet refers to the egg which has 8–10 distinct facets each with a few depressions and ridges.

Trunk segments 22. Dorsally, trunk segments XII –XXII each with few short setae or spines on posterior medial edges. Thoracopods I and II modified into claspers ( Fig. 5 View FIGURE 5 J) essentially similar in structure. Palm trapezoidal with minor asymmetrical protrusion situated dorsomedially and near apical club base. Palm terminating in apical club medially and in expanded base of moveable finger laterally. Apical club longer than wide, but with thickening base and lateral insertion of small palp. Club with many short stout spines on terminal half medially and fewer long, jointed spines on lateral half. Moveable finger arcuate, terminating in blunt apex and with apical suctorial organ anteroventrally and rounded pits dorsally (in-situ). Long palp of 2 palpomeres and inserted terminally on palm; clasper 1 distal palpomere little longer than hand, but about twice as long on clasper 2 and 2.5 times length of hand. Distally, both palps with numerous setae marginally on flattened concave apical area. No spines or setae at palpomere joints.

Only thoracopod III described here ( Fig. 6) though thoracopods IV to at least XV with broadly similar structure. Endites each with numerous anterior ( AS) and posterior setae (PS). Endopod, exopod and flabellum each with posterior setae and naked epipodite. Endite I with about 45 apparently PS and about 12 apparently AS on medial margin, varying in size and complexity; 2 most basal short, stout and each with few short setulae; remaining approximately 10 or so setae are of 2 portions, increasing in length towards the centre, with basal portion stout, with few setulae, and with distal portion longer and plumose. Medial surface of endite I with thick row of setae along medial surface near medial margin. Endite II with about 35 AS and about 55 PS, endite III with about 17 AS and about 25 PS, endite IV with about 20 AS and about 20 PS, endite V with about 44 setae (presumably PS), 1 row transverse and 1 row apically. Endite V with cylindrical palp almost 3 times longer than endite V. Posterior setae similar throughout, geniculate, long and plumose. Anterior setae always geniculate and little longer than half PS, otherwise variable between endites: on endites II –IV, portion stout and plumose, but distal portion with cirrus. On endite II, base of cirrus with 3 or 4 pairs of blunt spines laterally, decreasing in size along each seta. Endopod with about 42 PS, distalmost with basal spiniform projection from endopod. Exopod and flabellum with numerous (ca. 80–100) presumably PS, most distal group (occupying about half exopod) on exopod with basal spiniform projection. Endopod, exopod and flabellum all long and narrow, each with acute apex. Epipodite fusiform, about 4/ 5 length of flabellum. Last few thoracopods very much smaller and reduced in complexity.

Cercopod little longer than telson; dorsal and ventral margins almost parallel for about 80% of its length, with final 20% narrowing to sharp concave apex. Basal 80% of cercopod bearing about 40 long geniculate plumose setae dorsally, posteriormost much shorter than others. Distal 20% with cirrus of numerous short denticles dorsally on concave surface.

Carapace ( Fig. 5 View FIGURE 5 B) similar to that of male, but anterodorsal and posterodorsal angles more noticeable while dorsal margin somewhat vaulted; carapace highest anteriorly at about 40% of its length.

First antenna ( Fig. 5 View FIGURE 5 D) little longer than peduncle of second antenna and with about 9 sensory lobes of similar size. Second antenna as in male.

First 15 thoracopods all broadly similar to one another and to thoracopod III of male. None with endopodal palp. Remaining thoracopods serially smaller and reduced in complexity. Thoracopods on segments IX and X with long epipodal filaments to hold egg mass.

Variation. In other specimens of Australimnadia multifaciata   sp. nov. examined, some variation (ca 5%) in meristic characteristics was noted, as is often the case in clam shrimps ( Straškraba 1966) e.g., lobules on the first antennae numbered 14 rather than 15 in some males and eight rather nine in some females; antennomeres sometimes differing by one from the 12 and 14 stated, one male had 23 trunk segments instead of 22; telsonic spines varied from 21–23, and cercopod setae were always numbered near 40 (see below as this latter number is an important difference between A. multifaciata   sp. nov. and A. grobbeni   ).

Remarks. The two individuals studied of Australimnadia multifaciata   sp.nov. had identical COI sequences. Uncorrected p -distances between A. multifaciata   sp. nov. and A. grobbeni   were 11.3 % for COI and 0.07 % for EF1a. None of the translated amino acid sequences featured stop codons or any amino acid substitutions.

Distribution and Conservation Status. Australimnadia multifaciata   sp.nov. is known only from its type locality, a roadside pool 19 km south of Onslow, on the delta of the Ashburton River on the Pilbara coast. There are many turbid clay pans in the area, but only this deeper pool with clearer water harbours A. multifaciata   sp. nov. It is possible the site is a singleton and given this species was not encountered in an intensive survey of the aquatic resources of the Pilbara ( Pinder et al. 2013), A. multifaciata   sp. nov. could be a rare species and critically endangered according to ICUN criteria. The recent industrial development near Onslow nearby is of concern. 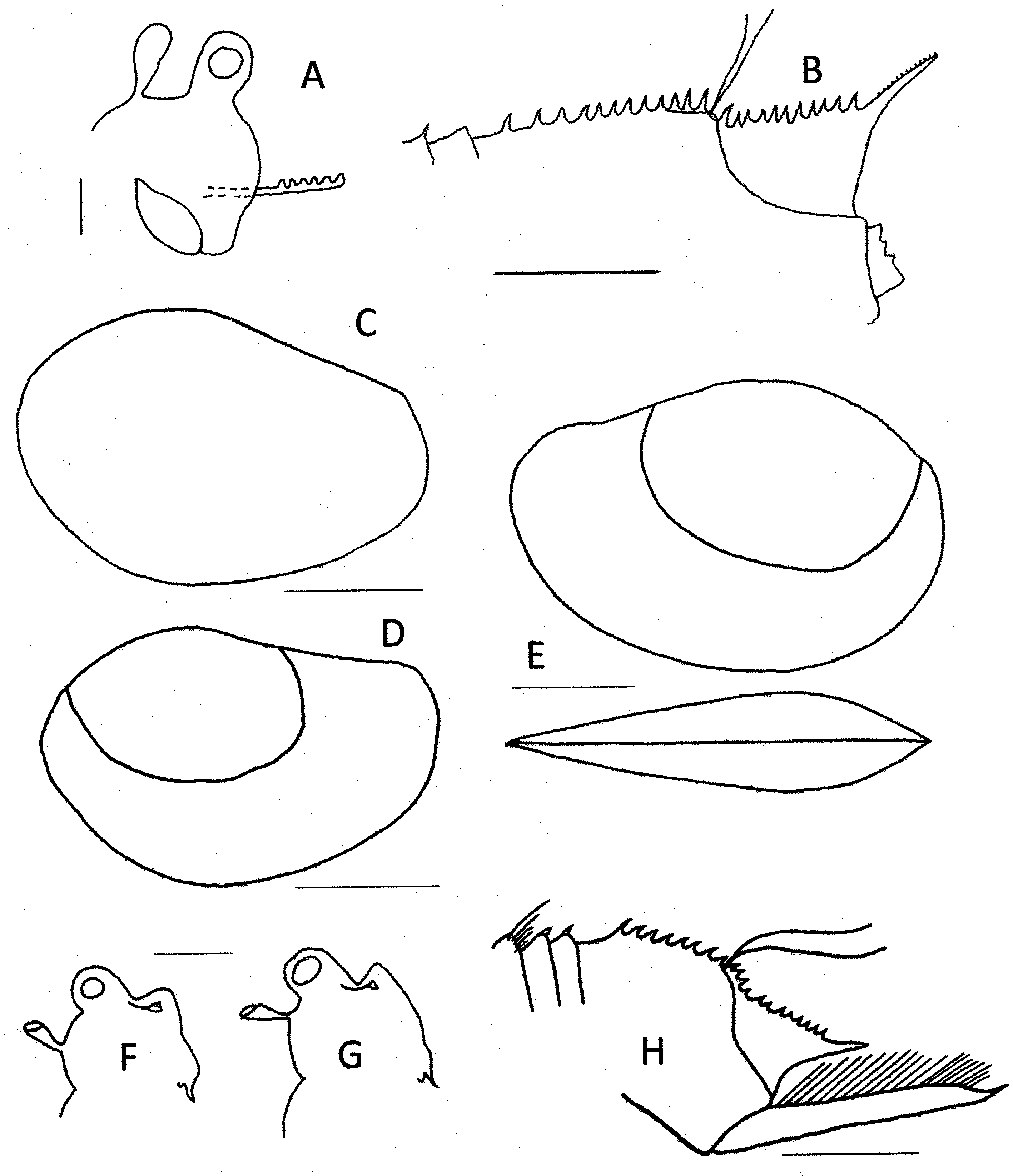 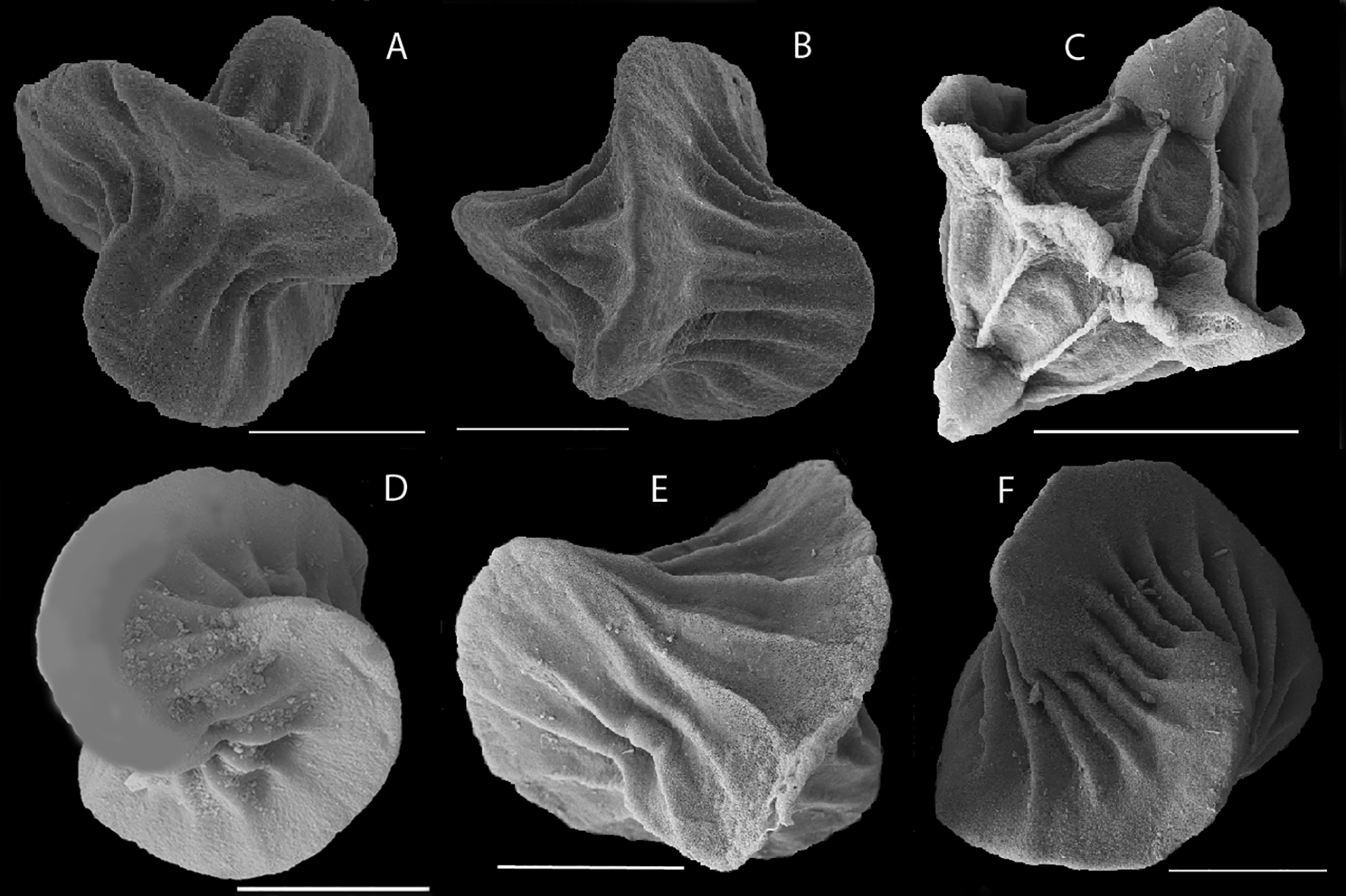 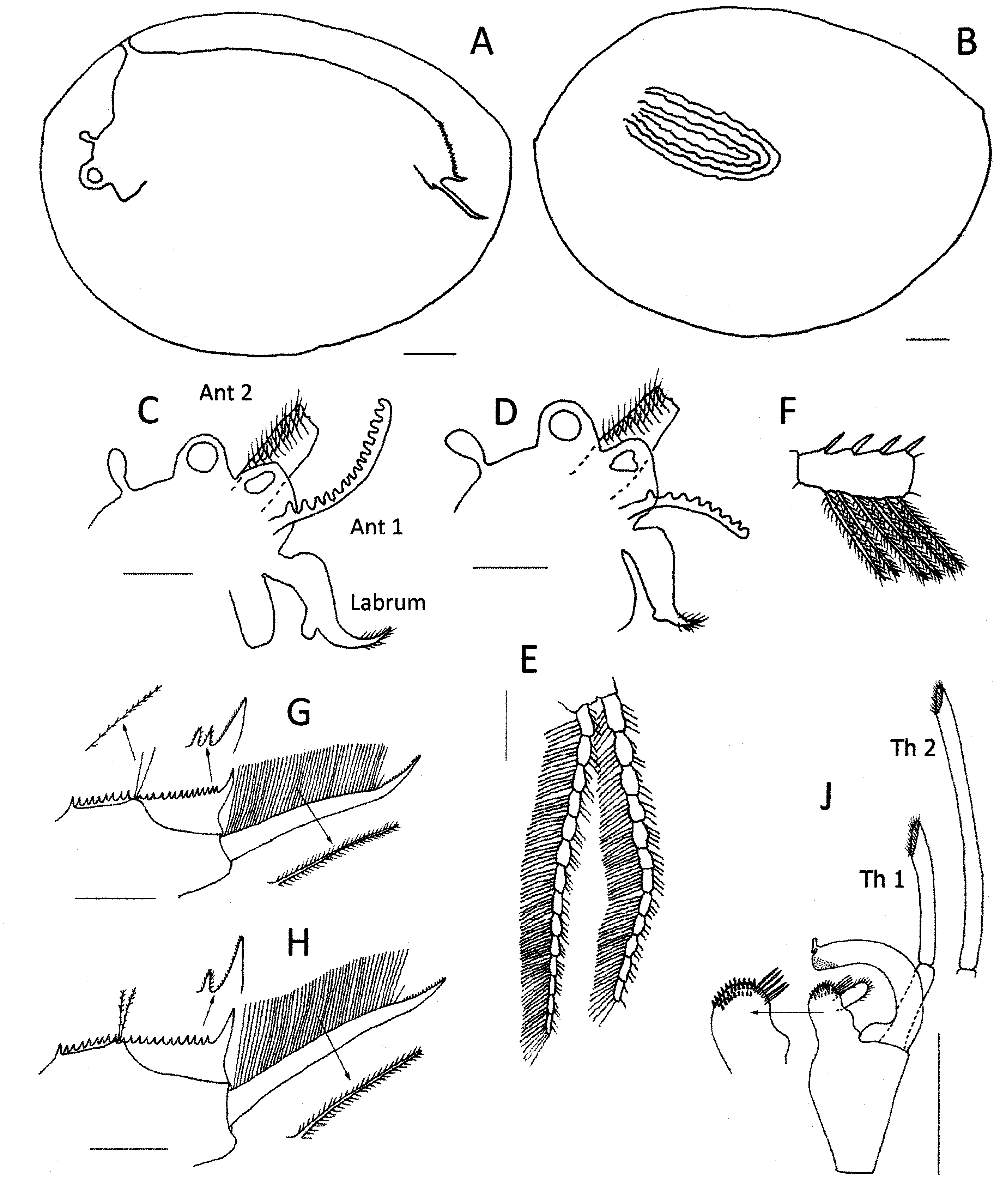