statistical differences among all subspecies pairs are not listed).

Specimens of S. taenicauda   (assigned herein to S. t. taenicauda   ) held in the collections of the Queensland Museum ( QMJ 13491 View Materials – QMJ 13506 View Materials ) and the Australian Museum (AMR 5840 –AMR 5842) are said to come from 'Cardwell, N.E.Q.', a locality that is around 600km north of the known range for this species. Examination of the Queensland Museum collection registers shows that this material was initially part of a series of 26 specimens registered on the 26 th July 1912 as QMJ 180 and that at the time of registration three of these were sent to the Australian Museum as an exchange. Sixteen of the Queensland Museum specimens were subsequently re-registered as QMJ 13491 View Materials – QMJ 13506 View Materials (1 st November 1965) and no explanation was given as to the whereabouts of the remaining seven specimens in the series; presumably they were lost or discarded because of poor condition. The entry for QMJ 180 states that these specimens came from the 'old collection' but no earlier records can be found to show when they were first acquired by the Queensland Museum. A disparity exists in the 'locality' data between the 1912 registration and the subsequent 1965 re-registration. In 1912 the locality is given as 'Cardwell' but in 1965 it appears as 'Cardwell, N.E.Q'. The register entries provide the coordinates for the town of Cardwell in north-eastern Queensland (- 18.27 °, 146.02 °) but in both cases these have been written in a different hand and added at a later date. That 'N.E.Q' first appears with the 1965 register entry strongly suggests that the author of this entry assumed that 'Cardwell' referred to the town in north-eastern Queensland and casts doubt as to the geographic origin of this material. We believe a more likely collection locality is Cardwell Station (- 27.365 °, 151.4044 °), southwest of Bowenville. Cardwell Station lies within the known extent of occurrence for this species and there are five confirmed records within 30km of this site since 2000 (A. Borsboom pers. comm., 2011). Habitat data provided by the Queensland Department of Environment and Resource Management ( DERM) further supports this view. Within a 10km radius of Cardwell Station, there is habitat (Regional Ecosystem 11.3.2; Sattler & Williams 1999) that, in a recent conservation assessment, was thought to have a 'medium probability' of supporting this species ( Borsboom 2006) and from which other specimens of this species have been recorded (see Appendix 1). The town of Cardwell in north-eastern Queensland, however, lies within the Wet Tropics bioregion and does not support any Regional Ecosystem type that has been described as suitable habitat for this species.

Tail with dorsal golden-yellow stripe ( Fig. 13 View FIGURE 13 A); stripe 2–4 scales wide at the narrowest point; stripe most commonly ceases at the level of hips but may extend to nape (becoming narrower cranially); stripe may be discontinuous when extending anterior from the hips; distal tip of tail golden, both dorsally and ventrally; proximally, stripe margins are undulating, becoming more deeply undulating distally; the majority of distal undulations form transverse golden bars reaching the ventrolateral margin; adjacent to undulating margins and between the transverse bars, the scales are black with randomly scattered silver white spots; ventral tail silver-grey with scattered black spots (1 scale wide); mouth colour blue; eye colour in life red to red-orange. In spirit, body colouration is similar but the tail stripe is yellow to tan, and eye colouration may be chestnut brown.

Genetics. Strophurus t. taenicauda   differs in ND 2 sequences from the other two subspecies at between 5.87 and 6.78 % of sites ( Table 2). Average intrasubspecific sequence divergence is 0.21 % ( Table 2).

Habitat. Strophurus t. taenicauda   occurs in a wide range of habitats in the Southern Brigalow Belt bioregion. This habitat is typified by the presence of Acacia harpophylla (Brigalow)   , Casuarina cristata (Belah)   , Allocasuarina luehmannii (Bull Oak)   , Eucalyptus crebra (Ironbark)   and Callitris glaucophylla (Cypress)   ( Fig. 14 View FIGURE 14 A). Habitat types (and status) recorded for this subspecies are listed in Appendix 1. These have been determined by plotting localities for museum specimens and sight records against Queensland Department of Environment and Resource Management Regional Ecosystem mapping ( Sattler & Williams 1999).

The habitat types recorded support the association of this subspecies with brigalow scrub, but with additional use of other habitat types. Some of the Regional Ecosystems in which this subspecies is found are currently listed as "endangered" or "of concern". This subspecies appears to be predominately arboreal, being most commonly found at night foraging on the trunks and outer branches of trees and on the ground amongst leaf-litter or ground debris. It shelters during the day beneath loose bark in standing trees, particularly under dead bark on small saplings, and in tree hollows. Its cryptic colouration allows it to rest on exposed saplings and tree trunks, usually in a head-down position. The species has been observed to co-occur with the following gecko species: S. williamsi, Gehyra   variegata, G. dubia, Oedura marmorata   , O. monilis   and O. tryoni   .

Distribution. Strophurus t. taenicauda   was formerly considered endemic to Queensland, but is now known to also occur in New South Wales (see below). It can be locally common in appropriate habitat but this habitat is restricted and fragmented. It is currently found throughout the southern Darling Downs from Cecil Plains to St George and as far south as the Queensland–New South Wales border ( Fig. 15 View FIGURE 15 ; but see below for additional NSW record). It formerly extended further east but is now excluded from many areas by extensive habitat destruction. The species extends north to Allies Creek in the east and Carnarvon NP in the west.

On 7 November 1998, three S. t. taenicauda   individuals were found under loose bark in the vicinity of the Rocky Creek Bore Camp Site (- 30.7274 ˚, 149.133 ˚) in the Pilliga Scrub region, NSW (Michael Banicek & Brian Lazell pers. comm. 2009). These were photographed and subsequently released ( Fig. 16 View FIGURE 16 ). As far as we are aware, this represents the only record of this species outside of Queensland, and represents a significant range extension (> 250km) for the nominate subspecies.

In the northwest region, from Injune to the Salvator Rosa region of Carnarvon NP, the appearance of the specimens ( QMJ 15541 View Materials – 42, QMJ 47954 View Materials , QMJ 69670 View Materials , QMJ 86304 View Materials ) is different with smaller dorsal body spotting ( Fig. 12 View FIGURE 12 B) but retention of expected eye colour (red) and tail patterning (single tail stripe with undulating margins or transverse extensions). In this area there is also a potential overlap with S. t. albiocularis   ssp. nov. It is unknown if this represents an aberrant form of S. t. taenicauda   , a possible fourth subspecies, or geographical intermediates between S. t. taenicauda   and S. t. albiocularis   . We were unable to extract viable DNA from the preserved specimens, so they did not form part of the genetic analysis. Further specimens from this location need to be examined before any conclusions can be drawn. 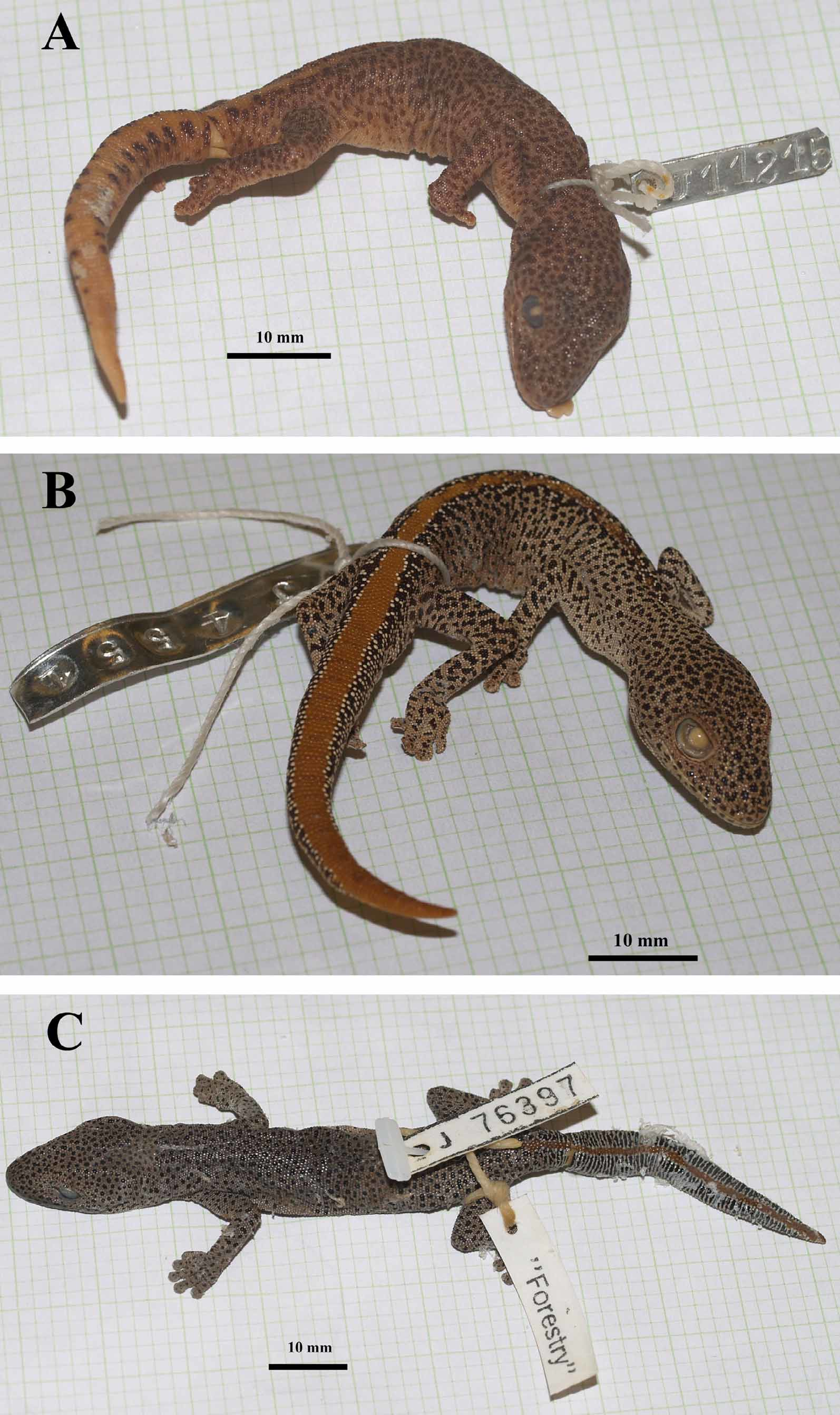 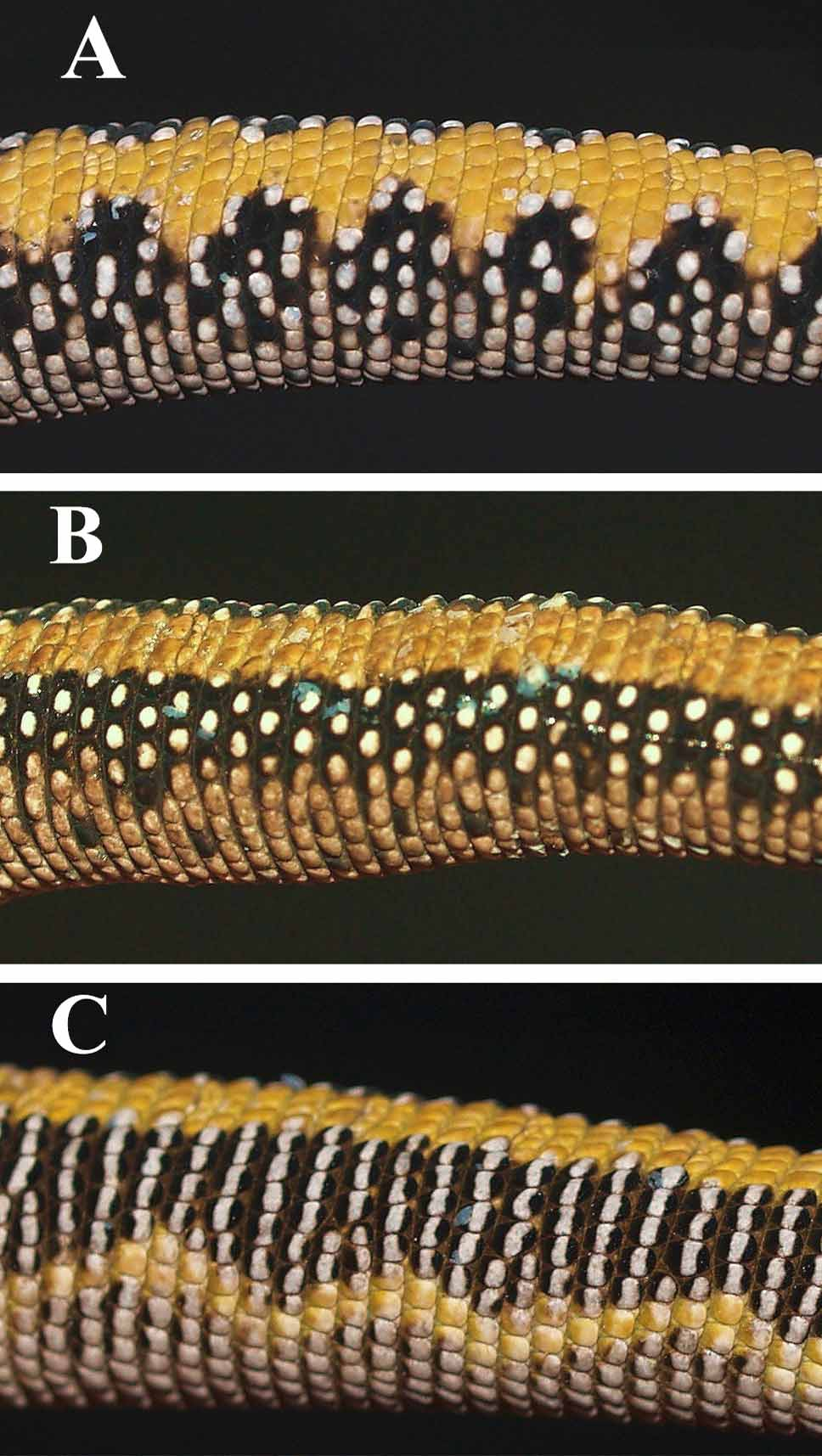 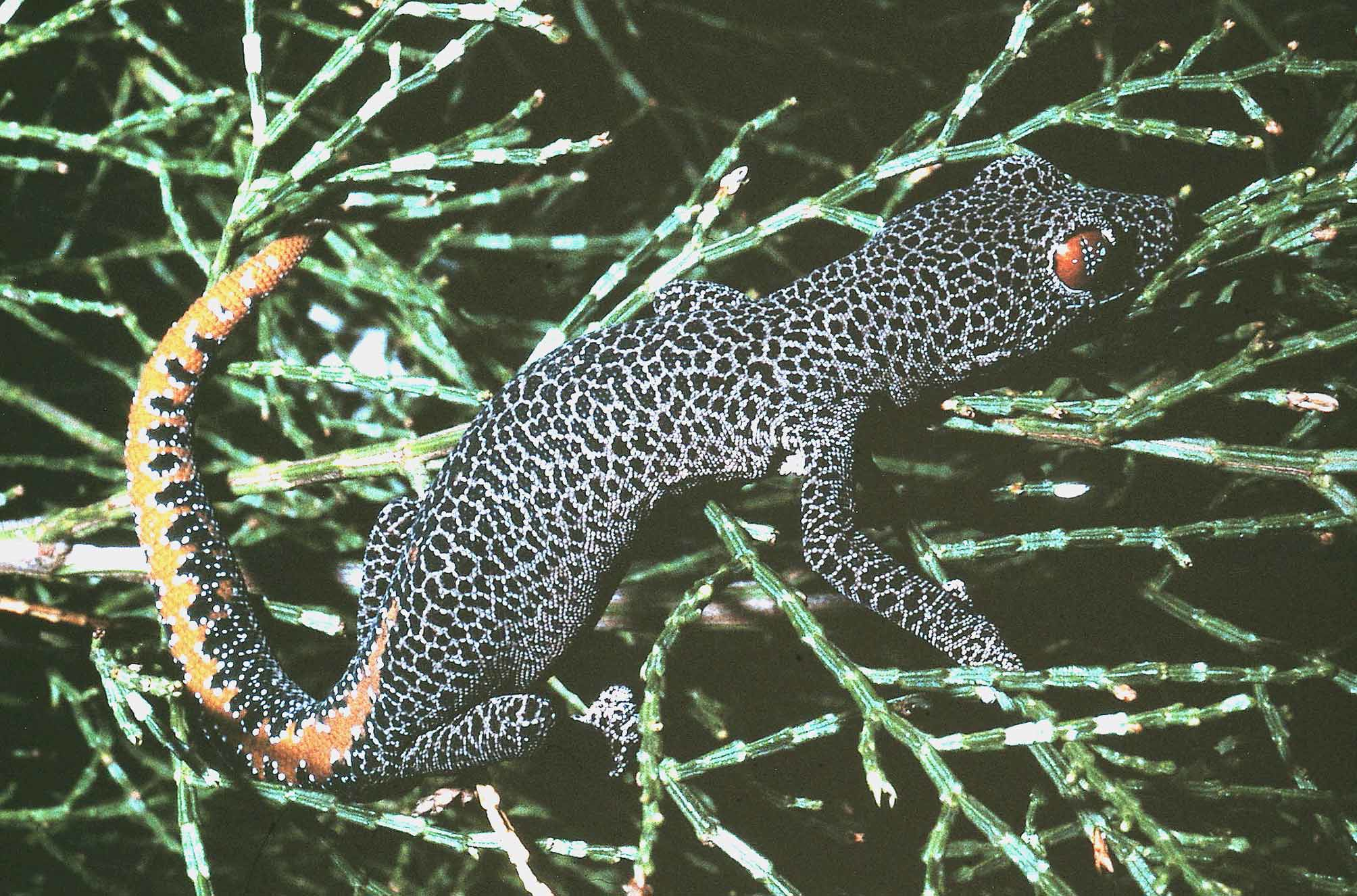