Hydranth body wall with a simple squamous epidermal epithelium, mostly constituted by epitheliomuscular and interstitial cells (cf. Thomas & Edwards 1991, for Hydra sp. ). Gastrodermis composed of nutritive muscular cells with feeding vacuoles and gland cells secreting digestive enzymes dropped into gastrovascular cavity. Hydranth gastrodermis divided into two distinct regions in a longitudinal section through oral­aboral axis. Upper gastrodermal region, near hypostome, with few or no gland cells. Basal gastrodermal region rich in gland and storage cells, both columnar and staining red, with granules and vacuoles concentrated on gastrovascular side, sometimes with zymogen granules stained bright red, depending on state of satiety of hydranth or other factors, such as age of hydranth. Desmocytes located on an outgrowth of hydranth tissue fold, connecting hydranth coenosarc to perisarc just above diaphragm.

Mesoglea gelatinous, noncellular, thicker on hydranth body and hypostomal region, indistinctive in other tissues (epidermis and gastrodermis) on other parts.

Due to staining methods applied, there was no evidence of sensorial and interstitial cells.

A gastrodermis divided into two regions (viz. an oral region with no or very few gland cells and another median­aboral region rich in gland cells) has been used to justify affinities between Haleciida and Plumulariida, the order in which T. ramosus is included ( Bouillon 1994). These two regions are possibly related to prey capture, ingestion and digestion, in which mucous from both epidermis and gastrodermis is involved in the “swallowing” process (cf. Hyman 1940; Thomas & Edwards 1991). Upper­aboral gland cells had no granules because no digestion occurs in this region.

Traditional taxonomy has in the past assigned the genus Thyroscyphus to the family Sertulariidae (cf.. Bouillon 1985). However, the taxonomic placement of Thyroscyphus is in dispute. Calder (1991: 79) emphasized characters such as the presence of a pedicel, annular diaphragm, ectodermal lamina lining the inner surface of the hydrotheca and, especially, the presence of an annular fold at the base of the hydranth instead of an abcauline diverticulum to reaffirm the existence of the family Thyroscyphidae Stechow, 1920 . However, an ectodermal lamina lining the inner surface of the hydrotheca is a character also present in some Aglaopheniidae and Sertulariidae ( Bouillon et al. 2004) . Nevertheless, the family has been adopted in recent studies by different authors (cf. e.g., Schuchert 2003; Bouillon et al. 2004).

The material studied herein exhibits the same general morphology already described for the species (e.g. cf. Migotto 1996: 80, fig.15 View FIGURES 9–20 a­b), although detailed morphometrical studies have never before been carried out for the genus. The colonies tended to exhibit high morphometric plasticity. In Brazilian material, Migotto (1996: 80) noticed slight differences in the dimensions of the hydrothecae and pedicels between specimens from NE Brazil (Bahia state) and SE Brazil (São Paulo state). This was inconclusive from our data, with dimensions overlapping in hydroids from the many studied sites.

Atlantic specimens of the species all seem to be rather similar. Materials from Brazil and the west coast of Africa ( Vervoort 1959) in the South Atlantic differed only in the habit of the colony. They were slightly geniculate in our material, while dimensions of the hydrotheca (both height and aperture diameter) were larger in African material. Vervoort (1968: 33), reported that female gonothecae in materials from the Caribbean had a “circular lid on the apical portion” which developed an opening for acrocyst protrusion. We were not able to detect such “lids” even in SEM studies; the periderm entirely and continually covered the reproductive structure. The overall shape of the gonothecae suggests that our fertile material was female. Although the development of a lid or operculum at a later stage is possible, we did not study the development of the gonophore or determine the presence of an acrocyst. Venezuelan material studied by Vervoort differed from ours in the larger height and aperture of hydrothecae and the shorter internodes.

Splettstösser (1929: 1–70) provided a detailed account of the morphohistology of various species of Thyroscyphus (including T. ramosus ) collected from different tropical localities in the Atlantic, and highlighted no significant differences between them. From Splettstösser’s data, Thyroscyphus fruticosus seems to resemble T. ramosus but all measurements of the hydrotheca in the former were larger than those of the latter except for pedicel length.

Splettstösser (1929) described a so­called “ectodermal revetment” inside the hydrotheca of T. ramosus , with small and large “bean­shaped” nematocysts. The general dimensions of Splettstösser’s material are similar to ours – the only differences are the shorter height of the pedicel and the larger diaphragms reported by him. Surprisingly, Splettstösser described large macrobasic mastigophores in the gastrodermis of the gonophores, the same type present only in the epidermis of the hydranths. We found no nematocysts in both tissue layers of the gonophores, the epidermis and the internal gonadogenic cells. An epidermal lining inside the wall of the gonotheca, well separated from the epidermal layer of the blastostyle, is mentioned and illustrated by Splettstösser (1929). This feature is known in the development of other species of leptothecates (e.g. Gravier­Bonnet & Migotto, 2000 and references therein). The epidermal lining may withdraw during final stages of gonangium development, possibly explaining its absence in our material. The only account describing formation of the acrocyst and brooding of the eggs in the reproduction of T. ramosus is that of Splettstösser (1929).

We were not able to study other species of Thyroscyphus recorded from Brazil by Mayal (1973, 1983). According to Mayal’s description, these species ( T. torresii , T. vitiensis , and T. marginatus , the latter described as Campanularia marginata ) differ considerably from our material. Hydrothecal height and aperture diameter as given by Mayal (1973, 1983) are larger in T. torresii and smaller in T. vitiensis than in our material. Moreover, colonies of both species are smaller than those of T. ramosus and the hydrothecal rims of both are smooth and lack cusps. Although we studied T. ramosus from five of the nine states in NE Brazil, including Pernambuco (sampled by Calder & Maÿal 1998), we found no representatives of any other species of Thyroscyphus . Notably, almost all samples studied by us were from intertidal (tide pools) or shallow water habitats and that limitation may have prevented us from finding other species of Thyroscyphus . The other previously reported species were from deeper waters, viz. T. marginatus from 9ñ 35 m ( Vannucci, 1949; Mayal, 1983), T. torresii from 14ñ 80 m, and T. vitiensis from 14ñ 24 m (the last two recorded by Mayal, 1983).

A correspondence analysis was undertaken to test morphometrical cohesion of populations along the Brazilian coast. Materials from eight different sites across a distance of ca. 4,000 km along the coastline were not clearly distinguishable ( fig. 29 View FIGURE 29 ). No gradients of any kind were apparent and no geographical patterns were observed in the studied materials.

A few samples (dotted circles in the graph) were relatively distinct from others. These differences were attributed to unusual dimensions in one or more parameters of these specimens, sometimes reaching three times larger than the mean value of the parameter. Specimens from Caraguatatuba were the most scattered in the graph, mainly due to the larger size of the pedicel in many individuals (viz. standard deviations in table II). However, once combined in the same cloud with the remaining specimens, we conclude that intraspecific variation in Brazilian T. ramosus is pronounced. The differences do not morphometrically characterize diverging lineages, and they do not correlate geographically.

Comparison of the parameters separately (table II) indicates small variations in size. Such variations are probably related to distinct local/microhabitat conditions such as substrate, water current, luminosity, and salinity rather than geographical localization or latitudinal variation. Unfortunately, most of the material studied belonged to previous collections with no records of abiotic conditions, and no further assessment of the possible impacts of these factors on morphology is possible. FIGURE 29. Correspondence analysis graph for morphometrical parameters of specimens of Thyroscyphus ramosus from different localities along the Brazilian coast. 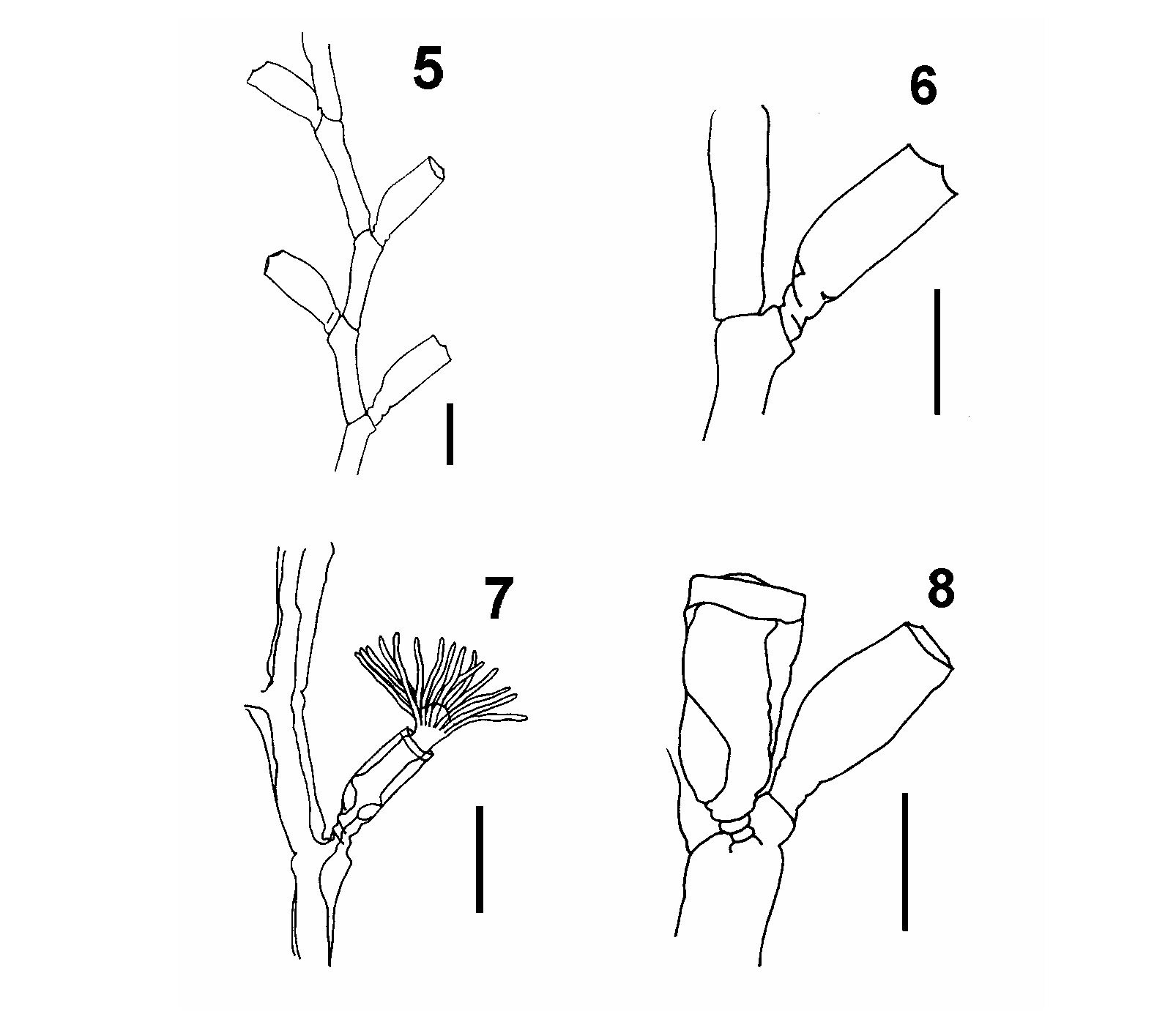