Descriptive notes. Head-body 35-40 cm, tail 15-21 cm; weight 1-5-3 kg. The tail is over half the head and body length. The Large-toothed Ferret-badger has a small, slender body and a long snout. The pelage is coarse, thick and short, and varies from fawn brown to dark brown. The sides of the body are heavily frosted white, contrasting slightly with the darker back. The white stripe on the back of the neck extends at least to the middle of the back, and often as far as the base of the tail. The head has a distinct pattern of black (or dark brown) and white patches, which varies among individuals. The bushy tail is pale and usually white on the distal half. The sagittal crest on the skull is large and low. Dental formula: 1 3/3, C 1/1, P 4/4, M 1/2 = 38. The teeth are larger than Small-toothed Ferret-badger, especially P*. In the upper jaw: P* length over 8 mm; P' is significantly smaller than P=.

Habitat. Reported to live in forests, grasslands, and agricultural areas.

Activity patterns. Reported to be nocturnal. Rests in underground burrows or under rocks during the day.

Movements, Home range and Social organization. Believed to be solitary. Mainly terrestrial, but also said to be an agile tree climber.

Breeding. Litter size is reported to be up to three, with the young usually born in May and June.

Status and Conservation. Classified as Data Deficient in The IUCN Red List. Very little is known about this species and field studies are needed to learn more about its natural history, ecology, and conservation status. In Laos and Vietnam, there is often some confusion between Small-toothed and Large-toothed Ferret Badgers, so careful distinction between these two species needs to be made in these two countries. 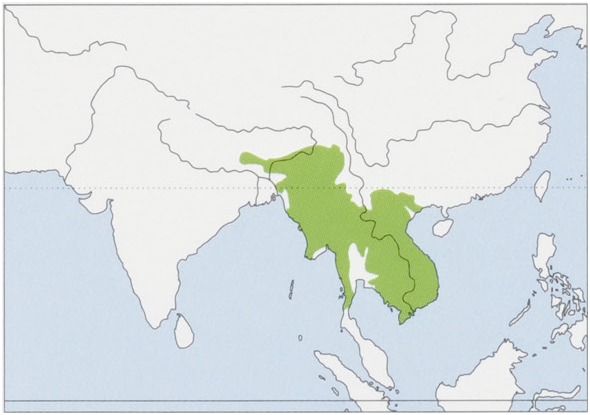